"Easy" Day at Work or at least no teaching was involved

A trip to the Flynn to see Beakman on the Brain started out my work day.  I expected it to be highly entertaining as well as informative which it was.  To prep the students for this performance I showed a few You Tubes about Phineas Gage as suggested in the teachers' manual from Flynn Theatre.  I thought the students would be fascinated by this story and found  a book to go along with it.  The You Tube that I showed the whole thing of was a cartoon made by some college students and it was very well done. I watched everything thoroughly before showing to make sure they were appropriate.  Well, I may not be a teacher that makes kids cry but apparently I am a teacher that makes kids vomit.  One kid told me he was sick so I sent him to the clinic. I thought he had a virus.  This morning I had an email from his dad telling me "O" didn't want to come to school and go to the Flynn because the You Tube video had made him vomit.  I had no idea!  The dad wasn't criticizing, he was just letting me know.  So I talked to O before we went and ended up sitting him between myself and our class foster grandmother. I joked with him about the usher thinking he must get into a lot of trouble to be between two adults.  We talked about how he could hide between his fingers if needed.  I told him I used to do that when the witch appeared in the Wizard of Oz and he said he did it for the third Star Wars movie.  Nothing like bonding with your student over movies that scare you. Well, he did hide behind those fingers but only briefly.  The part about Phineas Gage was a puppet show and very tame. (It is a great story - you may want to google it.) He laughed hysterically throughout the performance. The humor from Beakman fit him to a T.  So yeah, I made him vomit but I gave him a good time too.

Beakman also gave quite a good talk and demonstration on the importance of wearing a bike helmet.  My colleague passed a message up to me how important it was to wear one even when running. Ha Ha.

On the post about my smarts while wearing a bike helmet while running here is one comment:


Chris K said...
Aren't you in charge of teaching the youth of America? Yikes. :-)
"Well, yes, Chris, I am and I am still doing just wonderful things for the future leaders of America." 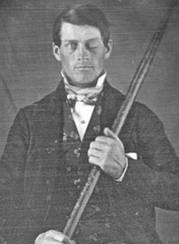 Phineas Gage holding the tamping iron
that pierced his head. 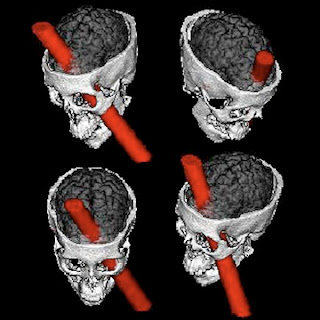 Showing how the tamping iron went through
from different angles.  Wouldn't you think
this would fascinate 9 year old boys?

Then we got back to school for lunch and recess followed by taking a walk around town to Green Up. Tough day all around!
Posted by ajh at 9:39 PM

The Phineas Gage story is one of my favorites from intro psych :)

Some kids are just more sensitive than others. I once took a group of boys to the movies to see The Perfect Storm and it caused a lot of emotional turmoil in one of them. I figured that cause my kids were fine with it most kids would be. I was wrong!

You knew I was kidding, right? Please say yes, because I so was. You teased yourself, so I couldn't resist. I am sure you that are a wonderful teacher.

Oh, you make me laugh! I think that story would make me want to vomit, too...

Cool story and we are sure you are absolutely fabulous with the kids - if we had any, we would hope they were in Mrs H's class!!! The new header photo is awesome too!

Actually, I think that story is really interesting!! I'm sure the kids loved it. I love the new header, too, your kids are so big!!
Happy Mother's Day!

At least the dad wasn't critizing....you know how many dad's I encounter who tells me "I" am failing his child?

Happy Momma's Day to you!!!

Those pictures are pretty gruesome! Sounds like an interesting story though.

I didn't remember the name but as soon as I saw the pictures I remembered the story.

I am ALWAYS on my students about wearing bike helmets. Last year, they had a great lesson on how easy it was to fall off a bike--even their teacher did it.

You are a great teacher!