Corporate Cup 5K and Girls on the Run

This has been a couple of days of really fun races.  Thursday night I ran in the Corporate Cup with friends and had a blast BUT I just get slower and slower! Today I watched the Girls on the Run and had just as much fun as when I race.
First the Corporate Cup 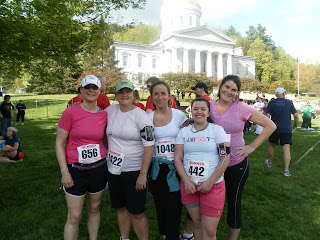 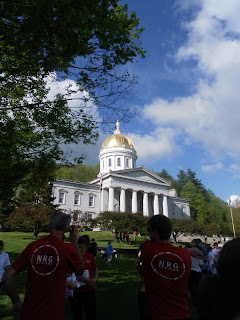 It has been raining all week but it was wonderful weather for this event!  A bit muggy but nothing terrible.
We had two teams running from my school.  Rumor had it there were 2800 runners/walkers in all.  There were certainly a lot of people and I had envy over the t shirts many of the teams had chosen. I guess when you work for a non profit no one buys you matching t shirts. Get over it AJH. That is reality. 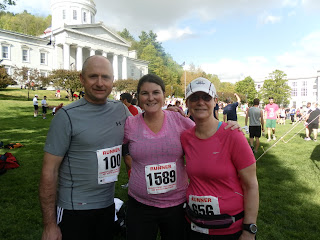 Before the race - Our Team
The best part of the night was how much fun the new runners from my school had.  I have to say one runner who didn't come to the Sunshine Run but was able to come to this race may have picked the wrong one. She likes trails and running alone.......not exactly the atmosphere last night. But she is always a good sport and still had fun.  She questioned my sanity at liking being amongst hundreds of runners.  I have to say I think I can blame a little bit of my time on the weaving and crowd that went on all race but particularly in the first mile. It was nuts. But I do love big races. The trouble is in a 5K it is hard to make up the time the crowd makes you  lose. My grade level colleague LOVED racing (she did no preparation whatsoever) and wonders how she can increase her time with the same level of non preparation in the future.
I think some of us are going to do the Komen Race for the Cure in July.  I will have to see as I need to go to Ironman Lake Placid to spectate or my life won't be worth living. I think I can fit both in though.
The Corporate Cup is a  fun race that crosses the river 4 times once on a bike bridge that gives you motion sickness as everyone crosses.  I loved seeing the runners ahead of me crossing the bridge, the sight of it is inspiring. Some of it was on small back streets through my state's capital.  There were a lot of people there to watch. One of my students told me she saw me on the news.  (Crossing the finish line first of course) 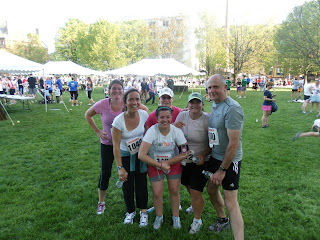 Our goofy I did it picture 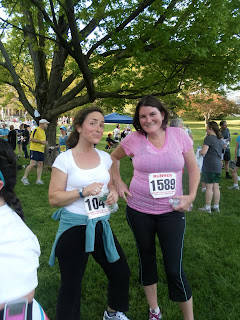 Don't they look like they enjoyed it/
I don't know any of my mile splits because my Garmin stopped working! It never does that. Oh well. It's fine now. I think sometimes it gets turned on in my bag and loses it's power because it was on 0% charged even though it had been fully charged.

My pace was slower than my hilly 5K last weekend and my overall time was 29:10.  I have never been in the 29s for a 5K.  I will just keep working on it.  In spite of that it was an exceedingly fun race.
Girls on the Run 5K
Today I got up much earlier than I usually do on a Saturday and went for an 8 mile run. I wanted to fit it in and still get to the Girls on the Run 5K.  There were about 12 girls who ran it from third grade to sixth grade and 5 of them were from my class and 3 from the other third grade.  I had lots of kids to cheer for including some older kids I used to teach.  The course was a muddy mess. It poured this morning, in fact there was lightning (after my run - the 6:00 thing worked beautifully).  The kids didn't care in fact the puddles and mud probably delighted them.
I only saw one kid at the start.  So I moved over to try to catch them in another spot. I stayed put as I would be able to see them twice. I saw many of them pass by me. I yelled and generally they spotted me and were DELIGHTED I was there. ( I felt like a visiting rock star.)  I had my cow bell to make lots of noise. I saw a lot of the kids twice and when I cheered they would grin ear to ear and start sprinting. I loved it!  Sometimes if I didn't see the kid a parent running with them would see me and give a yell.  After the race I went over to congratulate them. They were so proud of their medals and the fact that they ran 3.1 miles! This was a huge huge huge accomplishment for many of "my girls." There were family members there with most of them which was not a given at all!  I loved watching this and had every bit as much fun as when I race.  I got choked up more than once!  I can't wait to see them on Monday and hope they still have that glow!  A few were talking about future races!  More converts!  What a great program Girls on the Run is!
When I got home I managed to get in a bike ride - a great one between rain storms!
Posted by ajh at 9:49 PM

So you're not just indoctrinating colleagues about the joys of running, you're also getting them young. It's great to hear that they enjoyed their experience.

How awesome that you could be there for your kids...and even the ones who aren't "yours" know you. Bet that was super cool for them. You are definitely making a difference. :)

I LOVE your colleague's goal: a better time with the same level of non-preparation. A girl after my own heart! :)

Way to go!!! Looks like a blast...loving all of the pictures too:)

Enjoy the rest of your weekend!

You are such an inspiration to those around you. Fun races!

Your colleague that wants to improve with no preparation kinda reminds me of my fiance. He once ran a 25K with very few long runs under his belt. He survived it, but was sore for a few days afterward. I hope you can inspire her to set up some type of training plan.

Congrats on the 5K - glad you had fun even if your time wasn't what you are hoping for. I love big races too!

Sounds like fun at GOTR too - what a great cause/event!

We were running a the same time on Thursday - my race had over 9000, can you imagine? so I understand the slowness of the race. You can't be fast in those races. GOTR is such a great idea. I wish I were into running when I taught. Sometimes I bump into a former student at a race & they are shocked that I'm a "runner."

I'm thrilled when my 5K is in the 29's :) though I've never raced in a 5K. What fun that you were able to race with your colleagues...and then encourage the girls. I agree, girls on the run is a great organization!

sounds like a fun 5K and a great experience overall :-)

You are certainly a rock star to those kids - that has to make them feel extra special!! Nice that you could race with your colleagues too!

That 5k sounds cool - I like running on bridges. My first 10k ever was run across a 4 mile bridge (Chesapeake Bay Bridge in MD).
Girls on the Run sounds like a fantastic program. I ran my first 5k when I was 14. I never imagined I'd be able to finish it but my Mom was training with me so we just kept on. It would have been so inspiring to realize I could run that far at an even earlier age.

You are a rockstar! Glad to chat with you in the parking lot. It was fun to run the race with Kira, she's already talking about running another 5k. My feet and shoes were soaked!

You HAVE been involved with some fun races. The Girls on the Run sounded fun, you must have made their day!
So sad you don't like Chubby Cherub, I was thinking of putting her picture as the header of my blog. Jk...I'm sending her to Jill. I know you're jealous.
I'm sure you're getting excited for the end of school, how many more weeks do you have?

I love reading about GOTR stories! Have you seen this video with the founder, Molly Barker?
I've watched it several times and end up bawling each and every time.
Part 1
http://www.youtube.com/watch?v=qCCHo0qLYLw

Both great races Andrea, so much fun, it's all over your post.

You know I've had these problems with my Garmin too and ended up buying a new one.

I went to my first race as a spectator too yesterday and that was fun.

Sounds like a fun couple of races. Girls on the Run is such a great organization. I was signed up to do it last year and went to all the mentoring practices and then crashed on my bike and couldn't run it =(. I would really like to do it again sometime.

Sounds like a great weekend and how exciting to see so many people you have personally encouraged get out there and run and enjoy it!

The Cheseapeake Bay Bridge I raced on was the MD one, not the VA one so there weren't any tunnels. Although running in a tunnel sounds pretty interesting. They close one span of the bridge for the run/walk.

Nice job spreading the love of running with your co-workers! Sounds like everyone had a great time!

Glad you had a great time and ran a good 5 km :)
Beautiful photos.

So glad to hear you had such a good time. I am not a racer and I am more of a trail than road person. Still, I think I can appreciate the energy lots of people bring to those events. Then, come to think of it, crowded 5k? Now that is a challenge.

Sounds like really good fun at both the races. I'm like Anne, happy with 29:xx! I love seeing kids getting all excited when they run.

What a great race, I would have been bawling the whole time!!

LOL. well tell your co-worker that if i can improve with slack training, so can she! i like her method haha.

hooray for the GOTR kids! love how motivated they were when they saw you. glad you were able to make it to support them.