Saturday some of us from "my running group" will be doing a race.  Not everyone can do this race but there will be at least a few of us plus T.  One woman needs to bring both her children so she will be pushing a stroller.  The only other race she has done is a half marathon (she started big) just before she got pregnant with her first child.  This is her return to racing!  One woman is nervous but motivated by the t shirt! I get that!
Here is a story about the girl, Sarah, that the race is run in memory of:

Sarah loved adventure. In her short years she had traveled to Spain, Switzerland, France and Italy. She had driven with her father to Iowa and back. She jumped off the cliffs of the Dorset Quarry… jumped off a bridge into the White River…jumped into waitressing at the local tavern. She had explored Washington DC, New Orleans and the NASA Center in Florida where Sarah was inspired to become an Astronaut. She pounced on life and

shared her joy with all who knew her. Sarah was 16 on Mother’s Day 2009 when she died in a car accident at Transfiguration Farm in Brandon, Vermont. The purpose of the Sarah Leary Scholarship Fund is to give high school kids with financial challenges an opportunity to see the world so they, too, will live an inspired life.

The rains continue in Vermont.  The northernmost county of Vermont is about to be cut off from the rest of the state.  It is a series of islands. Some schools have been closed for days because of the flooding.  Lake Champlain is now 3 feet above flood level.  It hasn't crested yet and then the receding of the water will be slow.  The following article talks about Vermont City Marathon.  There is a strong possibility that parts of it will need to be rerouted.

Burlington, Vermont - May 4, 2011
Lake Champlain has taken over large portions of the Burlington bike path. And now there are heightened concerns that one of the city's largest events-- the Vermont City Marathon-- could be affected.
A few sections of Burlington's waterfront bike path have been hit particularly hard by the high waters.
"And as the water continues to recede and the wave action hits it, we expect there will be further damages," Burlington Parks and Recreation Director Mari Steinbach said.
The bike path makes up a significant portion of the Vermont City Marathon course. In a typical year, Vermont City Marathon runners would pass along the stretch of the bikeway near Perkins Pier, but this year that simply might not be an option. Marathon officials are already making preparations to reroute the race in a few locations if the bike path is still flooded or damaged.
Event organizers say they have multiple contingency plans for the situations that may arise in the coming weeks, but they will not move the date of the event. With an estimated 25,000-30,000 people filing into the city for the race, they are planning for the worst, but hoping for the best.
"We certainly hope that the water is going to recede and we'll put everyone right through the marathon course and we won't have too many problems," Delaney said.
Another section that is being flooded is the Bike Causeway between Colchester and Grand Isle County.  I cannot imagine this will be a high priority for quick repair. 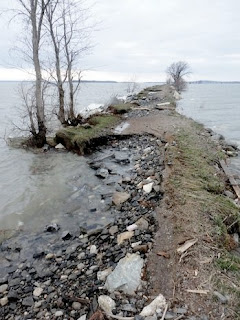 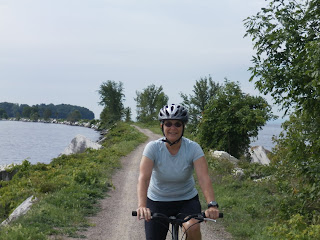 In Happier Times
Posted by ajh at 7:49 PM

What a wonderful memorial to Sarah!

The very beginning of my marathon was rerouted (or, I guess, the start location was moved) due to flooding. And the big news in S. Illinois is the levee that was intentionally breached in Cairo in order to (hopefully) save the town from being flooded at the expense of the farmland that was flooded instead. Difficult decisions all around.

So sick of the rain. Excited to run on Saturday, hopefully the weather is better than last year. Stowe 8 miler is the week after Mad Marathon and week before Koman.

Oh wow... I can't believe how bad the flooding is in VT!

What a great tribute to Sarah!

I am sad to read of this young person that didn't get to live beyond 16.

How tragic for life to be cut short at such a young age. It sounds as though she made the most of her time.

Sorry to hear the bad weather continues. The change in that bike path is amazing, I hope the floods retreat soon.

Wow. So sad when someone has to go too soon...I am sure it makes running a race a lot more meaningful when you are doing it for a cause like that.
And the flooding - hope it stops raining soon. You have really had tough weather this year...

It's a great memorial to Sarah!

Sorry that the Flooding Continues :(

What a beautiful tribute to Sarah.

That bike path doesn't look good Andrea, hope for you they will restore it soon even though that's not expected.

That is a great way to remember Sarah!

Wow, I love that you posted the information on the girl the race is in memory of! Good luck and have a great race.

Double Wow, the before and after pics of the bike trail. Hope it recedes soon, but there will be alot of work that needs to be done even then!

SO SAD about the causeway!

Sarah, too young to leave. Sad.
I am sorry for the flood, the picture is terrible, the landscape now is totally different.

It's unbelievable the number of natural disasters that have happened this year. That bike path must be normally a really pretty place to run. I'm sure you'll miss it till it's in action again.