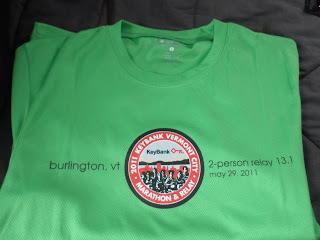 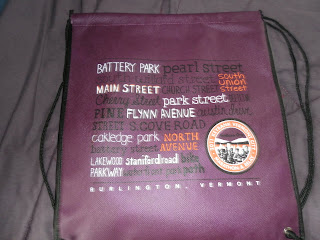 Woo Hoo! Tomorrow is the 5th time I have participated in Vermont City Marathon.  I have run it as a marathon twice.  I started running marathons in the fall instead because it is so much easier for me to train in the summer but I may have to talk T into running this next year as her first marathon. I would support her in her training and run it too!  This is the third time I have been in the two person relay. One year since I started running I JUST watched it and it was torture. It is absolutely a race I want to be in.  I used to go watch it before I was a runner and even then I so admired the racers, although I never believed for a minute I would ever be one of them.  I had so much fun my first time in this marathon (my first one ever) in 2004. Sure there were hard times but they are long forgotten.  I love how many times you get to see the people who come to see you.  The first year I ran it I had a lot of family there and a small crowd of  co workers who were there for the whole thing.  I smile just remembering that day.  Since then both of my children have raced it.  Jameson first did the two person relay with me and last year he ran the whole marathon.  Emily has done the whole marathon twice I think?  She has raced so many now I am losing track.  The year Jameson and I ran the relay together I kept seeing Emily as I ran.  Passing off the bracelet to him was wonderful.  Last year Jameson ran a few miles with me as he started out.  We passed Emily who was watching it as she was doing the second half of the relay.  Love love love running with both my children. This marathon totally has my heart.

Tomorrow is supposed to be unusually hot. Today was the first day I wore shorts this year and it is also supposed to be humid.  Speed records are not going to be set but I hope to do well. I have been hydrating a ton and will continue to do so tomorrow. Last year I was in a bad place near the end of my half and I think it was due to not being hydrated enough.  I don't want to repeat that.

I will look at my time in this other years but I am hoping to finish in about 2:05.  My times have been off lately and with the heat that may not happen but it is what I am shooting for.  Once I finish I will need to get to the finish line and try to catch other racers as they finish.

I did hit up the Expo last night.  First I spent $2 on two pins. Thrifty, right? 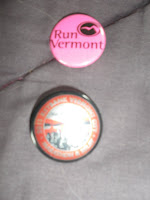 Then I went back though and couldn't decide between two hoodies I really like. One is a soft cotton very comfy one and the other is a tech hoodie. 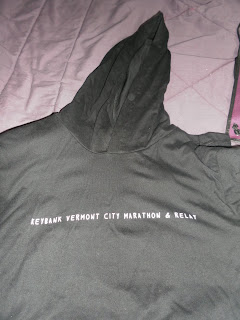 The front of the cotton hoodie, nothing special 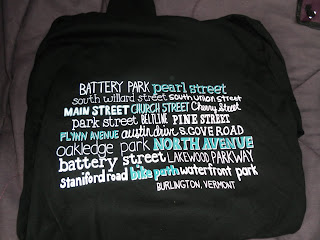 But I love the back! 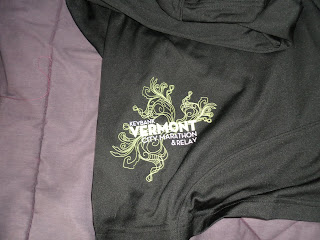 Design on the front of the tech hoodie 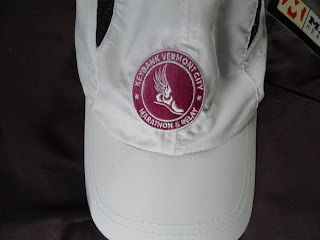 And oh yeah I got a hat too.
And as you must have guessed, I got both hoodies!
Posted by ajh at 7:53 PM

I'm so excited for tomorrow too :)
I was able to officially transfer to the half, which is great! How cool that we'll be running a half at the same time. I hope the weather stays reasonable in the morning.

Ha ha! Knew you got both hoodies!!! Sucker-ha! GOOD luck tomorrow! Have a blast!!!

I hope the weather forecasters have it wrong and it's actually cool and clear for your race. Good luck for tomorrow.

Well, I was certainly hoping you got both hoodies - too cute!! I sure do love a hometown race. That's how I feel about the California International Marathon, true love. :) Good luck tomorrow, fingers crossed for cool weather!

Have a great time tomorrow. Lots of excitement about the event has even reached me here in AZ, so I'm sure it'll be a special event for many! Good luck!

Great loot! Good luck on the race tomorrow - I hope the weather is not too warm!

Hahah, I like your style of shopping!! Your closet must be pretty jammed pack now ;).

Good luck on the race - hope it all pans out beautifully for you!!!!

Have fun today. Reading about it before you even started is already fun and I think you will have a great day.

Hope it isn't too hot for you.

Cool swag! Good Luck on the race, have fun and hope it's nice and cool!

Have fun and lets hope the forecast is wrong.
We are on the cool side here with occasional rains. Very strange spring for CA.

have fun at the race. you scored some cute loot at the expo!!

Good luck and enjoy your favourite race! Have a great day.

Just found your blog and I love it! Those hoodies are ADORABLE. Good luck with your race!!!

Love the hoodies and the hat. I can see why you couldn't decide between them.

I read this ages ago and obviously never commented. I love that you scored at the expo! Those things are just so much fun when you have all of it in front of you to pick from. I'd be like you - one of each, please! Who knows, I'm at an expo in Seattle on Friday. I might have to hand someone my credit cards so that I don't get out of control!