This fall is the most spectacular in quite some time.  I took a short run and ride where I can hardly call it aerobic because I stopped so much for pictures.  I took over 130 pictures!  It is absolutely my favorite time of year.  The main problem is it's way too short.  I also got up to the Islands where the foliage isn't at the beauty it is around here yet, it was still an amazing day.  I've gotten a couple of great rides in after school too although that is getting harder and harder.  I may do a race this weekend although I seem to be putting off registering. The weather sounds like it's going to change so maybe it wouldn't take away from my biking.  I'm still happily going to my strength class once a week and managing to do some on my own at least one more day. It isn't much but it's way more than what I was doing. So not much to say here but I'll throw in  a few of my many pictures. Enjoy our beauty! 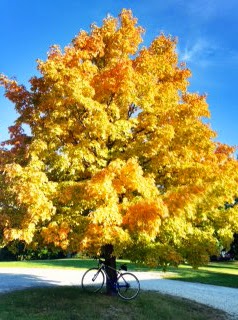 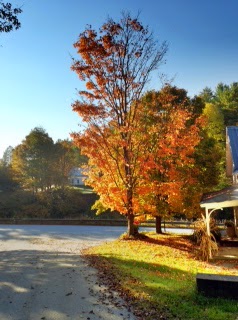 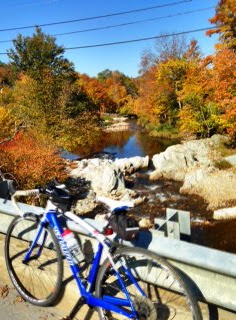 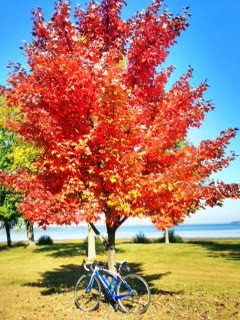 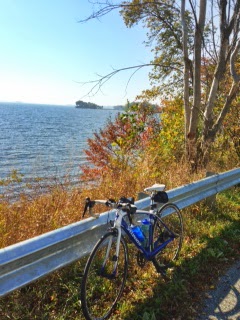 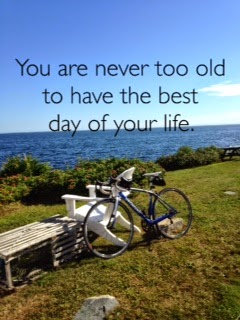 I read this quote in a book by Anna Quindlen, one of my favorite authors, and found it perfect.  I added it to a picture from my bike ride in Ogunquit/York. 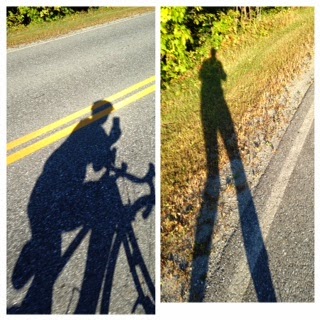 Wednesday I expected to be picking Em up at the airport in Albany. But she got a voucher to come into  Burlington instead, although much later. A win for all of us.  It was closer to pick us up. She has a free flight in the future. I got a ride and a run in that I thought wouldn't happen on a very pleasant day. 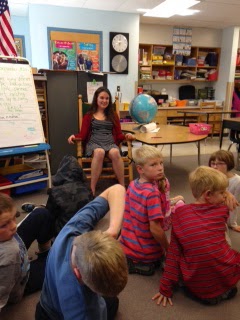 Emily came in to talk to my class about her 100.  They had such good questions and I learned some new things about the race too.  One guessed it took her two weeks to do it.  They wondered what she ate and where she slept. I was amazed no one asked about the bathrooms or lack there of.  It is hard for them to comprehend someone running 100 miles.  It is hard for me to comprehend someone running 100 miles.  I loved having her there and having my students meet her.

I have to say although I don't want to jinx it that I am having such a good year at school. Please, please no one move in to change that.  I have a great group of kids. I have two good math groups.  What a difference it makes to have even keeled students. 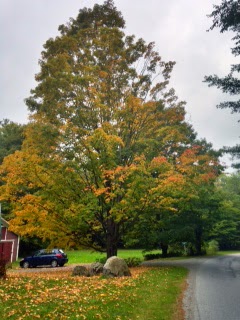 There's not a lot of color change yet. I took this one today when I was running. Again, I wasn't sure if I could run or bike and I managed to do both in perfect temps. I went to my strength class again this week.  It was complicated to  get there because  I was letting Em use my car but I worked it out.  My first ride forgot me but I still got there. I am enjoying it a ton.  When I did the exercises myself on Tuesday I definitely did something wrong because my shoulder hurt the next few days. 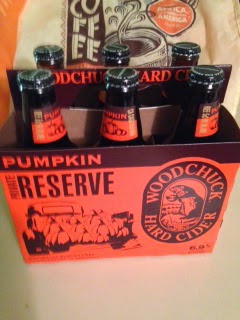 Today, Sunday, the whole family summited Mt. Abe.  I am exhausted. My children tell me we will be going up Mt. Mansfield tomorrow. I am not a hiker. I am tired.  I am dead.  Things ache.  We shall see. 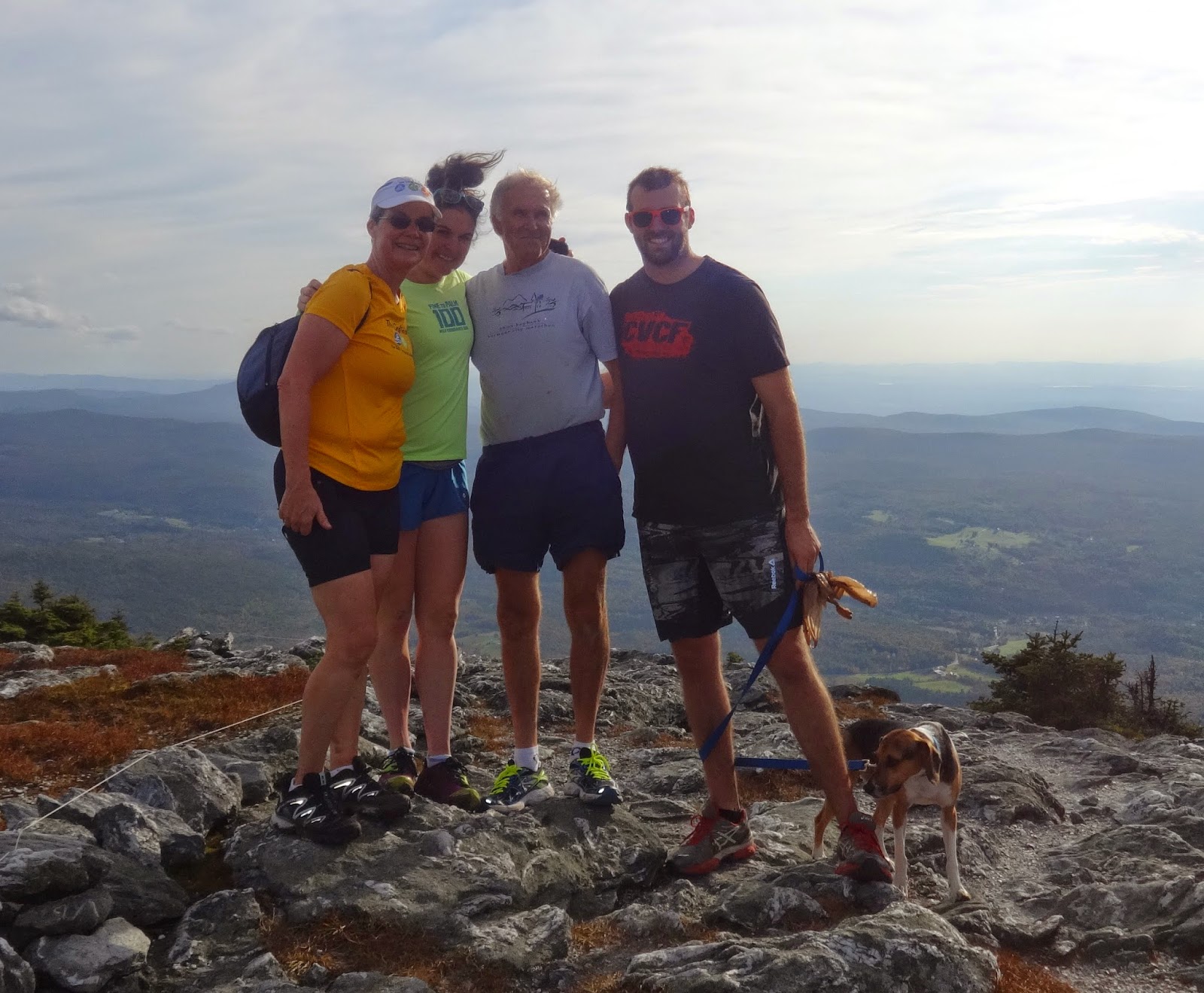 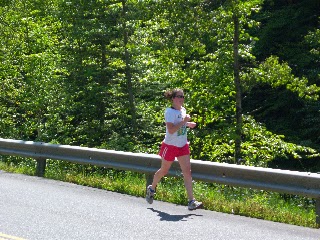 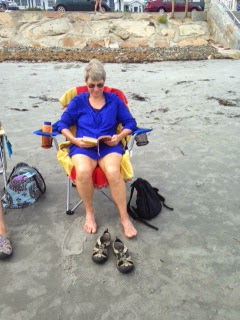 My last tri of the season was a ton of fun. 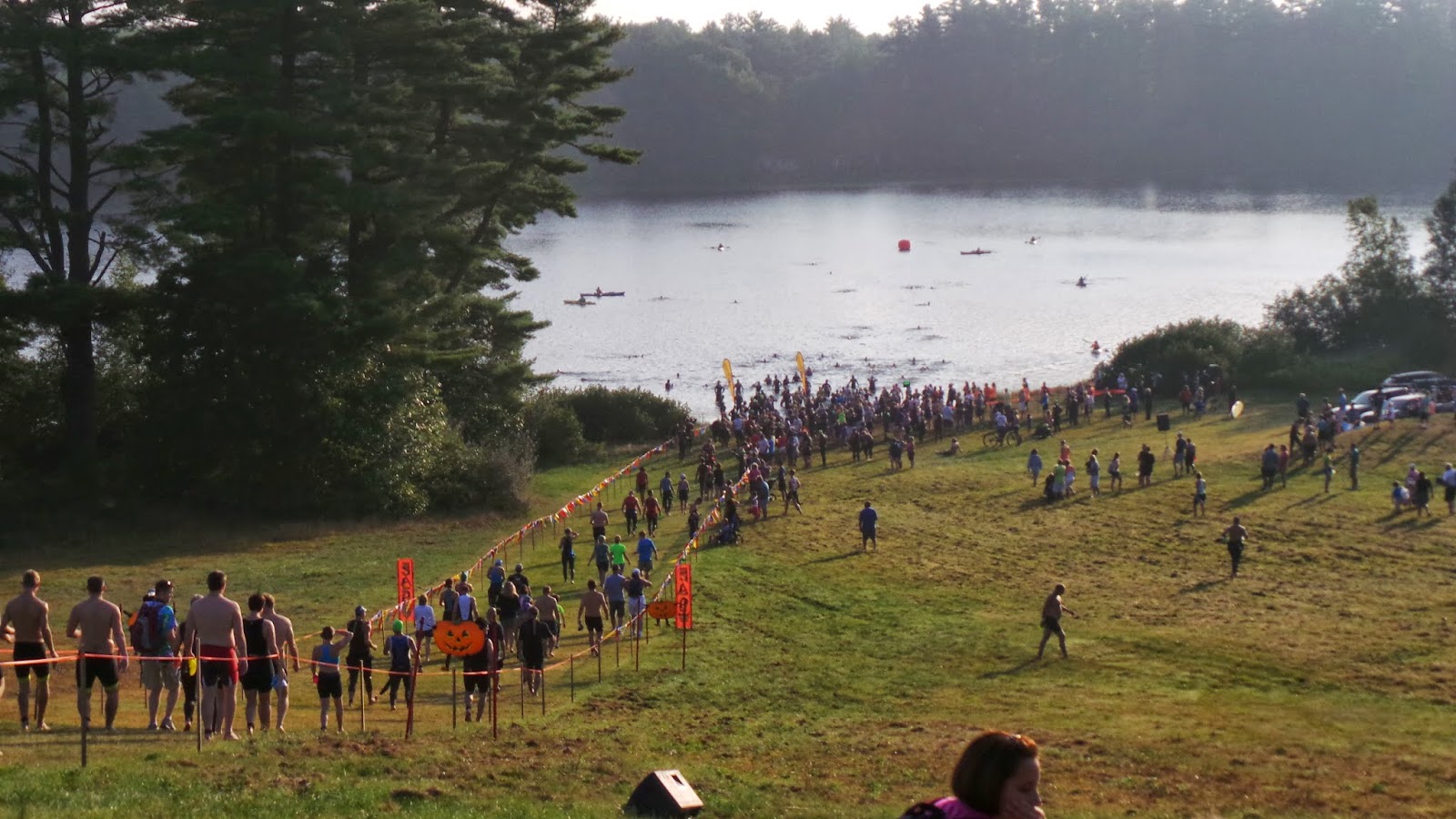 On the way to the start

I will admit that I was very worried before it began.  I knew it was weedy and the pond had some scum on the top.  I found myself doing lots of deep breathing, bending over so I wouldn't throw up and humming.  Yeah, I'm that person you want to be standing next to at the start.  I was quite worried I was going to lose my cool again but once it started I was truly fine.  I did encounter weeds of course but was able to handle it. I was in the 4th of 8 waves so I had people around me the whole time which I like.  My goal was to only get passed by people in the wave right behind me and that happened.  I did pass a few and I felt like my time was great. It was 12 something compared to 15 or 16.  I did a great job of swimming in a straight line. I questioned my route because so many people were way out but I was fine.  I did the breast stroke because that seems to keep me calm these days.
Last year I did the swim in 12:23. This year 12:38 but that's close enough.  I was worried I'd be way up. I am not sure why I am faster here.  I was 402/476 in the swim. How many people would be happy with that? But I beat 74 people. In my world that is good.

The race gave a wet suit to the person in the exact middle. I thought that was a great way to give it.  Many people were joking it needed to go to the slowest swimmer. 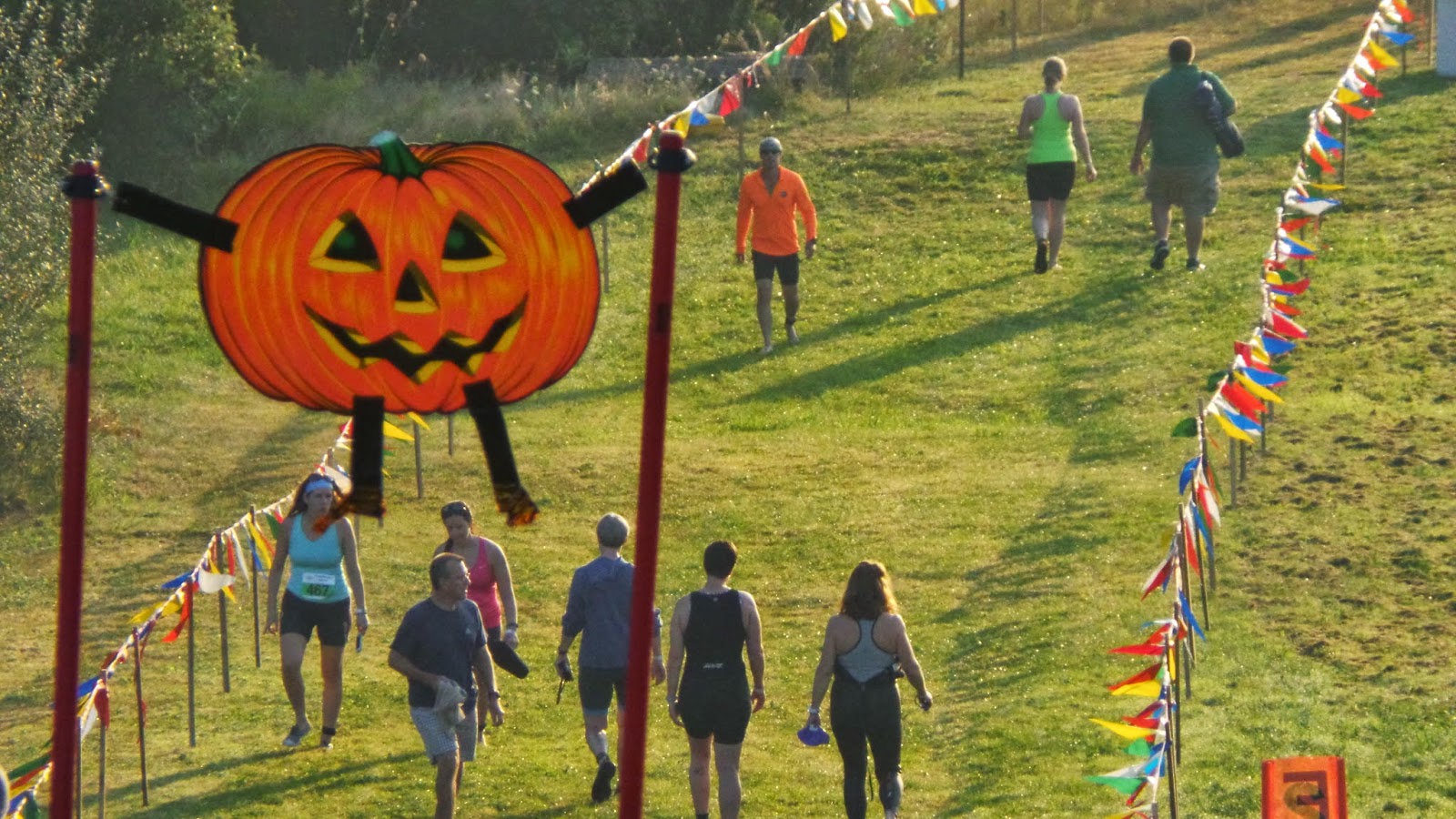 Before the tri - checking out the pond 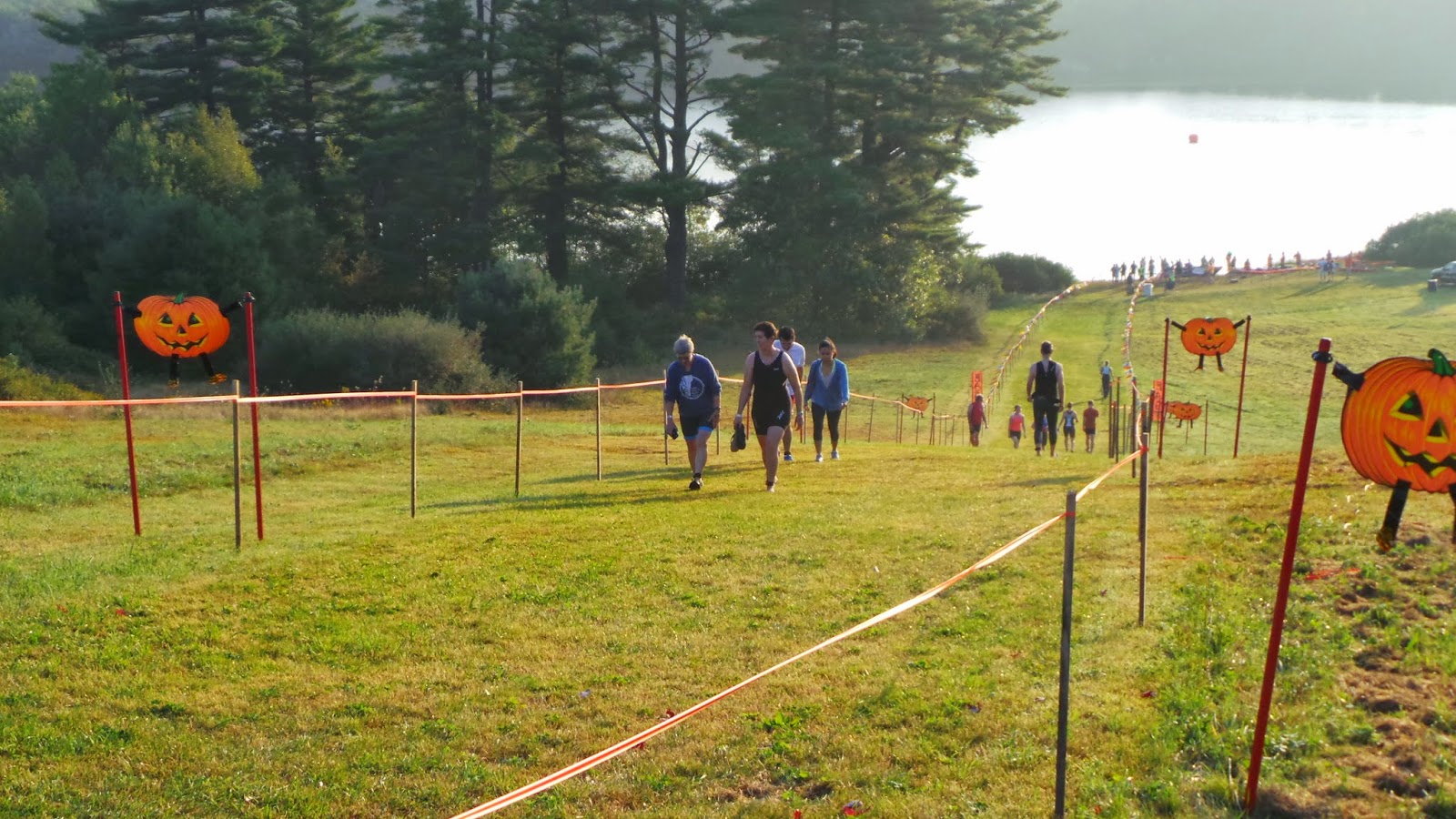 Once done I had to do the hill climb.  They give a prize for this too. No chance whatsoever!  I did it in 2:11. I think the winner did it in 47 seconds. I cannot imagine. I was very slow! 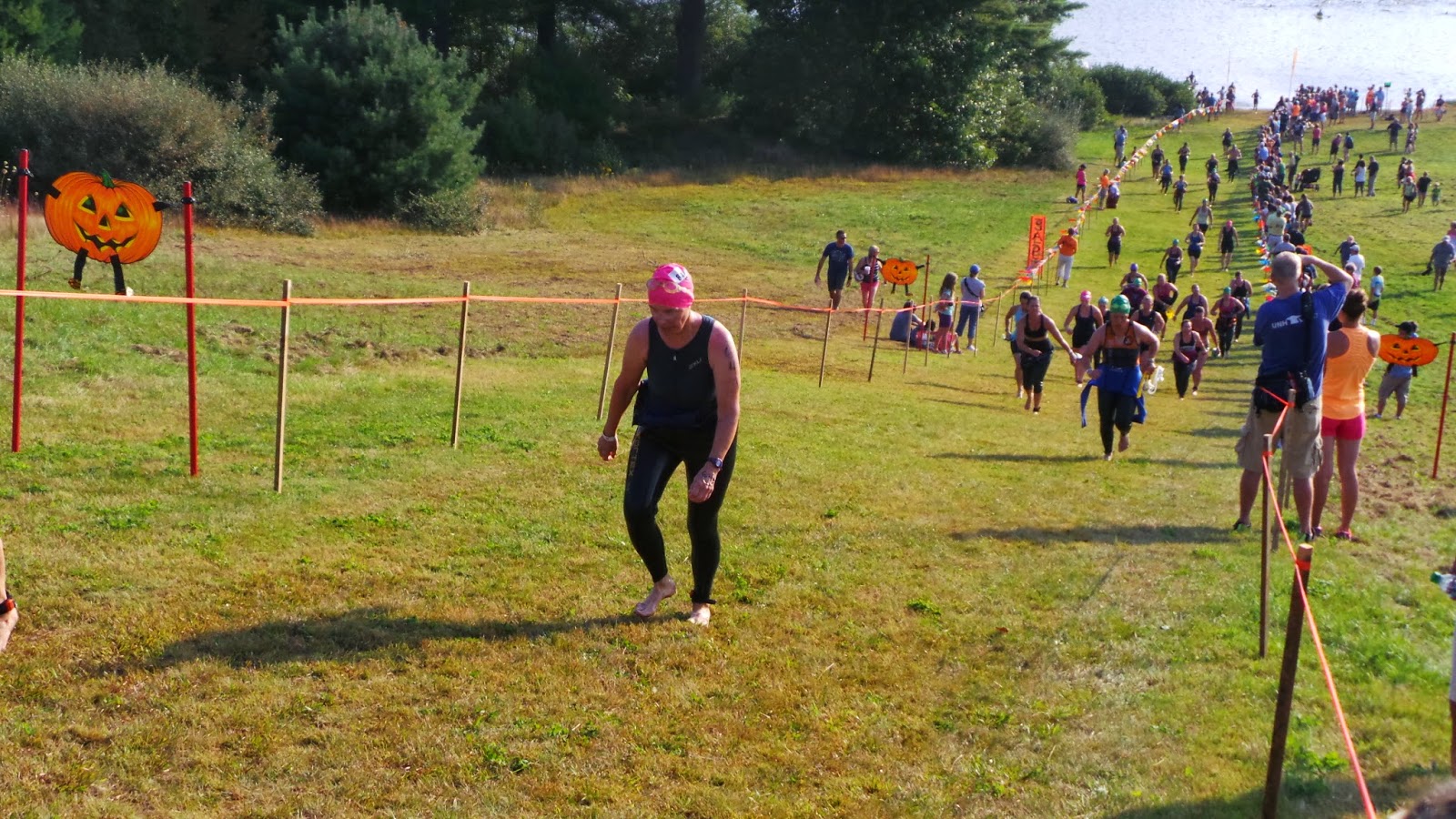 When I got to the top my bike was right there. IMO I had the best bike spot in the place.  I could find it. It was on the end of the rack when you ran in. I had a fence to put stuff near if I wanted.  Yeah, I had to run through transition with my bike but on the run I was right there.  Loved it. Between the hill climb and first transition that part was about 30 seconds faster this year. I did well in transitions.

Bike racks at this race have lots of room. There are numbers for exactly where you put your bike. 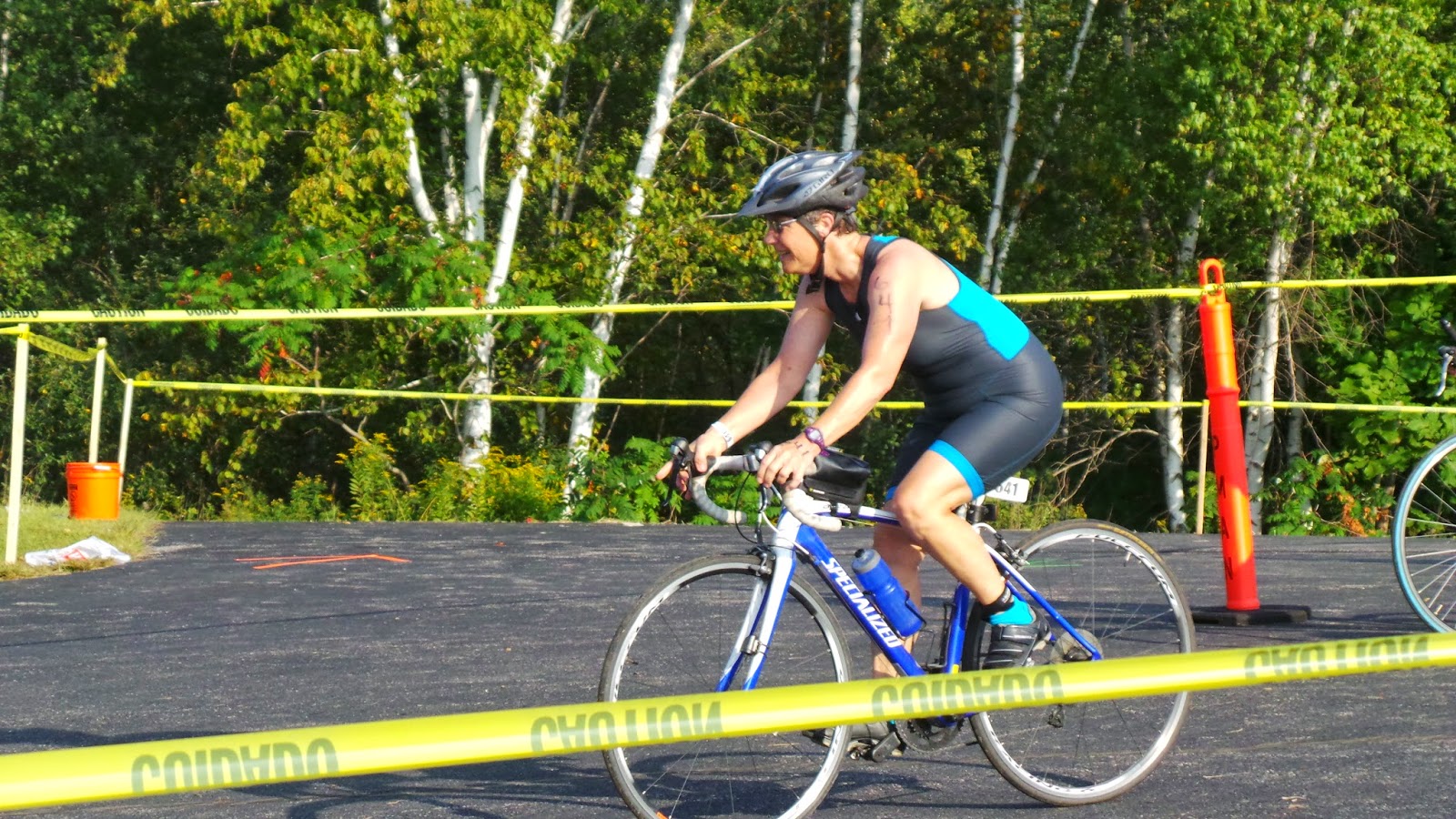 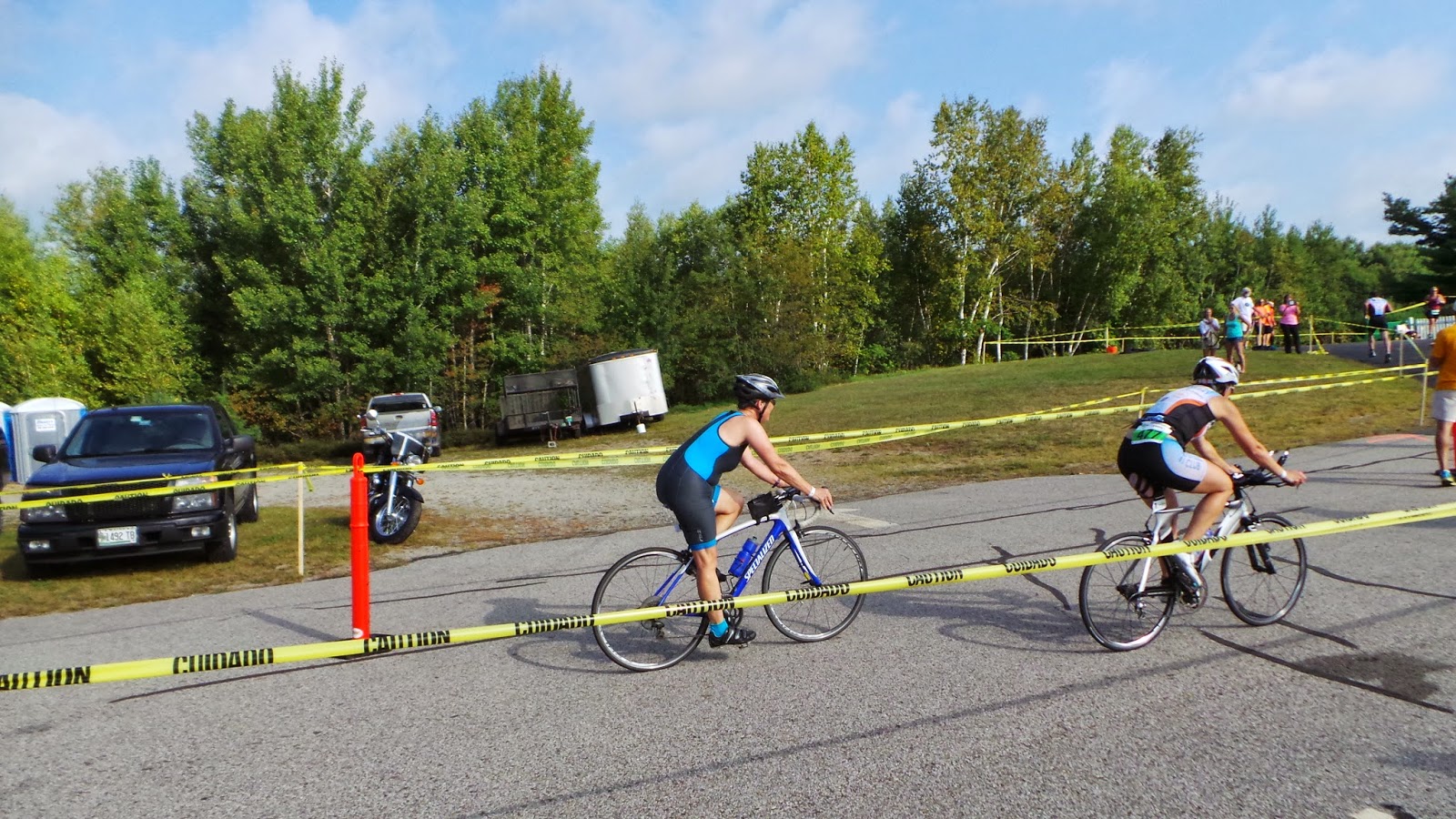 On my way back in.

Then it's bike time and I start out with a smile on my face!  Love it. It was a bit crowded at first and the whole time there are bikers around you.  Fast athletes were in the later waves so I had many passing me but I also passed a decent amount of bikers. (31)  It isn't an overly hilly course although you have to pay attention to pot holes.  I was slightly faster than last year - 52:43 to 52:16.  I had hoped to improve it more but oh well.  I was 277 out of 476.  So I beat almost 200 there.  My pace was 16+.

It was hot. Really hot.  Like 88 degrees. And very very very humid.  It was hard to run to say the least. 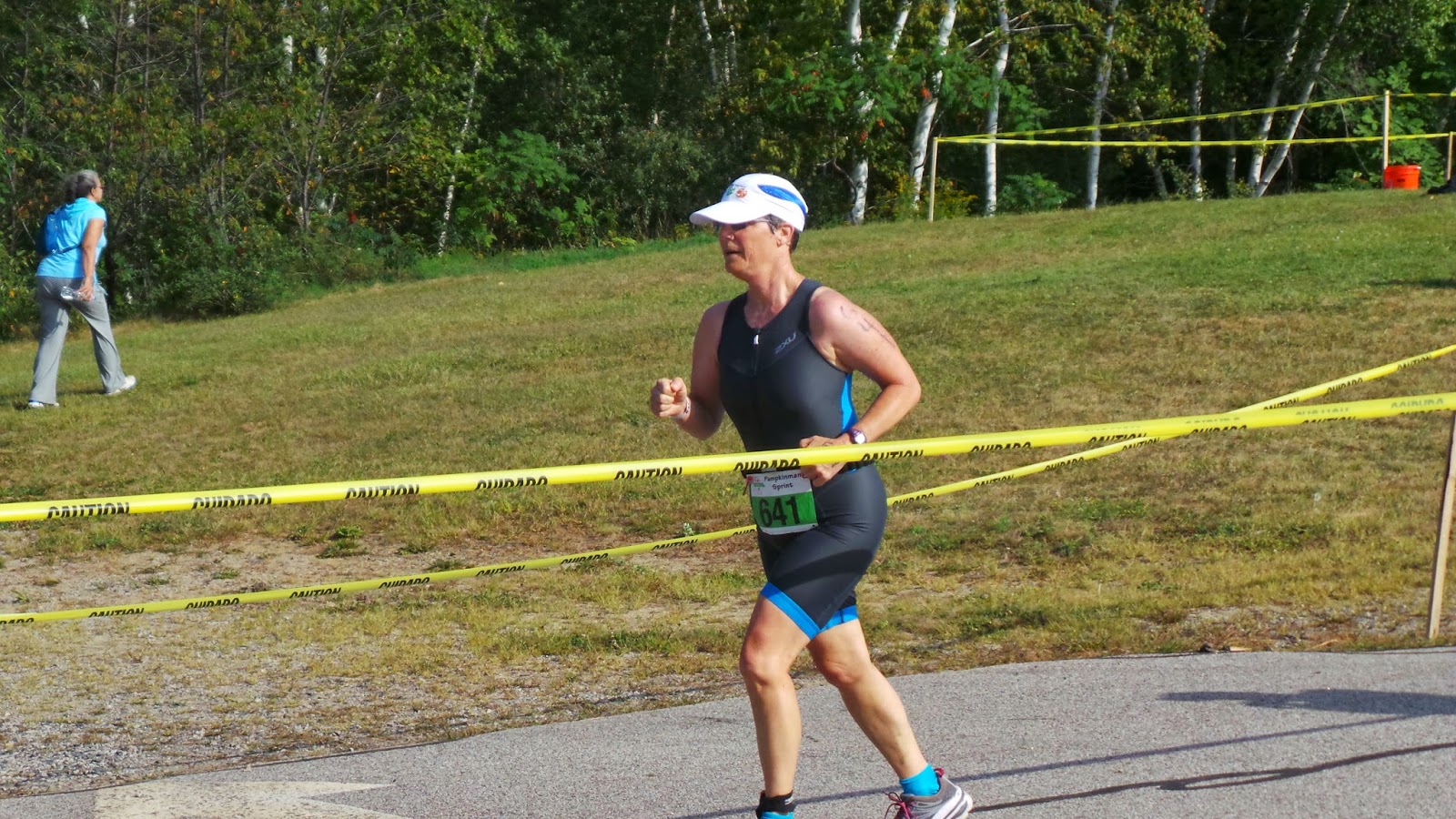 On the run - heading out.

My happiest statistic is that of all women there I was 111/233 overall which is top half. I say a big woot woot to that. 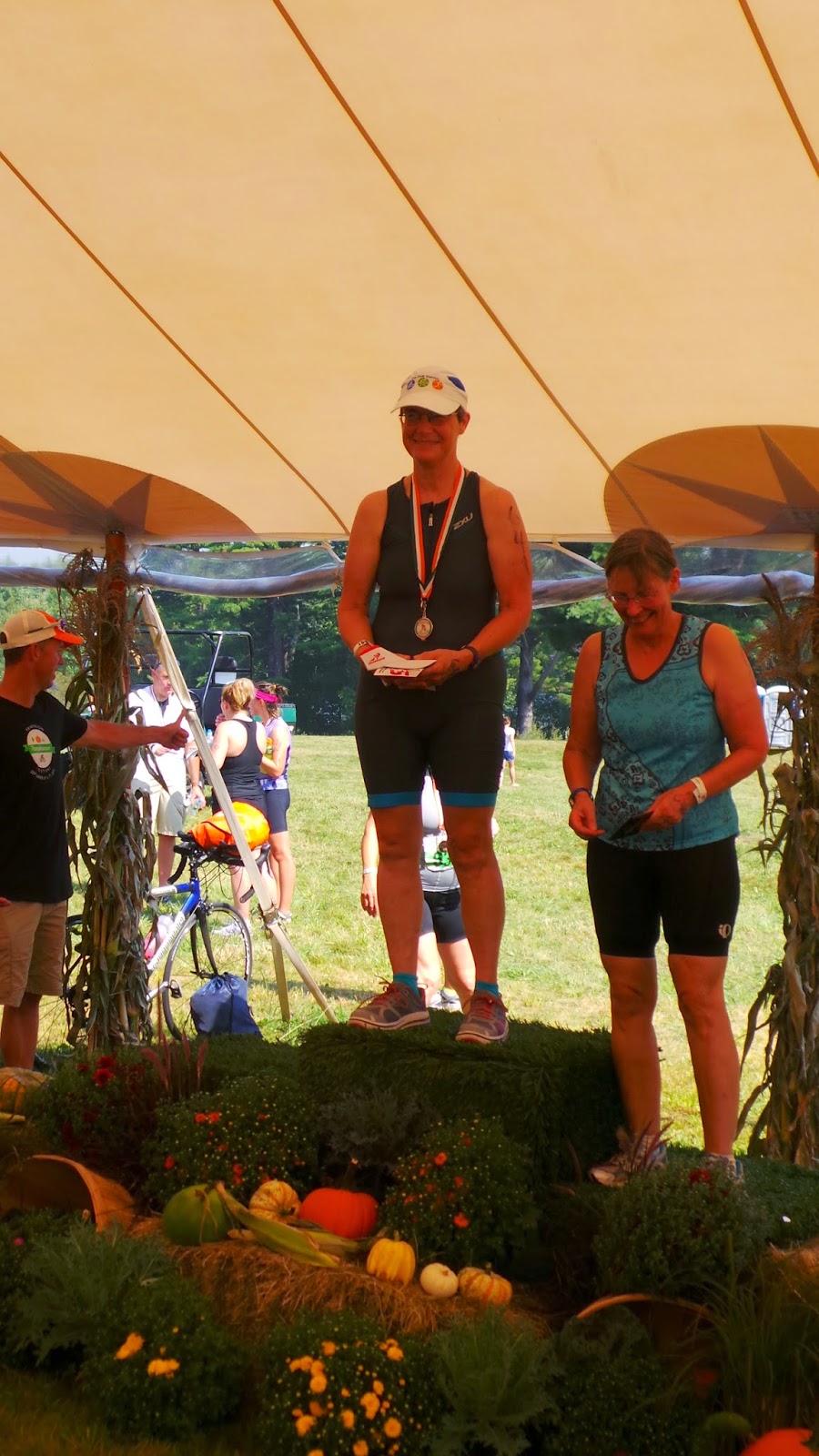 On the podium - such fun. 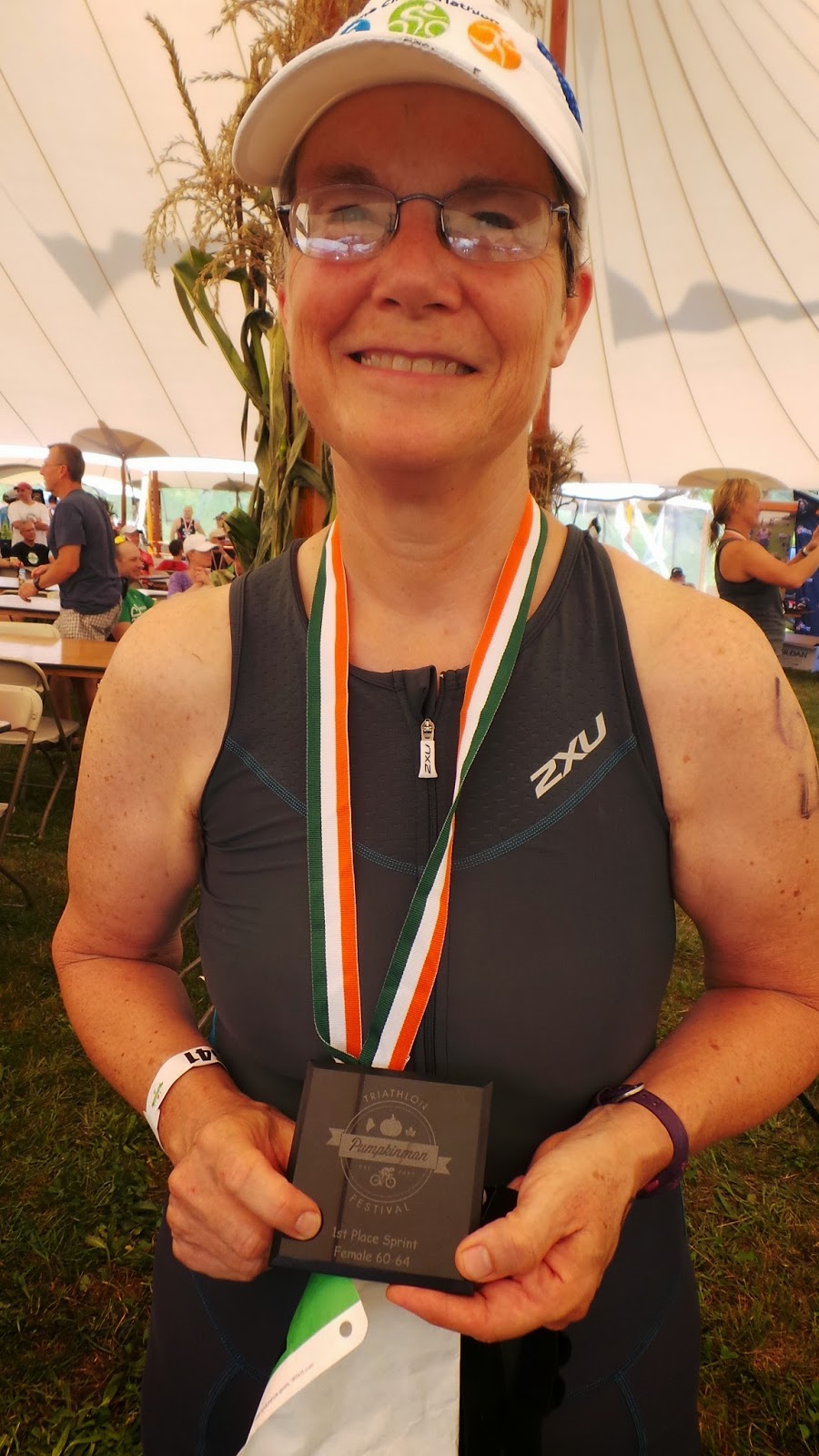 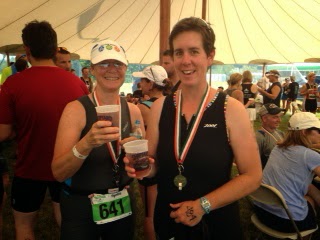 Drinking the pumpkinman ale - love it! 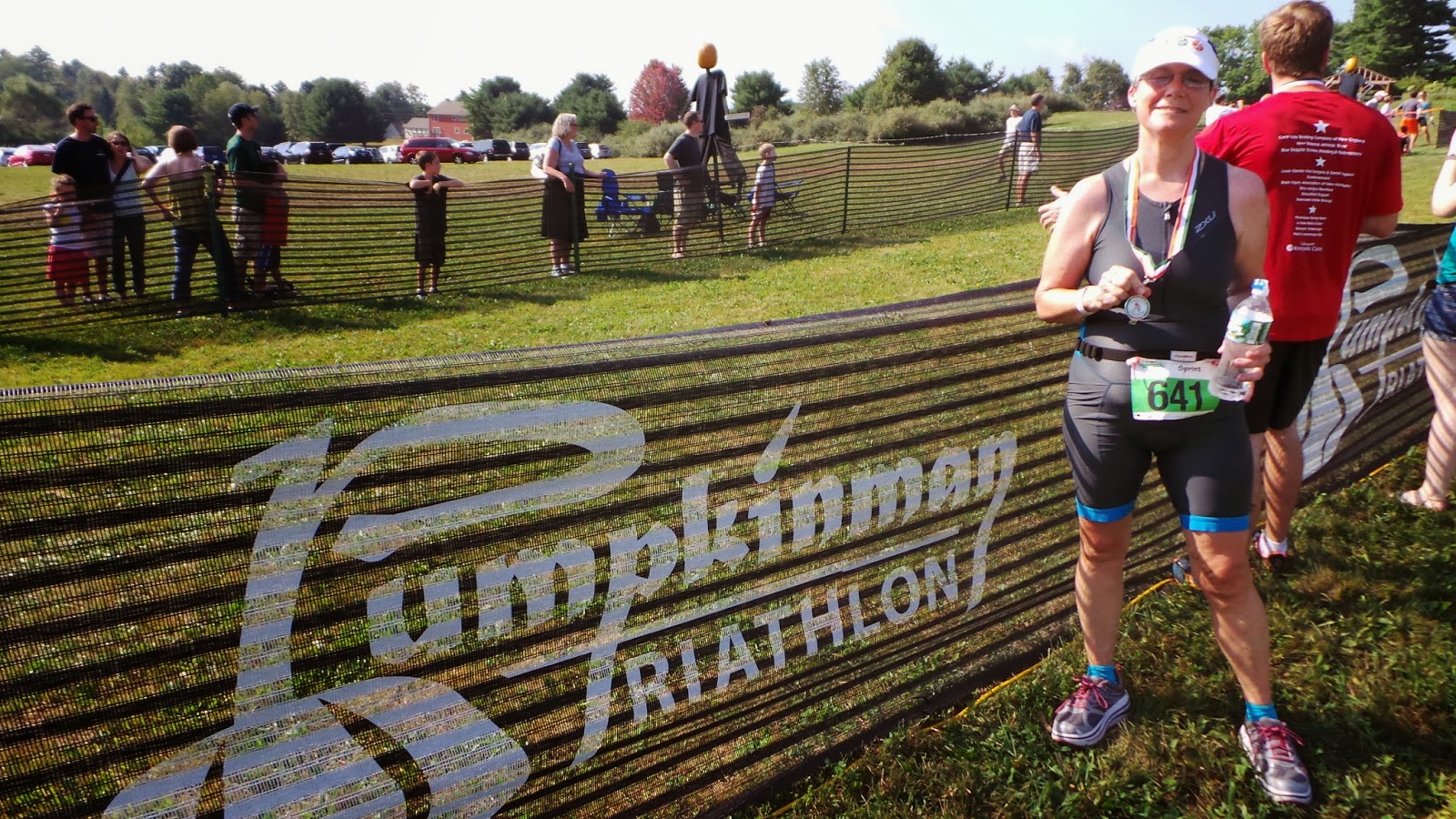 Hate to see these ending for the season. 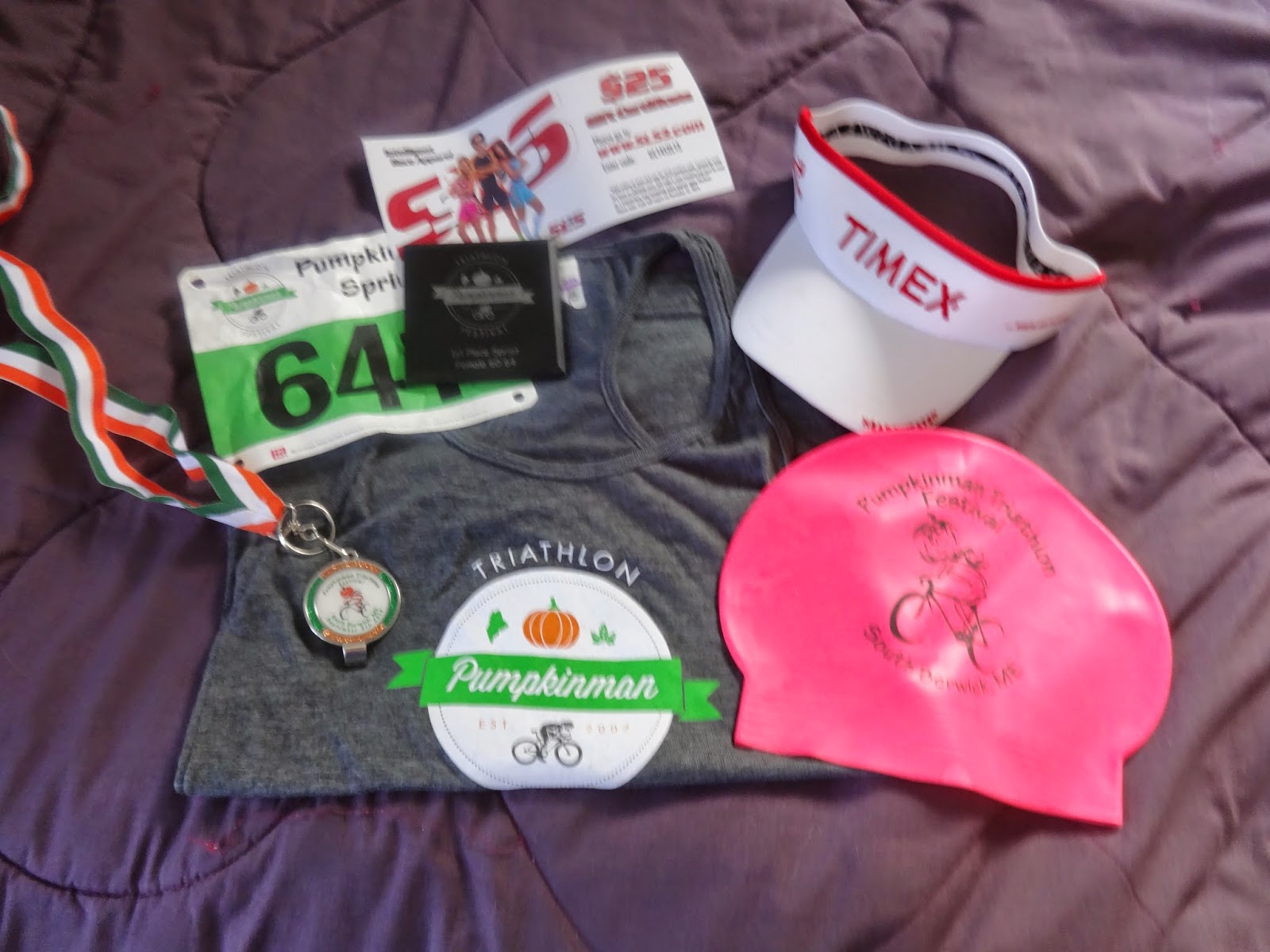