The Sunshine Run Race Report and some biking 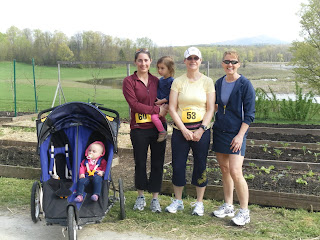 R, Myself and C before the race and R's two cute
kids including her 1 year old in skinny jeans!
The Sunshine Run was great in spite of the reason for it's being.  Both of Sarah's Leary's parents spoke at the race. Her dad said he wasn't able to drive by this farm for a long time (it is where the accident occurred and Sarah died) but the race has transformed it into a place with many good memories as so many people turn out to honor Sarah.  Truthfully I don't know how her family does it but it is a wonderful tribute.  Last year (the first year) there were 200 racers. This year there were 300.  The proceeds sent a student to Spain who is now going off to college to major in languages.   There is a blog post written last year by Sarah's mother about the help everyone has given her.  There was a long segment on the local news tonight about the race. I cannot imagine the emotions the family must go through today and every day. I admire them tremendously. 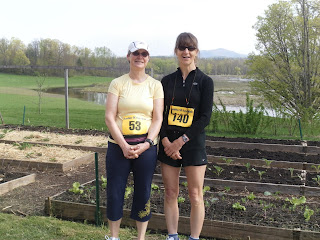 T and I are good to go 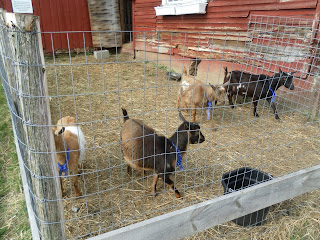 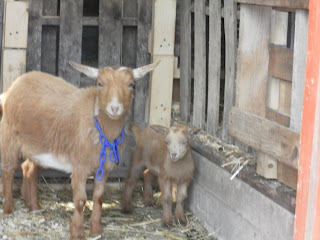 First R ran with her older daughter (almost 3) in the children's race. 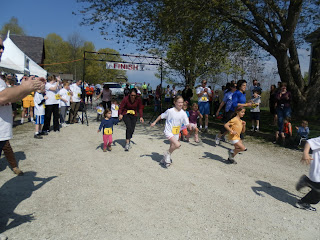 Then she pushed both of them in the 5K UP and DOWN all those hills!  Wow!

I laughed when I met C as we were racing as she mouthed to me - "You are the 8th woman. There are only 7 ahead of you."  Yeah, those competitive juices will be coming out in that lady!  Both C and I won random prizes which I hope hooked her even more. 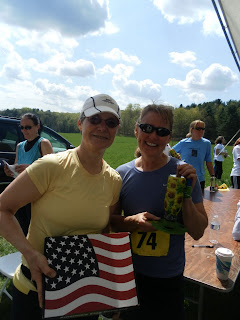 I got a flag that has flown over the Capitol
that Senator Leahy donated to the race.
(Shh) I am going to give it to my husband for
Father's Day. He will love it.

Last year the race started by running through a field.  You were instantly soaked plus worrying about sprained ankles so I was relieved when I heard we wouldn't be doing that this year.  When we approached the turn to the finish we kept going past and down and up another of the many hills. I could see where the people were turning around and it certainly looked longer than the field would have been.  As I headed up the hill I yelled to cql that we were going farther than last year. 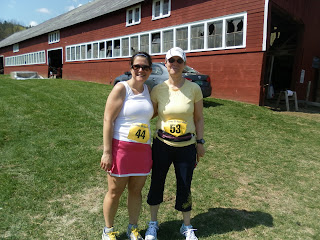 With cql after the race
Sure enough as I approached the top of the hill before the turn to the finish my Garmin was already showing 3.1.  By the time I finished it said, 3.35, an extra 1/4 mile. I was glad I had the Garmin so I could know what I did run and how long it was. My pace was 9:13 rather than 9:03 like last year. I thought maybe with not having to run through the field I would be faster.  I felt good even with all the hills. One of these days I will have a race in the 8s again.  But I am not going to beat myself up and hate all my races nor am I going to accept that I have just slowed down. I will keep working on getting in the 8s and having fun regardless because I do love racing!  I don't think it will happen next week as the course goes straight up a hill I always avoid but who knows?  My son would say of course I won't do it if I am thinking that way so I am allowing a little hope/expectation that I will.  (I haven't told T but we will be running up that sucker tomorrow!)

It was fun to cheer people in and to have a lot of friends there.

Here is cql motoring up the hill for a strong finish! 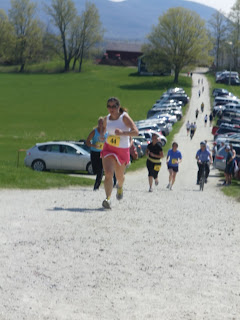 R and C came a bit later.  Can you imagine it being your first race  and you are pushing two kids in a stroller up that hill?  My friends rock! 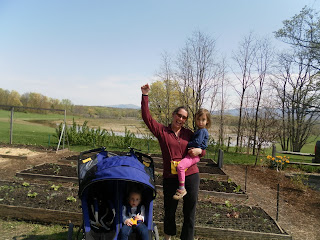 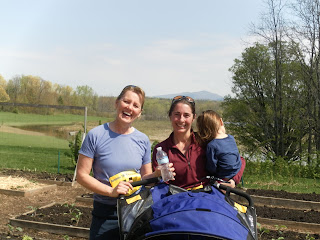 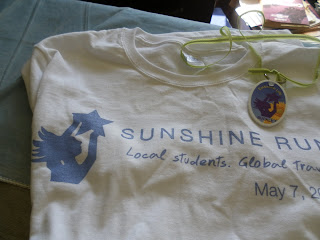 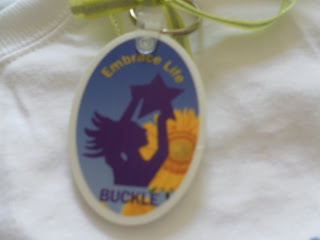 A key chain I got for registering early 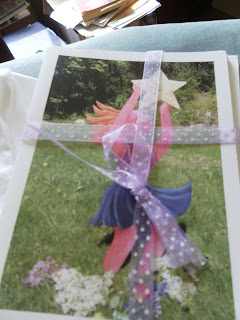 Cards I bought - showing the statue of
Sarah on the lawn where the accident was.
The family who owns this farm must be
really something to allow this
race each year and the statue on
their lawn.  (Up to the sky, down to the
ground and all around the world)
The Bike Ride
It was a gorgeous day so once back from the race I headed out on my bike.  I did my 15 mile loop that sends me up a mountain, no rolling hills here.  I didn't know if I was ready for this but went for it.  I tried to push it a bit thinking about that duathlon I say I am doing.(not registered yet)  It is a 15 mile bike ride. Well this ride took me forever,way longer than anyone in the results last year.  Yes, it was hard and I can't imagine the course is as bad but I had downhills today too.  I will have my mountain bike and not a particularly new mountain bike.  Am I crazy to do this?  I really don't mind being last but I don't want to be way last and have people waiting for me.  Then of course I will need to run too and the first mile is uphill.  Yikes.  I still have a month and I have plans for a 27ish mile ride next weekend.  I can get ready.  I can do it.  I can get ready. I can do it.  I couldn't resist taking a couple of pics. 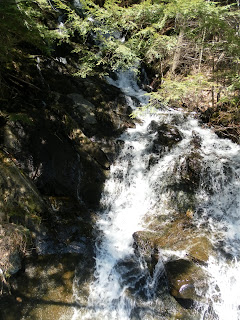 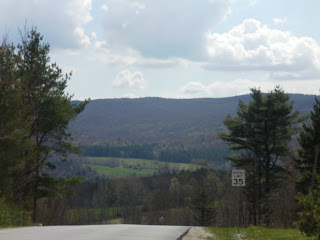 No I can't imagine racing my first 5k pushing two kids in a stroller. Your friend is mot just aerobically fit - she's strong!

Your race sounds like fun with all of your friends there, but that hill looks like a tough one! The flag is special - really nice gift! So sorry about Sarah.

What a GREAT day! Sounded so fantastic!
A baby in skinny jeans? I had enough trouble getting my kids regular pants off for diaper changes - I can't imagine skinny jeans!

Such a cute baby goat. We saw a field full of new little lambs the other day. Cutest. Thing. Ever!

Your friend's DO rock! And how wonderful that Sarah's family is able to bring something positive from their loss. Some race friends of mine just participated in a memorial 5k race put on by a teammate of theirs who lost an infant daughter to SIDS. I can't imagine that kind of pain or strength.

Go you on this duathlon! You can totally do it, especially with a month left to train. Like you, I'm working to get into the 8's in a race.

What an active day it has been!

The race sounds wonderful, such a great way to remember her. And the baby goat is too adorable.

What a fun day and your friends do rock! :)
Yay for getting back out there on the bike...more giving us beautiful photos.

My running speed seems to be gradually coming back and yours will too! You WILL see those 8s again!

You ride in such beautiful places!

Sounds like a fun race in spite of the hills, but I can't imagine pushing a stroller up hills...they beat me up as it is. Love the waterfall pic! Beautiful!

Just remember that hills will only make you stronger!!! Really! I think you should do that duathlon - you will do just fine - just keep doing a little riding (with hills) and running (with hills). :-) And yes, the Colorado River does always look that mucky! Have a wonderful week!

So fun to race with friends! Hilly races are tough, but the biking you are doing is going to help you become faster on the hills!

So glad you had fun at the race with your friends. I can't imagine pushing anything up and down multiple hills. I also can't believe I saw a picture of a baby in skinny jeans! That's just too much...

That’s a lovely 5k race you ran. Sounds like you really enjoyed it. I can just imagine pushing your kids over a course like that. Bike ride after the race…perfect!

What a nice race!! Re: biking - I think you can do anything you set your mind to.

What a wonderful tribute to Sarah. It sounds like a great event. Congratulations all around!

Oh - I forgot about the books - I have a couple of non-fictions (somewhat political, somewhat heavy) I am trying to get through and I have been cruising through some light, easy-read, sweet-storied fictions. Of late, I have been drawn to fictions about the Amish. Corny, I know.

Congrats on your race! That hill is crazy!

You have the right attitude about the 8's, I need to get my mind in the game on that end as well!

That sun looks fierce, glad you kept the bike helmet just for the bike ride this time! Great pics!

Glad you had fun on such a meaningful run! We have a few stories in our Reading series that are about fund raising and making a difference. I show my students photos of race fliers for different events that promote running for charities. I even show them some for events like this one. They really get in to it and make some great connections. I'm glad there is a special way to remember Sarah and keep her memory going strong!

That hill IS a monster and pictures never do justice!! Love the little skinny jeans! I babysat for my sister and her little gal had these on. Seriously hilarious!!! Congrats on the race-glad you had such a good time!

what a great way to honor Sarah.

I love racing with my Garmin now, because the course always seems to be longer than what they claim to be!