The challenges I am referring to are pretty simple.  At some point I decided to try some new things I might be a little hesitant to do while I was on the cruise ship.

First I tried line dancing. I have always been intrigued by line dancing but have never given it a try. When I saw in the ship's newsletter that there would be line dancing that evening I decided to give it a try. I got one other person to go with me. I found it harder than I thought it might be. It was crowded and hard to see the leader and I needed to be following closely.  I never really got it but it was fun and do think I could do it in a less crowded, more organized setting.  But, I gave it a whirl.

Second, I tried karaoke.  The first thing you need to know is I am a terrible singer. Really terrible. But isn't that what karaoke is?  Well, not always. The first two people who got up were trying out for one of those reality shows I think: America's Top Singers.  Well, not me and I almost lost my nerve but the young lady running it got me up there. I also didn't choose a boring song like the better singers. What did I choose?  Leader of the Pack!  My new friend who tried line dancing with me also went up with me to sing karaoke.  I don't know if we were so bad (well, I do)  that another new friend, Joe, joined us part way through.  It is hard to follow those quickly scrolling words even when you kind of know them!  But we did it. Most singers went up several times but I decided to take mercy on the audience and only went the once.  I stayed and watched it all.  My favorites were the ones who didn't sing well, including this sweet man who sang to his wife with his daughters crying in the audience. 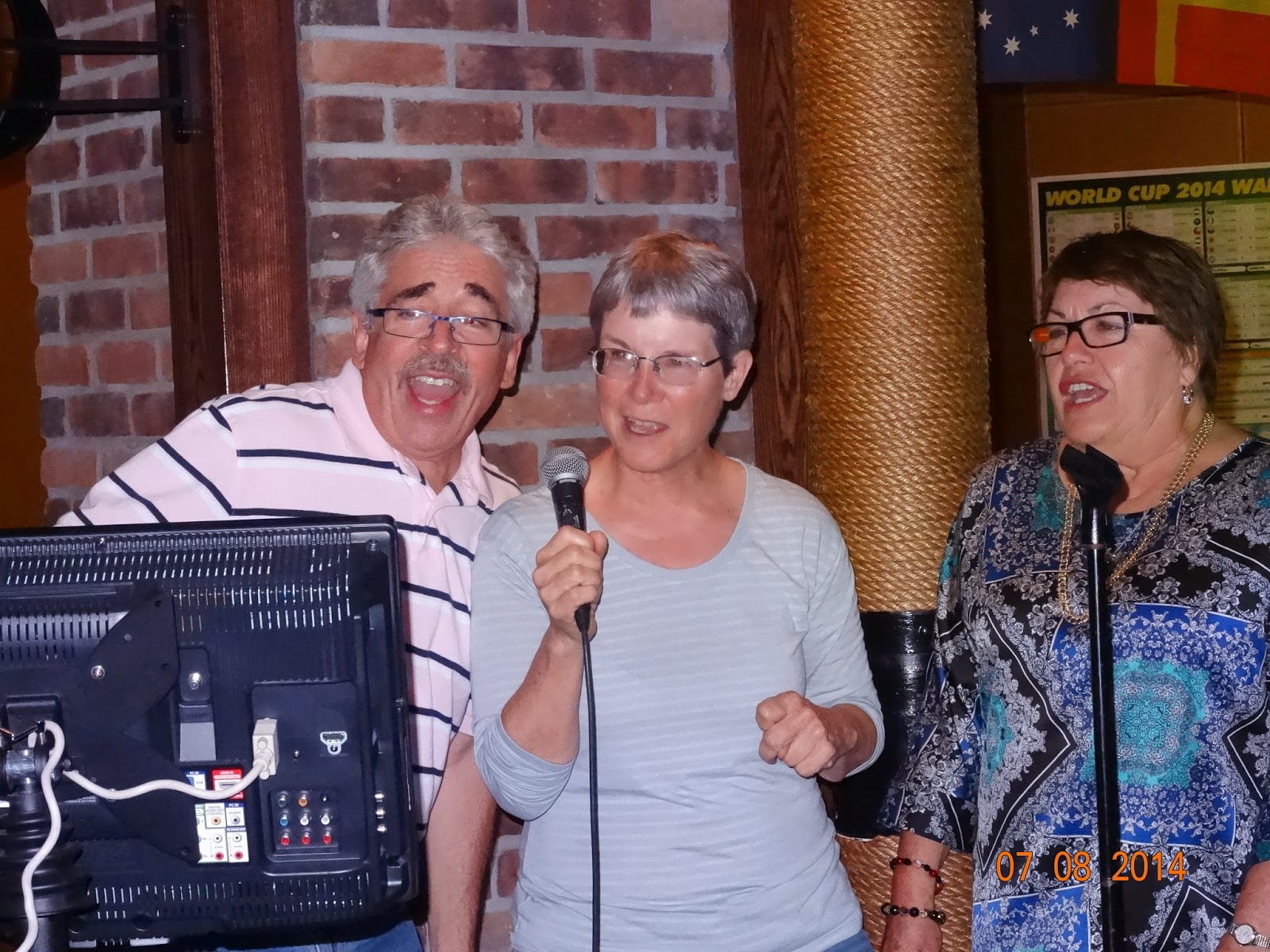 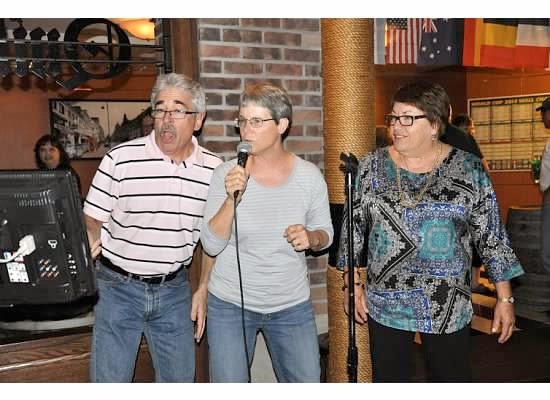 Third, I tried rock climbing on the rock climbing wall. When we got a tour of the ship the first day I said I wanted to do this. A young woman who was on the tour told me she would do it with me.  I didn't go up there again until the last day which was a gorgeous day when we were only sailing so everyone was up there. I didn't mind a long line though although it gave me more time to get nervous and nervous I got!  I really wanted to reach the bell although I knew just trying was awesome!  It was both harder and easier than I thought.  I took what I thought was the easier side and I did make it!  Woot!  Woot! 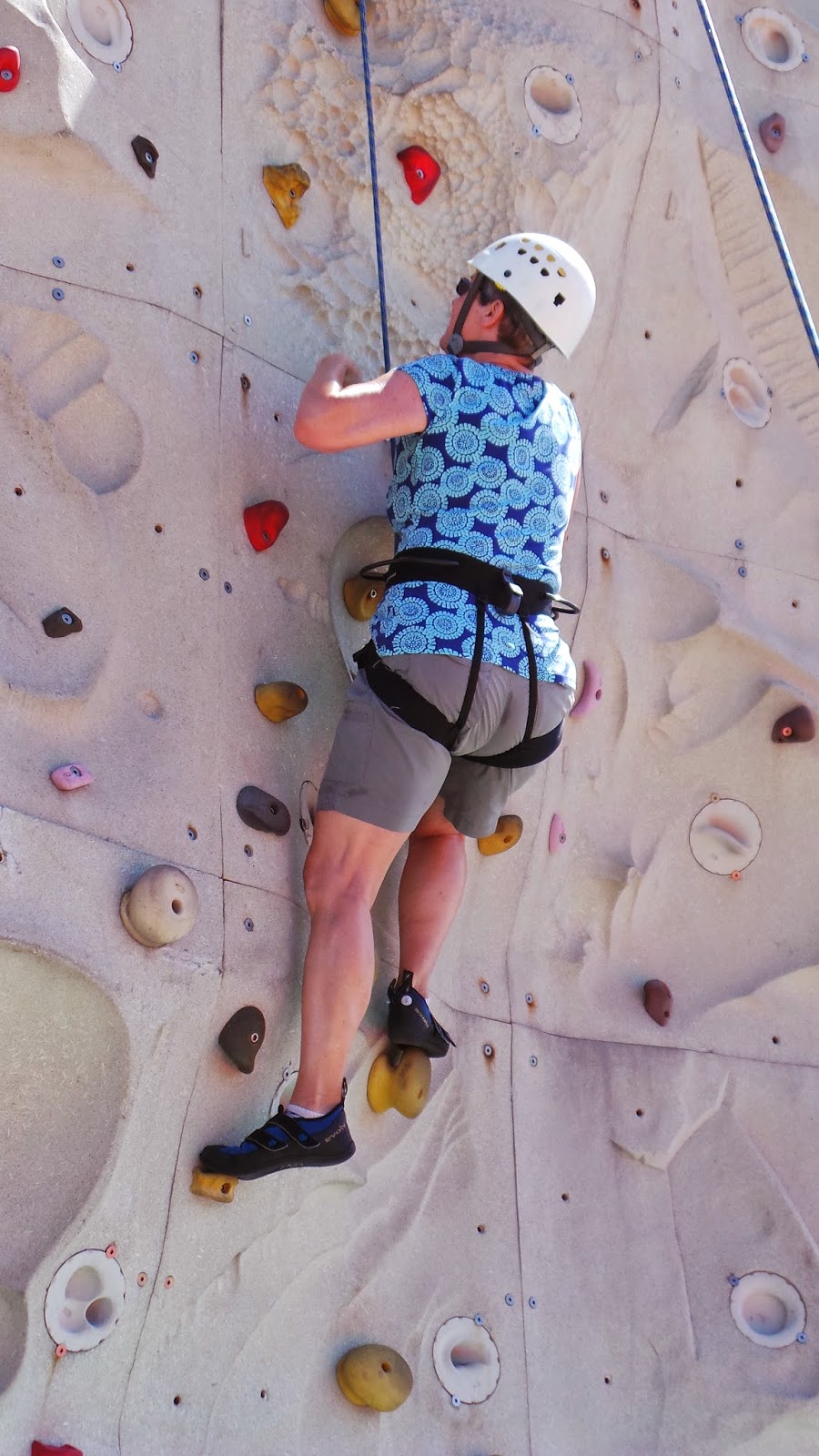 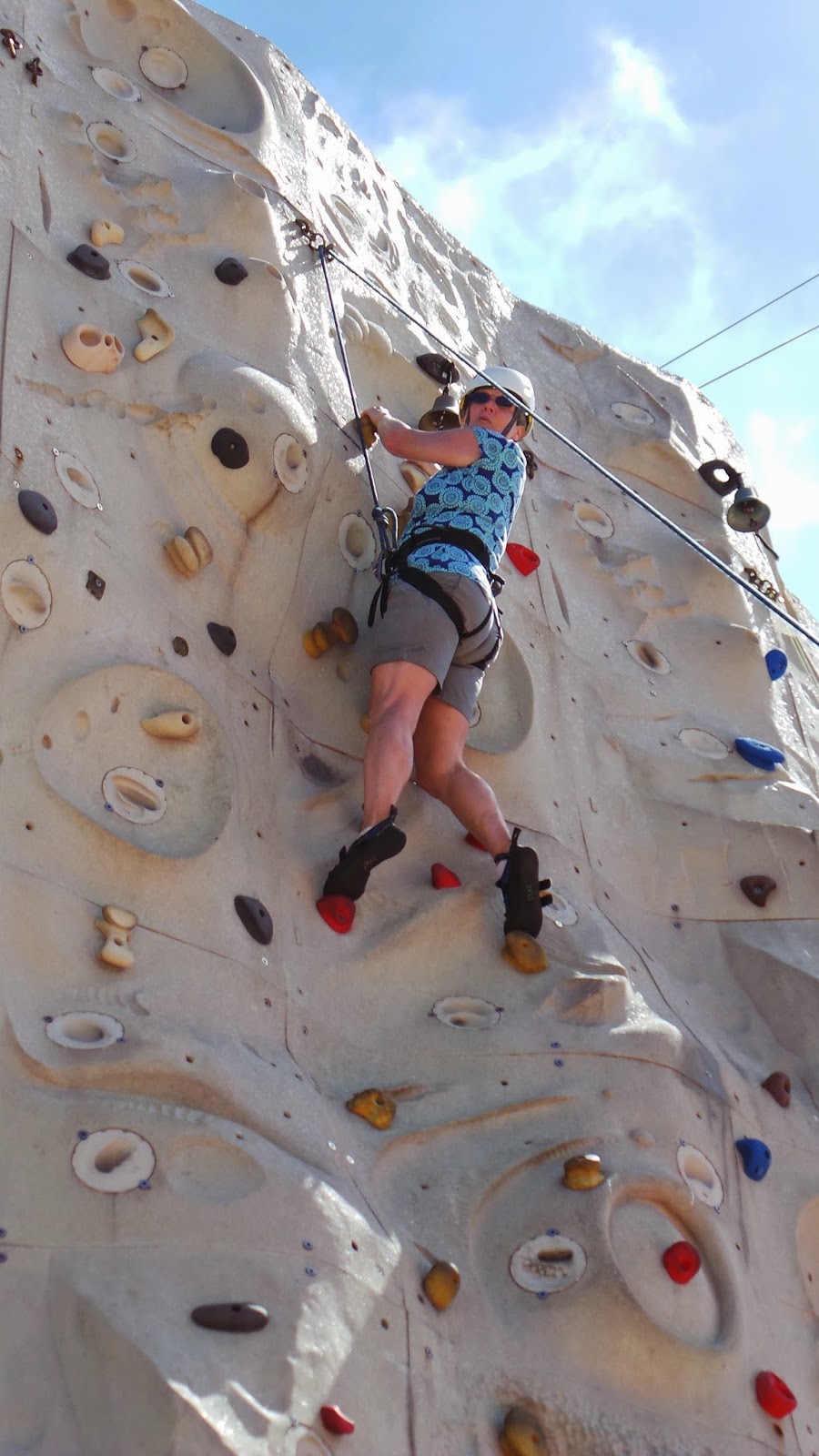 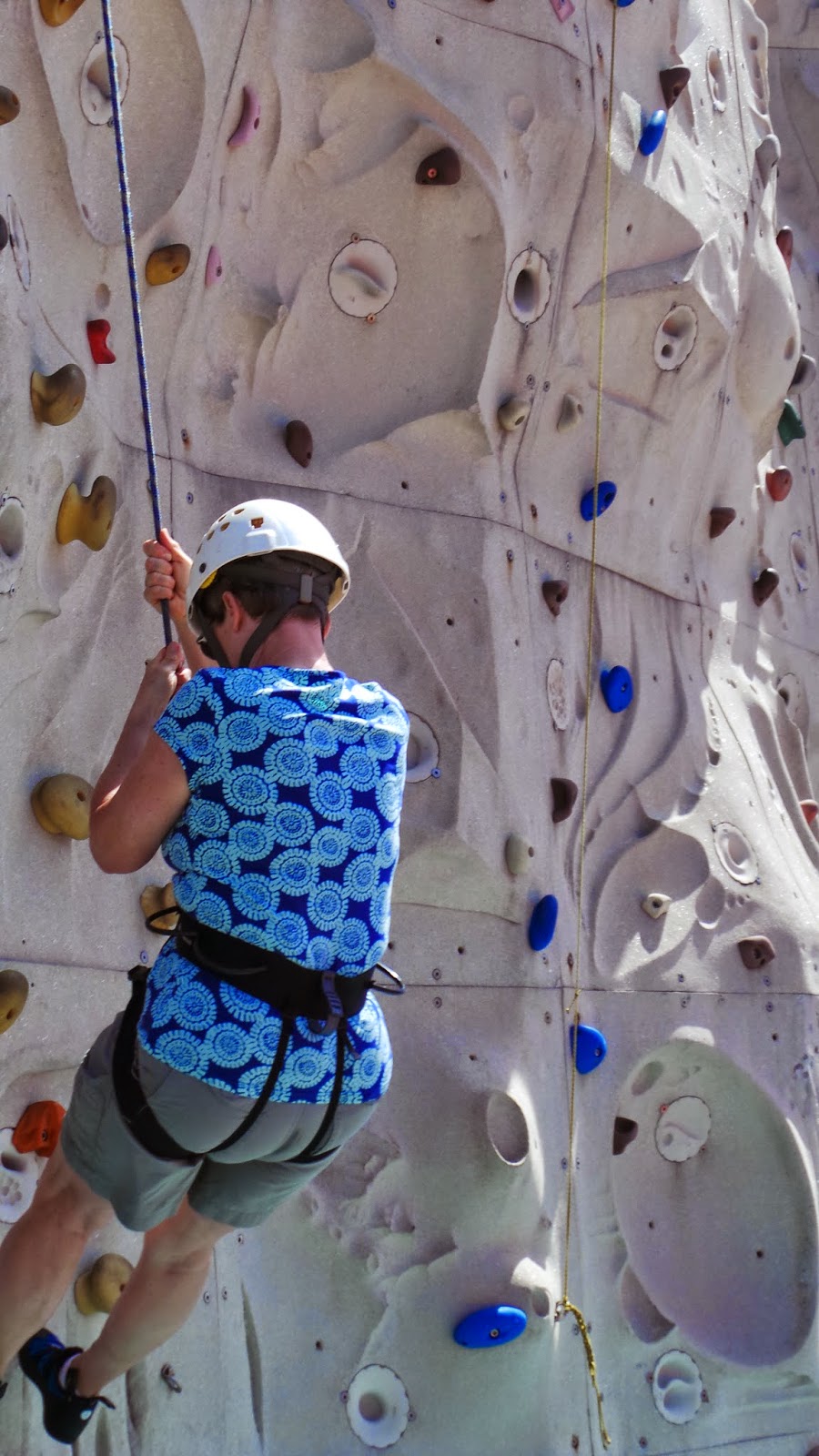 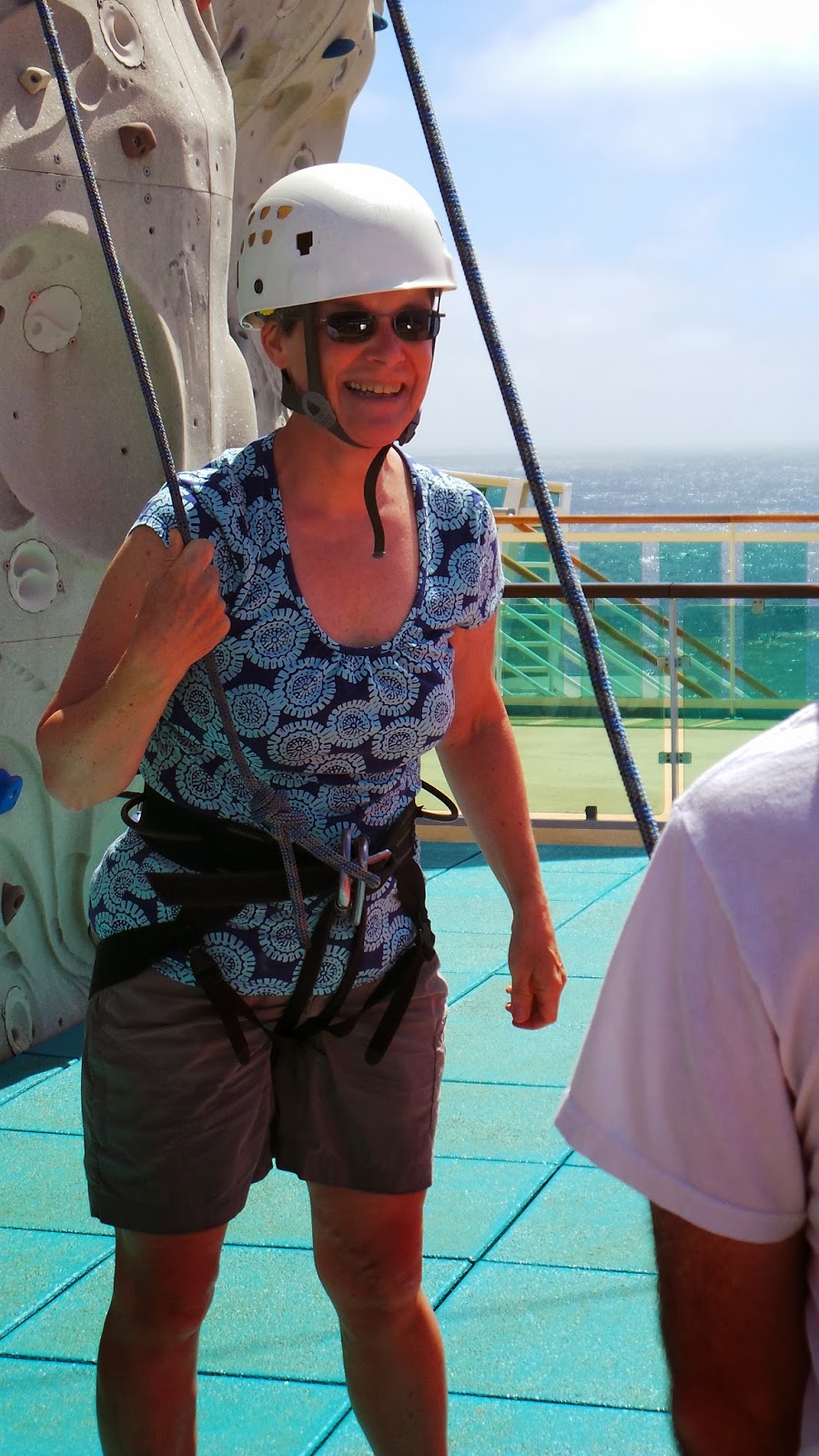 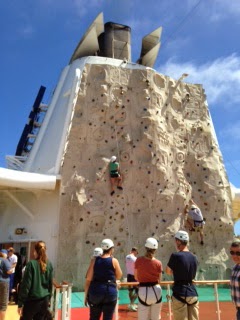 This one is my friend who did it with me just to show you perspective. Remember it was on the
12th floor of a moving ship!
Posted by ajh at 2:33 PM

Too many challenges! Indeed I prefer to climb than dancing or singing. Great photos.

It's brave to give new things a go. I might have done the line-dancing and the karaoke but I would have drawn the line at the rock climbing.

Rock climbing looks fun. Congrats on climbing all of the way to the bell!

LOVE!!!! I swear D did a bunch of stuff on teh cruise ship I wouldn't have guessed either!

I loved our alaskan cruise, thanks for bringing back those memories

How cool that you stepped out of your comfort zone and tried new things! That climbing wall looks so daunting, but it definitely looks like fun :) ...the karaoke is what would take the most courage for me, you are amazing!