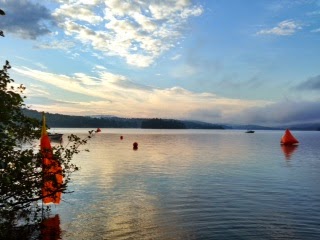 I took this when I got there, pleased for the sunny morning after
the rainy ride I had had to get there.


First, let me say I love social media.  I do not have a lot of friends who get it when I talk about racing, tris etc.  Yesterday I put a short blurb about my tri experience seeking some advice on both Facebook and Instagram.  I got a lot of advice and sympathy. I wasn't looking for sympathy (well, maybe a little) but it was nice to "talk" to people who had been there and could share their experiences. 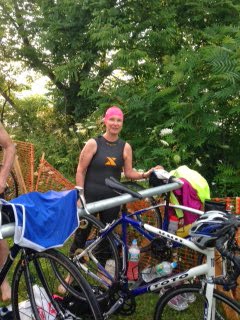 So what happened?  I had a triathlon that I have done before but they moved the start.  I am not sure why because it was not nearly as good. You had to park a mile away and ride your bike to the start with all your stuff. No one came with me but it wasn't as good for spectators either.  My least favorite change was the swim.  It was exceedingly weedy and that may have been my problem.  I had a panic attack while swimming.  This has never happened to me.  I ALWAYS get nervous before I swim but usually once I start I am fine.  Not yesterday.  We started and soon I was in tall tall weeds which just flipped me out.  It took a bit to get out of them but I never got past it I guess. I couldn't put my face in the water and breathe.  As we rounded the first buoy I knew I was in trouble but still thought I would get past it. I never did. I did the breast stroke without rhythmic breathing which I can usually do easily. I tried doing the side stroke. I even floated on my back a few times to try to get my breathing under control.  Nothing worked.  I was quickly in last pace by a lot. I knew I was moving slowly but didn't care at all other than that it was taking me longer to get out of the water. The girl on the paddle board kept asking me if I wanted to hang on.  You can legally as long as you don't move forward. At one point she went right in front of me as I think she was so sure I wanted to grab it. I was afraid if I held on I would never let go.  This went on and I heard her yell to the people close to the shore not to pick up as there was one more swimmer.  Yep, I was DFL.  (Thankfully without the dead part.) I eventually got out, WALKED up the path to the transition and got ready to bike. But before I biked I  hit the porta potty.  The swim had done a number on my digestive system and there was no skipping this stop. 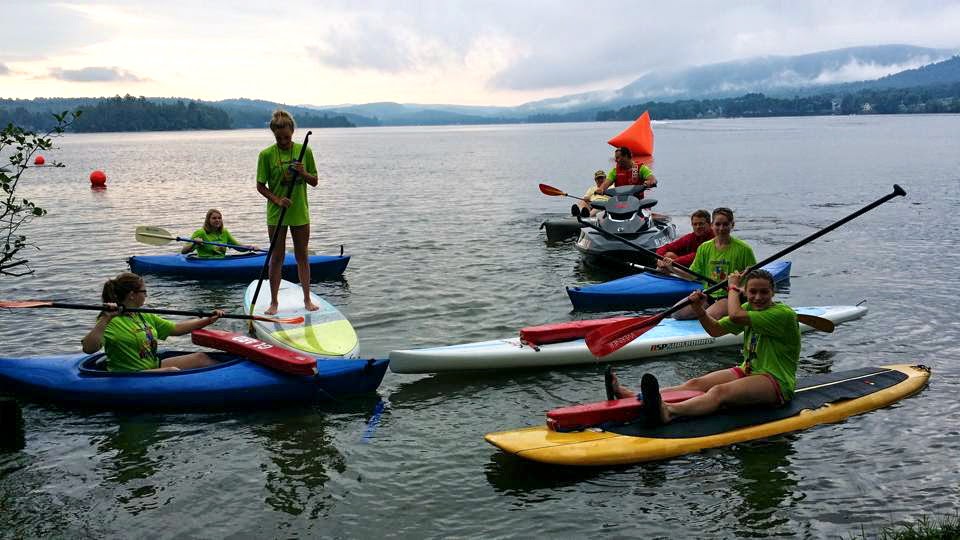 The water crew, my friends for sure. 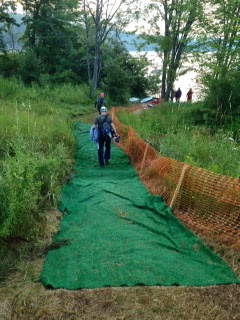 The path to transition, I did not even attempt to run.

I took off biking with the police car and whatever you call the biker who follows the last person behind me.  I thought I was doing fairly well but when I look at my overall time and pace I was not. I don't know how long I was in the bathroom but it didn't make up for such a difference between last year and this year. My pace was much slower although I felt good at the time.  I did feel like throwing up but not enough to stop.  I did pass a few bikers but not many.  It was threatening a thunder storm and was quite dark when I turned around. But the biking was way better than the run.

So I got ready for the run and took off.  I was shocked and I do mean shocked at my lack of energy.  I could not run.  I had a very hard time going 3.1 miles. I walked a good deal of it. I would start to run and tell myself I was going to run 100 steps. Nope. Didn't happen.  I could not believe I was walking in a 5K. I knew my time was going to be horrible but I couldn't do anything about it.  I just had nothing to give.  I was finally done.  It was a nice rail trail along the lake and I felt bad I wasn't appreciating it. 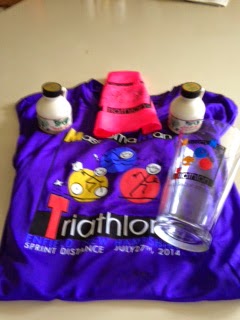 I did end up getting an age group 3rd place (about an hour behind 1st) but felt it was a showing up award.  I had to sit in a chair while waiting for the awards. Standing around so wasn't happening.

Once I got home I got done the bare minimum I needed to do and went to bed. I googled panic attacks while swimming, endlessly.  I was curious as to whether others felt it had effected their entire race.  I felt still like I had been beat up and had this horrible feeling in my chest.  I feel somewhat better today but not 100% .  I am going to try running but I am a little nervous about it.

Looking back all I can think of is the weeds.  From all that I read cold water, crowded waves, wet suits,
lack of OWS experience and other things  can cause panic attacks.  Many people experience them.  While racing yesterday I was thinking I never wanted to do a tri again. Well, I will but I am worried I have lost my love for them.  I have one in two weeks right here at home where I practice often and I think that will help a ton!

I think what bothered me the most was that it wasn't just the swimming that sucked.  Plus how truly awful I felt the rest of the day.  Stress can certainly do a number on your body. I knew that but yesterday was  huge proof for me.

Thanks to those of you who responded on FB, IG and text messages. It helped. I found myself easily tearing up which seems ridiculous but it is what it is.  I know everyone has bad days but I wasn't prepared for this at all.  Even my swimming daughter told me she had a panic attack in her first ocean swim in a tri and almost quit. I remember her telling me this at the time.  Now, I really get it.

So what was good yesterday? Let's see.

I got the last small race shirt.
I got not one but two finishing maple syrups because they forgot to give it to me and I had to go ask for one.
The thunder storm held off until I was in my car about to head home. Getting struck by lightning would have put everything else into perspective and really made me have a bad day. 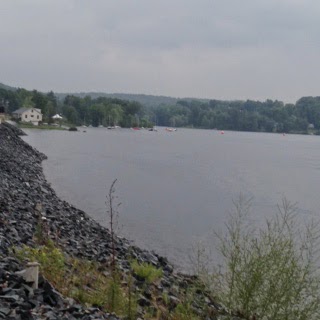 As I was leaving the skies opened up. 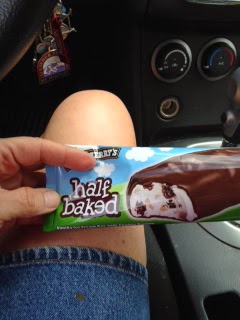 This is not the only junk food I ate on the way home.
At this same place they had a box of homemade glazed donuts.
It was unbelievably good.

So thanks for listening. Any advice welcome.

I feel for you. I know you love tris so I hope your next one is better.

My last half marathon was just horrible and my 5K wasn't much better energy-wise. I'm not sure why. I haven't signed up for another half which is unusual for me.

I'm so sorry you had such a bad race. I haven't done a tri (yet?) but I can definitely relate from similar runs. This was one that wasn't just physically tough, but mentally as well. You might need a few days to just start feeling like yourself again. I hope you get some great redemption at your next tri!

Oh yay! I can comment today. I haven't been able to for some reason so anyway....so sorry about this. Since I am still too terrified of OWS to even try a tri at this point, I have no advice. I can definitely understand how this would happen and how it would affect your entire race. Hopefully no more panic attacks for you. Very scary.

I still think it's great that you hung in there and finished. I think you'll get your confidence back in no time. I imagine a terrible swim could easily set a bad tone for the whole race. Swimming in weeds doesn't sound like fun to me. I hope this didn't kill your love of the tri!

But you finished! And if these darn things were easy, everyone would do them. But not everyone does. You'll get back at it...give yourself time.

One thing I forgot to mention in my similar horrible no good rotten tri experience, I was last on the bike after a horrible swim and when i got to T2 the volunteer asked if I was going to continue. Heck yes, I'm going to continue! I had overcome too much to walk off the course at that point. Finishing is HUGE when you have a bad day. Good job getting yourself to the end. :-)

I like your positive thinking of not getting struck by lightning, that would have made it worse. It could have been cold, rainy and windy, I you could have got a flat tire, peed your pants running. Your next one will be better.

You know, I guess it makes sense that after all the adrenaline flooding your system during a panic attack you'd be wiped out once it subsided. Such a terrible experience. I think I'd be teary the rest of the day too.

I don't think you'll have lost your love for tris, and I KNOW that you're going to feel huge relief and triumph when you finish the swim of your next tri and have conformation that this last one was an isolated incident.

Wow, that really sounds bad - I'm so sorry you had to go through this. Those weeds would have freaked me out, too. I have to say, though, kudos to you for hanging in there and finishing! And I hope you're feeling better today.

Sorry to hear you had such a bad race. The next one will be better. Be positive!

Panic attacks are horrible. They just sap you of all your strength and will to go on. The fact that you continued the event is beyond impressive. Most people would have quit.

I'm sorry it was such a horrible race but I always look at the bright side of things: yes it sucked but you did finish, you never gave up and that's something to be very proud of and ... after a bad race always comes a good race.

I am impressed that you gutted through the difficulties. That alone makes you a winner!

Well, I can certainly attest to stress causing your body to shut down, so I can empathize to your grogginess all day. I admire the heck outta you for persevering, even though it would have been easier to give up. Not every race is going to go well...kudos to you for sticking it though. Now, next time there's weeds in the lake, you will know what it feels like and won't be so alarmed :).