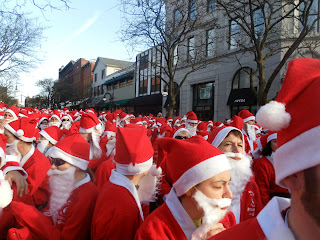 As we were lined up for the race there were Santas as
far as you could see behind us....... 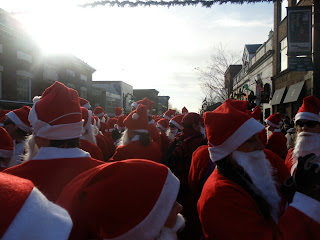 .......and in front of us.
This race was a blast!  I loved seeing hundreds of Santas in every direction.  As I drove through Burlington to park this morning I saw several Santas warming up.  I never thought I would find my friends in the sea of Santas but I found two friends and one other friend found me.  Several people had individualized their outfits. One lady wore a green lei which was genius as she was very easy to spot. It was fun to see school kids also racing dressed up as Santa. 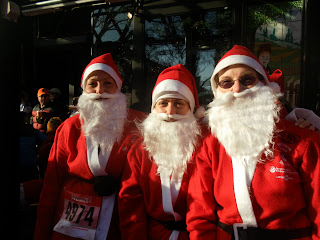 I actually found my friends, Christa and Becky. 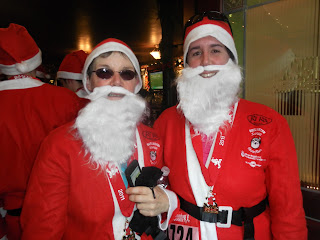 I had decided I wasn't even going to try to race.  I left my Garmin at home and carried my camera in my hand to take pictures.  I stopped a few times for pics but took many on the run. The suits that we were given were very cheap. I wasn't sure I would be able to keep the pants up and saw more than one person stopped trying to fix theirs.  The worst problem was the belt and wisely many people wore their own.  Note made for next year.  I had to stop about half way as my belt broke.  I tied it together but it never worked well the rest of the race.  My coat kept flopping open to show my - horrors - blue shirt!  I didn't think my shirt would show or I would have worn black or white. 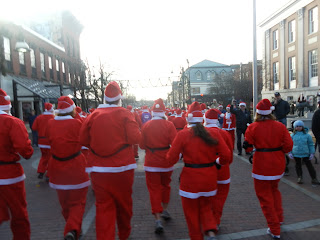 The race has started. 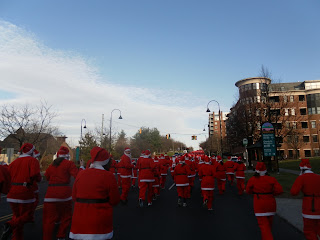 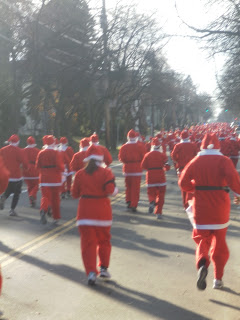 This is Willard where I had to fix my belt. 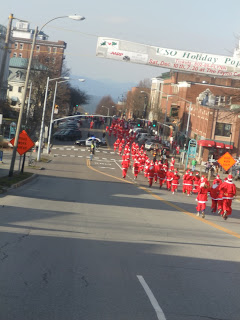 Headed down Main toward the finish. 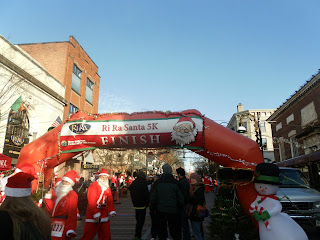 Here is the finish. I took this picture before the race.

It was great to see all the people watching the race.  Kids got high fives from Santa after Santa. As we headed up Battery Hill cars were stopped.  Kids were watching us from inside the cars with eyes as big as saucers!  It was awesome!


There was a feel good attitude for this whole race.  Afterwards I did some shopping and kept forgetting I had this Santa costume on. No problem though because so did many other people in the crowd. It was quite hysterical.  Many people asked about the race and talked about doing it next year.  This year they cut it off at 1200 but they announced the cut off next year will be 2000.  I suspect it will fill quicker as so many more people know about it now. As I type this I am waiting for the news to show a clip from it.  There is going to be a You Tube video which I will share when I can find it.

There was a mat for both the start and finish which is not usual around here. Plus there were medals - nice ones - for a 5K! And a top notch breakfast after at one of three locations to help with crowds.  This may have been an inaugural race here but it was very well organized.  It's one I can see becoming a December tradition. 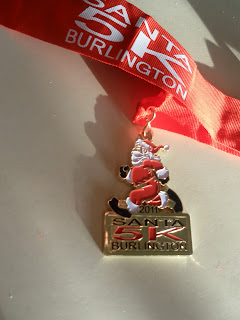 It's an awesome medal.  I will definitely take
it to school to share with my students.
Posted by ajh at 7:14 PM

So cool getting a medal for a 5k. I wish I lived closer!!

that really looks like a lot of fun. and you got a metal too. woot!

Oh my gosh that looks like so much fun! Love the medal too :)

I had so much fun. Becky and I found a friend while running and then after as well. It was a great run, I won't call it a race, because I didn't race or push myself until the end (running up Church Street).

That race looks like a blast! What a great medal, too...and breakfast after? Nice! It certainly sound like it was well run.

I love the image of you out shopping in your Santa suit. Maybe next year they'll give a discount if you already have a Santa suit. :)

And you know that wasn't "the" race report. :) It's just waiting for a few more pictures and additional commentary.

Wow! Your Santa run is much bigger than ours...we don't have costumes, though we all wear hats. There are no timing chips, no medals and no big breakfast. But it was still lots of fun :)

Sounds like you had the best attitude going in...just to have fun and enjoy watching the wonder in kids faces as they see all these Santas running by :)

oh my gosh taht is awesome

Ha ha! LOL! I have never seen that before, how funny. It's fun to just run and not race, leaving the Garmin home is a really good thing sometimes!

That looks like such a fun run to do. I loved the pic where you could see Santas running all the way up the street. Santas as far as the eye can see! But how confusing for any of the younger spectators who were still believers. Which was the REAL Santa?

I absolutely love it!!!

What a fun race, I love it.

That is a whole lot of Santa going on there!

That is really super! I don't think we have a santa race here in SA.

Love it! We have a Santa run coming up next weekend..it is hillarious to see the really crazy fast "santas" busting it to the finish line with their beards flying around..

What a fun race!!! Good you left Garmin at home. I don't think Santa uses those, or does he???
I love the medal.

Such a fun race. I'd love to do something like that.

Wow, sounds like a lot of fun! And that is the cutest medal I have ever seen!

What a great medal! I am glad you had a great time.

That is just so cool! We have a solstice race in Dec (coming up in a few weeks) and there are always a few "santas" who do it. My goal last year was not to let anyone in a santa suit pass me. Guess that wouldn't work at your race!

It looks like a great race, and that is one of the nicest medals I've ever seen!

so adorable! and i love the medal!!

So fun! And you get a medal! That's a 5k worth running for sure.

Excellent race! And what a cool medal! There's a Santa race not too far from here...need to do it one of these years...

I would actually LOVE to write. That was what I originally (pre-kids and marriage) started to go to school for. My dream job would be doing the stuff I wasn't to and writing about it and getting paid for it. As for coming up with my own stories, I don't feel like I have anything to write. Yet, anyway.

This looks so fun! All the Santa suits look professional but I have to think many were homemade! Surely Walmart does not carry this many! :) the medal is especially cute

Wow, what a neat idea. I love all the suits and the medal!

That's race looks fun and I'm sure you had a great time! Nice medal, specific for a Christmas run!

I wonder if we will get medals tomorrow?

The breakfast is awesome though.

What an incredible race! Never seen so many santas & great medals. Awesome!

This looks like a fun race! And that's awesome that they gave out medals for a 5k :)

That race is too fun!
Very nice (and unusual) medal.