Yes I had tons of goals in 2011. The way I look at it is lots of goals means lots of success.  I repeat a lot of them like racing with my family as that is just the best thing ever. It takes no special skill on my part but I still list it as a goal perhaps to keep track of it.  I am sure I will have similar number of goals for 2012.  I am usually a rather succinct person both in writing and talking but NOT apparently when it comes to thinking about my passions in fitness. 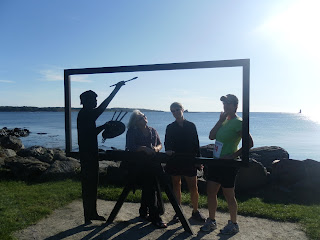 Goofing off at the Great Island 5K
12. Have one overall PR in any distance. Mostly Fail
I had a PR at an 8K and a 10 miler because they were  new distances.

13. Race near the ocean. Success
This is one of my favorite goals.  I raced near the ocean 3 times, twice in New Hampshire along that tiny strip of ocean and once in Rhode Island. 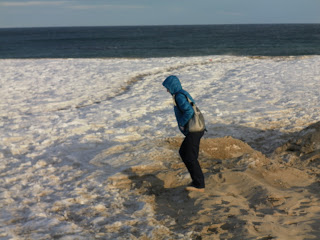 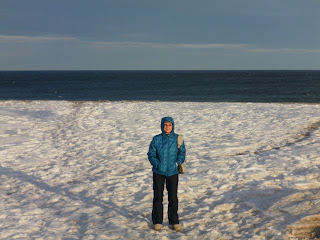 Yes, you wish you were racing by the ocean in
February in New England too!
14. Race with some bloggy buddies, old and new! Success - not as many as last year but that's okay. I got to race with Darlene twice who doesn't really live close but in my world she does (about 2 1/2 hours away.)  She is also a racing nut like I am. I also got to meet "Dash"  (and Liz) when I went to DC and I won't be surprised if I run into her again.  Love her posts and she is one fast racer! 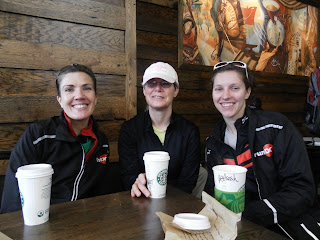 15. Secret goal- find a duathlon and race in it! Tell no one as when they see you show up on a mountain bike looking not one bit like a bike racer they may not let you enter! Be prepared to come in last. Yes Yes Yes!  I did this and was quite proud of it. I thought I would come in last but I beat several people even though most everyone had a road bike.  I'll be back next year hopefully with a road bike of my own! 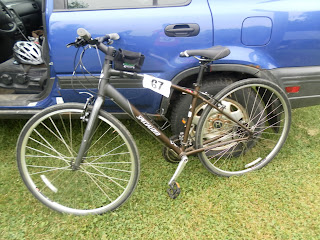 Congrats on achieving most of your goals. Wow.
And yes, it is my dream to race in winter by the ocean as long as it is in CA. :-)

You have great goals! I want to race by the ocean... there is a half marathon at the beach that I want to register for but it's on the same weekend as a 10k I've done the past 5 years and can't decide between the two. Maybe the beach will win out.
Maybe someday we'll get to race together when you come visit Emily in DC. :)

Another GREAT year for AJH! Some fun goals too, although racing by the ocean is a bit more of a logistical item for us :)

I'm lucky because I have blog buddies right here in town. It makes it a little easier to race with them. :)

I knew you'd do well in the duathlon, and I think you're going to really surprise yourself in the tri(s).

Good luck getting through these last couple of days. Have a wonderful, wonderful Christmas!

I love # 15! Look at where this year has taken you, and what you have on deck for next year!! Keep living it up, my friend!

I think you did really well and had fun doing it too!

Now next time you are in DC, let me know so we can meet up (and a bonus would be meeting Emily, Cheryl, Katie, the long list of DC bloggers!)

You've had a wonderful year. I think I'm going to copy the race by the sea one as I've got one on tap in January.
Hopefully 2012 will be the year I meet you IRL!

I remember when I got your text message about finishing your DU - you were so stinking excited...and I was smiling ear to ear for you! I hope you find many more in 2012, and tri's too, I think they are going to be a great fit for you!

I have always wanted to see that tiny bit of ocean along the NH border since I was a kid. One day, when I come and visit you :).

love these posts. you've had such a great year!

You've had such a great year! It was so fun to finally meet you and I look forward to seeing you again this year at Cherry Blossom. You are sure to rock the PR out on that one!!!

Great goals and results! All the best for 2012!

I really like that you can have a secret goal and still follow through with it. A lot of us have to make ourselves accountable to keep striving for our goals but you're totally self-motivated.

Nice post. Congrats on achieving many goals.
I am laughing looking at our difference:
- Be in top half of field: 2 of 15 (1 abroad in Scotland and in the Race of the Cure where many persons are not real runners);
- No PR;
- Race near the ocean: NO of course
- Race with bloggy buddies: NO again
- Duathlon: No .