I am thankful for my Pro Stretch. I don't think it is the cure for PF it claims to be on it's website but man does  it help. I left it at work accidently (some days I take it with me thinking I will use it - that so doesn't happen) but I did drive back and get it. 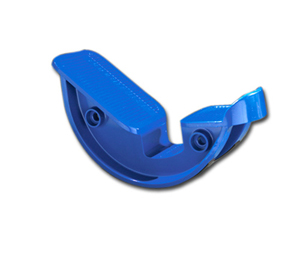 I am also thankful that November and December are dry months for racing.  Why you may ask when I LOVE to race?  Well, as I begin this rebuilding period of running I am sure that racing is not what the doctor had in mind when he said I could begin running again.  The night before I began I dreamed that I was at a start line of a half marathon for my first run. I knew I shouldn't be doing it but in my "dream world" I was going to run it but not race it!  Yeah, right!  So it is just as well that the turkey trots don't tempt me and the only race in December is on December 31st.  I missed two months already in my quest to race every month (I did accomplish this in 2009) so no pressure there.  So I am just going to run with no major agenda other than to listen to my body, begin to run a little faster and take those rest days!
But truthfully I would rather be: 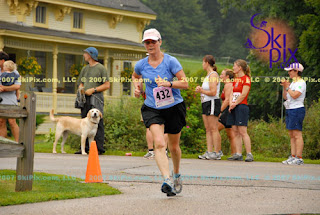 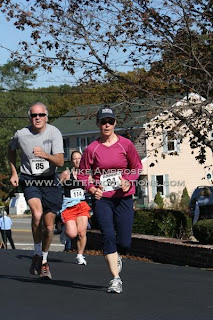 Or a 10 K (this is my hubby behind me, notice
I said behind) 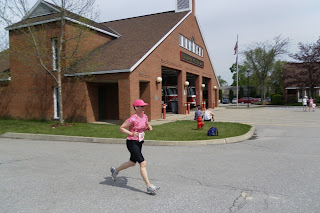 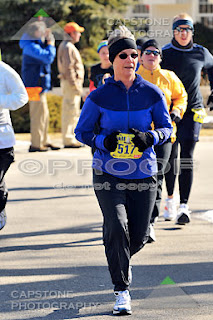 Or even a cold half marathon in February 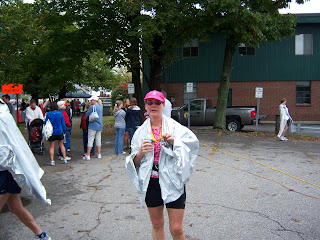 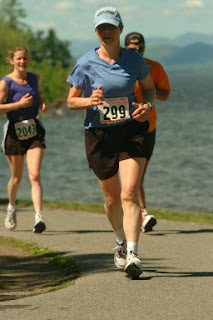 Rather than a spring marathon
(isn't this pretty - come
do VCM!)
But no, I will not race.  Thank goodness there are not a lot of races right now or I would certainly be tempted to throw caution to the winds............and race!
Posted by ajh at 7:50 PM

As always, I love all your pics. I can't wait until you are racing again, too!! Good for you, getting back to it slowly.

I've never tried that foot device thingie but I've seen it many times in the mags and have always wondered. Chris K gave me this tiny ball with spikes on it and I roll my foot frequently, which I guess helps....or he claims it does but I'm not sure. The insert has helped the MOST I think.

You and me, girl, need to be out there racing again SOON!!! Unfortunately, I've lost soo soo soooo much speed and it's just killing me. one step at a time, though - right?? Yes! And I so badly want to do Vermont Marathonm, it's high on the list!

Totally botched Marathon...but you get the picture :).

I am glad for you there are not many races now. Gee, you barely started running, girl! Now while I am not a racing type, I know how it feels to finally have hopes for longer and faster runs. Hopefully you will be smarter than I was and will transition with some restraint.
Have a wonderful Thanksgiving.

one of these days i will need to cross VT off my list of states... guess i'll have to do one near you so we can hang out! :) or we could even do it together!

pics are great, really like the one in front of the fire station...

Don't you just love beating your husband? Or any man?

That February half marathon looks really cold! I've only done 2 races this year - missed 2 I had entered, and I can't wait to get stuck in next year - hopefully!

You have plenty of time and I'm sure you will race again.

I have only one race left this year and it's on December 31. I did the same one last year and what I loved about it was that it's a perfect ending of an active year.

About running in Winter: I don't mind running in the cold. I've got a thermo shirt and pants, head and gloves so I'm never cold. What I don't like is running in the dark because most of my routes don't have street lights. That's why I go indoors on weekdays. When I'm free on a weekday and I have to run I go outside.

Love seeing all your racing pictures!

I love my pro stretch, I bring it with me on vacation! Happy Thanksgiving!

Seeing your pictures makes realize that you have run in just about as many races as me! You are a race junkie too:)

Have a wonderful Thanksgiving!

Very wise words indeed! You will be rewarded for this and run many races more. I love all those photos!

Love the race pics! Lots more where those came from!

Happy T-day EVE to you!!

Sounds like a VERY smart plan. Glad the racing is quiet in your area, so you don't have much temptation coming up. Yep- you, Julie and myself = race junkies for sure.

Hubby behind you during the race, but I wonder who finished in the lead at the end. I think it is so frigging cool that you guys run together. Speaking of cold, it got down to 51 tonight. BRRRRRRr

Sorry, but I am glad that there are not too many races around you now. You have worked too darn hard to "throw caution to the wind". Besides, you are soooo close, you ran last weekend! BTW, I am still smiling about that for you!

What a beautiful photo (the 4th one) of you while you were running a cold half marathon :)

Thanks for visiting my blog! I'll became a follower of your enjoyable running blog :)

Running makes us feel good. Have a nice training!

Caramel slice is yummy and a little wicked. It's got a coconut/biscuit base, a layer of caramel then a layer of chocolate. Happy to share the recipe if you want.

hi ajh, I did not buy the boots! I could not find any on sale and I could not give up $298 for boots. I did order a Kindle, a winter running jacket and pics from the Richmond marathon! I really only needed the pics!:) Oh well! Hope you have a great weekend!

Oh I so love all of your race pics! Especially the one with hubby BEHIND you! Glad you're up and running but I think you're wise not to push it and race just yet. Hope your Thanksgiving was wonderful!

Great race photos! You're smart in holding yourself back for now...I'm trying to play it smart after an injury but really I want nothing more than to be back in the racing again!

Being that I am SO impatient, please email TODAY(if you can!)and fill me in on your heel spur recuperation from start to now, please :) ! I knew all this time that you had a heel problem but I didn't know what this whole recovery entailed. I'd love to hear your story!
Nice race pictures, I'm sure you can't wait to get back, I get it!