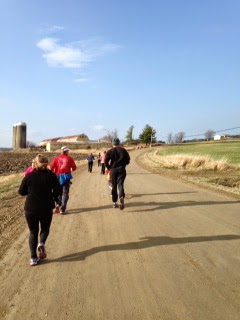 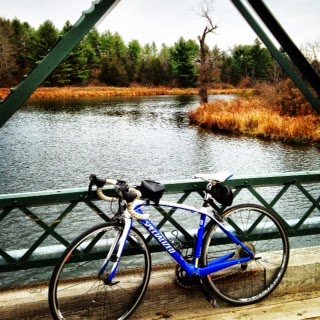 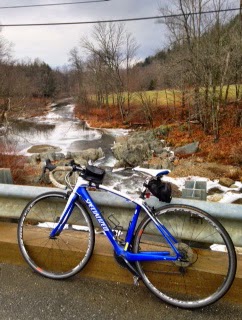 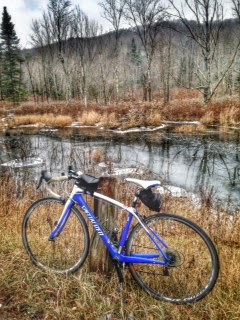 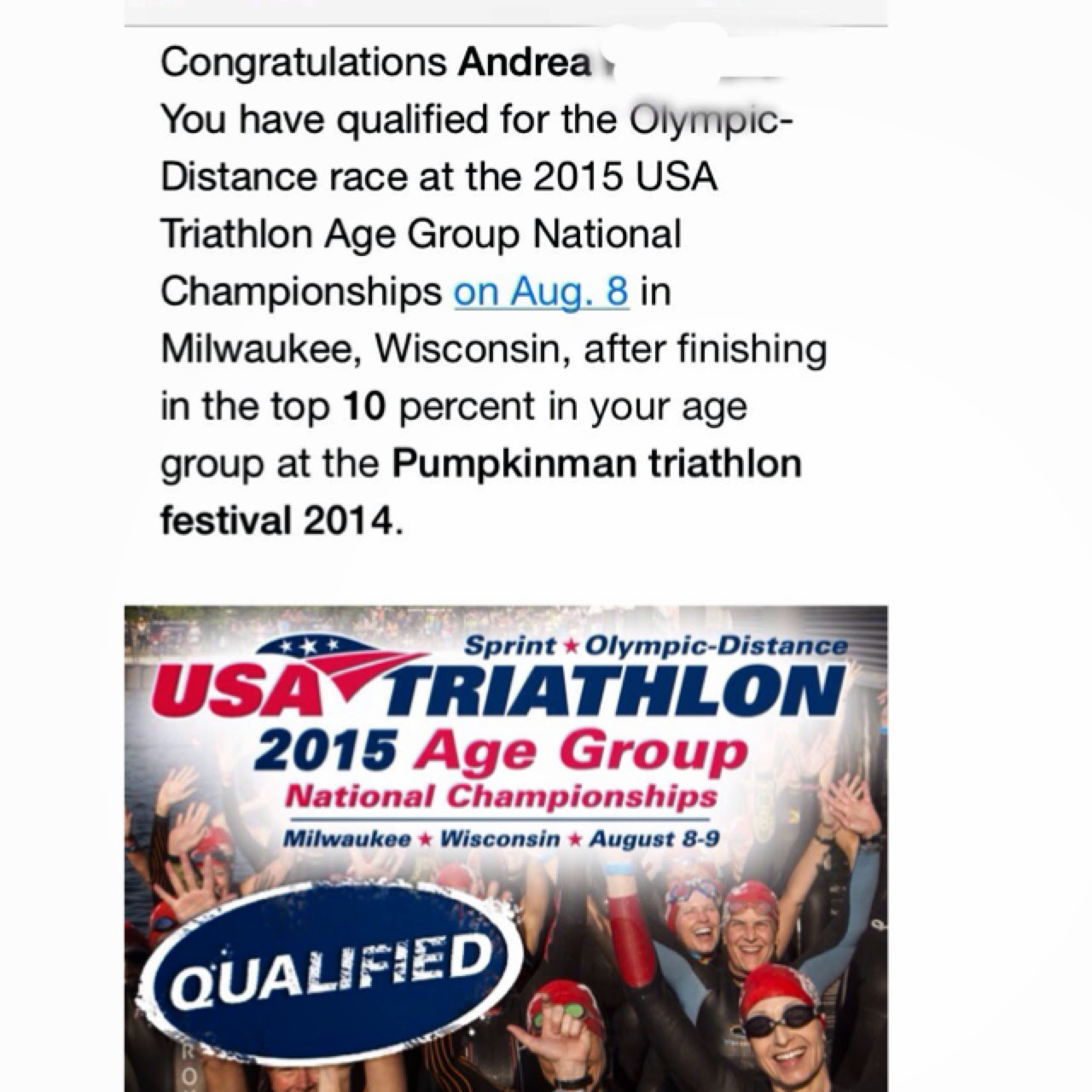 3.  Last night I got an email which first caused me to laugh and then just be astounded.  I qualified for the USA Triathlon 2015 Age Group National Championships.  It was from the Pumpkinman when I won my age group.  There were very few of us soooo.  But I'm going to be proud.  First, I am out there doing it. Second, I haven't been doing tris long so hey!  Third, I had a really horrible triathlon experience this summer and I didn't quit that race or let that experience stop me from doing more this summer.  The championships are in Milwaukee and I can't see spending the money to come in last!  The odd thing is I qualified for the Olympic distance which I have never done.  But it's neat to be able to say I qualified for a national event.
Posted by ajh at 7:32 PM 14 comments: 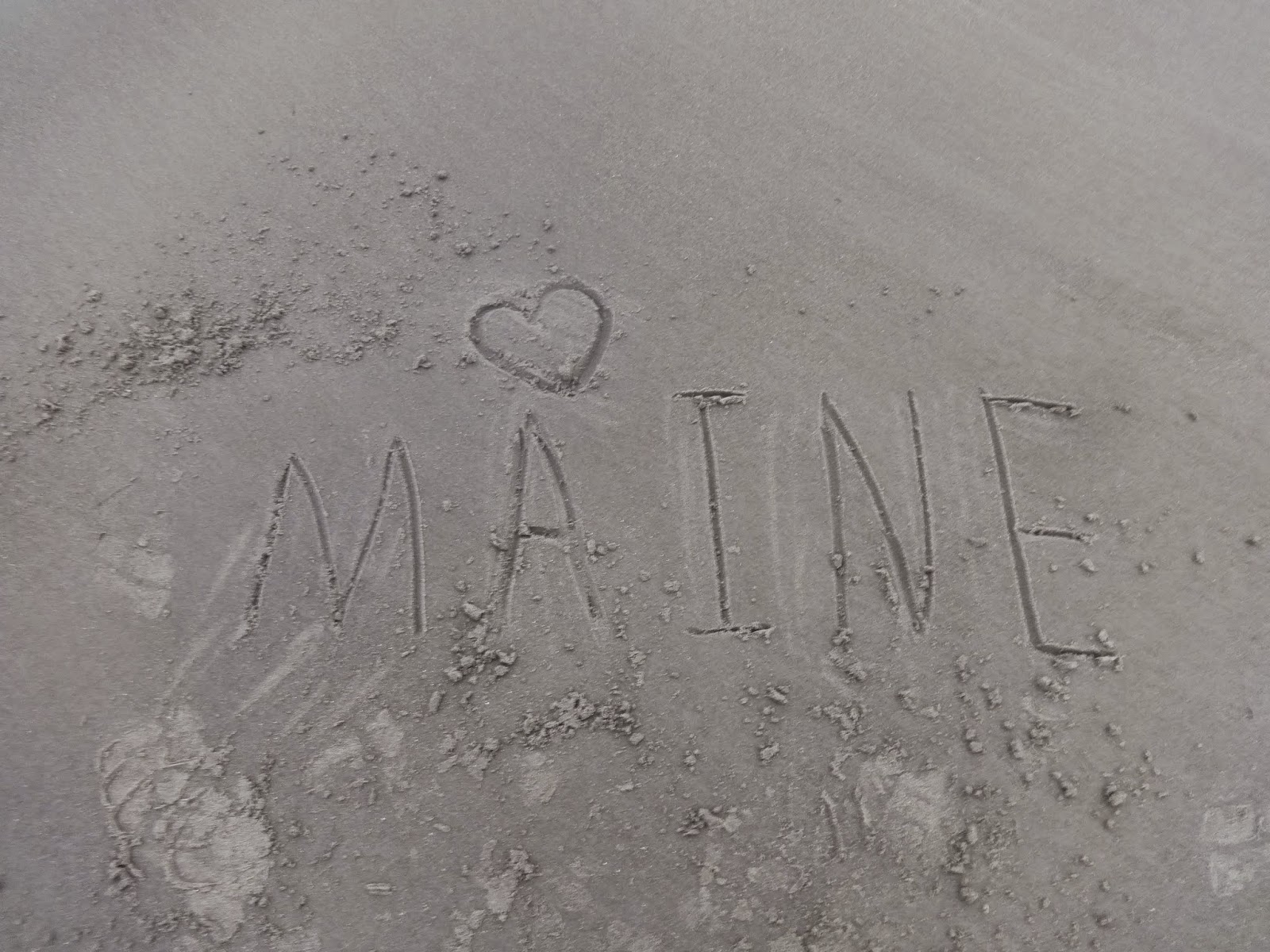 I am still a resident of the Green Mountain State but with the number of pictures I post of Maine on my IG account people might wonder. 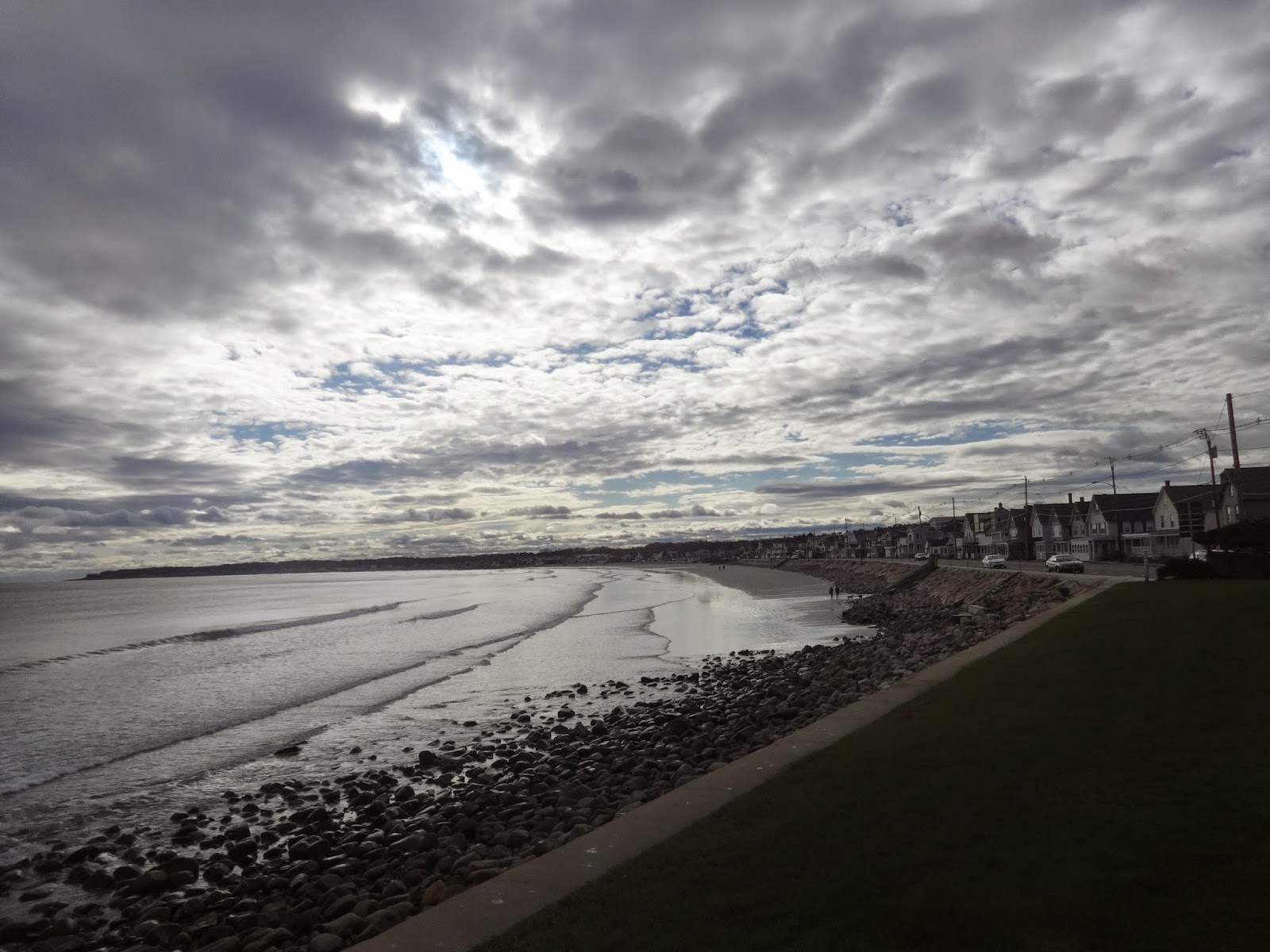 Stayed in a new hotel. The ocean was right out the window!
I have to say it kept me awake.


I did some night work and got Friday off so my biking friend and I headed to Maine.  We knew it would be cold but we were prepared. We actually lucked out in the weather department. We decided to go two nights instead of 3 which worked out well in many ways.  When we got there on Friday it was raining but after a short stop at Eddie Bauer (and some great scores) we got to the hotel and it was not raining.  Friday became sunny, Saturday was glorious and Sunday was cloudy. All days were cold with Saturday being the coldest. I am not sure if it reached 40 but if it did it was the low 40s.  It was basically 44ish most days we rode.  It was also quite windy on Saturday. 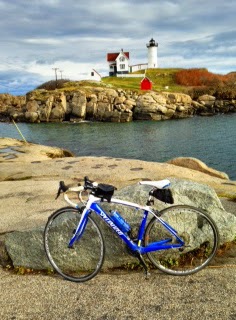 One can't take too many pictures of the Nubble. 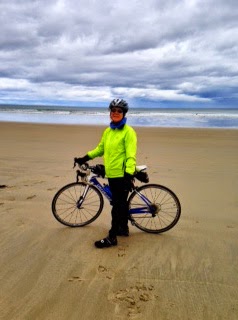 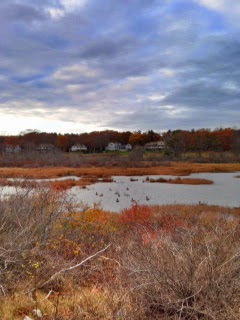 Friday we did one of my favorite rides up past Nubble (always go past Nubble - in any direction) and then up to Ogunquit to the beach with a spin around Perkins Pier. We were savoring the salt air and the sight and sound of the ocean. 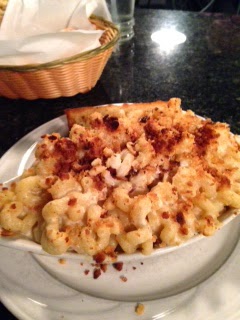 After some wonderful lobster mac and cheese we fell asleep super early, the theme for the weekend.  Up early, exercise all day, eat, sleep, repeat. 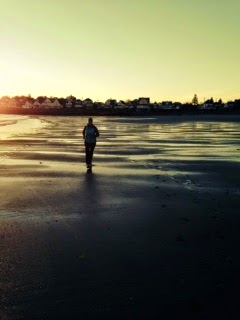 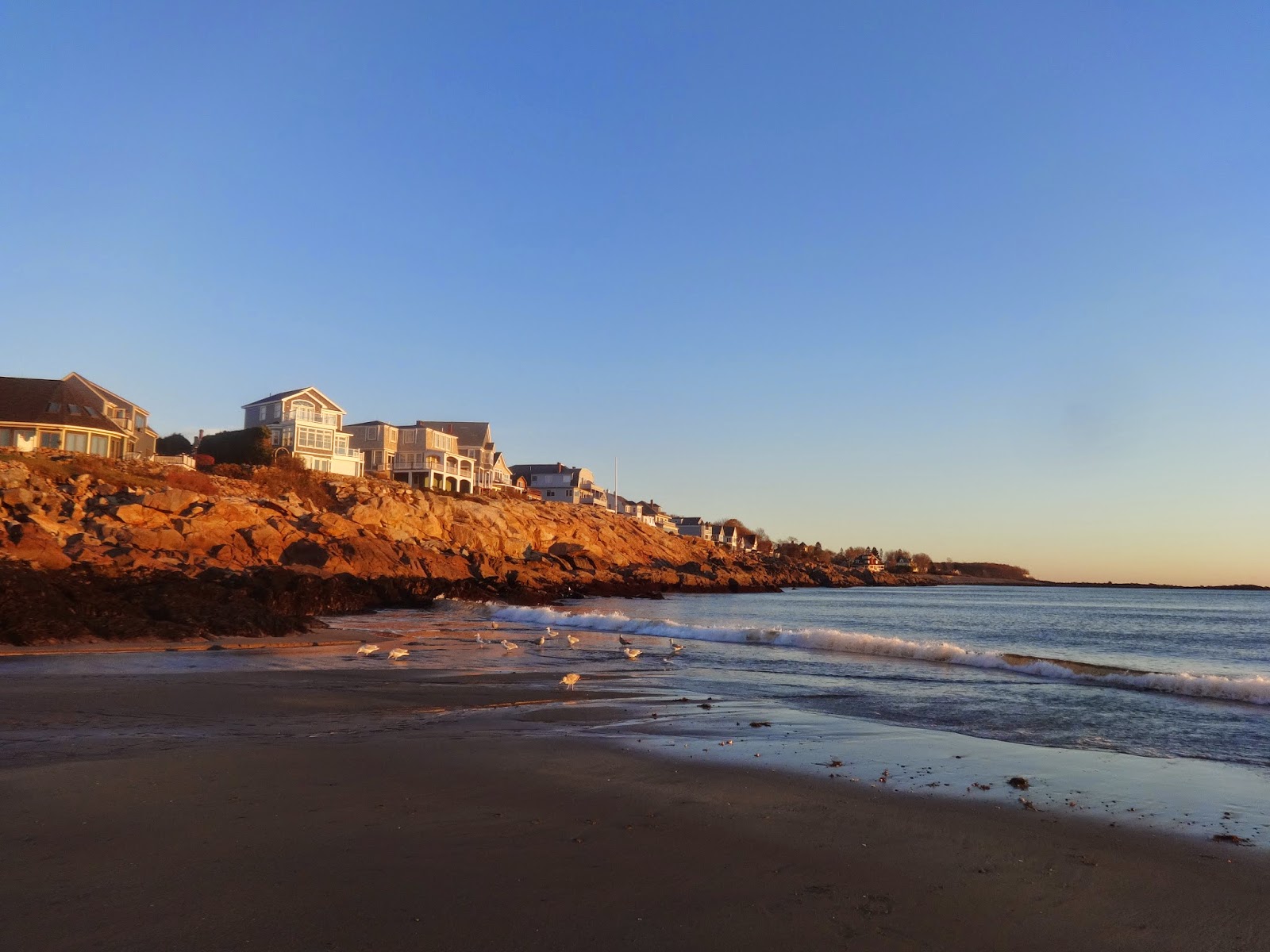 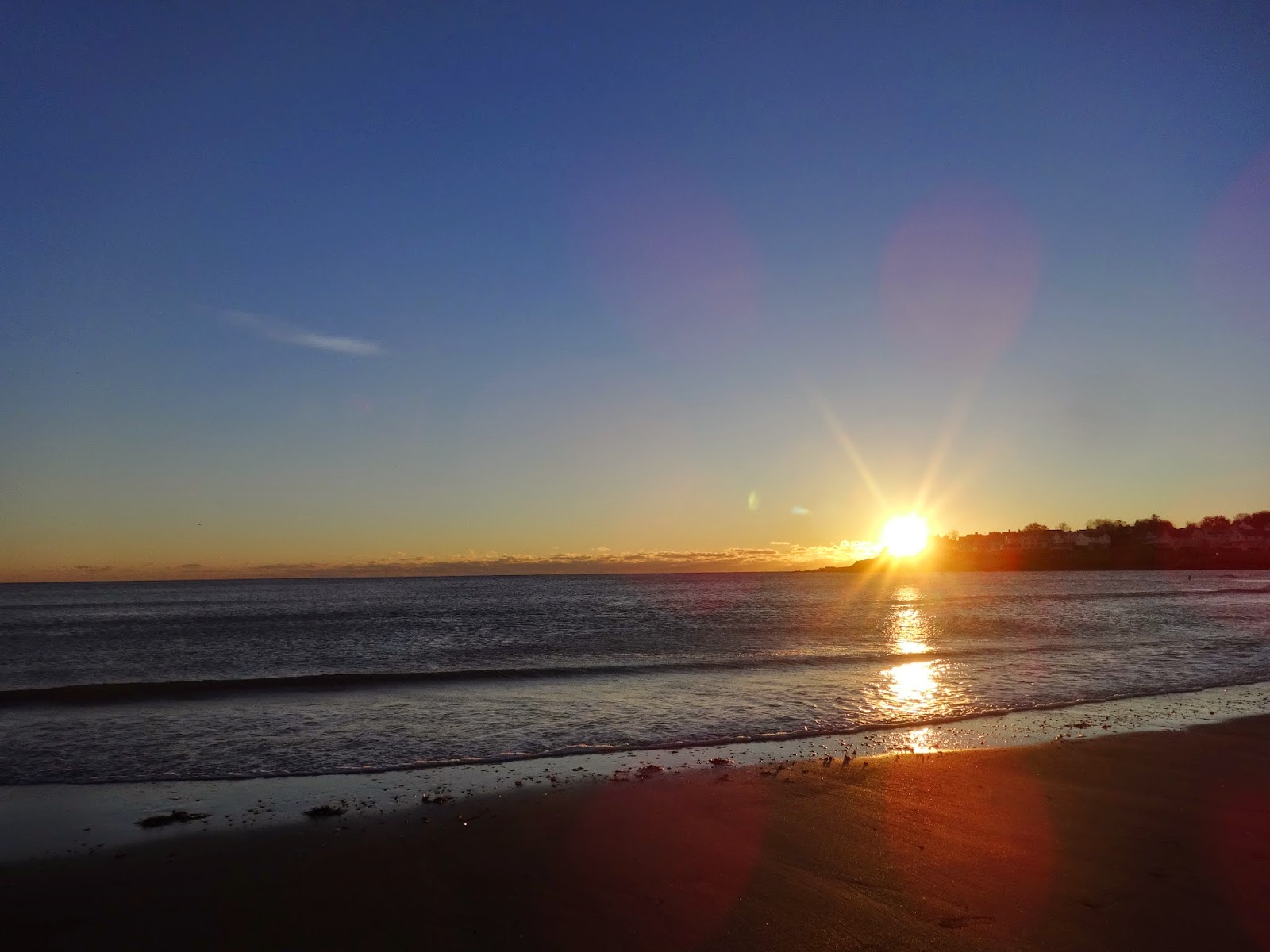 Saturday I had a WONDERFUL run.  Maybe I can fall in love with running again.  It was too cold to stand at the Nubble for the best sunrise so no great pictures there but I had fun on Short Sands getting some good shots.  When I got back to the hotel we went out to breakfast but didn't hurry because it was still so cold. We really should have hurried more but........ (foreshadowing)  We finally started out BUT I forgot my helmet and we had to go back.  I had my headband on so it "felt" right until I felt the wind in my hair. What?  Oops, no helmet.  Back to the hotel.  We stopped at the suspension bridge where I have run but never "biked" and played a little.  My friend that I was riding with seems to delight in some of the same things I do which makes it more fun.  It was just gorgeous with lots of foliage left. We went on Route 103, a new route  to me, which was just wonderful.  We crossed into NH over the Memorial Bridge, the bridge I ran a race from a month ago.  It helped me know where I was. I have never ridden south from York. 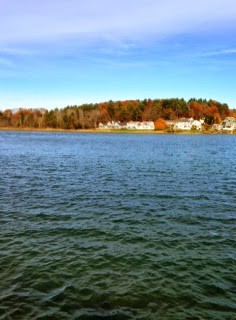 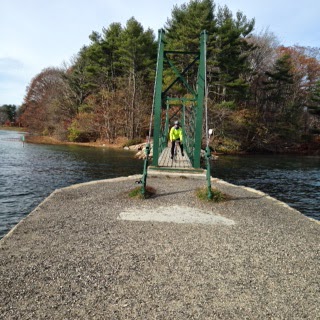 I have run on this but never "biked" 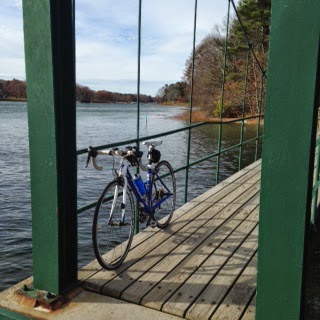 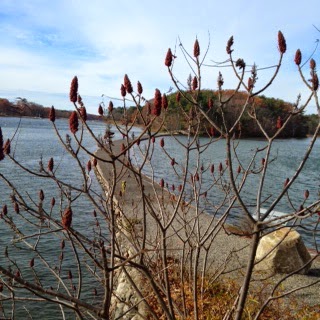 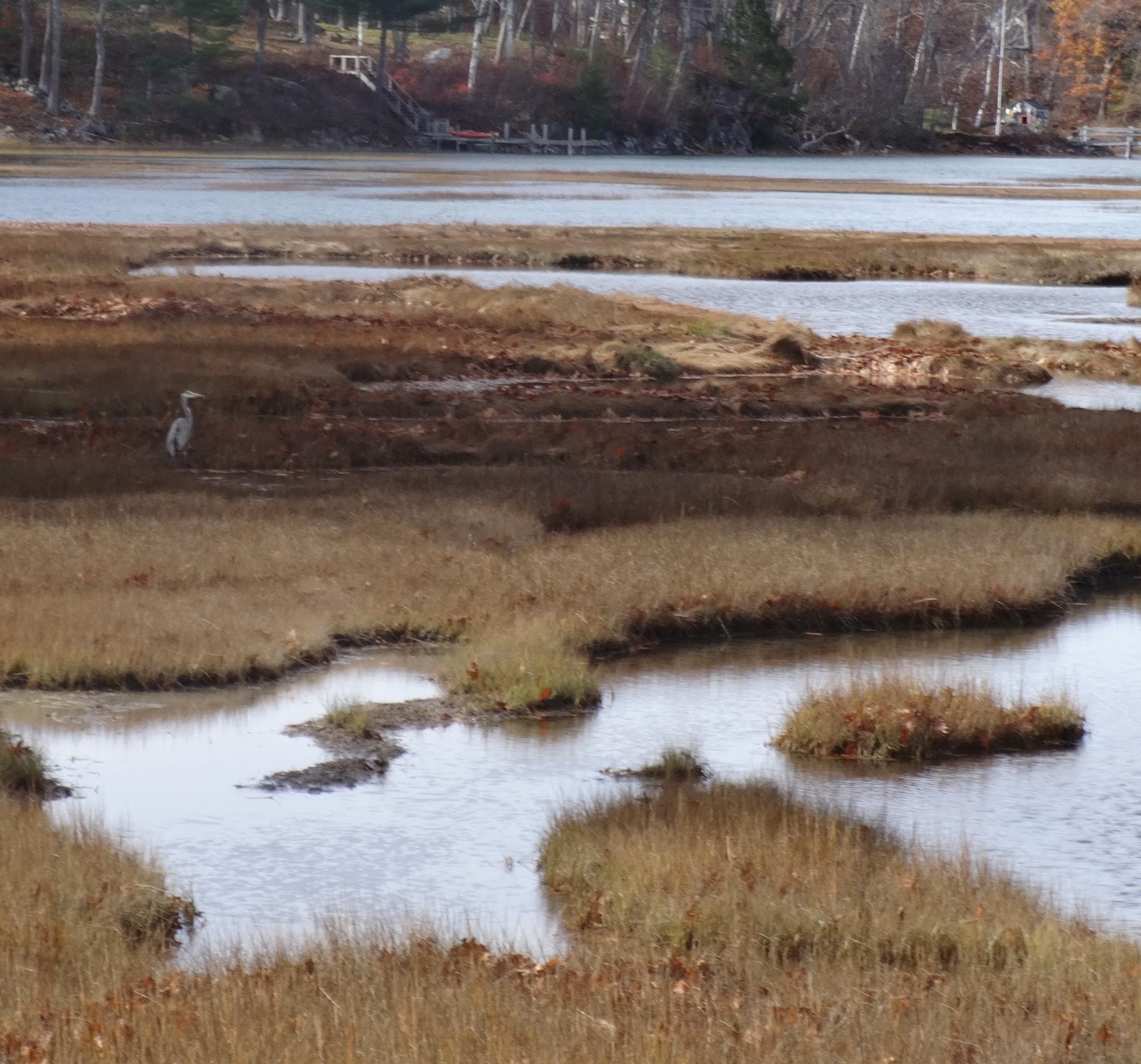 
Our next major stop was New Castle, where I have raced many times, and ridden once. It is a great island, a perfect place for a snack and some viewing of the ocean.  The whole ride south was stunningly beautiful. I didn't take a lot of pictures as I could have stopped all the time.  It was cold but very bearable. 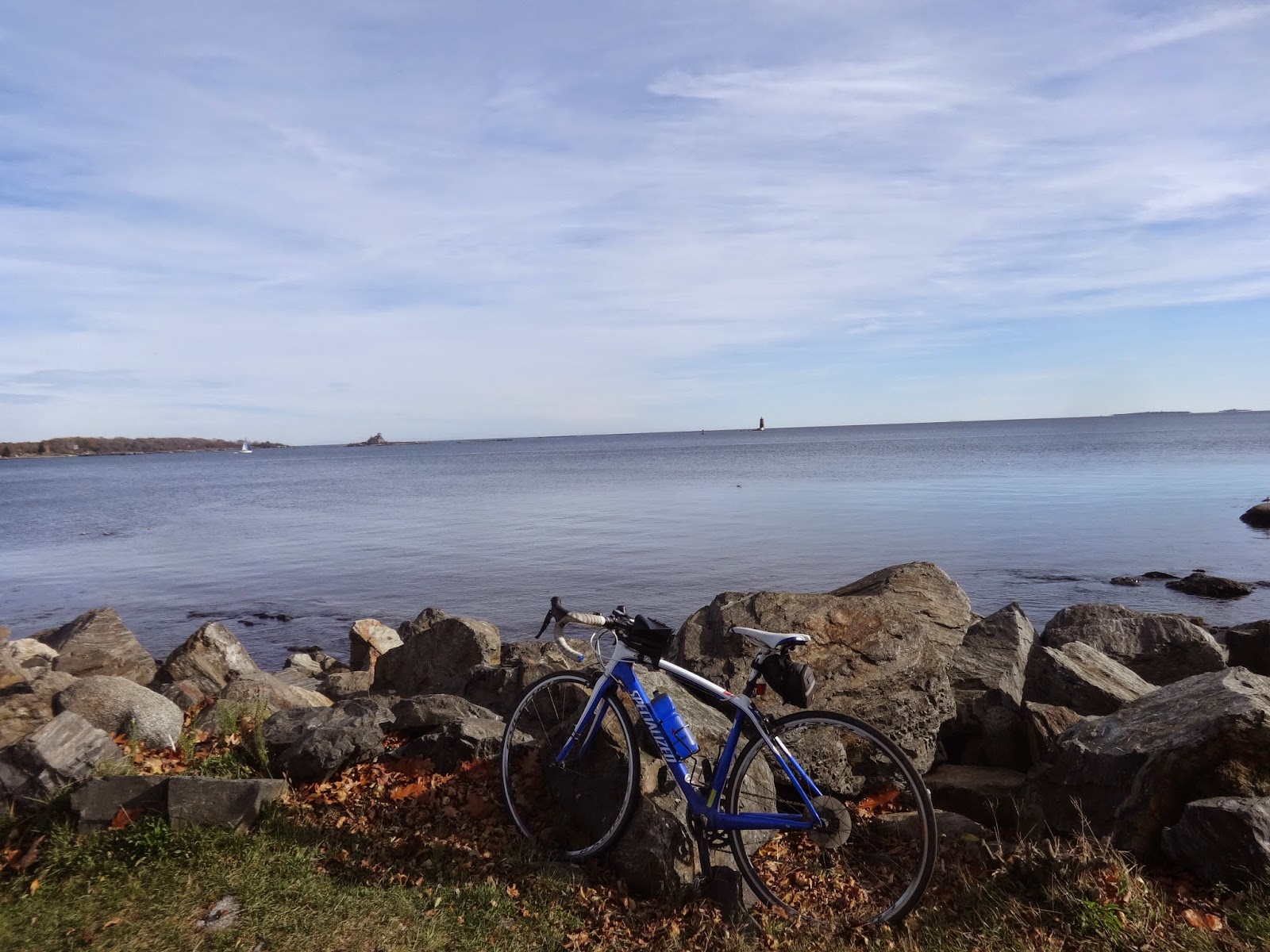 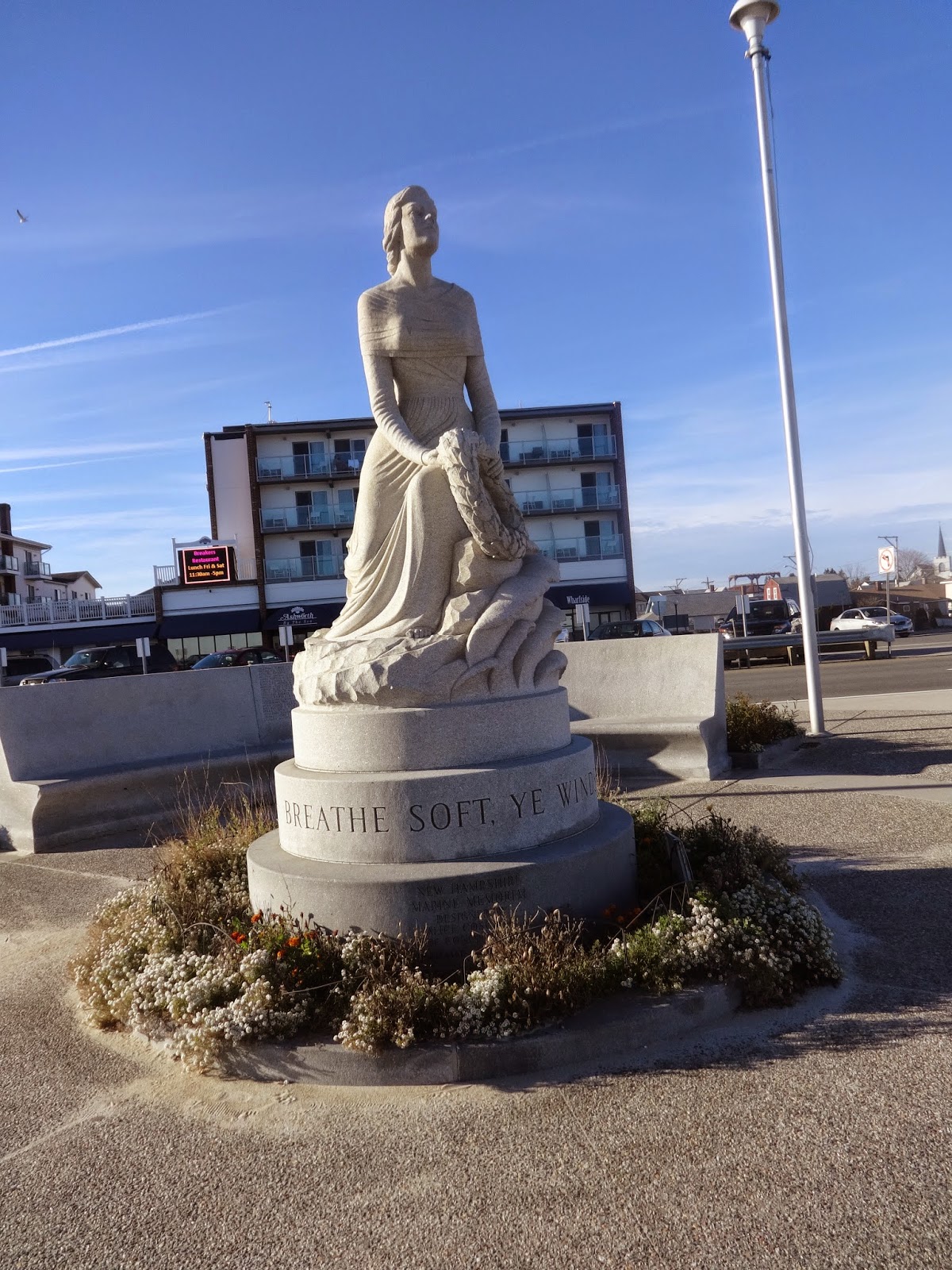 At some point I realized time was going to be tight but our goal was Hampton Beach and I wanted to get there.  We actually had grander ideas of going farther south for a lobster roll but there was no way. When we reached the turn around we had gone 40 miles.  The most I have been going in quite some time is just over 20.  I knew I'd be tired but we were going farther than I had planned.  But the biggest problem was the time and the DARK!  Cathy said we would have to be back by 4:30. It was 2:30 and I cannot ride that fast.  We were going to take a more direct route BUT.  I wasn't sure how far it was but I knew it was quite a ways. It turned out to be 32.  After a snack and use of a public bathroom off we went. We averaged a good speed for the first section along the ocean. The wind was at our back and it is flat.  No time for pictures!  That killed me but was reality.  I have done lots of races here and it was great to be riding.  We reached Portsmouth which was quite busy and a bridge was out. But we found our way through back to the Memorial Bridge.  We were doing quite well when Cathy lost her chain and had a hard time getting it back on.  Route 103 is more wooded and was getting dark rapidly.  We finally reached 1A.  I told Cathy to take off (she was wearing sunglasses) and I would go on my own from here.  She's a faster rider and I thought she should take advantage of it.  It was a straight shot and I just went carefully.  Once back at the hotel we looked out the window in 15 minutes or so and it was PITCH BLACK.  Yikes.  Lesson learned. 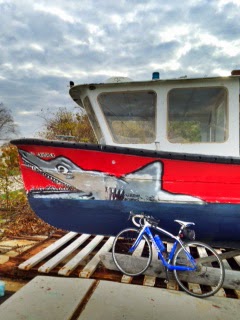 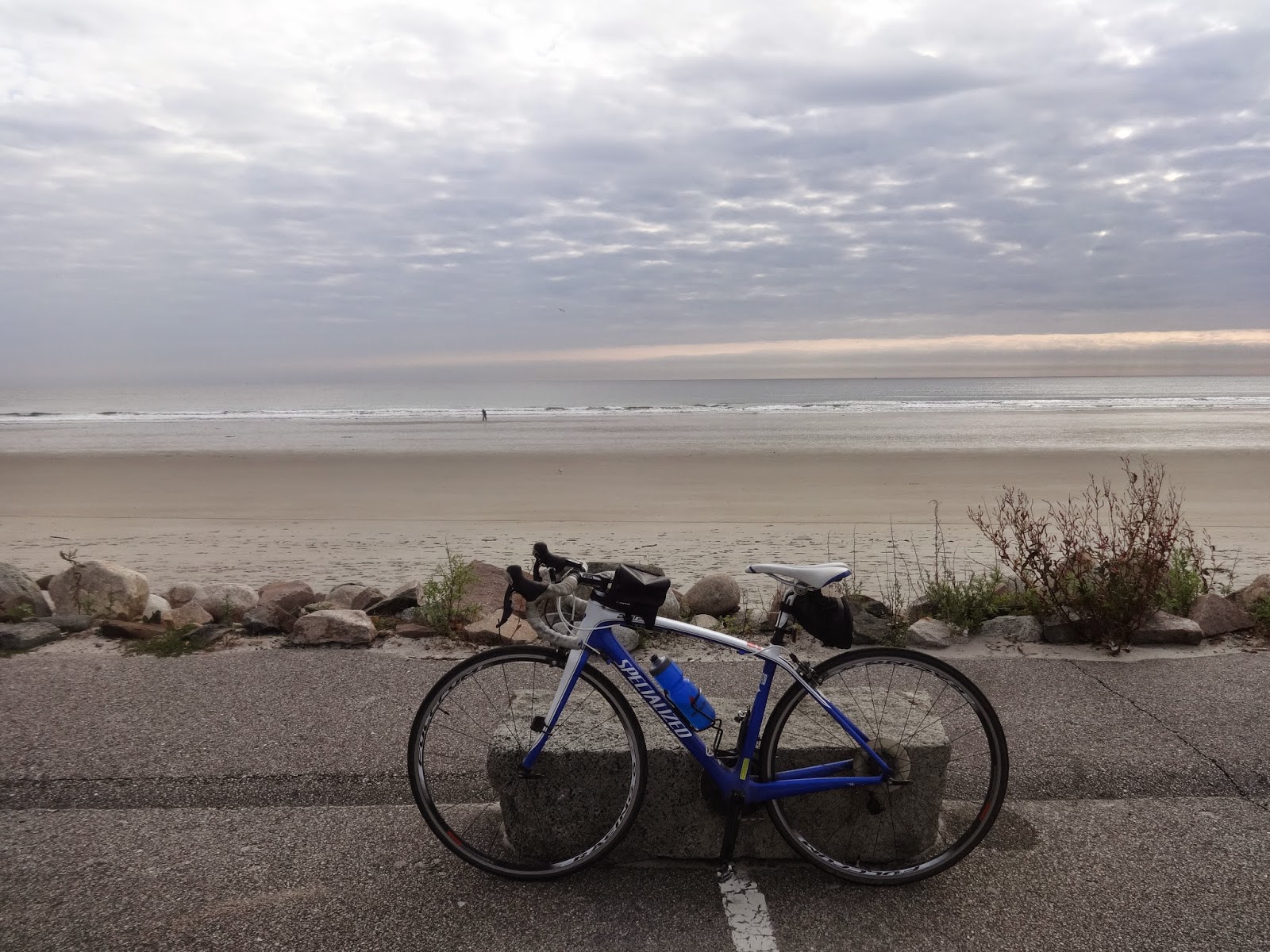 One more beach shot on Sunday.

We drove the to the Maine Diner and had a wonderful meal. Then an early bedtime again. I was exhausted.  I ran 6 and rode 72!

Another early run on Sunday and a bike ride back to Ogunquit. Hated to leave but it was cloudy which made it easier!  Love love love Maine.