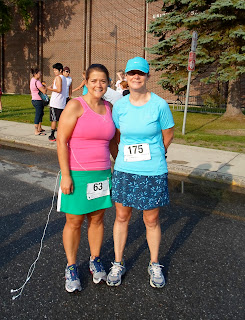 Before the race with Christa 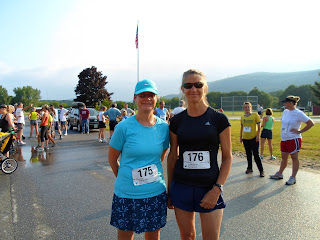 Before the race with T
What better way to celebrate Independence Day than in a hometown 5K.  When I broke my wrist just 3 short weeks ago I thought I would have to scratch this race off my list.  But the healing is moving along nice and quickly and running is no problem at all.  So this morning I headed down for the race. There were almost 200 people in the race which has grown rapidly over the years it has been running.  This was the second year that it was in memory of one of the race's co founders. Pam, a wife and mother, was a big runner. She was a coach of a very competitive local high school track team.  A race in her memory is very appropriate.  Her husband is the race director and all 3 of her children ran in the race.  Her parents, siblings, nieces and nephews take part.  This race also has more kids running it proportionally than any race I have been in. It has a very nice feel to it.  The youngest son is in my class and is a very sweet kid.  He's as athletic as they come and has taught me more about lacrosse this year than I ever knew.

Today's race was hot but bearable.  It isn't too terribly hilly and is rather informal. There are no mile markers although there is someone at every turn to make sure you go the right way.  Only the winners win prizes - male, female and junior.  Then there are good random prizes but I don't ever seem to win any of those. 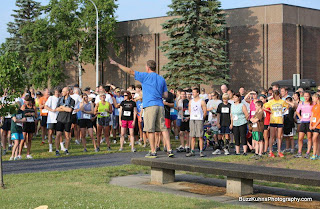 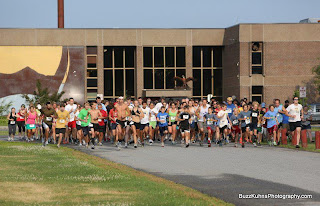 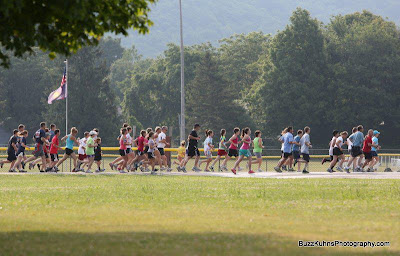 I was not pleased with my time. Every time I looked at my pace I groaned but I didn't seem to have the oomph today to pick it up.  It was more than a minute slower than last year and one of my slowest 5ks ever if not the slowest.  I had no miles in the 8s and each one was slower than the one before it.  They were all in the 9s but overall my pace was closer to a half marathon than a 5K. But I was racing much sooner than I thought I would be and  I did enjoy the race, the vibe, the day.  This is a race I hurry home from to shower and make it back to town in time for the parade and then festivities on the park.  Fourth of July is a very big deal and if you want to see people you haven't seen in awhile - this is the day to do it!

I'll bet that you were the only runner with a cast. Well done on the race and Happy 4th of July (belated)

What a fun way to start indepence day. Hope the rest of your days was as much fun as the race.

I'm impressed you raced with a broken wrist! No matter your time, at least you were racing!

Don't fret over your time. I think it's awesome you are racing at all right now!!

Oh, I just love hometown 5ks!! We drove to another town to find a 10k yesterday and it was well worth it! Lots of red, white, and blue and smiles all around. Loved this post, it sounds like you had the perfect day!

There's a 5K in Hannibal the same weekend we're in town for the mud volleyball tournament. I ran it the first year I was running and then skipped it last year because I was sick. I think I'll be skipping it this year, too, since it doesn't make much sense to PAY to do a 5K when I've barely run. Sigh...

Running a race is such a great way to start a fun-filled day!

Sounds like a fun time. If you weren't happy with your time, just blame the wrist. Just say "I xpected to do better but it's tough racing with broken bones" . Instant respect :-)

Eh, these sort of runs should be more about enjoyment than a time, right?? Right! You haven't got to run a lot with your wrist so we'll just blame it on that. Sounds like a fun race with friends...that's what these things should be about sometimes. Nice job, lady!!

Wow, running a race with a broken wrist--that's hard core (and good for you!). Don't worry about your time. You were out there, you raced, and you had fun. That makes you a winner in my book.

fun. love a race that has more kids than adults. glad to hear/read the wrist is coming along. good news!!