Workouts this week = A Mixed Bag

Monday's run was awesome and I already filled you in on that! Success

Tuesday's morning swim made me wonder if I would ever get the whole swimming thing. Nothing seemed to click. Fail
Tuesday night I went to my swim lesson where I continued to feel rather less than a stellar swimmer.  But I didn't have to feel that way as long as usual because the lesson was cut short when the pool was closed for awhile. Why?  A kid vomited in the pool.  Ewwww.  For sure. Fail
Wednesday I had a speed workout - last big one before my half next weekend. I did it on the treadmill as usual and it went quite well. Success
Thursday morning - back in the pool.  I spent a good deal of it feeling again like a less than stellar swimmer.  I was concentrating on:
I found that I was exhausted after one lap.  I guess it will get easier but it hasn't yet. I guess I feel like it is one step forward, two steps back some of the time. Fail
(although I have been watching how to learn to swim free style videos which a month ago made no sense to me whatsoever and now I totally know what they are talking about)
Thursday evening - this was when I had a bike ride scheduled.  I got my bike rack on and I was going to ride while my winter tires got changed.  Wed. after school it was freezing and raining and I couldn't imagine riding my bike the next day so I didn't get anything ready when I came home.  Thursday it was snowing - a fair amount on my car - and windy and freezing so I still didn't feel like riding my bike. And I didn't.  Instead I caught up on my WWF games as I waited for my snow tires to be removed.  It wasn't very aerobic but it was fun. Fail 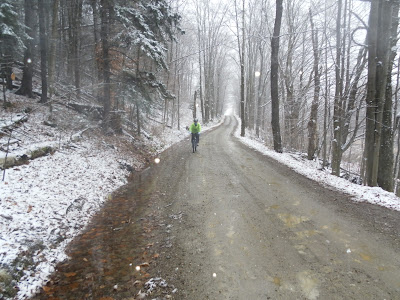 Where has the woman gone who was willing to ride her bike in this?
Posted by ajh at 6:36 AM

At least your run workouts went well! I always hated when there was an 'incident' in the pool that I, as a lifeguard, had to help clean up... The only nice part was if we had to close the pool for 24 hours and we'd get the day off.

Chalk up the fails to being tired from CB, I say! And you still did plenty. Next week will surely be better.

Every trip to the pool is a success. The result may not be what you want, just keep going.

With swimming, I think it is easier to work on one thing at a time. Pick something from your list and work just on that. Then pick something else next time. It will be less exhausting and from my experience likely more successful.

I know you wil master the swimming - total confidence in you. I know what you mean - yesterday it was windy so I bagged my bike ride...whimpy, for sure. I used to run when it was below zero.

You know I am not a swimmer. Yet, like anything if you keep splashing away at it .... .

I'm sure you had a nice bike ride ... although those weather conditions. Beautiful picture!

Oh gosh. Pool incidents are the worst. Our pool had way more than our share last summer. Yuck. Yay for speed work success!

Barf in the pool? Snow in April? Yuck!
Hang in there, summer is coming soon!

You're so hard on yourself. Sure, you're probably never going to be an Olympic swimmer but the fact that you're in there giving it a go and learning something new counts for a lot in my book.

you say fail, but i say success because you showed up...uh especially with puke in teh pool

Isn't training just like life, a roller coaster?
I would love to bike with you in the snow.
As for swimming, sorry about the barf thing. I don't think you will have to deal with anything like that in your tri.

You'll get there in the swimming. I think it's a lot like it might be to learn how to fly. (you are kind of flying in the water, else your feet sink)

Anyway, can't expect to fly (or ballroom dance like a pro, or play an instrument) without many hours of practice!

The fact that you know what the videos are talking about now shows you are becoming aware of your faults..which is the first step. Keep at it!

I hate it when you're ready to go but conditions make other plans for you. Pool barf?? Bummer! We had snow on Monday, almost 80 today. Crazy spring time!

Don't give up and keep on swimming. Very soon you will be able to race in open water.
Great news!!!! Next week I will buy my wet-suit, I have found the shop in Rome.