This was a cold but good running weekend in Vermont.

I did my long run on Saturday because of Easter and other conflicts on Sunday.  T and I went for 12, my last long one before my half next weekend.  It was hard to know how to dress but I think we hit it right.  The miles were pretty painless. At that point the sky was blue and there was not much wind.  I had plans of going for a bike ride later but that didn't happen.  As we were nearing the end of the run instead of feeling dead and ready to be done like I usually do I started picking up speed.  My last mile was 10:02, a good deal faster than the previous miles. I felt great and it gave me some confidence for my half next weekend. 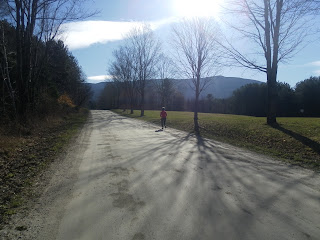 A gorgeous day to be running back in Vermont
Sunday was a 3 mile pace run.  I am loving these pace runs and need to keep them up when I am not seeing them on a training schedule.  I felt especially good about this one doing it the day after a long run and liking the results.  My miles were 9:18, 9:47 and 10:02.  Some day I am going to get that third mile in this series under 10!  The first 3 are basically uphill - some quite slight but it is a good place to do  a pace run.
Yesterday I spent several hours making a purchase which I will share later this week!  Jameson helped me out.  Today he came for Easter dinner so of course I have some pics of Jax. Some of them Jameson shared with me from a fun time at the beach near his house early on Saturday.  Some are when Jax was visiting our house and the cats. He loves it outside because he can be off the leash and run around like crazy but I am not so sure he likes it inside our house.  He just wants to play and those darn cats just don't get it. 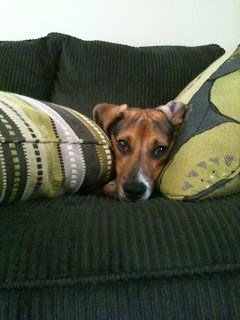 Just a cute picture.......I mean really! I asked Jameson
if he staged this picture and he said no! 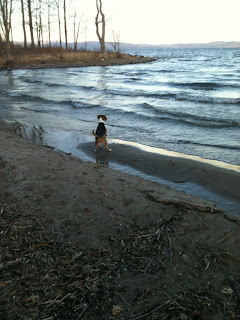 Playing at the beach. 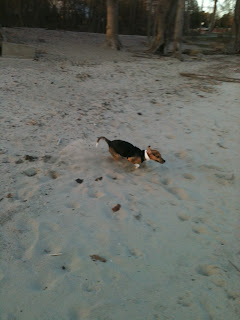 Got to love those ears! 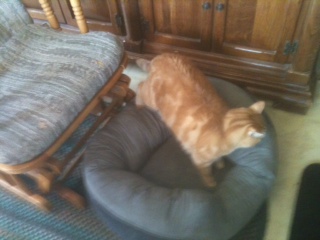 Easter - Jaxon has gone outside and Rocco tentatively tries
out his bed. 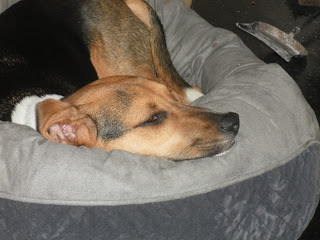 He looks like he's about to nod off but he could never do
it. I think he was too afraid he would miss something.
Posted by ajh at 6:29 AM

Ooh, ooh, I have a guess on what the purchase is!! If I'm right I'm really excited for you. :)

Your runs are going GREAT. You are going to do SO well at your half!

Haha your doggie is just precious!
Nice job on the long run- looks like you have this half in the bag for sure.
Where are you running next weekend? (and GOOD luck!)

Jax is so cute! And what? The kitties don't get him?

Nice training. Sounds like the precursor to a good half!

If you are so faster at the end of the workouts it means that you will run a good half.
Those pets are lovely.
Next week a cat of mine, who lives in the garden, will leave for Leghorn to a friend of mine's house. I am sad but it is better for him to live in a flat instead into the garden. At home I have already 3 lady cats.

Good question about the wet suit.
Perhaps both .... because i want to swim into the sea from april to late october.
Do you have any tips?

I am betting Rocco was lookng for some of Jax's leftover warmth!

I think I know what that purchase was...
I love photos of Jax! I should post some more of Delilah.

And I can't get enough of Jax, too cute.

Jax is so cute!

Your training is going so well!
Jax makes me what to get a dog again so badly but it just isn't in the cards..

Great running. I'm looking forward to you doing the half, and reading about it!

Thanks for the cute animal fix! Seems like you have an imminent half every time I stop by. Go you!

Sounds like it'll be GREAT half! :) Such beautiful running country, too.

Glad to hear about your fantastic runs over the weekend. And Jax continues to be his normal adorable, cutie self. The beach looks nice especially for we water-starved Coloradoans! :-) Did Rocco stay in the bed? Jax couldn't nod off b/c he was waiting for an attack from his kitty uncle/aunts. We'll be waiting for your purchase announcement!

It's so good to hear that you're running so well just in time for your half. There's nothing quite like a shot of confidence. I'm wondering if all that swimming is having a positive effect in terms of fitness.

Good luck in your half, sounds as if your training is going strong.
P.S. Great pics, but where's the snow? We're still stumbling through ankle-deep slush up here, sigh, sigh.

He is adorable and yes, the beagle ears are pretty much the best.