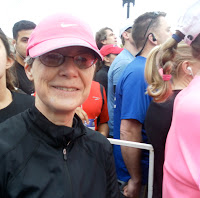 A photo I got a random stranger to take.
It doesn't show my very cute skirt.
Today I ran the the Cherry Blossom Ten Miler minus the cherry blossoms as well as minus the heat that caused them to peak so early.  It was actually a great temperature once you were running but before was cool and after was freezing cold OMG freezing cold. All that sweat produced over the running of the ten miles was not fun once you stopped. I found my way to the bathrooms at the Washington Monument and changed my clothes that thank God I had brought.  I was still freezing though for a few hours until there was quite a temperature shift.  I did NOT use the toilet in the bathroom as it was beyond gross. I then attempted to use a port a let but way beyond gross. So I held it!  But what has this got to do with the race?  On to the race report....

There were many many people making their way to the start early early this morning. There were no taxis around and it looked like we might be walking the whole way when one stopped.  So once there we had time to use the port a let and check out bags but no pre race picture with Emily :(  as Emily's wave was an early one and off she went all excited to meet her goal and a bit nervous to get it checked in.  You'll have to stalk her blog to hear about how she did. I got back in the port a let line but finally decided I really didn't have time so went to the start.  Let me back up a bit.  In this huge city far from home with 17,000 racers plus spectators milling around I saw two people I knew.  The first one was a friend of Emily's who recognized me from when they did the Wineglass Marathon two years ago.  Then as I was getting into line to start I saw this girl who I think must be my personal ambassador to welcome me to DC.  I don't really know her and have had two brief "sightings".  Last time I was in DC we saw each other as we were  crossing the street (is that okay lingo for big city roads?) running in opposite directions near the Washington Monument.  A quick " Are you........ and a hi" and we continued on our runs.  This morning there she was again with a big smile and a quick hi amongst the huge crowd.  Always fun to see a familiar face!

So I got into line still fairly clueless as to how this whole wave thing worked as there were various colors all around me.  I wasn't sure when we started until someone near me clued me in.  And then the crowding began.  The first mile felt really slow as you just couldn't move. There was no point to pass people yet as there were just too many and it felt like I should just let it shake out.  I remember thinking after mile 3 it was finally better although by no means did it ever go away! 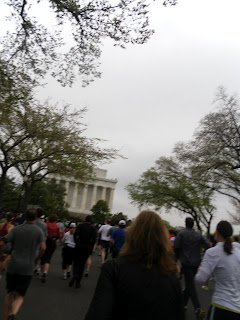 One of many times seeing the L incoln Memorial. 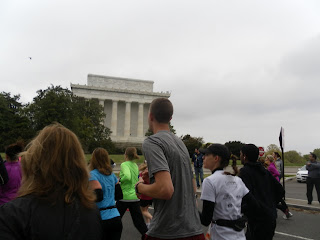 Before I knew it we were crossing the bridge running past the Lincoln Memorial on our way to Virginia. The Lincoln Memorial was very present in the beginning of the race.  I was still in what felt like a jogging pace but thought I'd like to pick it up.  I knew I hadn't tapered but I didn't want to not try at all.  I didn't see my first mile split but figured it was in the tens. Once I started paying attention they were in the 9s and I worked hard to keep them that way.  The pacers drove me nuts though.  I kept seeing 10:00 pacers and did not want to be behind them.  So I would get past them only to see more. Did they start at different times?  That was the other thing about the waves. It was hard to find people to judge your time by.  Often I find someone and try to stick with them but that didn't seem to be working. 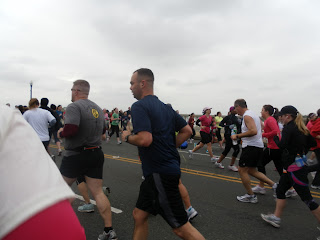 On our way back across the bridge- I like races where you meet other runners. 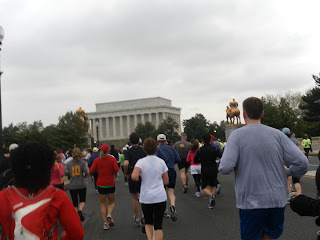 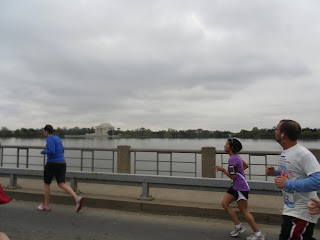 Pictures aren't great but I was running!

As I said we went by the Lincoln Memorial several times and that rocked.  I loved the crowd enthusiasm as went under the bridges - being as noisy and echoey as possible.  The miles weren't speeding by in fact at Five Miles I was feeling quite tired and didn't know if I had a second five miles in me at the same speed.  (foreshadowing)  But I wasn't ready to quit.  I didn't think I'd PR this race but I wanted to be respectable.  Who doesn't?  Then we were going by the Jefferson Memorial - I can't say how much I love the sight of this memorial and sight of Thomas Jefferson from so many angles.  This definitely helped put me back in a happy place. Next on to Haines Point. I remember thinking - "good now I'll know how to get to Haines Point."  Well, maybe not.  It got VERY crowded again and then I realized I was in the middle of the 10:00 pace group.  NOPE!  This needs to change so I picked it up and tried to stay ahead of them.  That was one of my most motivating things in this race - staying ahead of those pacers. 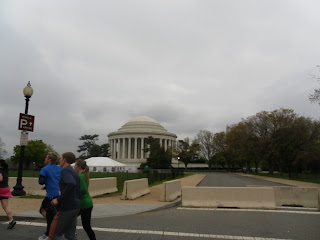 TJ was cheering me on. 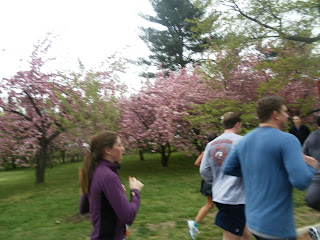 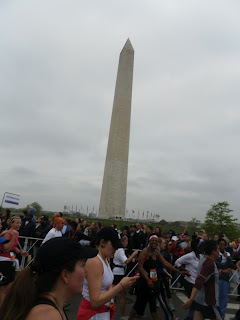 I remember thinking Emily must be long done - yep - but I needed to keep "pouring it on."  When I got to mile 7 I thought about my last 3 miles at home.  The next to last mile is my favorite one and I tried to bring those positive feelings to this race.  I didn't die.  I kept up the pace I was running.  I could see that I was absolutely going to be under 10 minutes a mile, no problem.  Who doesn't love 10 mile races?  Great distance!  Then came a pesky hill near the end and surprise there was my girl cheering for me near the end.  It wasn't easy to find racers in this crowd!  I finished, went and got my medal and a little food and then all I could think about was changing my clothes!

So here are my stats from my Garmin. I haven't been able to find race results yet.  The official pace for me will be a bit slower.

I know that every time I looked at my Garmin it seemed to be between 9:30 and 9:45 and that definitely made me happy!  I was sweating like  a pig even on this cold day so I knew I was working hard.

One of my favorite moments - on Haines Point an older man was running beside me and said:
"You can tell you're a serious runner."
"Oh, yeah?"
"Yes, your legs are in seriously good shape."

I choose to think he wasn't hitting on me (he was quite old even in my world) and that it was the compliment it sounds like.

WOOT WOOT!! for the stranger's comment on your legs!!! Love it!

Yay for the compliments from random strange man! lol

He might have been old but he could still see. That's a great compliment - flattering about your legs but even more flattering that he could see at a glance that you are an athlete.

Great job! Too bad the adirondack 10 miler is the same day as your tri, I think.

Congrats A on a very nicely run race! Makes me look forward to MCM later this year. He's checking out your legs....
I've got a tech guy working on my RSS feed etc. on the blog. Until then if you like the FB page, my blog posts feed thru there. Sorry for the PIA.

Great race! Really good time specially with how crowded it was. Top 1/3 in your age group is awesome!

I had to smile at the fact you haven't run in waves or corrals before...many of the races here in CO are in waves because it's just so big. I do like the smaller races without the waves though :).

Congratulations on such a fantastic race. You did great ... so happy for you! What a perfect start to a great vacation with Emily :).

Have a fantastic rest of the trip. I bet you'll be entering more races in DC with those flattering comments :)

Great compliment and even better race! Good job! enjoy the rest of your visit with Emily!

Awesome!! I can only imagine finishing a mile with that kind of time. Great job! And super nice job having someone pick you up along the route :)

Great race and report! Congratulations! That is a good time in a crowded race like that. You can be very proud. I'm sure that was a genuine compliment.

A very nice comment on your legs. Congrats for the results: in the first half overall and in the first third a.g.
Also the finishing time is very good considering the crow and the time spent to take pictures.

Nice! You did awesome- great job getting all those twrrific pic mid running stride too. I can never manage that...
I LOVE that a random dude gave you such a nice (and accurate, I'm sure) compliment! Good for you hot stuff... :-)

You rocked that one! That is a great race and you must have been packed in like sardines :-o Compliments are ALWAYS good, especially after working so hard!!! Have a great week!

Congrats on your race!!! I'm surprised I didn't see you during it! we were at mile 5 and the finish. Liz said she saw you so I should have seen you!

Congratulations, you had a great race!!!

Awesome awesome job! And leg compliments are so worth it all.

Congrats! That is a great time, especially on a crowded course!
I still have never raced a 10 miler! I need to get on that.

Congrats on a great race! You did fabulous! Thanks for sharing your experience. I want to do this race someday.

That's a great race for "not racing" it. I love that TJ was cheering you on..what a guy! And random compliments from strange men...pure awesomeness!!

fun! fun! great race report! Compliments from men that are not trying to hit on you are the best - you know they really mean it!

It's nice to know us normal people also do this race. I recently heard of this race from a 62 year old I know(edie stevenson) - I had to look up her results. 1:11:22...inspiring and discouraging all at the same time.

it was great to stumble into you sunday morning, and congrats on a really well-executed race!

You should be VERY happy! Congrats on a great result and hanging in there for the finish! You're in the first third of your age group too!

unless he had a sketchy 'tone' to his voice, i'd definitely take that as a compliment. good job staying ahead of those 10:00 pacers! though, i'm wondering when they started if your pace was well under 10:00... hmm. this race always sounds like a good one, hopefully one day i will be able to run it!