I had no plans to ride my bike in Maine today. The forecast sounded horrendous so I figured my swim in the morning before I left Vermont would be it for the day. 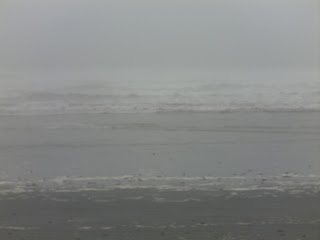 I could hear the ocean from my hotel room - it was
very loud as the waves are high and I could smell
it but I could not see it because of the fog!  I
needed to explore.
But when I got here it was foggy but not too cold compared to what it has been and simply misty so I decided to explore on my bike.  As soon as I stepped outside it was raining so I headed back to switch to my raincoat. Very Good Decision!

First I headed up to "my" lighthouse but it was so foggy you couldn't even see the lighthouse! 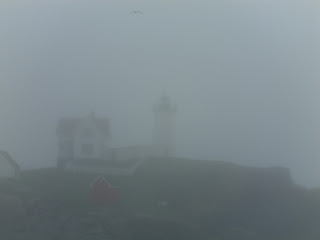 You could hear the foghorn but not see the red
flashing light. 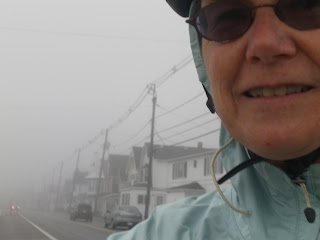 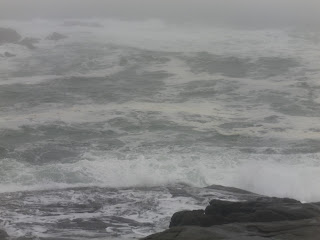 Also at the lighthouse.
I continued along loving the smell and sound of the ocean.  I had no plans of a distance to go. I was simply enjoying the ocean while also looking for a place to eat supper!  I kept going over this bridge and continued north toward Ogunquit with no intention of going very far. 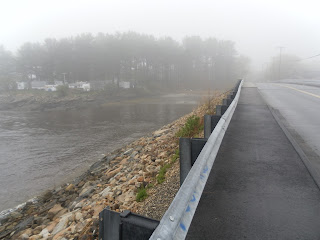 I ended up riding and riding. It was hilly but they were fun hills that were easy to get up and down.
I came upon some nice ocean views - or they would have been on a different day. 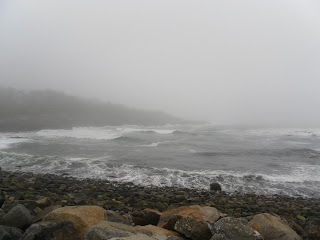 At some point I realized that I might as well set Ogunquit as my goal. I got there and rode until I got to route 1 before I turned around.  On the way back I tooled around Perkins Cove where I saw the sign below, not one one you see just anywhere. 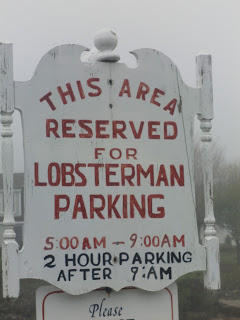 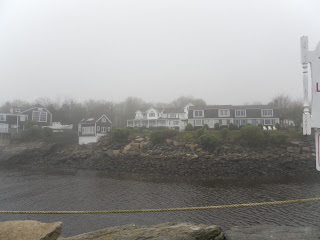 Most of the way back it rained pretty heavily. I still wasn't cold but my shoes got soaked and I no longer made any big effort to avoid puddles.  The whole time I was trying to be very aware of cars as the fog was still heavy.  Once I got back to York I headed back to my lighthouse before heading to the hotel. As I passed Short Sands I could see several people in the water. They were all surfers wearing wet suits of course but from a distance it looked a bit like seals.  Short Sands always has good  waves but on a stormy day they are obviously bigger and must be a big draw. I didn't watch too long as I was starting to get cold. 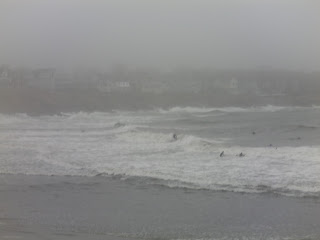 When I got back to the lighthouse I was amazed at how much better you could see it. When did the fog lessen?  Although once I got down off this higher point of land it seemed just as socked in as ever. 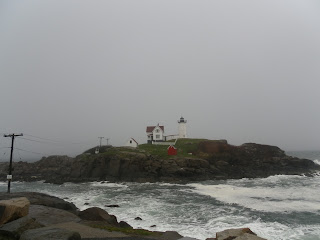 I ended up riding 23 miles having a blast the whole time! I'm glad the weather was rainy and foggy as it just added to the whole adventure.  Tomorrow I hope to do a longer ride and I will take it a little drier please.  I have stuff draped all over my hotel room drying out.  It seems like I brought half my house but a second pair of shoes for biking?  Nope.  Even though I certainly could have.  My other pair of bike shorts?  Nope. Although that could be because I can't find them.  My bike is in my room too and I did the best I could cleaning it up.  It also makes a nice rack for putting my rain pants on to dry.
After I warmed up I went down the road for a delicious bowl of clam chowder and a lobster roll. When in Maine............. 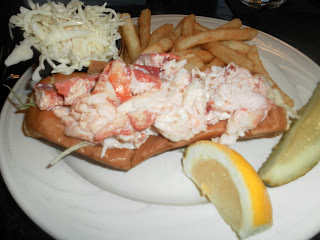 I love this vacation for one! It's something I've always wanted to do.

Glad you got out there on your bike. I was also glad to see you weren't wearing all black and riding in that weather.

Enjoy Maine, I have great memories of Maine...I got engaged there and we went on a lovely family vacation there with Justin's family.

The fog is so Heathcliffe/Wuthering Heights/ mystical/ romantic. I love it too. Your photos are gorgeous. It's a beautiful part of the world.

You're hardcore Andrea for going out on that bike ride. But when I ride this I remember our last wet vacation where we went out every day too, rain or dry. While if we had been at home we wouldn't have gone anywhere. Guess vacation makes a person easier and one doesn't really care about the weather than.

Enjoy the rest of your stay.

That hot chowder must have tasted awesome after your foggy, rainy bike ride!

Have a great time (I know you will)!

Beautiful and awesome that you can do some training there. I am very jealous.

I am glad you are having a good time. I hope Travis and I get to maine this year!!

Love that part of Maine- haven't been there in years. The ocean is fantastic - lucky you!

What a great lookin' ride!

It's easy to see that you are enjoying Maine coast although those weather conditions! Beautiful pics!

Now I wanna go back to Maine! I love it! What a cool Bike adventure. The fog makes it cooler, as long as you didn't fall. Yay for orange shoes. : )