Unplugged Half Marathon Report - The Race that almost Wasn't

I started out for my race on Saturday morning running a bit late. I was about 10 minutes down the road when I realized I had left the bib at home. I had picked it up Tuesday night - when I got my new bike - and it was overshadowed a bit by that purchase.  So I high tailed it back home not at all sure I would make it in time. There was a bus to take you to the start of this point to point race.  I called my son who saved me 3 times:


I knew it was going to be close.  As I got closer I pulled the stuff out of my bag I would want to take with me to the bus.  I didn't bother with anything I didn't need. Throw away shirt - I could be cold, oh well.  Ipod - no time to fool with it.  I grabbed my car key, camera and sunscreen. All of these fit in my hat or skirt pocket.  I made the bus as they were calling last call and closing the door.  Another minute and it would have been gone! 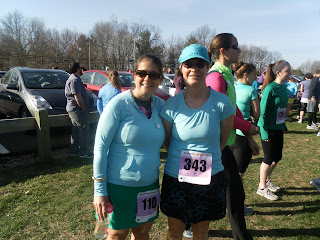 I did find Christa and her friend Becky at the start.  I really didn't recognize many people but there was a good crowd. The race had two waves - two hours  apart!
The weather was perfect and I dressed just right for it.  It was a gorgeous day which made racing by our beautiful lake so much more pleasant!  The route was not the same as last year as it had been changed last year because of all the snow.  The start was in a different place and we didn't double back on the road but took a path alongside the road on the way back. We did all this winding around through the neighborhoods.  It felt like a lot more winding than last year but I could be just not remembering it. 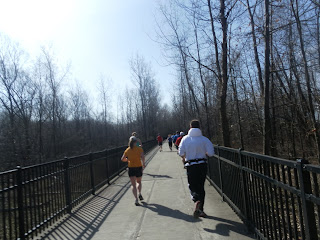 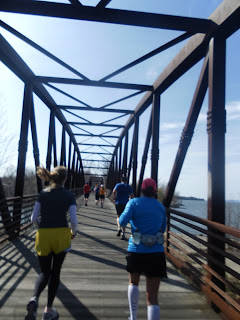 There was a woman beside me who was very annoying in that she was making the loudest noises as she ran.  And we seemed to be running the exact same pace. I couldn't get ahead of her and she stayed right with me.  When we crossed the suspension bridge it moved a lot because of all the runners on it. She exclaimed, "Oh, shit! Oh, shit!" over and over again all the way across it.  She had gotten a little ahead of me at a water stop and when I came up beside her she was thrilled to see her "pacer" again. She was so pleasant I decided I needed to get over her noises and be pleasant back. But then I got ahead of her and that was it. I never saw her again.  Later there was another lady in the ugliest dress wearing a fleece headband that just looked wrong together. We were together forever and then after a water stop I never saw her again.  I was a bit worried she got hurt or something.  Then there was one more lady that I thought I should turn into my running partner because we ran so perfectly together. Then she got ahead of me and I thought that would be that but later I passed her and never saw her again.  I guess I have some endurance from all those miles I put in!
I felt great the first ten miles. At the ten mile mark I was about 3 minutes ahead of where I had ended my ten mile race two weeks earlier.  But once again those last 3 miles killed me.  I need to get over that and keep it up for them!
But overall I loved this race and felt great about my outcome.  Out of my last 5 half marathons it is my fastest time. The last fast one - this race last year!
Here are my goals I made before the race:
I always like to put my mile splits as much for me to refer back to as anything.
Mile 1: 9:01
Mile 2: 9:09 (I didn't catch my time on either of these miles)
Mile 3: 9:27
Mile 4: 9:27
Mile 5: 9:35
Mile 6: 9:46
Mile 7: 9:27
Mile 8: 9:37
Mile 9: 9:25
Mile 10: 9:46
Mile 11: 10:17
Mile 12: 10:13
Mile 13: 9:52
.15 8:58
So my 20th half marathon is in the books. I'll do a post later about my bike rides this weekend and my sweet sweet sweet new bike!
Here are my workout stats for the week. I finally feel they look like a triathlete in training because I have added in the bike.
Swim: 3900 yards
Bike: 45.5
Run: 19.6 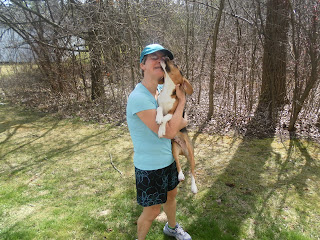 love love your new header - Congrats on a great race!

Well done on such a great 20th Half. You met so many of your goals. Pity about the brownies though.

Hey! Aren't you that great new swimmer I've been reading about on the internet?

Good job on your 20th! No brownies is probably for the best 8/

I can't believe you don't ride with toe clips..(yes cleats take more getting used to I think) . I feel like I'm going to fly off the bike on large bumps if I'm not held in somehow though.

Wow, congrats on 20 half marathons and a great race!! And those are some pretty awesome stats!! You are definitely a triathlete!

Wow, congrats on 20 half marathons and a great race!! And those are some pretty awesome stats!! You are definitely a triathlete!

Awesome race! Really cool you were recognized too!

Yay for a fast day!!! We hope you are feeling good about your time despite the last few miles not meeting your expectations. Well done! And then to come home for a spin on your sweet new steed - extra well done! Laughed about the lady and her funny noises - a local friend had a lady who ran frequently next to her treadmill, at a nearby gym over the winter, who growled. Yes, growled. That would be distracting, too! :-)
You capped off a great day with a hug from Jax - icing on the cake!

20 halves is amazing! Congratulations on such an incredible milestone, I am very impressed.

Funny about the noisy woman. I have my iPod on all the time so never hear those things, but I know I was annoying the crap out of the guy I was trying to hover around today to block the horrific winds. He kept looking over his shoulder at me. Hahah. Whatever.

Funny about forgetting your bib. I always have anxiety going to bed at night before a big race because I am so worried I'm going to forget something. I must check the alarm about 10 times, too. But you made it and that's all that matters, right? Well done, lady! Very happy for you!

A fleece headband? She was proably attacked by an animal!

Great race by the way!

That's the best reward one can get Andrea.

Congratulations on a fantastic race!
You were awesome.

Congratulations! Well done for achieving so many goals! That is really awesome! I'm not a fan of noisy runners either but I suppose they are usually pleasant.

Great running - your 13th mile was really fast, and you only had a couple of miles a little over 10 mins.

I love your comments about other runners! It's funny how you can run with someone for ages, then suddenly lose them.

Sounds like you met a lot of your goals!! Glad you didn't miss the race. 20 half marathon is a huge accomplishment! And Jax at the end is nice too.

Congrats on a successful 20th marathon!

NICE!!! Happy 20th half!!
I get funny about the runners around me on some days - not always but there are those times where certain runners just make me crazy!
Love the pic of puppy love!!

Your 20th half! I'm still amazed by that number. Hurray for Jameson repeatedly saving the day!

I tend to be pretty oblivious about the runners around me unless I'm talking their ear off...and I usually can't hear their weird noises over my heavy breathing. :)

BTW, did you tell your husband he's now (in)famous on facebook? :)

Congrats on a very strong 20th half A! I ran next to a 'telltale heart' lady similar to the one you speak of once. Very annoying indeed.

Congratulations on your 20th! It looks like you had a great race. I'm glad you made it to the bus on time!

I wish *I* could be there cheering for you at the tri!!

And you won't be humiliated. Seriously. You're going to do great.

That was the best reward!
Congrats for your 20th half marathon and all the goals you have met, you did a very good job.
Are you ready for the the swimming races? I am going to sign up for my first one.

wowza, congrats on your 20th!