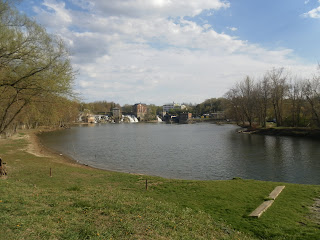 Taken at the end of my Thursday bike ride

I had forgotten how uncomfortable a bike seat can be.  Saturday I was ready to cry for mercy after 25 miles.  It was the same distance I did last Sunday but last week you may recall I had to stop and wait for my husband frequently so I had many breaks.  Saturday I was trying to keep ahead of the rain so I never stopped.  My butt was quite sore as were my shoulders when I stopped.  I don't see myself doing 40+ miles in Maine yet. I am going to relax and do what I can because my time in Maine is all about doing what I want and relaxing! 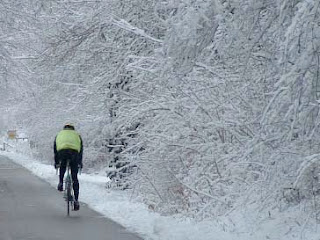 Saturday  I had run first at home - 11 miles so I didn't ride until about 11:00.  I went to Midd. as I had to get groceries and that would allow me to take the route I like so much.  It was overcast the whole time but when I started out it was a good temperature - maybe high 60s.  At one point it felt like I had just ridden into a freezer the change in temp was so abrupt. I thought it was one of those small sections you hit and then it changes back but nope.  It stayed damn cold the rest of the way.  I didn't feel too bad as I was riding although I was aware of the cold but as soon as I stopped I was FREEZING!  When I got in my car I found out the temp was now 46 degrees.

When I went to the grocery store it was colder than usual which didn't help. (I heard someone else saying it so it wasn't just me.)  As soon as I got home I started a fire in the wood stove and guess what I am next to right now?  The temps forecast for Maine are on the cool side so I will need to take the right biking clothes.

I am trying to get my speed up on the bike but so far it is pretty consistent -slow! 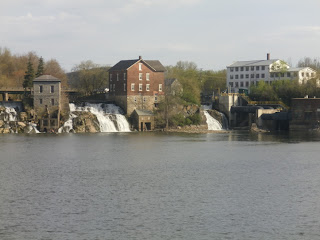 Also Thursday's bike ride
I ran for 2 hours and then biked for 2 hours so I guess training for a tri is like training for a marathon!  I had 3 doubles this week. Two days were running and biking in various order and one day was swimming and biking - though several hours apart.  My bike ride on the swimming day was excellent. It was just 13 miles but a perfect after work loop. I had gotten my hair cut in another town so I had brought along my bike and my co worker who is a biking nut (she rode 48 miles today) met me and took me on one ride she likes. It was quite flat and great.  I had done some of it last year when I went on one of my long loops.  Thursday it was very windy but the temp was great. The only bad moment was when we got back to the cars and there was a truck parked there. I was panicked over my car being towed and wondered why Cathy looked so nonchalant.  Well I had ridden right by the cars to the second pull off. She thought I was just trying to get more mileage! 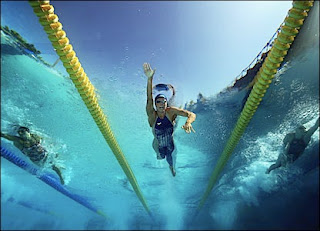 I am going to go swimming early Monday morning before I head out for Maine.  I am working on getting fewer strokes per lane.  I started out okay with this last time but as I continued I was back where I started. I always do a 600  straight free style since that is what I'll be doing in the tri.  I counted strokes for one length every 100. I'm going to try again on Monday.  I liked doing this. When I did it at my lesson sometimes when I had the same number of strokes I was still a bit faster.

Sunday I ran  just 6 miles but it was 32 degrees with a mist and it never cleared up or warmed up.  I have packed so much stuff for Maine to deal with various weather I think my husband is a bit worried about how long I will be gone. I want to get out there but I'd like it to be not too bad!!
Posted by ajh at 8:22 PM

You're just killing this training Andrea. So many sessions. So many doubles. So many hours in activity. I bet you sleep well at night.

Look at you go! :) We finally have some heat here!
ps--you asked about my dad and the finish line at Boston. He is the managing editor of a newspaper and so he gets a "media pass". EVERY marathon I've run, he has been camped on the finish line. It's pretty special!

You may already do this, but if not, one thing you might try is getting off of the bike seat while you're riding. Stand and pedal, stand and coast, whichever, but sometimes the break is a help. Of course, there's also a large dose of just needing to have that time in the seat until your butt remembers there's no point in complaining bc you aren't going to listen anyway. :)

Have a GREAT trip!!

Great job on the training! We have had the opposite weather problem here in California. We jumped into the 90's this weekend. 90's! In April! Geez, if this is any indication of summer...

You are rocking the training, girl! Way to push though those miles when your butt hurts...Oh how I remember those days last year when I trained for that century. It will get better, this you know, so keep pushing though it. And a 4-hour training day would knock me out cold for the rest of the day. You go, girl!!

Have a great time in Maine. OMG, I am just drooling over that picture. Sooooo different than what I see here.

You have been doing some awesome workouts - no wonder your butt hurt! I am keeping my fingers crossed that the weather improves for you!

Your tri training makes my envious! I can't wait for my bike pump to arrive (it's already shipped) so I can get back out there. It rained all day yesterday and is still cold and rainy this morning so I was ok not getting out yesterday. I need to get to the pool!
Love the photos from your Thursday ride. Especially the waterfall picture.
Enjoy your time in Maine! Hope it isn't too cold. I know this week won't be too warm down here.

Having just come back from a run in the rain, your post title really hit a chord with me! Cycling in the rain is no fun, even worse when it's windy too. Sounds as though you are doing some GREAT training - well done!

A 4 hour workout in 1 day? You're hardcore Andrea.

I hope the weather improves. It's not much better here, too cold for the time of year and then the sun is shining while 5 minutes later it can rain again. Desperately waiting for Spring over here.

Similar weather here - 70 on Sat & 40 on Sunday. I bought a cruiser seat for my bike & it made the difference but then again I am not racing. I hope you have better weather in Maine than predicted here. Enjoy your time off.

Your training is looking great! 46 is really cold for biking. Anything below 60 is cold for me.

Have a great trip!