You Get What You Wish For (Part 1 of TTT)

1. Was it just last week I was complaining about running?  Now those words are going to come back to haunt me as I went to the doctors today and the words I heard as I was leaving were:


Don't Run For A Month!
Well, I know I said I was going to take a break but I was thinking 5 days for sure, maybe 7. I was not thinking a month.  I guess that is what I get for complaining.

You are probably wondering why a doctor would say that to me. I haven't mentioned an injury. Well, I was using the "Don't talk about it, it will surely go away" approach.  Didn't work.  My heel began to bother me again awhile ago.  I continued the stretches I have been doing all along and hoped it was just a short visit. For a long time it was barely noticeable and I did seem able to keep it at bay. During September I have been thinking I needed to actually see a professional about it but it still wasn't hurting  a whole lot.  So I thought I should go before it did.

I am sure the pain, no matter how much, was contributing to my negative feelings about running.  It wasn't constant or even present on every run but I was afraid it would make an unwelcome appearance.  It did not hurt at all during the half marathon but it hurt the most afterwards that it has hurt in a long time.  So I took it easy this week with just 1 bike ride.  I guess now I am going to find it easier to fit in those bike rides.

I am most disappointed about my race in NH in one week. This is the one I signed up for with work friends.  I have permission to walk it which does not excite me in the least but I will do it.  I'd rather take it easy now so I can do more running later.

I can bike, swim, use the elliptical :( and on and on.  You get it. A lot of you have been here or are here. Another thing that does bum me out is the speed that I am beginning to build up will disappear again.  Oh well.  At least I had a GREAT time at my race last weekend.  I couldn't have felt better.  Now I'll get healthy again so I can do my favorite half in February and others in the spring.  And I plan to be running in that new Santa race in December.  This is a pause.  Not a stop.


2.  I am slowly working  my way through all the library books I got out.  Some I have not finished. Some I skimmed.  So far there are none I am in love with but that is the beauty of library books. It doesn't matter as I only borrowed them.  Right now I am reading The Submission which has a good idea but hasn't captured me.  It is one I will finish though.

3. I had a good bike ride on Tuesday. I took my camera to get some pictures but before I knew it the sun was setting.  Shorter days is not something I like about fall.  But the temperature was great. I went on the road where I got my flat. Believe me I approached all those pot holes much more slowly!

There is some color out there but it is not spectacular yet.  I hope to get out on my bike this weekend and see some more color although I have been paying no attention to the forecast. 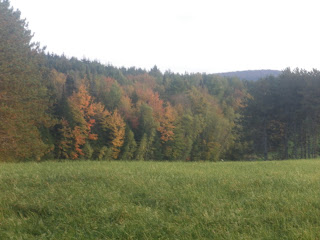 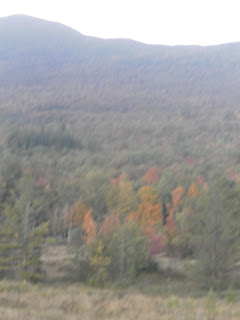 Bah, heel pain. Sounds like you're keeping a good attitude about it, though. And being smart to take care of it before it gets worse. Heal quickly! :)

Oh no!! At least it's only a month! I know that's not what you want to hear but hang in there and build up your strength with your other training activities! Take care and rest up!

get well. you need your heel to heal!

It goes by the house of the guy who's hosting, just a couple miles from my house. So Jeff would have to drive Jacob and the bike over. I'm trying to decide if I'll ride over or just let Jeff take me.

Boo on the heel. I totally get your strategy on not acknowledging it in hopes it'll go away. It's a favorite of mine. Here's to a speedy and full recovery. In the meantime enjoy those fall colors as they develop!

Oh no! Is right. I hope you take it easy enough to heal up in a month :(

boo!! this should have waited until like, february, when it's miserably cold and there is only like 2 hours of daylight anyway. :-/

try to embrace the cross training - you could come back in better cardio shape! and at least you can still do *something*. i know it seems like the end of the world (ok, well you're not that dramatic by any means but you know what i mean) but it could always be worse right? (just trying to be encouraging!)

hope the heel appreciates the time off and rewards you with a winter + 2012 of painfree running!

Ugh, sorry to hear. I'm doing the Santa race too. It should be fun!

Ugh, sorry to hear. I'm doing the Santa race too. It should be fun!

Oh man girl, I am soooo sorry!!
I'm telling you though, taking time off is not a permanent answer!!! Read my blog post on what I did to over come this nightmare...taking tie off actually makes the whole situation worse, and most podiatrists don't understand this. Contact my friend, Ron...he was the ONLY person who was ever able to get me back on the road running!!

So sorry to hear about your injury - hopefully you'll be able to get it sorted out this fall.

What! You didn't share your injury with your most sympathetic virtual friends?!!

I DO understand the head in the sand technique of reality avoidance and have employed it regularly BUT the news eventually gets through and we can send you healing vibes and messages of support. Hope your injury is short-lived and you're back running really soon.

Sorry about the damn heel. I totally understand you not mentioning it - I'm still getting a lot of discomfort in both my heels, and I keep it quiet too. I'm ignoring it, and hope that by cutting back on running when it hurts, it'll go away... Good luck.

Andrea, I am so sorry. Hugs. Now I understand where your mojo went. But I do love your attitude. I know you will enjoy your biking and hopefully the elliptical too (if anyone can enjoy that machine).
I am sure that with some rest you will be back running in no time sharing your beautiful winter running pictures.
BTW, nice fall colors out there. We are boiling here in 90F temps.

Sorry about your foot. That stinks, but at least you can still remain active - that's a bonus. I completely understand though...you stop doing something for a month and it's like starting all over again. It's been over a month since I was able to swim...it's going to be so hard starting back again.

Oh no! I sure do hope you feel better, but I have to agree with Jill. Taking time off is the wrong answer- my friend, and podiatrist, who is also an IM finisher and runner...had me working out and running through my recovery. yes, I would wear the boot all day and run at night. So far, so good too!

I feel your pain. I'm glad you had such a great half! It was great sharing it with you...I know you'll be back!!

Sorry to read this but I'm sure the month will do the trick. Luckily you have the biking that you love and can still get out there. Thinking of you!

Oh no...sorry to read about the heel acting up again. Thank goodness you can still bike and enjoy being outside. Do take care!

Oh no Andrea, I'm so sorry for you. Somedays we don't want to run but not being allowed to run sucks.
I hope you take doctor's advice and take the month off and by then you will be better.

I love fall, even the shorter days but right now we're having Summer temperatures here. Not fun at all! I was done with Summer and now it's hot. It's October for crying out loud! Enough complaining.

Get well soon, take it easy and have a great weekend.

Sorry to hear it! Luckily the weather is still good for the bike so you can get an outdoor fix. I've had PF before and seriously, the best remedy I've found is ditching shoes whenever possible. Give it a go!

oh no!!!!! Thank goodness it is still warm enough so you can ride the bike. Hang in there, the month will be up before you know it.

Sorry to hear about the heel pain. :( Try to be patient and enjoy those bike rides (bundle up). FX that you are on your feet again soon!!

oh, boo on your heel! but fall is a gorgeous time for cycling, hopefully the month will go by quickly!

Sorry to read this. One month is long but soon it will only be a memory. Fortunately you can bike and swim.
Good luck and get well soon.

I'm sorry to hear about your injury: I hope you'll feel better soon!
The 2nd photo which you posted shows the colours of Autumn :)

Oh geez, not again, I am so sorry! But like you said, you can swim, bike, and do the elliptical to keep your cardio up and hopefully you'll be back to running once that nasty little heel gets a little rest.

By the way-congrats on your half marathon (from your last post). You had an awesome time and kudos to you for taking third in your age group!

oh no, i'm so sorry to hear about your injury! i'll be sending you healing vibes.

I'm just coming back from my hiatus. I'm so sorry to hear that you have to take a month off from running. Fortunately, you have lots of cross-training at your disposal to stay fit during this time off. And you have lots of books to read! :) Hang in there! You've got lots of people rooting for you! :)

I'm sorry you don't get to run for a month. I hope you can still bike and do other activities. Take care so your heel feels better!

Sorry to hear about your injury. Hopefully with a month off you'll be good to go. At least you still have nice weather for biking!!