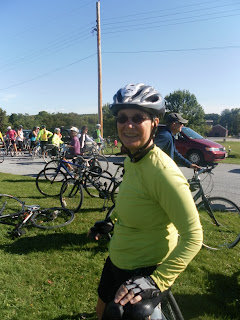 Tour de Farm has come and gone for another year.
First - I loved it.  Second ... I didn't love it as much as last year.  I am not sure why but it could be because it wasn't my first.  I knew what was coming. I had some anticipation as to certain samples and they had changed.  There were not many sweet things and I have quite a sweet tooth.

The weather was fantastic. It could not have been better.  I rode with 4- 6 people for most of it but rode with is a term I use loosely. I rode with them some of the time but I find as in running I really like to go at my own pace.  I would ride with someone for a bit and then just take off on my own and wait at the next food stop.  There were a lot of hills and I wanted to use the downhills as much as I could to get up the uphills.  (I didn't remember that it was as hilly as it was.) The second half seemed to be mostly hills.  But we did it.  And I DID NOT WALK up any hills!  There were people there on single speed bikes to road bikes.  I was impressed with kids who rode the whole 30 miles!   There were a lot more people then last year perhaps because of the weather.  Samples were smaller and you couldn't get a lot of repeats whereas last year you were encouraged to. 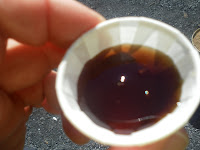 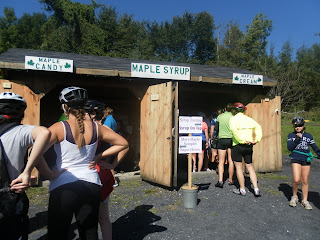 The day started again with maple candy and drinking maple syrup.  My husband would be appalled that I chose the darker syrup instead of fancy grade but it is what I like.  Getting to this stop is the only time the riding is really crowded. It is single file for the first mile or more as you make your way from the start to here.  You begin in waves of 50. 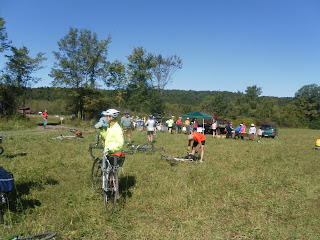 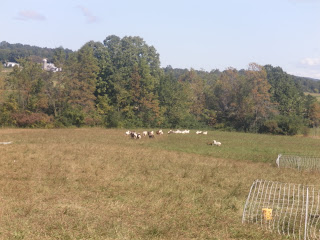 The second stop was the one many people skipped.  Last year it was at a farm right off the road. This year you went down a very rough road into a field for at least half a mile (which meant you would be coming up later.)  I did see one rider with a flat here.  My heart felt for her but she seemed to know how to fix it.  The samples here were applesauce, blueberries, unbelievably good hard boiled eggs, honey, and there may have been more.  Only one of the riders in my group came down here with me. I hate to miss anything!  The sheep here seemed to wish we had all skipped it as they took off running at as fast a clip as they could go! 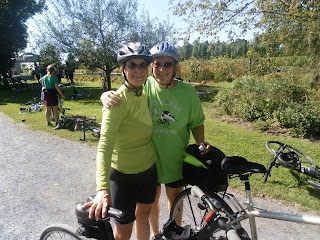 We met back up with them at the next stop which was my favorite last year (squash and cookies)  Well they had neither of those this year. The big deal was tomatoes - prepared in various ways and many varieties. People raved about them but the line was l..........o.............n...............g and I am not a big tomato fan so we skipped that part. I did sample some turkey sausage with chipote on it.

It was a fair distance to the next stop which was a farm stand that went with an apple orchard.  The samples were a small taste of cider and a bite of apple.  The cider doughnuts were the big thing here but I bought an apple instead. I was craving more apple.  This place was packed  the whole time we were there.  We spent a fair amount of time at each stop - eating, talking, seeing other people we know. 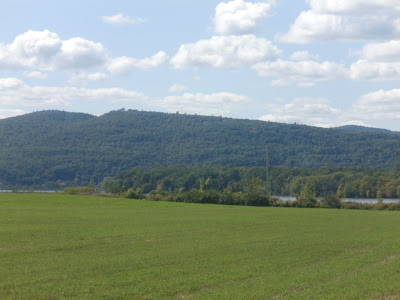 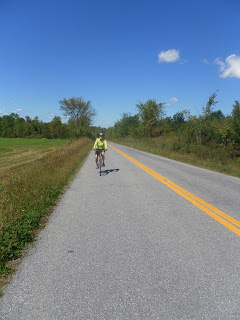 The next part of the ride was very pleasant along the lake. It wasn't too hilly until we went toward Orwell and then there was a lot of up and down.  Once there there was a variety of samples and pizza for sale on the green.  The smoked turkey breast was my favorite sample of the day. I did go back more than once for  this. I can't even remember what the other samples were as in my mind the turkey was so much better than anything else.  We did buy and split a pizza, all organic. 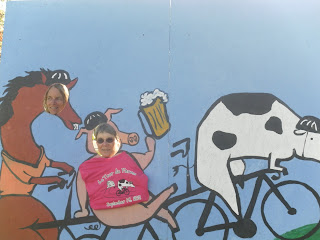 While there we managed to be just  bit geeky too taking our pictures in this special tour de farm portrait. 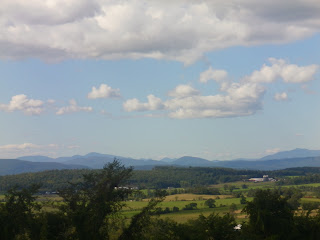 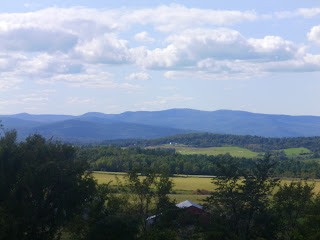 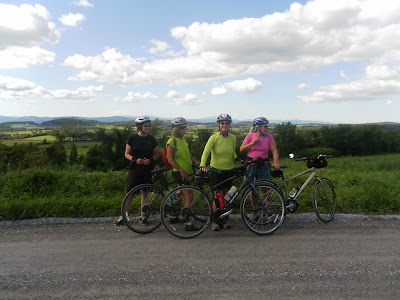 Then the next stop was the winery.  To get there we had to go up the biggest hill of the day but were rewarded with spectacular views at the top.  Some of my party skipped the winery as it was another long trek up a woods road into a field.  The problem was there was grape juice and more cider but no wine.  ???? Luckily all was not lost as the guy brought out an apple pie as I was standing there - apparently the only one of the day and we got a sample.  YUM! 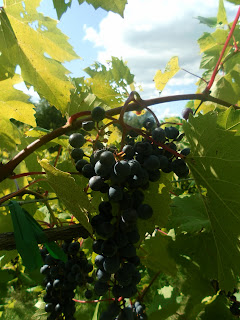 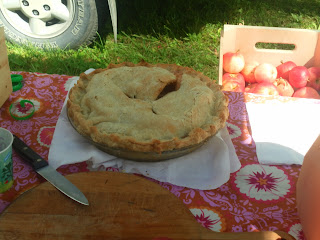 There was one more stop which was drinkable yogurt. This stuff is delicious and I was looking forward to it all day.  From there we continued our roller coaster ride back to the start up and down and up and down.  The bad hills were the ones where there was no down first.  But 30.5 miles later we made it back to the green.  I was a bit surprised at how late it was. This event took the whole day. I don't know if it started later or we just took much longer at each stop.  Whatever..........no worries........we all had a great time. 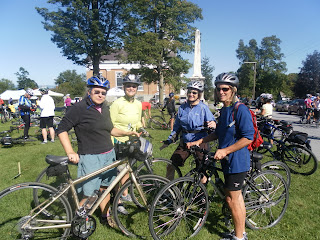 It was another great day for a wonderful ride in Vermont.
Posted by ajh at 9:49 PM

I like that they saved the winery till almost the end. Can't have all you cyclists meandering along the roads. It sounds like an event that you can't rush so that's probably why it took so long.

I can see where it might be hard to live up to how good your last year's memories of the ride were. What a great day outside with friends and bikes, though.

Gosh, so many tasty treats on that ride! I LOVE maple candy, it is so foreign to me because it's not even for sale around here but I love it!
Your beer can story cracked me up! Someone once gave me a bottle of apple wine that I was afraid to throw away at school so I stuck it away in my cupboard and forgot about it for four years! Just found it and drank it after school! Just kidding. I threw it away...at home :) .

Sounds like a great day even if you like it better last year. Are the samples for free or do you have to pay something to participate in the Tour?

I just love it! I believe we have something here too and definitely will look into it for next year.

Great photos from my part of VT. I met a lot of bikers when I was driving yesterday I looked for you. How was the drinkable yogurt. I love that stuff!!

What a cool idea for a bike tour! I love maple anything and will use it as a sweetener in place of sugar any chance I get. As usual great pictures!

What a wonderful day! :)

What a cool way to enjoy a ride! And that apple pie looks so awesome - especially after a long ride - yum!

What a great ride! You have to love a ride that gives out pie samples (even if there was only one - lucky you!)

wow does this look delicious! i loving cycling tours...the food is amazing!

The food sounds great, and it looks as though you were lucky with the weather.

PIE while riding, this is my idea of heaven. Sounds like a beautiful ride through beautiful country with great friends.

As for your comment on my last post:
1) no I don't usually travel quite this much. I travel a lot within the state but always like an hour drive or so not usually this many overnighters. I've been really enjoying it but I also kinda wish it was more spread out. While I've been check email via smartphone it's still backlogged and making me feel slightly overwhelmed.
2) the columbia omni titanium jacket is lightweight and even have zippers under the pits for air ventilation if you did get warm and it wasn't raining. I definitely need to do a review, this thing seriously saved me from being a drown rat over the weekend. I foresee many many more uses from this jacket.

I think those were your questions!

It's easy to see that you enjoyed cycling and that wonderful landscape. Nice report!

What a neat event. Sounds like you had a good time. I wouldn't have wanted to miss anything either.

Love the tour de farm portrait. I've been missing your posts & pictures!! Glad to see you are still kicking butt!

The pie would have been my favorite. See you on Sat!!

I would really love to do something like this!! What a great way to enjoy the day. Great workout and some tasty treats along the way.