1.  I had one decent run outside, two great workouts at the gym and finally it stopped raining and I had a good bike ride today.  On two of my runs I did a run/walk which I haven't done since I started running.  I felt like I had lost my mojo and decided it was worth a try.  I thoroughly enjoyed both runs I did that way (10 minute run - 1 minute walk) and then I did a run yesterday on the treadmill at a good pace with no break.  I like switching it up.  Tomorrow I am taking completely off although I will miss my Friday afternoon bike ride. But I am racing on Saturday and it has been awhile since I had a day off. I also have lost my racing mojo. I am not terribly excited about racing and it has been a month since I raced. But it is on the bike path which I love, my son will be there and the sun will be there!  After racing I think I will ride!  The race is a 5K and I would dearly love to be in the 8s but that has only happened once this year. If not I want to be in the low 9s. 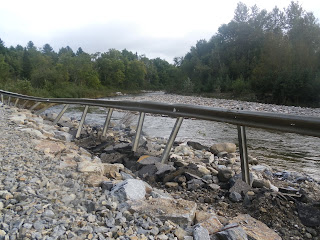 Another road washed out although they have started repairing it. 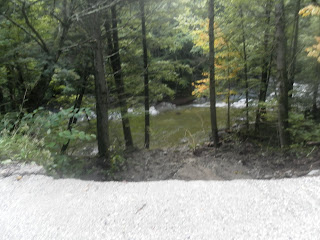 This is hard to see. It is a deep drop off from erosion.
But I was careful as I snuck around the cone to take a
picture. See the article below.
BRATTLEBORO — Police in Brattleboro say a man has died after riding his bicycle into a section of road washed out by flooding from Tropical Storm Irene and into a brook Police said they received a report at 9:30 a.m. Sunday of a man’s body in Whetstone Brook. His name has not been released pending notification of relatives. Investigators believe the victim rode his bicycle around several barricades on Williams Street and fell into a washed-out section of the road and into the stream. 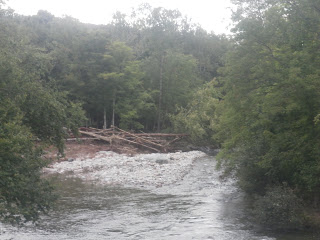 This is looking off a bridge at the trees stacked up
where the river flowed during Irene.

2. In my last post I talked about lots of books I am reading or going to read.  What am I watching though? I am watching the final season of Brothers and Sisters.  If you have watched that do you have a favorite character?  Mine is Scotty for sure.

3. And what is it with not biking when it is raining?  Last year when I was only biking and not running I biked in everything. Seriously. I biked in rain, torrential downpours, cold, snow, more rain.  Now I am a wimp. If it is raining, I run either inside or out.  I still don't mind running in the rain but biking?  I seem to have crossed that off my list of choices.  Yup.  I'm a wimp. 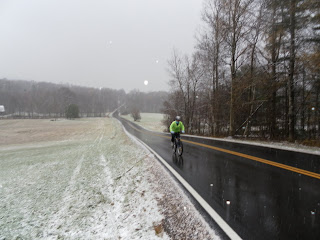 Yeah...I'm more of a fair-weather biker, too. I did ride my mountain bike in the snow, but that's been a while. I find that I'm even more of a chicken on my road bike because of those skinny, slick tires...though I'm not excited about the idea of riding my mountain bike in slick mud, either. I'm ok with embracing my wimpiness for now.

Hey, I'm running in a 5K on Saturday, too! It'll be my first 5K since...geez...last July? It's been awhile and I don't expect any PR. I'm running it with a friend who's doing his first 5K, so it's yet to be determined if I run it WITH him or AGAINST him. :)

How very sad about that many who was killed. I'm glad you were careful getting your pictures! My friends and I went out for a ride last night and skirted a road closed sign on the trail, but it was only closed for fresh cement, and we got the OK from the guy guarding it to carry our bikes around the spot.

Good luck in your race!!

I don't think I would enjoy biking in the rain either...in fact, it terrifies me.

Good luck with the race, Chica!! I think you will do lots better than you think! ENJOY!

I'm definitely a fair-weather biker!! I ride on my trainer indoors during "winter." I had to put it in quotes, because I'm indoors for anything below about 60 degrees - ha, ha! I'm a wimp for sure.
Good luck at your race, I predict a nice return of the mojo just in time to run strong! :)

I've been caught in the rain on my bike but have never intentionally rode in it. terrifies me.

Good luck on your race! Running is certainly more "convenient" in inclement weather than biking. You have to use so much gear to comfortably bike in foul weather that it makes it more of a burden than it should be.

if you are losing your race mojo, maybe it's time to look for some charity rides (that's my new things of interest). keep it real; keep it fun!

i don't cycle in the rain because I am not great a bike handling in wet conditions. safety first!

Have a great race!

Biking in the rain makes me extra muddy, no fun.

And I'm sorry about the loss of your friend.

GOOD LUCK on your race!

I loved Brothers & Sisters and I'm sad that it got cancelled :(

I am definitely a wimp on the bike and will avoid rain at all costs... especially now that we have a trainer indoors. :)

Have a great weekend and good luck at the 5K!

Mojo comes and goes. Take some time off, enjoy whatever physical activity suits your mood. As long as you keep on moving you will be fine.
I will be sending some of my mojo your way. Seems that right now I have plenty to share.
Enjoy 5k and have a marvelous weekend.

You are making a very good job with the cross training. In my opinion alternating run outside and on the treadmill is a good training because you use different muscles.
I love to run in the rain. Biking I don't know, I have never tried.
Good luck for the race of today.

No. I haven't read State of Wonder. It's worth reading??

I just got a book from the library today that Kovas recommended: Holding Lies by John Larison. I think it's based in Oregon and by an Oregon writer, so I thought I would check it out.

Is that snow in the very last picture?