A Weekend of Biking and Running

Friday after school I made it back up to the bike path for another glorious ride.  I was slightly later which meant fewer people and I caught the beginning of the sunset.  It is such a wonderful thing to do on a Friday. I wasn't particularly stressed this Friday but it still relaxed me immensely.  It isn't hard riding but it is certainly pleasant riding.  First I saw the sailing school out practicing. 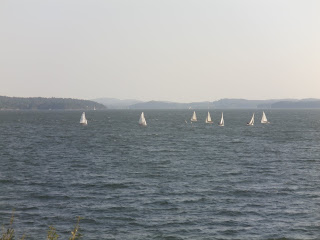 I made my way up to the bike bridge. 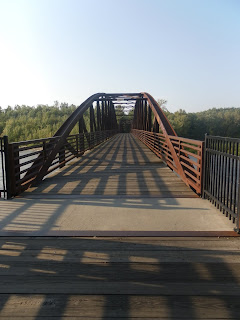 Eventually I was as far as I wanted to go and went south. On the way back there are some nice spots to stop and look at Burlington harbor. 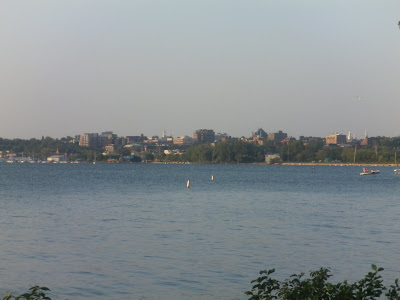 A lot of you liked my "bike" picture last time so I took it again in a couple of different places. Here is one of them. 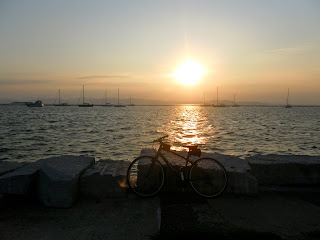 Nice, right?  As I said it was a glorious ride.
Saturday I got up early and T and I ran 11 miles.  Neither of us would call it a particularly great run.  Today we ran 5 and that went much better though still not terribly fast.  It was humid even early!  When I got back I changed and then headed out for a bike ride. I took the loop that I haven't taken in awhile. First I looked up the Green Mountain Stage Race (a 4 day bike race) on the Internet as a lot of it was the course they were going to be riding.  They had barely started and had 60 miles to go over two mountain passes so I thought I had plenty of time not to be in their way.  They call the part I was on Baby Gap. They did have to adjust the usual routes due to all the road damage so I wasn't sure if they would be on this road or not until I looked it up. 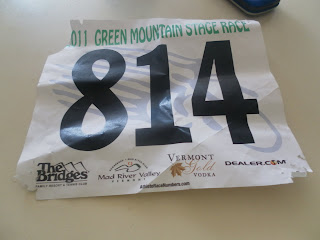 I found this on the side of the road from Stage 2 (today
was Stage 3) and couldn't resist picking it up. Of course I
wasn't pretending it was mine.
I could see more road damage here as I could on the 11 mile run. There were a lot of roads closed - but still nothing like the rest of the state.  We are supposed to get more heavy rain tonight but let's hope that doesn't happen. 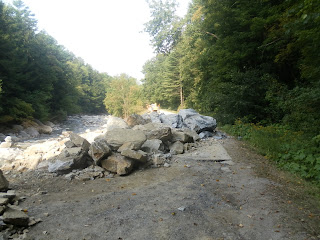 When I came to this part of the road by the river I had to
get off and walk! 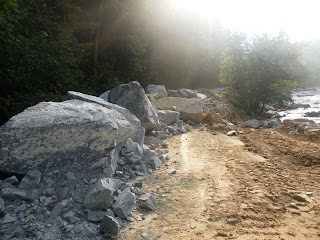 Here is the peaceful river now.  Let's hope it
stays that way. 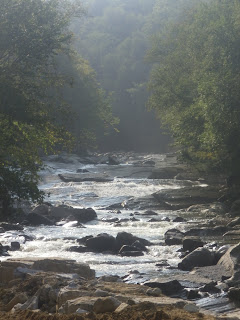 When I got home from my ride as I was coming up the driveway it started to thunder.
The sky was rather ominous looking but nothing much happened. 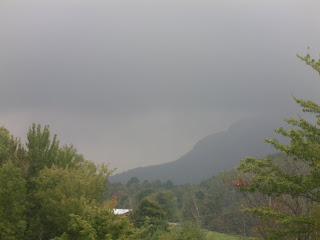 The damage that's been caused by just a bit of water has been quite incredible. And yes, I meant the 'just a bit' tongue in cheek. It always amazes me just how powerful it is. I hope you get your roads and paths back into biking and running shape ASAP.

Your pictures are wonderful as always. My schedule was a little off yours...bike Thurs, swim fri, and then I ran 11 on Saturday, too. Tomorrow I'm back on the bike with my brother, which should make for a great morning. :)

Glad you're making the most of our last gasp of summer freedom. Next up...Columbus Day weekend! :)

You always make your runs and rides so interesting and I think that's why you enjoy it so much. The damage is quite scary. Respect the forces of nature is what I think when I see that. Have a great week!

This *was* a glorious ride. You certainly live in a very beautiful part of the world. Can't wait to see your pics when the trees change colors. Ah, the fall in New England.
Have a great Labor Day!

What great bike rides. You weren't temped to put on the bib and pretend you rode it too :)

It's so beautiful up there, can't get enough of looking at your photos every time.

Nice sunset! That black sky looks very familiar to me - we get that a lot in the UK!

you have such beautiful scenery for your runs and rides. i'm envious!

Oh, how I wish I could stop and look at the Burlington harbor....

Great scenery as always! There are never enough glorious days of summer to get all of the runs and rides in that we want - ever notice that? Have a great week!

more beautiful photos! its sad to see how much damage was caused by irene :(