A Tribute To My Friend Elaine

This weekend I did something way out of my comfort zone.  A friend from my childhood passed away a little more than a week ago.  In recent years she was a frequent substitute at my school.  Before we both had kids she was my exercise friend, mostly biking but in recent years she wasn't someone I did things with as we had gone in different directions. But I still liked her immensely and enjoyed seeing her at school.  I could catch up with her there on a frequent basis.

About three years ago she was treated for melanoma.  Last year she   found out she had brain cancer.  She had a few surgeries but none were successful.  She bravely came into school to talk to us individually and let us know what was going on in her life.  She had one daughter who just graduated from high school.  Her husband has some issues and is not really present for parenting or support. Everyone is worried about the daughter and it is a very sad situation.  Sorry I am making this a long story.   Her brother and friends planned her memorial service (She has unbelievable friends, I don't think anyone could have better ones) and her brother asked for someone from school to speak at her service.

Even though I am a teacher I DO NOT like public speaking. I am fine in front of students but a roomful of adults gives me hives.  Throw in the emotions involved in a memorial service and it is a recipe for disaster. I checked with the school secretary though and no one had come forward to do this.  I knew that she considered her substitute teaching a very positive part of her life and I wanted this to be included in the service for her. So I said I would do it even though it is so not my forte.  I pleaded with people to give me some anecdotal stories and enough came forward and did so.

I wrote out what I was going to say and was pleased with it.  Two parts near the end were apt to make me tear up so I read it out loud several times at home.  When T came the next morning to run I read it to her  a couple of times.  I thought I would be okay.

I can't tell you how nervous I was. I never do well at funerals. I bring all the deaths in my life with me.  Obviously this is true for everyone but I feel I am particularly poor at accepting death. Both my parents died at different times when I was in college. I  truly feel I have never gotten over it and tear up thinking of them to this day.  I am not telling you this for sympathy but I feel it plays into it.  When I read the piece I was much more emotional than I wanted to be. I really disappointed myself.  My voice was shaky although I did try to look at people and have inflection! At times I felt like I could have been speaking French for my knowledge of what I was saying.  But people told me I was perfectly clear and emotions were fine in this situation. I felt like they were just saying this but I need to stop being so negative. I stepped up when  others didn't and did something I felt was important in spite of my immense discomfort. I did it for Elaine and I hope somehow she heard the love and appreciation the students and teachers had for her. She was a very special person who died way too young. 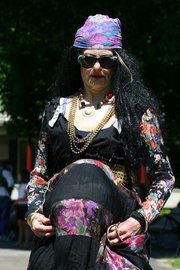 Elaine was a big part of our Fourth of July
parade always on the "fun" float
with a lot of dressing up and silliness.
Posted by ajh at 7:06 PM

I am so sorry for your loss.

You were so brave, and did a beautiful thing to honor her memory.
<3
Well done...

Hugs, my bloggy Friend, lots of hugs.
You are one brave lady, you know.
And one more comment, I truly hate cancer.

I'm sorry for you loss. *hugs*

You are so brave. I have never and probably will never speak at a funeral. I can barely listen to others without crying much less speak myself.

It's good that you stepped up. That's never an easy thing to do. I feel like I'm the exact opposite when it comes to death. It definitely affects me, but I don't know how to show it, instead looking cold and callus.

Thanks for sharing this story.
Cancer sucks. Friends, like you, rock! :)

So sorry for your loss of Elaine. I am sure she was smiling down on you as you stood up and honored her.

I'm sorry to read this...it is so sad when people die so young. But seriously it is awesome what you did for her, for her family. I think it is perfectly natural and wonderful to share the feelings that you are having at that time. You honored her well I am sure.

So sorry for your loss...it's so sad to read about a daughter losing her mother so young.

What a wonderful and courageous thing you did...how nice for her family and friends. Yes, courageous, because sometimes, things happen in life and we have little choice but to be courageous. But, this was something you had a choice about, and you chose to step out of your comfort zone and honour her memory. Wonderful.

Very sorry about the loss of your friend and especially the situation in which it leaves her daughter. I hope the dad steps up or another family member can.

I know very much that feeling about funerals. It doesn't matter how distant I am from the person whose funeral it is, I start crying as soon as I get there. My aunt asked me to do the readings at her husband's funeral and I could barely get the words out I was crying so hard. Can't imagine having to read something I'd written about a friend.

I'm sorry about your friend. So great of you though to do something that no one can really be comfortable with - speaking at a funeral. I think most people want to be able to do something for the family & friends and to take part in sharing in the remembrance of their loved ones but it's so incredibly challenging to speak at times like this. I hope you are doing ok now and are finding some peace.

I am so very sorry, that is so difficult to handle. I am sure she was honored you spoke, she is smiling down on you with pride!! (hugs to you)

I'm sorry for the loss of your dear friend. I'll give you a big virtual hug.

I know how you must have felt, I did the same as you did on my Dad's funeral and speak in public and cried. But you know what: it's okay, nobody will judge you for that. It's okay to show your emotions.

So sad to read this. Sorry for the loss of a special person. You showed just how special you are as well. You did a wonderful thing. Thinking of you!

How sad to read about your friend. You did an amazing job and sometimes it helps to bring some closure when dealing with a loss.

What a great friend and a nice tribute! Sorry for your loss - hold on to those great memories you have with her.

Sorry for your loss. I too was a teacher for over 22 years & understand how different it is being in front of the classroom to being in front of a room of adults. It sounds like you stepped up and did a great job.

So sorry to hear about your friend... I am sure your tribute was lovely, how brave of you do step up and do it for her.

I was so sad to read this in the paper. I remember her well subbing while I was at BES. I'm sure your tribute was wonderful, thoughtful and kind, just like you!

I'm so sorry for the loss of your friend. You will never regret standing up and sharing about her, but the regrets could have been many if you had not faced your fear. I'm sure she knew what a wonderful friend she had in you.

I am so sorry for your loss. Cancer is a horrible disease and hope it time that it can be eradicated.

I am so sorry for your loss, she sounds like she was an amazing person and the fact that she inspired you to step out of your comfort zone and speak for her says a lot about the person she was.
Cancer sucks. And it takes way too many people waaay too early.

Oh, I'm so sorry to hear this. It sounds like she was a wonderful person.

I'm so sorry for the loss of your friend. I would have been terrified in your position as well, but I know you honored her well.

Andrea, I am so sorry to hear of the loss of your friend and I admire very much what you did in honor of her memory! It must have been very hard but I am sure, wherever she is now, she received the good vibes and love, and I am sure it was a great comfort to her daughter to hear how special her mom was to her colleagues. Hope all goes well with her in the future - it must be so hard to lose your mother, or in your case, both your parents, as a young adult. My thoughts go out to you both.
Hugs,
Amy

I think most people would be shaky-voiced in this situation! I'm sure you handled it just fine. I'm sorry to hear of the loss of your friend. I try to remind myself that they are now living pain/illness-free in heaven now!

Big hugs to you!

I'm so sorry. What you did was so brave. I've already told my family that I won't speak at any of their funerals although I will probably write something. It takes such strength and courage to do so and I'm sure you're glad that you did it for her sake.

I'm very sorry to hear about the loss of your friend. {{{HUGS}}}

A quote comes to mind, "It not you than who, if not now, then when?" It is a tremendous gift you gave your friend, her family and friends to pay tribute to her in such a public way. To honor one is to speak of them fondly and often for then their life he was not wasted.

I am very sorry for the loss.
This post is an important tribute to remember her.