This morning when T and I ran it was 30 degrees.  30 degrees!  I wore two layers of long sleeves, a headband and gloves which I never felt the need to take off. I am not complaining but that change happened fast!  We cranked out 8 miles. While we were running we met several cyclists which is not usual. They had come over Lincoln Gap (starting in the dark) and were doing 6 gaps today.  They apparently do this every year.  One gap couldn't be done as it is not passable still from the flood so they were going to do Lincoln twice which I am guessing is the steepest.  A friend of T's did it earlier this year and I forget how many hours it took but it was a lot.  There is a lot of riding just to get from Gap to Gap to say nothing about going over them. I was a tad envious all day - not of the actual ride but of the goal and how they must have been feeling fulfilling that goal!  They had a great day for it.

After our run I did my stretching and then proceeded to get a lot done around here since I will be busy tomorrow.  Later in the day my husband needed a ride to Shelburne so I brought my bike and got a short ride in.  I was along the lake for some of it. The sun had disappeared behind clouds and it was cool but great for biking. I had brought along my coat thank goodness.  My husband told me I wouldn't need it but apparently his blood is thicker than mine. 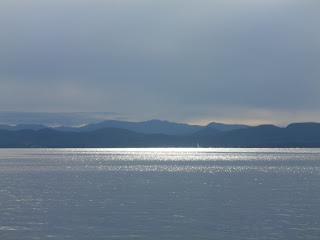 One of a few wonderful views while I was riding. 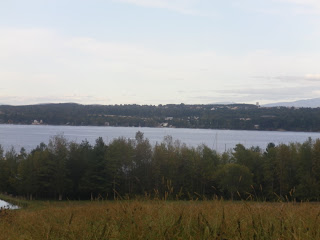 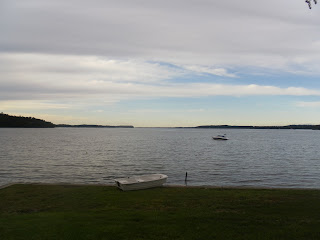 On the reading front I finished State of Wonder by Ann Patchett and enjoyed it a great deal. I keep asking who has read it as it is a good discussion book.  I am reading yet another book by Leonard Barclay who I talked about the last time I mentioned reading.  I love finding a new author I like. He writes thrillers which I love.  I have three more on reserve at the library.  Has someone else recently discovered him too as all his books are out, not just the new ones? I plan to get the ones the library doesn't have with a gift certificate to a bookstore.  I also went back to Borders but I only found two books this time. I missed getting one because I thought I bought it last time but I had not. No worries though as the library has it.

Enjoy the rest of your weekend.
Posted by ajh at 7:41 PM

oh my! You all went straight from Summer to Winter!

It's chilly-ish here as well. Tomorrow's run is going to be 54 degrees...I'm not complaining as long as snow is farrrrrrrrrr away.

Snow is in the air. :-) Just kidding.
Love the first photo!!!
We are enjoying cooler temps here too. Cooler means 56 at 5am.

It was chilly here too - but only low 50's chilly! Funny how it went from blazin' hot to freezing cold in just a few weeks. Where is fall???

Unfortunately, we are nearing the precipice... Cold will be upon us quickly, along with these short days. So get out whenever you can for as long as you can, right? :))

We were just talking about the fast switch between HOT summer and CHILLY fall, going from
93 to the 40's overnight. We'll be back to the 80's early this week, but they're calling for chilly temps by next weekend...just in time for me to spend 12 hours outside in the woods. :-/ I'm just hoping for no rain!

You'll find that biking is a LOT colder in the cold than running. The wind on you makes a big difference. That gap ride is a pretty cool idea. And I'll be jealous of you tomorrow thinking about your farm ride. Have a blast!!

I haven't read any new books in over a month. :( I hate that I have nothing to contribute to the book discussion.

Wait! What happened to Fall? :)

We had a 30 degree day yesterday and a 32 today but ours is Celsius and it was hot! And I want to go back to Winter because Summer has forced Spring out of the way. :(

Yeah, we had a few pretty chilly days, but today is beautiful! Perfect bike and running weather this whole weekend :)

Isn't the weather just the craziest thing. How can it go from Summer to Winter. I've been freezing all weekend because it's dropped into the 50s.....I can't imagine the 30s yet!! Brrrr!

we went from highs near 100 to 50deg mornings in the matter of a week. no complaining, but it does take time to remember how to dress

Yes, same here too, lots of crazy weather changes, but I am loving it! Good job on your runs/rides!

Brrrrrrr! We have hit our rainy season =(. I'm hopeful we'll get a few nice days in October when I'm hoping I'll get out on the roads again.

I think it may have dropped into the 40s last week one morning down here but you can keep your 30 degree weather!
Those photos are breathtaking!

I'm loving this cooler weather! Too bad it is warm and humid today. Stay warm!