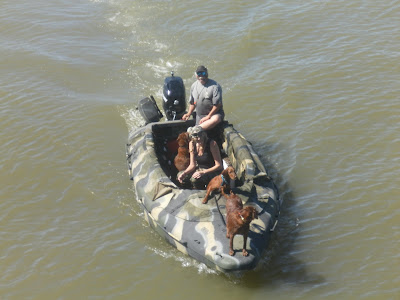 These dogs looked like they were having the time
of their life. I took this from the bike bridge. 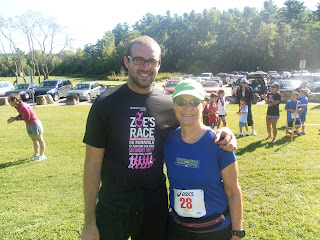 Jameson and I before the race.

Best Race of the Season - (Actually A Tie) I did it. My pace was in the 8s.  8:58 but in the 8s.  The race was a little short so my overall time looks better than it was but each mile's pace is still what it was and the overall pace was 8:58. Two of the miles were in the 8s with the last mile slowing a little. I am very happy!  My two fastest races were on Lake Champlain with lots of the race running along the water.  Maybe a little inspiration?  It was a gorgeous gorgeous day!  The sun was out, the temperature was in the low 60s and it was a glorious day to be racing (or doing anything) in Vermont. 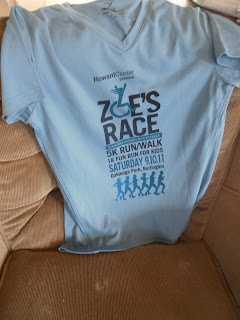 The shirt. I like it - it is v neck and has a woman's
fit. I LOVED the coloring of the volunteer's shirt
that Jameson is wearing.

The race was for a good cause.  Here is what the race sight says:


The first annual HowardCenter Zoe’s Race was held on August 30, 2009.  The idea for the 5K race was sparked when Erika Nestor began a remodeling project to make her home accessible for her daughter Zoe.  Zoe, who is now 8 years old, is in a wheelchair as a result of a near drowning accident when she was 18 months old. During this process Erika was surprised to learn that there were very limited funds available to assist families with remodeling costs related to accessibility.  The Nestor’s were fortunate enough to be able to remodel their home to make it comfortable and accessible for their daughter, her brothers and her caretakers.  Erika was thankful that she was able to make her home accessible, but worried about other families that may not be so fortunate. Erika teamed up with HowardCenter and “Zoe’s Race” was born.
HowardCenter’s “Zoe’s Race” is a 1K fun run and 5K race to raise funds for Vermont families who are in need of creating accessible homes for their children. In its first year, the race had incredible community support and raised over $13,000. “Zoe’s Race” was also awarded a $5,000 grant from the Brenner Foundation. To date, money raised from the 2009 and 2010 Races has been used to remodel homes for five local families.
My son was working at the race which is why I was at this particular race. It was well organized, for a good cause and I will go back. 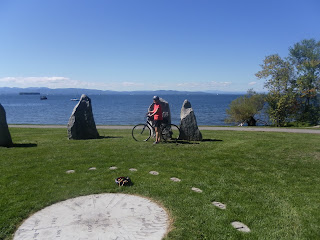 When the race was done I went for a ride on the bike path. So glad I chose to bring my bike to do that because as I said it was a wonderful day.  I ran into a friend at the race who had just biked it and said it wasn't crowded but it was by the time I went, the one downer.  In the picture above I had stopped to take a picture because no one was there and it is usually crowded.  There are 12 rocks arranged like Stonehenge.  A man appeared and asked if I wanted him to take my picture so I said, "Sure."  Well that was a mistake. He introduced himself as Brother John and started telling me all about reincarnation and how he comes here and says the rosary backwards to go back in time and on and on and on and on.  It seemed rude to leave as he never paused for an oppurtunity but finally I thought enough is enough and told him I needed to leave and took off. Next time someone asks if I want my picture taken I will think twice. 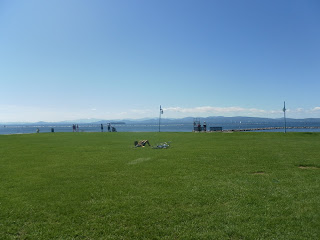 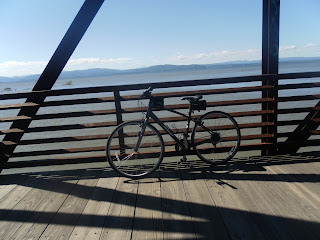 Sounds like you are getting your racing mojo back, yes?
Funny about the guy going back in time. Can he change the history too? I would have a few requests. :)

Nice job on the 8s - major yay!! Looks like a gorgeous Vermont day! :)

Congratulations again on such a strong race!!

What a great cause, too. I like running in races for a cause I support. I like Jameson's shirt, too, and I just love it when the shirts have a women's fit.

I was wondering what your "don't ask who took this picture" comment meant. We've asked other people to take our picture together so many times that now I offer if I see someone taking a picture of their family. No reincarnation talk to listen to, though!

It's always interesting to meet some of the worlds more eccentric personalities. I bet you couldn't wait to grab your camera and hit the path again.

Congrats on running a great race!! See you soon!

Congratulations on your pace! You are a rock star!

Love the last pic! I may have to steal it!

Great running! Love the photos too - shame about brother John!

Congrats on an awesome race Andrea and for such a good cause.

Did Brother John bring Robin Hood or dit he leave him at home :)

What beautiful weather for a run and a ride! Great cause too-- congrats on a strong race!

Great run! Your hard work has certainly paid off as you were able to hit your goal. Whacko's are everywhere but at least he was not violent.

Nice job on the pace! I also think your weather looks gorgeous, maybe too pretty for Sept. since we're back in school. I hope your class is sweet and that the union stuff is okay!

Congrats on your speedy run! Beautiful pics from the bike too (as always).

Congratulations on such a wonderful race! Brother John - yeah, that sounds like something that would happen to me. I totally get what you mean... you want to leave, but don't want to be rude, but at the same time Come on, Brother John! :)