This report is all over the place in no particular order.


Overall Feeling
There are many many things I liked about this race.  I already liked that I negative split the two halves. As I was figuring out some stats about my race I also realized my fastest mile was my last mile!  Yeah! At first I thought it was my first mile but the last one beat it by two whole seconds. I would have liked it if all my miles were in the 9s but two got into the 10s. One just barely got there but the other one was solidly in - but following an awesome pace with a mile that was very hilly.  The second half was much hillier than the first.  I am so pleased with how I did. As I was racing I kept telling myself that I needed to be happy when I finished no matter my time. I was never sure that I would end with a pace in the 9s which is what I was shooting for.  But as I was racing I was having fun, running strong and I never got overly tired.  There were no dead miles. I felt good on the hills.  I had picked out various people I thought I would try to stay with for the race. All but one I ended up passing (and leaving in the dust). The one girl I stayed with was a fair ways ahead of me but I could always see her.  By the time  the race ended she was just in front of me.


The Numbers
Here are my mile splits.  The last mile was THE FASTEST with the first mile being second! Good way to start and end a race! 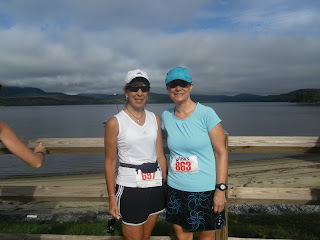 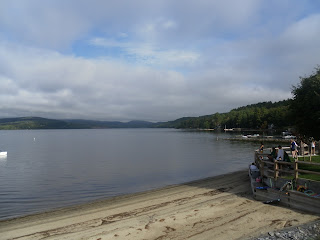 As mentioned the course was scenic but hilly.  There were parts on Route 9 that were nothing special but they were also very hilly so I  was concentrating on getting up the hills, not the lack of scenery.  Even though there were lots of hills at least they were long and gradual not steep. Or as I am always saying when I am cycling they were "doable." 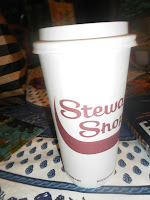 Darlene got us coffee so our
eyes could be wide open for
the race! 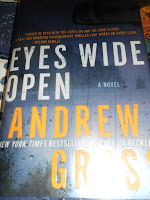 Do you remember the coffee woes from yesterday's post. When I woke up this morning Darlene had already been to Stewarts and returned with coffee for both of us!  Problem solved!

A Little Complaining
Of course I hugely appreciated the volunteers.  There were many of them and they gave so much time. There is a but though.  So many of them said completely the wrong things.  We were maybe 5 miles into the race when a volunteer kept telling people that the worst was behind us, it would all be easy now.  Well, we had 8 miles left and it was the hilly part. What was she thinking?  And at least one volunteer on every hill told us it was the last hill.  We were told that again and again and again and again. Finally one of them was right.  One other thing was that the mile markers were way off. I just ignored them and paid attention to my Garmin once I realized that.  The marathon ones seemed to be right, it was the halves that were way off. 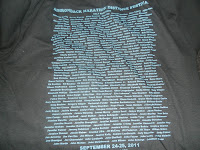 Sharing my Shirt at School
Today at school I was showing my students my shirt.  They thought everyone got a shirt with a star near MY name.  Got to love them!  They know who the most important racer is.
Also one student was immediately telling the others I won an award. Her parents were there and heard them announce it. Today the mother and I were "bonding" on email over other good races and race times. 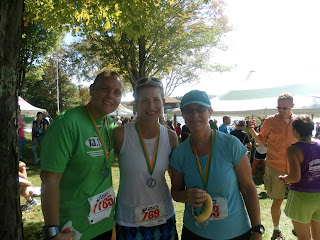 A Bloggy Meet Up
I got to spend a lot of time with Darlene whom I have raced with 3 times now.  I also met some of her friends, two of whom I follow their blogs.  There was Felice from The Happy Runner and Amanda from Manderez Road to a New Life. 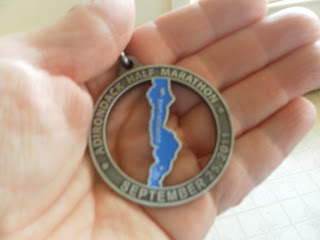 And last but not least the medal. It's a fun one. I'll keep it.

Woo-hoo! Looks like a beautiful area and you did great on a challenging course. You looked good doing it, too - likey the blue top and lovely skirt - way to go fashionista! Neat medal, too. Glad you had a very fun day! :-)

your students are too cute :) of course all the shirts point out your name! pretty sweet that you got to meet up with felice and other bloggers!

congrats again on the race - glad the "bad's" weren't anything too bad.

Awesome! Congrats on a great race and how cool that you placed!! Exciting!

Well, it sounds like cutting back on your running and getting more biking in this summer really paid off for you! Good job and great race report!

I don't blame you for having a little whinge about being told it's the last hill when it patently wasn't. I'm not a big fan of hills and that would have broken my spirit. Well done on such a great race.

What a great race for you! And I am so glad you got your coffee :)
As for volunteers... oh, boy it is like when I am on trails and people going down (it has to be people going down) tell me, huffing and puffing uphill, that I am almost there. Right.
Congrats! Whatever you did with your training obviously worked. And what a neat place to race too.

I think you ran an excellent race. Congrats on placing 3rd in your age group, very well done.

It seems like a great race to me. I had to laugh at your comment that finally one volunteer was right about the last hill :)

ugh, I hate it when you hear the wrong thing durning a run. Congrats though on a great race! And how fun that you got to hang out with the blog girls!

You did awesome!!!! I am super impressed. It was great meeting you. I'm hoping to do Vermont City next year!

Congrats ajh you did awesome! Wow, an AG award on a half-marathon is great! I have a feeling someone may be feeling a little less bleh about running ;) :)

Sounds like a great experience! Congrats on your placing. I think I would have called someone to get my maple syrup sent to me! That medal is great!

Your students are cute!
A very good race for everything: the podium in your a.g., the position overall, the negative split and the last fastest mile. Congrats a lot.
Beautiful medal ... and many pictures not to forget this great day!

Congratulations on a great race! I can see where Emily gets her speed from :) I would have tried to go back and get my maple syrup though!

Gahhh those comments are the worst! I'm sure they mean well, but they must NOT be runners to be saying things like that!!

Look at those steady and strong splits! Congrats!!!

Congratulations on a a good race! I heard it was very well organized. The medal does look great!

You ran a great race and a really good time, congratulations! Looks like a really great event.

Great job, especially when your heart hasn't been hopelessly devoted to running this summer! The kids are so funny. One of my former students' mom is running the Portland marathon coming up, so we bonded last year over my marathon. Yesterday, while I was telling my kiddos about my race and showing them pictures, they of course asked if I won. Hopefully if nothing else I'm a good model that you don't have to win to enjoy yourself. :) That said, it would be nice to be able to tell them "yes!" some day.

Thank goodness for pre-race coffee! I know Darlene was your hero that morning. :)

Yay for 3rd place on a hilly course! Like your skirt!

Congrats on the 3rd place! Great running. I love that medal too, really different.

those are some gorgeous mile splits! congrats!

congrats on placing in your age group and for an overall great race! this race is on my bucket list because i have family in schroon lake and the surrounding areas and one of my aunts helps with the race :)

Congrats! What an awesome job! Love the medal too.

I'm so happy I read this. Congrats on such a great race! I've heard the course for this race is tough, so kudos to you for maintaining such a great pace! I absolutely hate when volunteers (God Bless them) say "Last hill, all downhill from here!" because that's usually not that case and even if it is, I'm still racing! It's still tough!

Congratulations on an awesome race and the AG award! I love the fact that they gave out maple syrup as awards! That is also a sweet medal!