My Weekend Away - Pre Race (lots of pics - flooding too)

First one colleague couldn't come. She broke her toe a week ago and although that was much better while walking "funny" because of the toe she "popped" something and could not walk at all.  So she was not able to come :( but we kept her in the loop all weekend.

Then it took us much longer then planned because you couldn't get there from here.  There are still a lot of roads in Vermont closed because of Irene. So our trip was longer both ways. I was AMAZED at the destruction 6 weeks later.  So much has been repaired and cleaned up but so much hasn't.  I did get some pictures but  we were in only a few of the places that got destroyed.  One picture I didn't get was a huge iron bridge that had been swept along and was on the shore of what would have been the river that day.  In one small area I saw 12 cars/trucks.  I got pictures of those because they were the most obvious to see.  My heart breaks for all the people whose lives were drastically changed through this. 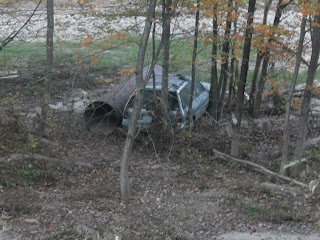 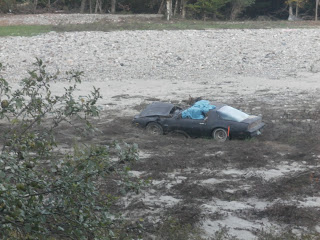 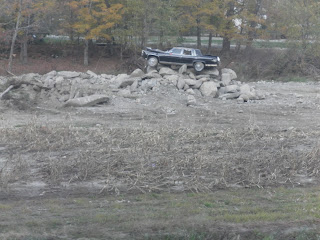 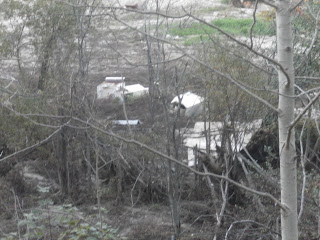 Appliances washed out of peoples' homes 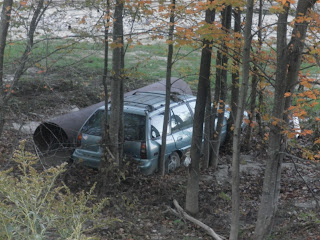 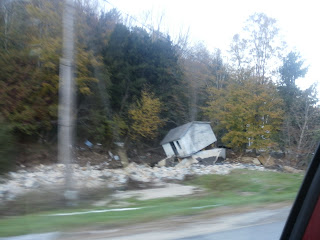 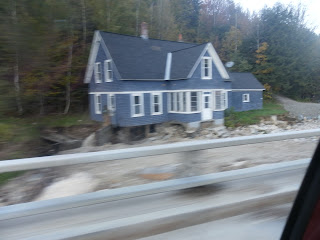 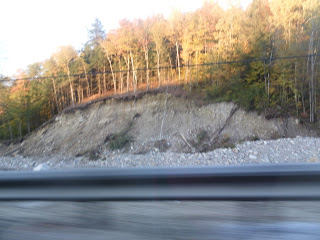 Once we got to Maine on Saturday we shopped!  I could not get over how many people were there. It was like it was the middle of the summer. But it is a 3 day weekend for most of the country (not me) and it was gorgeous out!  I spent plenty but could have done worse.  First we went to Eddie Bauer where I scored some pants.  Then  my next score was at Columbia. Can I say I love Columbia outlets?  I always always find some good buys there I love. I bought a hoodie that my friend said was me and I totally agreed. I also got a raincoat that I love.  I got nothing at Nike. Well, not nothing. I got shoes for my son that I sent a picture of first to make sure he liked them.  Our last stop was Kittery Trading Post where I resisted so much stuff - truly and got my husband one small thing.
Then we went to the beach where once again it was just like the middle of summer. Perhaps there weren't quite as many people swimming but there were some but the beach itself was crowded. We went to the lighthouse which is always a special place. I took more photos although I must have hundreds.  It was also crowded with people including a wedding.  Then we checked in before heading out for the chowdah and lobster roll.  It did not disappoint! 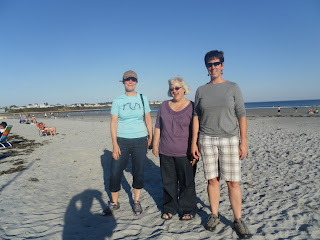 Heading to the water 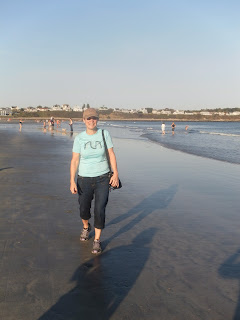 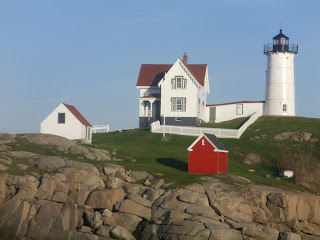 Have so many pictures of this but always take more 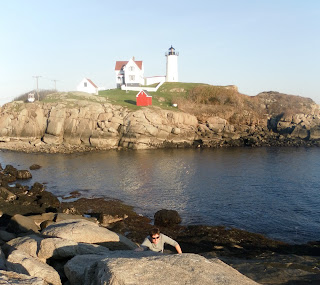 S was seriously fun all weekend. 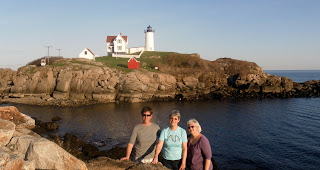 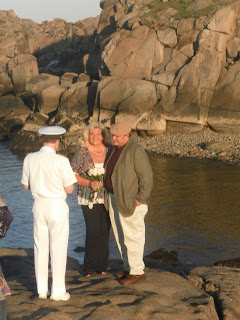 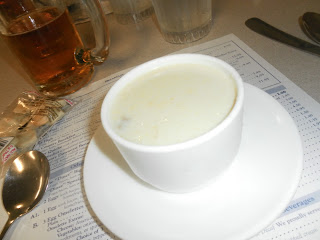 My clam chowder with a pumpkin ale in the background 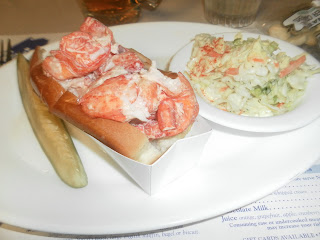 Could NOT have been better 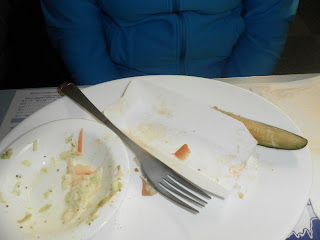 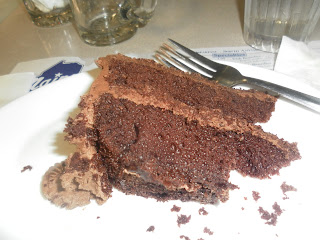 But there's always room for dessert
Back to the hotel still not having decided how I will execute the race!
Posted by ajh at 9:56 PM

Your pictures are so beautiful. What a fun weekend away! Those flooding pictures...it's just so astonishing to see the destruction.

Looks like a good weekend so far - hope you did not leave that cake on the plate! ;-)

Oh wow, that picture of the lighthouse is fabulous. No lighthouses in Colorado! I love them. What a nice weekend you had...you always make me laugh with your shopping :).

I love that lighthouse, I can totally understand you never get tired of this.

Amazing how much destruction there is still to see after Irene.

That cake is the right fuel for a long distance run.
Beautiful lighthouse, as a former sailor I love them.
In the picture of the wedding I see a Navy Uniform, don't I?

I need to visit your neck of the woods. Your pictures are always so beautiful!

Looks like so much fun so far...don't even need to race LOL

those first several photos - wow - the destruction is so evident.

Had to giggle at your lighthouse picture! We do the same thing whenever we go to Niagara Falls (usually once or twice a year). Nothing has changed and yet we always need one or two (or seven) pictures...

Hard to believe that there is still so much cleanup to be done after Irene! So sad!

I loved your photos... sounds like a fun weekend!

The flooding is unbelievable...very sad.
...the food looks awesome....

I'm lucky...I do have lots of friends to race with, and I can really appreciate it bc it was a lot different for my first 8 or so months of racing. I actually have no races on the schedule until Nov. 20, so I'm going to make a real effort to actually train for that sucker. I ran 5 mi of trails today and was already wondering what the heck makes me think I can do 30k of trails in a month.

Sounds like you had a really great time. Can't believe all those cars and the other damage. I love the photos at the beach.

Wow, the devastation that Irene left is overwhelming; I'm feel for those poor people.

On the flip side, the lighthouse photos are BEAUTIFUL.

Was just in Southern Vermont this weekend and couldn't believe the damage.. Roads washed out, homes ruined.. reminder of how lucky I am!! Glad you were able to enjoy the weather in Maine!

The beach pics are gorgeous! The post-flooding ones are tough. Unfortunately it takes too long for things to look normal again after a disaster. :-/

those pics of the devastation are heart wrenching :(