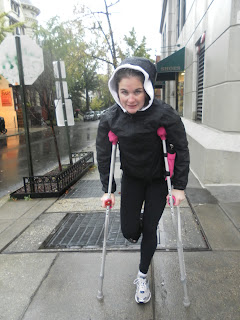 Saturday was a work day for sure.  Sadly it was interrupted by a visit to Urgent Care.  Emily has an ear infection from being in the pool which of course she can no longer do.  When it rains it pours as they say.  Which it was doing yesterday.  And by the way do you realize how much it sucks in general to be on crutches?  Try it in the rain, in the cold.  I wanted super human powers so I could carry Emily place to place or beam her there.  Unfortunately she had to just slog along on her own.  By suppertime we were defeated with the whole crutch transportation thing and I just went and picked up some pizza.  It was also the first time I had my first real coffee of the day which is also an indicator of how bad the weather was which sounds strange but I just couldn't deal with one more thing and getting coffee was one more thing. Okay I will move on from the pity part of the post.

We did get a lot done yesterday but there is still much to do.  We are currently waiting for a friend with a car to take us to Target.

Well, maybe a bit more of a pity party.

Yesterday mid morning Em went to Pilates and I went for a run.  When she first opened the door and swore exclaimed over the weather I suggested we not go.  It was so cold and pouring. I don't mind running in the rain  but I like to be home immediately after so I can jump in the shower.  But I sucked it up (Em is the one on crutches and I am the one whining?) and off we went. I left her off at Pilates and took off running. I ran to the Mall, along the Potomac to the Lincoln Memorial.  I had spent about half the time I had so I turned around and headed back. I didn't want any worries about being lost so it was an out and back run for sure.  After I picked Em up we headed to get lunch (I am soaking wet but I am a trooper).  Once out on crutches you do what you need to before heading home.  Then it became obvious that Urgent Care needed to be a stop and sooner rather than later.  The good thing about ear aches is you can get a prescription and it starts feeling better much sooner than a broken foot.  But to get that prescription it involves more trudging around in the bad weather.  I was worried Em was going to slip.  While at the drug store we may have gotten pretzel M+Ms, Halloween pumpkins and some chocolate/peanut butter candy.

Did I mention that for some of these errands I was soaked from my run?  And it wasn't exactly balmy?  Yeah.  I did run home and shower and change (only to get wet again......but not as wet) while Em was actually in Urgent Care.  I have heard it is cold out today but at least it isn't raining.

I did enjoy my run yesterday - a great deal in fact - but the whole after thing....not so much. 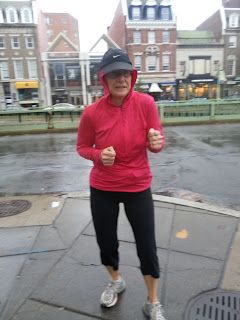 Oh, man, Emily is probably trying to feel like Job! I bet it was pretty awful to do all that running around soaked. I had my first chilly + rainy run in almost year on Wednesday (what can I say...I'm a wimp :D), and I was VERY glad to have dry clothes to change into for my sit in the gym time.

Oh, so sorry! And yes, it is hard to imagine what it is like to be on crutches, all the things we take for granted become real issues. Hope you get good news from the doc. Em is lucky to have her mom there with her. Best medicine.

cold..rain - ugh! you are are trooper and a great mom !

You're a great Mom Andrea.

My husband had to use crutches for 3 months, as a child I have to use them for 6 weeks. I know how hard it is but the longer you use them, the more "natural" it becomes.

I did the crutches thing a few years back and was all on my own. Emily is so lucky you came to help out. It is so hard to do things, like carry your cup of tea from the kitchen to the den, when you have no hands to help! You are a wonderful mom!

Double mom points for you! Hope Emily's ear and foot heal soon.
It's raining here too. I'm still trying to motivate myself for a run, hee, hee.
Cheers and happy mother/daughter time,

I really feel for poor Emily. An ear infection on top of the broken foot just seems way too much. I'm so glad she had you with her over such a sucky weekend.

Must. Always. Bring. Dry. Clothes. In. The. Car. Post. Run. Especially. When. Cold. Outside. Always. Then you can do a Clark Kent in the car post-run. No fun, at all, being wet and cold after a decent run. At least you both assuaged your misery with pizza, pretzel M&M's, and chocolate/peanut butter candy. We hope Em can not let these set-backs get her too down. Goes for Mom, too!

oh man i hate being cold and wet! and poor em! hope she can catch a break soon - geeze.

Poor Emily. Hope she heals soon! Nice job taking care of her this weekend.
You are awesome to run through that weather yesterday! We had sleet and snow up at my house. I was SO glad the MCM was today and not yesterday. This morning it started out cold but I warmed up the perfect amount during the race.

YES, you are a mom! We never stop being moms and you were a total trooper!
Thank you for your kind words and I think Em is very, very blessed :) !

You are definitely a trooper!
I believe Emily was glad and happy to have you around. Mommas are the best!!!

My bad! You'll have to forgive we mountain folk who are not familiar with the East's City Slicker public transportation. We forgot that's how it works in DC! Makes it a little difficult to bring dry clothes, huh?
:-) And you may have looked a bit suspicious running around with a loaded backpack.......

BRRR! So sorry to hear about all the struggles you guys have been having. I sure hope things look brighter very soon!

Again, you are an awesome mom and a big help to Emily!