The Race That Almost Wasn't 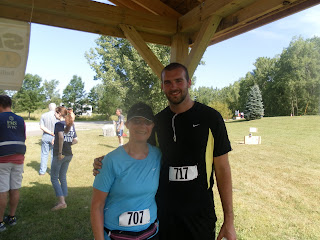 Yes, my hat is on crooked. I'm really stylin!

Usually I figure out the distance to a race, how long it will take and plan accordingly.  This time I thought I knew how long I needed  (based on Hubby's prediction - can I blame him?) and left 20 minutes later than planned.  I had to pick up Jameson and knew that time was short. I drove faster than a speeding bullet faster than I should have but of course still within the law.  I did not know exactly how to get there but there is really only one main road through the islands so didn't think I could go too wrong.

The wrong part was not realizing


Once there I saw a sign for St. Anne's Shrine where the race turn around was.  Do I turn and go that way or go straight?  I had run in before leaving and looked at the race site and had an idea of the set up.  I went straight and found School Street which was where we needed to be.  (If I had gone to the Shrine the road was closed for the race and we would not have made it.)  As I drove up to the Rec Park people were in line about to start.   A man asked if we  were going through and I said no we wanted to race.  He quickly had us park our car and run to get our numbers.  I had registered online so it was quick.  No one seemed grumpy that they waited for us or they hid it well.  One more minute and I don't think we would have made the start.
Here are the things I didn't do:
I ALWAYS pee several times before a race.  I had had to go for several miles.  I drank coffee on the way. Oh well, maybe it helped me run faster.
I had my camera but I didn't take any pics until after.  It is a flat area but there were hills!  I ran the first mile quite fast for me and once when I looked down I saw 7:48 on my Garmin!  Man I thought I had a PR in the bag. But I did not hold my first mile pace.  In the second mile I noticed how hot it was.  All of a sudden it felt like a blast furnace. Also in the  second mile I had to stop to tie my shoe.  Notice the second thing I didn't do.  I saw someone walking in a sweatshirt and wondered seriously about their state of mind.  But not much time to dwell on that I needed to keep sprinting trudging along.  I did look at the course as it was beautiful.  The street it was on was pretty by itself but the lake beside the street was breathtaking. All but the first/last half mile was along the lake.  The day itself was gorgeous (as was the ride up but I was too nervous about getting there to enjoy it.)  This may be the prettiest race I have ever done.  The last half mile was mostly uphill although there was some weird alien thing going on as we never ran down a hill when we began.  It took forever and my last .17 was not fast. I write .17 as the race was 3.17 not 3.1!  I heard many people talking about it. Not in a disgusted way but justifying our times of course! 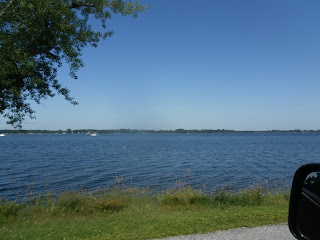 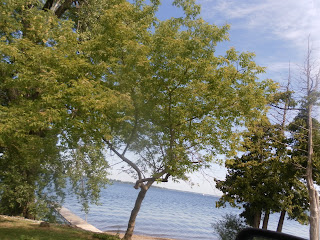 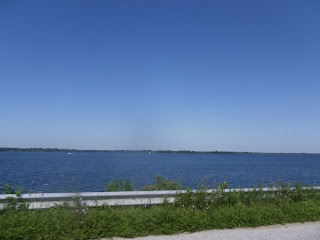 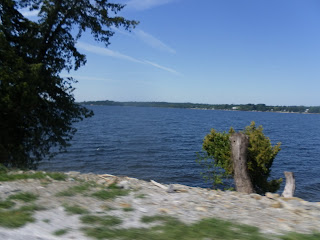 I took these after the race from the car as I was driving
Sorry for lack of effort! These pictures really don't show
the beauty of the race.
I had met Jameson on the course and he was far ahead of me and did quite well with a PR for the year.  He was first in his age group. I was second.  There weren't a lot of racers but hey. We'll take it.
I was surprise by where all the participants were from.  There were four from another country.  Okay it was Quebec, Canada which you can spit and reach from here but still.  There were people from New York, New Jersey and New Hampshire. It is a reasonable guess that they were vacationing here and did not drive this far for a 5K.
So stats:
2/3 in age group.
21/34 oveall
5/15 women (a few were young kids but I still like the sound of it)
Mile 1: 8:34
Mile 2: 9:07
Mile 3: 9:30
.17 9:41
Not exactly a negative split race
Overall pace: 9:06 (thank goodness for that first mile or maybe it was my undoing, who knows)
Pros of this race:
The sheer beauty of the course
Friendly participants even when you arrive late
Watermelon after the race
Print out of results before they give before you leave (have you ever seen this before?)
Cheap entry fee (10)
Road closed - no traffic
Small number of participants - quick to figure out placement
Cons of this race:
None that I can think of quickly
I have talked before on here about how envious I can be when I see people running and now biking when I am unable to.  Today, driving home through these unbelievably beautiful islands surrounded by deep blue water on a sunny day I saw scores of groups of cyclists.  I had envy like I have never had it before. Never mind that I rode south of here just the other day.  Never mind that I had had a beautiful race with my son.  Never mind that I am likely to be back up here riding again in July. At this present moment the green eyed monster was rearing it's ugly head!
Good News/Bad News/Good News
I won a creemee/the place was closed/I'll have to  go back
A shout out to my son who never got grumpy when it looked like we weren't going to make it.  I got him up early to race and no making me feel badly that it might be for nothing.  (But we would have at least taken a run there.)

There was also so much evidence of the flooding all over the place.  There is a bridge that connects Isle La Motte to the other islands and there was major damage there. It was evident they put a lot of effort into just keeping it open throughout the flooding. 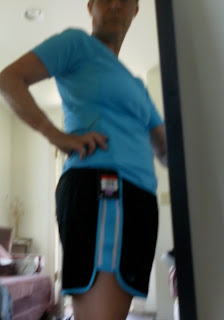 More stylin!  I do promise you
it was inside the shorts.
Posted by ajh at 9:54 AM

Great job on the race and the AG placing!

I don't know that I'd make it through a 5K if I didn't get to pee beforehand!

sounds like a great run. i might have just peed myself while running. i have been to many tris and a few runs where they print the times right away. fun, cept i can't read the small print lately.....ahhhh age.

Congrats on the results of this beautiful race and congrats to Jameson too.

I had to laugh that you have to pee several times before a race. We could be sisters because I do that too :)

I feel ya on the peeing part. I usually go 2 or 3 times in the morning before the race.

Placing in your AG matters even if there were only 3 of you :-)

Congrats for your beautiful race!

What a stressful start to your race. And not being able to pee!! That is my worst nightmare. Well done!

Great story :) Glad you made it! Congrats to both you and Jameson for the AG awards!

Wonderful job! Such a great pace, good for you. And watermelon on a hot day and after a hot race is so refreshing!

Great pictures, and great job at the race, especially with everything that went wrong!

Congratulations! Great race with all the stress at the start. I sometimes arrive geeky early for races. I hate being late and worried if I'll be in time or not. So well done to you!

Great race - sometimes rushing makes you not worry about trivial stuff and just get to racing!!! Looks really nice with all the water surrounding you. You can take more pictures when you go back to bike it :)

Oh, and congrats on the race! That's saying something if you thought this was the prettiest race course. You seem to race and train in some pretty spectacular places.

You were stylin'!! I hope you cut the tags out before you wear the shorts again. Congrats on another race! It looks like a beautiful place.

You are so AWESOME!! I am totally cracking up at the tag inside your shorts :)

I hate when I can't 'pee' before a race. That does make me runner faster or at least it seems that way!

Oh my gosh, I would have been so flustered! Glad you were able to make it just in time and pull it off - not the best way to start a race! Great scenery, though!!

Too funny! But glad everything went well in the end. Hope those tags didn't chafe you! Guess that's why "they" say to not wear new clothes on race day:)

I once ran about 10 miles of an HM havign to pee. I can't say it made me any faster!

Congrats on the race, even though it was hectic!

I am obsessively early...it drives my hubs nuts.
But then again I pee about .... a hundred times before any race...

Congrats on your AG award. Looks like a beautiful place to race.

Way to overcome the stress of rushing to the start and pulling out an AG place. Cannot believe you can find $10 races. Here I swear the cheapest 5k is at least $30.

Awesome job! You handled the pre-race stress well and still ended up with an AG win! Way to go!

$10 for a race is super cheap! The cheapest race I've done so far this year has been $15 (River Rat 5K) with the exception of the Get Lucky 7K which I did for free because I'm a Team Ortho volunteer.

Sounds like an awesome race, even if you can't pee beforehand!