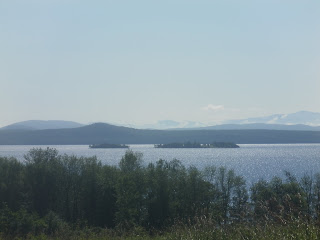 You come over the brow of  a hill and there it is,
Lake Champlain in all it's glory.
Yes, I biked 40 miles today. I am very impressed with myself (32 yesterday) and even more in awe of those of you who crank out 50 or 100 at the drop of a hat.  But I will tell you  50 is mine for sure  this summer!

I did the same ride I did last week in South Hero/Grand Isle, Vermont.  I am so amazed at what a treasure these islands are and they are NOT that far- totally worth the drive -especially if you have a hot new car. 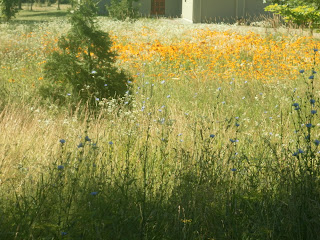 The lake isn't the only thing to look at.

I didn't take as many pics today as I had just done most of the ride but did take a few. (Surprised? Not!) I rode alone again which I actually like just fine. I like rides with my friends but I also enjoy doing things alone - at my own pace with my own agenda. It's good to be queen.  So I set off down Route 2 noticing some views of the lake I had missed last time. Then I turned off on East Shore Road which has got to be one of the nicest roads in the world for biking.  I was once again grinning from ear to ear and soaking in the pure wonderfulness of the day.  It wasn't long before a man and a woman passed me.  Eventually we stopped at the same place to take a picture. They were from Quebec. I don't think the woman spoke English or she was very unfriendly but I don't think that was the case. The man and I exclaimed over the sheer beauty of the spot we were in. Glorious. 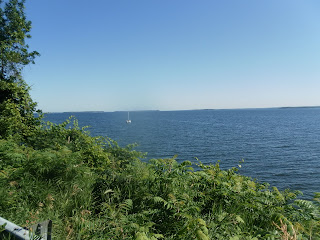 This is the spot the bikers from Quebec and I stopped
to admire the view. 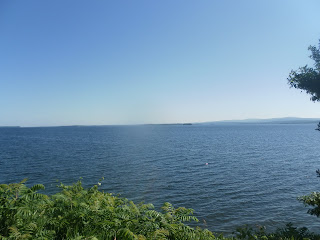 Then I continued and started to follow the map again when I noticed that East Shore Road continued along the lake  but the road I was supposed to take did not. I studied the map and decided I couldn't get too lost so I took East Shore Road.  My Canadian friends who were also using a map went the other way so that was the last I saw of them.  This was an excellent choice as the road/views continued to be completely amazing.  Eventually I came to road construction (from the flooding) that was a bit tricky but I got by.  When I got out to Route 2 (we'll call it the Grand Isle interstate) I thought I knew which way to go but wasn't 100% sure.  An older couple (very cute) came up by me and helped me out.  I could not believe the astounding views I got even from Route 2. I took a picture but it doesn't show it well at all. 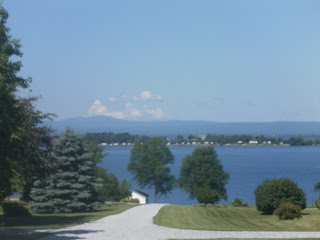 Looking from Route 2 towards New York.  The nice man
who had given me directions stopped to tell me not to
turn here, it was a private road. I assured him I was just
taking a picture.

Then I was on West Shore Road which is nice but I definitely prefer the East and the Vermont views as opposed to the New York views. 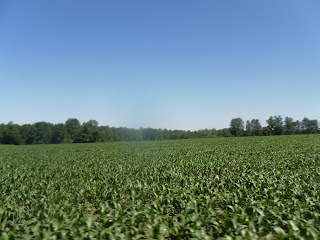 I actually took this picture for my husband who is always
interested in corn fields and how the corn is doing. Much of
the corn around Vermont doesn't look good due to all the
rain this spring. This was one of the better fields I
have seen. 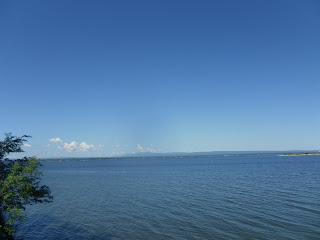 This is a section I missed last time.

I continued to the ferry and once again went to New York. 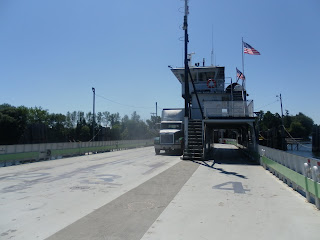 There is something kind of powerful about being the first
one allowed on the ferry, even before the big trucks!


I have been very lucky to get right on the ferry every time I have taken it.  Once in New York I was determined to find the right way as I totally screwed it up last week.  The road back to the ferry - about 3 miles - was all along the lake and last week I couldn't find it. 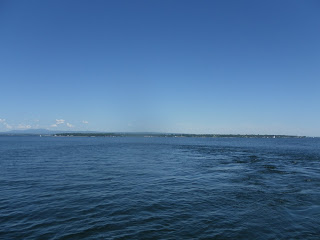 This is the section  I missed on the peninsula in New
York last time.

Once back on the Vermont side I also needed to not get lost again.  I did it fine but I have concluded that although nice the South Hero part could be cut out. I am trying to figure out how to make my running group happy with this ride.  (Can you imagine needing to be persuaded?) Some don't like dirt roads, some don't like to go too far, and some want to go farther. That would be me. )  I think I have figured out a route to satisfy all.  It could be shortened or extended and there will be no dirt. We already have a route for next week so I am proposing this for two weeks.

As I got back toward my car I was going to be at 37 miles. I could not be this close to 40 again and not seal the deal.  I really didn't think I had another 3 miles in me as I was pretty hot and tired by this time. BUT I DID IT.  I am feeling pretty happy with myself and my day!  This is a recent PR. The farthest I have ever gone is 43 miles but that was several years ago.

Sunday I was going to race the Stowe 8 Miler which I love. It is a loop and it is scenic. I asked my son if he wanted to run it and he said no.  Then I was looking for some August races and I discovered a race this Saturday in Isle La Motte, another Champlain island.  Well, that yelled out to me to come do it.  Jameson said yes to this one so I will be racing with my son, a new race, in a gorgeous spot. And I can do some eyeballing of some new bike routes.

And I have done some running too.  I had a great pace run on Monday and a tempo run on Wednesday with a not great at all run on Tuesday. I decided today was going to be only biking and tomorrow I will rest before my race. And Sunday I am going to run with T. We have not run together in two months!  The best part of not doing the Stowe race will be running with T.

I hope you are all having wonderful days!
Posted by ajh at 9:04 PM

beaut pics as usual!
I need to get a more comfy bike seat to do that kind of riding. 8/
Have fun at the race..!

I've been mostly doing shop rides in evenings and a couple road races, while my long rides have been on my mountain bike (long time, not so much long mileage). We have a great local organization that holds organized rides with a variety of distances. They're marked on the roads, SAG support is provided, and they have set water stops with water provided. There's just something about riding with a group.

The only other time I was in Minneapolis it was freakishly hot. Maybe it's me. And yes, we had clothes on...sports bra and shorts. It's a little humiliating, especially next to Jeff's barbie doll cousins, but those muddy shirts hang and weigh a ton.

I know I've told you this about 18 times before, but you live in a BEAUTIFUL part of the country! I LOVE LOOKING AT YOUR PICTURES!

Keep up the great work! You are inspiring!

40 miles! Fan-freakin-tastic!! I could probably bust out 40 miles, too, with those gorgeous views.

Good luck with your race this weekend - so much fun to be running it with your son. And 50 miles? I have no doubts at all. You can do it!

50 will be yours in no time! Awesome ride, and once again, your pictures are always so beautiful. :)

Whoa - good for you! Great pics, too!
Have a great time racing with your son this weekend!

Comgrats for your 40 miles biking! I'm you'll reach your goal this summer! The photos show that you go biking through wonderful environs :) Lake Champlain looks really beautiful!
Good luck with your race this weekend!

Wow, you are becoming a hard core biker, well done! The 50 will be very soon for sure. With scenery like that I understand why you enjoy it so much, great!

Great job on your long 40 mile ride. Nice photos too, you have such a pretty area to explore by bike. :-)

Great job on your long 40 mile ride. Nice photos too, you have such a pretty area to explore by bike. :-)

Congratulations on a great long ride! Nothing feels so great as a nice beautiful day in the saddle.

40 miles - nice job!!! I want to come stay with you and ride all the time in that beautiful scenery :)

Have fun at the race with your son and your other run with T.

Woo hoo! It only gets better!

Wow, congrats on the mileage!!

AMAZING pictures of an amazing ride!! WOOT! What a grand day!

Great pics. Have fun at the race. I am jealous sniff, sniff.

2 days in a row on the bike with a high mileage, congrats!
Good luck on the race on sunday, the scenic loops are the best.
Beautiful pictures; biking and taking pictures is a great idea, so you don't get bored and have wonderful memories.

I nominated you for the fun Q&A that's going around!! Can't wait to see your questions and answers!

Well done on 40 miles! Way to push it when you were just 3 away from the milestone. 50 will be yours for sure!!

I can't wait until I can say I biked that far!! I am realizing that while running is my love, biking offers up a lot of neat things like HELLO look how much you saw in a ride!

Great job!!! So very jealous of Vermont in the summer.

Ooohwee 40miles!! Way to go! And 32 the day before? Yikes. My padded shorts feel the pain for you ;) I can barely go 20miles right now before getting sore.

What I said, in a nutshell, is that living in Oregon for most of my life, I never think of the fact that people bike from Vermont to NY. I hear NY and picture Times Square and the Statue of Liberty!