A Sweet Sweet Bike Ride and a not so sweet run 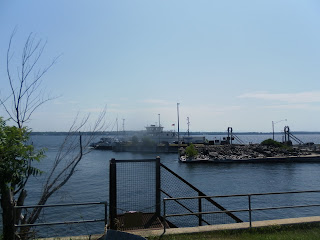 Looking back on the ferry from the New York Side

I asked for and received two books for Christmas with bicycle routes in Vermont.  Today I used this one to do what sounded like a very promising ride. It said there were lots of dirt roads and the women I have been riding with on Wednesdays don't like dirt roads.  No one could ride this week so it seemed like a good week to try this route.  I only had two days as possibilities and today the weather was awesome.  So I was up early and off to Grand Isle, a county in Vermont that is all islands in the middle of Lake Champlain in the northern part of our state. I don't go there very often and it isn't that far beyond Burlington and is really a treasure.  I went alone which doesn't bother me at all.  I discovered a long time ago that if I wanted to do something it didn't always jive with others desires or schedules so just go for it.

I rode in the southern part so I have a lot left to explore.

I got there around 9 and parked my car at the town offices in South Hero.  Where I was going to park was a cause of some anxiety for me.  I didn't want to have my car towed or dinged and I wanted it on the bike route.  I asked the town clerk if this would be okay and she said absolutely with a smile on her face. Good start.

I had to ride on US 2 for a few miles which is the main route through the islands and has the most traffic.  There is a good shoulder and before I knew it I was headed for the East Shore.  Gorgeous. I was now in the town of Grand Isle and was biking along with stunning view after stunning view. I know I was biking with an foolish grin on my face but what a day. 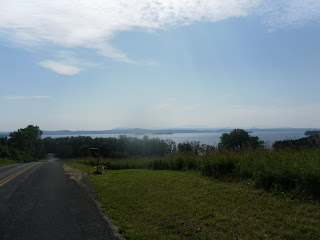 I turned off US 2 to be greeted by this view,
a sign of things to come. 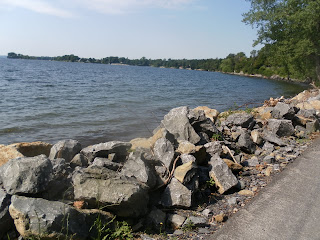 This was one of many roads where there was evidence
of work that had been done when Lake Champlain
was several feet above flood stage. 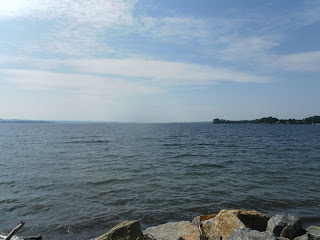 I continued through Grand Isle and it was all stunning.  One way to make this ride longer was to take the ferry to New York State and do a short ride there.  Of course I was going to do this.  It was such a gorgeous day for a ferry ride.  The ride itself wasn't very long, maybe about 20 minutes.  I was amazed at the number of vehicles including 3 tractor trailers.  Once in New York there was a peninsula to ride on to add about 6 miles.  I didn't quite go on the intended route. I still don't know what I did wrong. I am sure I will do this ride again and hopefully can figure it out. 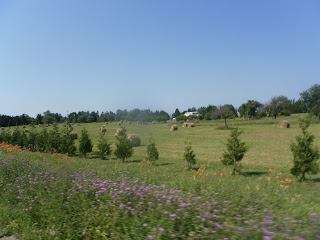 On the way to the ferry.
When I was riding to the ferry I could see probably 30 geese on both sides of the road with SEVERAL babies.  I saw cars get through them but wondered how I would accomplish it.  After one car zoomed past the geese on the right scattered.  I zoomed as much as I could and did get by.  I do not like geese.
My other animal thought was about snakes.  They shouldn't be on islands should they? 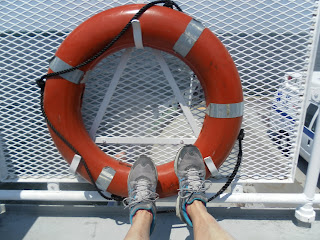 On the way back! 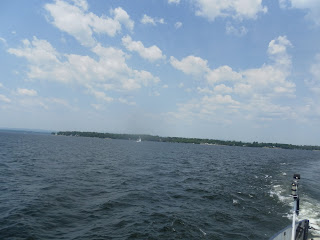 Looking back towards New York
Once back in Vermont I headed toward South Hero.  All of the directions had been very clear but now they were a little less so.  I was never quite sure if I was on the right road and was pretty much guessing which way to go. I was on an island and it was a small island so I was not too worried.  Soon enough I could hear traffic on Route Two. Once there I didn't know if I should go north or south. I chose north but before too long I came upon a really tacky July 4 decoration that I had seen earlier so I knew I needed to turn around. I arrived back in South Hero and saw my car (all safe) and continued on.  I wanted to see where I went wrong. I added some miles in but before too long I turned around as I knew I might run so thought I should head for my car. I ended up riding 36 miles, the highest this year and there aren't many times (1 0r 2) when I have ever gone farther. Once at my car I drank a bunch of water, ate a banana, some fig newtons and rested for a bit. Then I drove the route until I found where I made the mistake.  If I ride it again I will know what to do. I actually think I made the route shorter which if you know me at all I would not do on purpose.  Once a goal is set I want to do it, not take short cuts.
I drove over the causeway which is the only road onto the islands.  This was shored up again and again during the flood to keep a way open for people to get on and off the island.  I drove to the fishing access on the other side and went for a run.  My Garmin stopped working (but it had done well on the bike ride) but I had checked the mileage as I was driving. I ran 2 over and turned around to come back. I must admit I started feeling not so great.  The heat?  Lack of enough  water?  Lack of enough to eat? All 3?  When I got to the other side I met a friend of mine riding her bike.  I knew she was heading up to a campground on Grand Isle today so it wasn't a total shock but still not that likely a meet up. She lives in the same town I do and recognized my running style!  I didn't talk too long as I really started feeling crummy. Further evidence - I walked the rest of the way to my car!  Once there I drank some chocolate milk and headed into Burlington to get my front brake repaired where I had bought the bike. 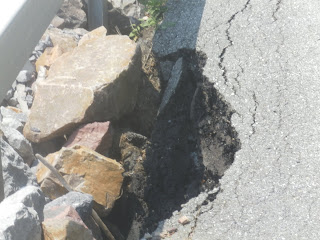 You can still see evidence of some of the damage.
The picture below shows where the water is now.
It is hard to see the depth. It is much lower
than the road. Hard to imagine
such a huge lake rising so much. 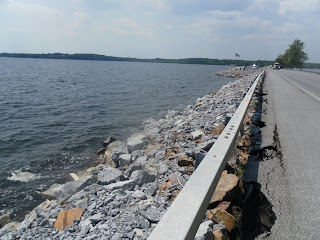 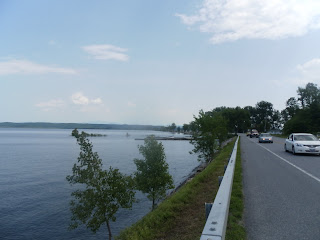 Looking down the Causeway on the way back.
In spite of a not so stellar run, A GREAT DAY!
Don't forget to vote for Emily.

Gorgeous bike ride! Too bad the run was sucky, but you toughed through it. :)

You had a beautiful day for your ride. Pity the run wasn't so great.

Too bad about your run, but the bike ride sounds absolutely awesome! And you were right to be careful about those geese - I am really apprehensive of them too - especially when they have babies.

Yea... the good and the bad usually come together. But sounds like you made the best of it!

What an interesting and beautiful workout. I like driving to places sometimes for a nice trail run. It just adds something interesting. I'm sure you were just out long and that got to you. Luckily you had the chocolate milk to drink. I sometimes drink it in the middle of a run as well and it does wonders.

What a beautiful place to ride...I definitely hope to ride a few nice bike trails this summer.

Stunning place to ride - and such a long ride you got in. That is great! Have a great week!

Don't worry about the crappy run, you did awesome on the bike ride.

I have had a few rough runs of late...humidity and I don't get along. I have also seen a TON of geese lately and they are mean. Period.
Re. my new car...I went with the new Altima. Really wanted the Rogue but the deal on the Altima won out...

What a great ride!

What a great day!! I'm like you - I'll totally go off and do things by myself. My husband doesn't like to do a lot of the things I do, so I FINALLY figured out...just go and do them by yourself and have fun, Julie. If I can't find a friend, I'm cool going solo.

Sounds like a great day to ride, except for the geese. They are all over the place out here on the roads too.

Wow, there's Tara...she's been so MIA on blogland lately!! Glad to see she's alive (I do see her regularly at the gym - ha).

You were biking in a very beautiful area! I like geese, but only at a distance.

I'm really tickled to hear I inspired you - the funny thing is, you often inspire me!

My bike ride to the gym is about 2.5 km, so it takes me about 10 minutes, and yes, I usually just go in my workout clothes, and then bike back in them and take my shower at home. Sometimes, if it's a bit chilly out, it is a little uncomfortable in the sweaty clothes, but I guess I kind of look at the bike ride as the warm up and the cool down.
How far is your gym from your house?

PS: on this post I managed to vote twice for Emily!

The half I signed up for is called the Parks Half Marathon in Maryland. It starts in Rockville and ends in Bethesda. If you were going to be visiting Emily that weekend you could run it too!