A Morning Run Before Heading Home 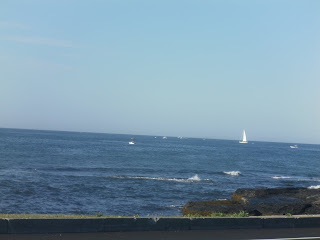 Sunday morning I was up early to have time for a run along the ocean before heading back to Vermont.

We went to a state park and H was going to sit and read while I ran - also appealing.  Reading next to the ocean or running.  Actually not  a totally easy choice.
This was going to be a shortish run with no hurrying whatsoever. I took lots of pictures and did lots of gawking. First I headed south where I had an awesome ocean view.  Part way into the run I realized I was on the biking side of the road, not the running.  I really have to think now about which I am doing, it is not automatic.  This run was full of many smells mostly the ocean (there is NO better smell) and flowers.   I ran as far as I could before the road wound back to town. I stopped to take more pictures of these beautiful flowers. 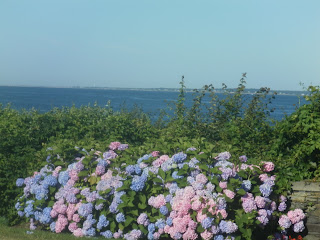 \
Soon after I turned around I found an empty bench and stopped and fooled around with the self timer on my camera. I didn't get great pictures but I had fun. 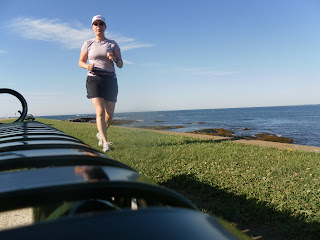 This is the first try, not too bad but the bench is a bit
too prominent. 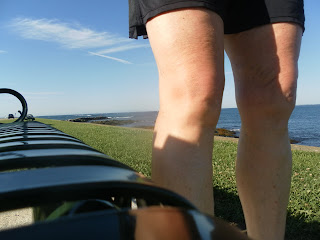 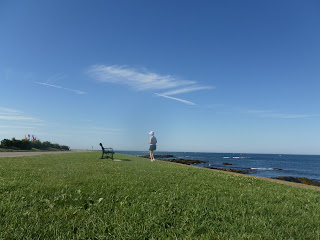 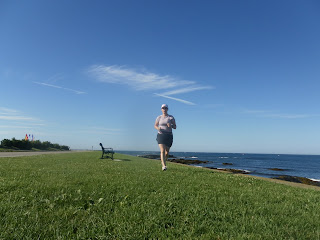 A bit far away. Oh well, I tried.
One thing I liked was that I met a lot of runners and tons of bikers. I definitely had envy and wished I had my bike!  It has been years since I have ridden next to the ocean.  When the kids were little we always vacationed in Maine and brought our bikes but that was many moons ago.  I got back to where we had parked and stopped to say hi to H and tell her I was just going by, I was not done. 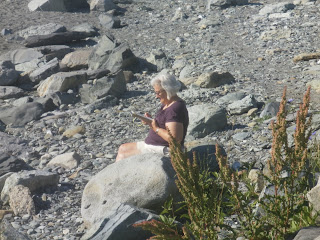 As I continued I was still running along the ocean.  I also was going by ponds, "houses", rocks.  I saw scuba divers in a few places, many many people out fishing, people walking their dogs...... There was a kite festival going on at the beach.  It was a great day to be outside enjoying life.  As I ran I certainly could tell I wasn't home. I don't run by houses like this in my town. 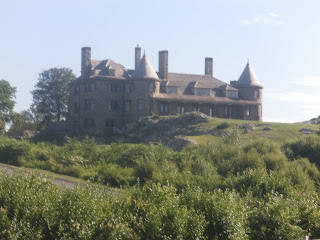 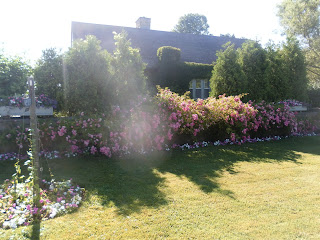 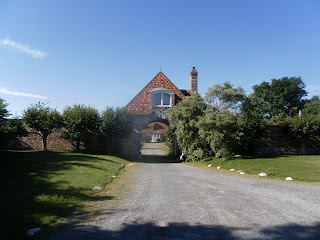 This may have been my favorite sight. I loved this gate house. It was so cute.  Wouldn't you love to be a kid playing in this?  Living in this?  The house behind looks just like the gate house from what I could see.  I couldn't be too noisy. 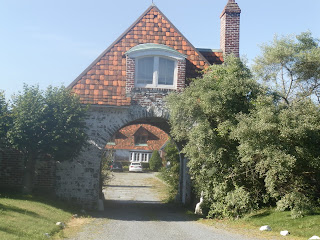 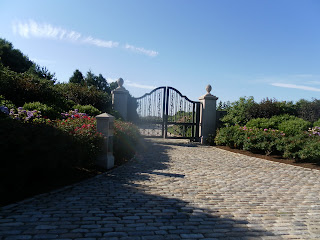 So now I was into looking at gates and this was the next one I liked. It was nothing
like the gate house but much nicer than some of the others I went by. 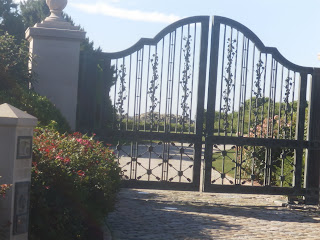 I kept running on always wanting to see what was around the next bend. I finally decided to turn around and head back.  There were even more people out enjoying this gorgeous summer day.
I ran out a fishing access road and went on these rocks. I must admit I "screamed" once as I thought I was about to step on a reptile but nope - a wire. 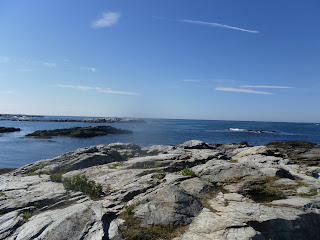 Then I got back to the car and it was time to stop.  I hated hated hated to stop as I don't know when I will be running on the ocean again.  But it was time. 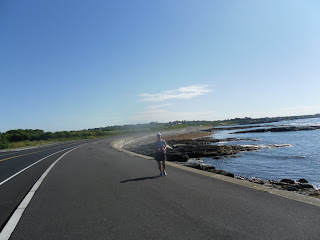 I love your pictures. I have a lot of self-timer pics like those! Hope you are back running by the ocean soon, but at least you have some lovely memories until then.

Great scenery. Makes you want to run every day!

I have had my fair share of self-timer bloopers! Looks like some great scenery - good choice to run. :)

I love running along the ocean too.

I love the pictures! I absolutely love to run by the ocean in the summer, and I get to do that very often!

Hey, you have a cute knee :) !
I loved the pictures you took, the houses are so cute and I loved the flowers. Even though we live by the sea, this coast line is completely different from ours. I just love it. Thanks for sharing!

It's so much fun exploring another area in another city in another country vicariously. It's all so pretty!

Well, now it is my life's ambition to own a gate house. Thanks for the pics. :) Looks like a really beautiful run, I wouldn't want to stop either!

You're right... choosing between reading and running would have been difficult. I doubt I would have read much; I likely would have stared out at the ocean. :)

I love the photos... what a beautiful area! And yes, that gate house is so cool. The kid in me totally loves it! :)

An absolutely gorgeous run! What a beautiful place to run, I can totally understand why you loved that run so much.

The hot chocolate 15k is going to be in DC on Dec. 3rd. An old friend and I might be running it. I guess I should decide soon. Here's the link. http://www.hotchocolate15k.com/dc/

Just catching up on your Rhode Island posts - from all your pictures it looks beautiful! Sounds like you had a good race in spite of the poor organization.
Have a safe trip home!

So beautiful... We are blessed to have such gorgeous land to explore (and the freedom to explore it - I'm realizing more so after reading a few books about life in otter countries!) the self-timer pics look great to me-always good to capture:) oh and I hurdle twigs and other snake-like objects ALLL the time. Better to be safe, right?

Such a beautiful area...love the photos! The self-timing ones made me smile :)

Beautiful photos. The ocean is BY FAR my favorite place to be during any season but especially summer.

Great self timer photos, I almost exclusively run without my camera or only with my iphone so I never get self timed photos.

I agree that gate (and house) were amazing.

I don't even know how to use the self timer on my camera...I'd probably end up with pics of my nostrils.

The Hydrangeas are gorgeous - you are so lucky out there to be able to grow them - they do not do well here in CO! Loving the ocean pictures, of course! And I play with my sell timer sometimes, too...makes it kinda fun to see if I can scramble and get in place before it goes off.

Glad you had a great vacation! :)