Biking an Errand And Memories Bad and Good

I have no race this weekend which feels a little strange. I could have found one but I was gone last weekend, I'm going to be gone next weekend and I decided some down time at home might be just the ticket.  I am also trying to get in some extra biking this week as I won't have much chance next week. I am working with my teammates to prep for the fall curriculum the first 3 days next week and then I head to DC.  Yeah!

Originally I had a route from my bike book picked out that I was going to try. It was the right distance and not too far to get to.  But I needed to go to Middlebury to run an errand and I had already been this week so I thought rather than drive it again I would bike it. Love getting things done while I am getting my workout in!  I made it a loop as much as I could and avoided heavy traffic areas.  I didn't get going as early as I would have liked to avoid some of the heat. (I ran first with T, went to recycling and ate breakfast. All necessary stuff!)

So I was off at about 9:30 sporting my new bike shirt that I got on sale.  My lovely son burst into laughter when he saw it as it is a Switchback shirt and the idea of me wearing a shirt that advertises a beer (quite a good one IMHO) is unusual  to say the least. My husband seemed rather surprised too.  But when I went to look at bike shirts and shorts I found out something.  Trying on bike clothes is not something to do when you are feeling a little fat as you will feel very fat before you are done.  All the shirts were on sale but oh so many of them did not fit me.  Or if they fit me I didn't like the feel of them. Ride for miles in something that doesn't feel good, no thank you.  I also liked the colors of the Switchback shirt. So I got it.  I won't be wearing it on my work commute but other than that it will do just fine. 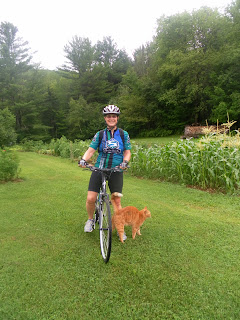 Before the ride
The ride down went very quickly.  It was cloudy for part of it - read not too hot - and just a delightful day.  I wasn't setting any speed records but was going a respectable speed.  I did notice all the poisonous parsnip which is along so many roadsides.  Not pleasant stuff at all.  A fall into it would result in horrible blisters and some pretty nasty scarring.  My town doesn't have too much because a real effort has been made to get rid of it but that is not the case in so many places. It is an invasive species that is just taking over.  Google it if you want to know more. 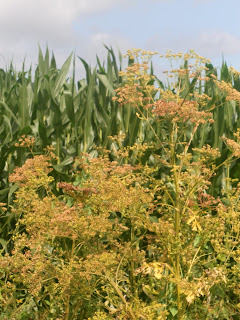 Lots of poisonous parsnip next to corn fields 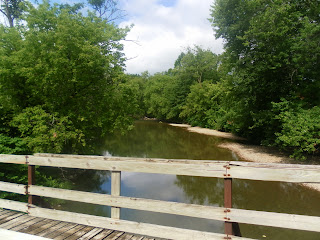 Time to turn and try a new road
When I got a little farther along and came to the bridge above I veered left onto a back road I am not familiar with.  But it avoided traffic and a killer hill. Win Win!
I have not ridden any of this route I took today in a long time  but when I lived in Middlebury and Bristol I took multiple routes through here.  I kept seeing different roads and reminded myself of all the great rides I have taken in the past. I need to branch out more and go on some of these.
The Pleasant Memory This Ride Gave Me
When I was in my 20s I got one of the best presents I have ever gotten, a speedometer for my bike.  There were no computers then, this looked like a car speedometer. It kept track of present speed and distance covered. I had been doing a fair amount of biking over the summer and my roommate gave me this.  I had never even thought about it but it was such a great gift. By mid August it was installed and I loved loved loved knowing how far I was going each ride I took.  Between the time I got the present and put my bike away  in the fall I put on 600 miles. I remember being very impressed with myself.  I am still extremely anal about distance covered. I remember making my own little biking log that summer to keep track of routes and distances.
The Unpleasant Memory This Ride Gave Me
I was telling my husband before I left today that when I lived in Bristol I rode to Middlebury a lot but an incident I had stopped me doing it.  I was riding home on a road that while not isolated was certainly not full of houses but very wooded.  Three motorcycles pulled up behind me - Harley Davidsons and the bikers were wearing those half helmets.  They followed right behind me at my speed for awhile making comments.  Then I asked them to get going and they told me sure and got right in front of me, going the speed I was going.  After awhile they took off but the rest of the ride I was sure everytime I went around a curve they would be waiting for me.  It could have been much worse, they only harrassed me and intimidated me. I don't know why I am using the word only as it was plenty.  I have not ridden that route again until today and it was before I had kids. Well before I had kids and both my kids are young adults.  I'm glad I got back out there and made this route mine again! 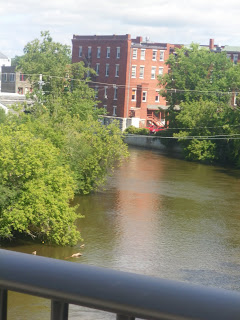 I crossed the bridge into Middlebury, went to the library, picked up my book,  (yes that was my errand, a real geek here) used the bathroom, filled my Ironman water bottle ( my daughter did the Ironman  you know) and headed back going on a different but equally pleasant route. 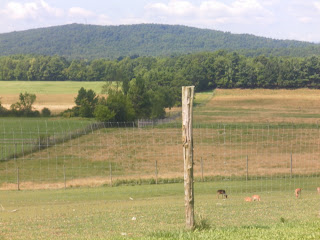 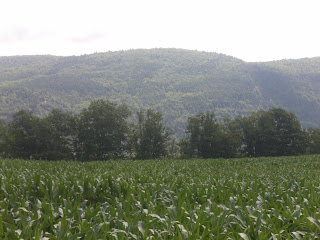 Corn, green and mountains
I was hotter and ready to be getting home when I used my husband's suggestion.  I took a  road to avoid a killer hill to get in a longer workout and be more fit.  It was exceedingly pleasant and shady. I am a sucker for shady tree covered roads and this one went next to the river. 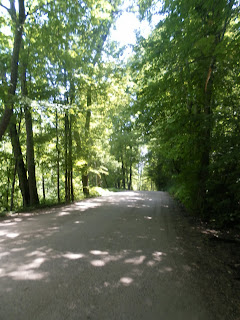 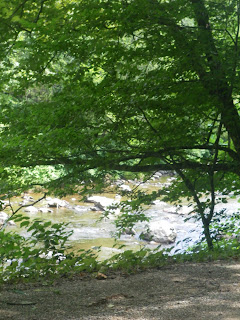 But even though I missed one  hill the worst one was yet to come. I made it up it and it made my hills home seem not so bad. So 32 miles yet again this week, no gas used to do my errand and a great ride.
And what was the book I rode 32 miles to pick up?  There it is below.  I liked the first book the author wrote so I'm giving this one a try too.

Love that you rode your bike to pick up the book! I love to ride for errands but do it so little.

Beautiful pics! Creepy about the motorcyclists. I would have been nervous. Have fun in DC with the Irongal!

Most of the roads I ride on are six lanes of highway-speed traffic (in town), I almost can't imagine a shady tree-lined street like yours! I would have been very freaked out by those motorcyclists. Knock wood, I have never been harassed on a bike ride.
I love how you tossed in a reference to Emily's IM!! :)

Never knew about the parsnip thing. Sounds like it would be an awful experience.

"To get in a longer workout and be more fit". Ha! Smart choice. Oh my, freaky about the motorcycles. Unpleasant indeed. Love your pictures as always. Have a super time in DC! Oh-great buy on the bike shirt IMO:)

Wow - I can certainly understand why you never took that route again after being intimidated by those bikers - that would have freaked me out too.
As you know, I also love to combine errands with exercise - sounds like you had a great ride there and back - the shady route sounds espcially appealing - but I know you only took it to be even more hardcore, right? ;-)

The book looks interesting. Lately I've been buying books by their cover (yeah I know I shouldn't judge them that way) but so far it's worked well for me. And that cover looks intriguing.

Great ride again! Too funny with kitty giving you a nice sendoff :) Have fun with your visit to the Ironwoman!!!

Creepy story from that long ago ride. Glad you exorcised those demons.

Beautiful scenery. We have a type of invasive species here that is reeking havoc--it's a type of mustard weed that crowds out all the underbrush.

One of these days when you head down to DC shoot me an email and we can meet up!

Beautiful pics, I like your new bike shirt and the sweet cat.
About pleasant memory: I got the speedometer too and it was a wonderful gift from my mom.
Unpleasant but pleasant. When I came to USA (2000) I met near a solitary restaurant in the Arizona desert a group of bikers with Harley Davidson, black helmet and black jackets. Well, they were very friendly and we took some pictures with them and on their motorcycles.

Beautiful pictures as always! Great job getting in your errand and workout in the same trip.

Beautiful bike ride Andrea. Your unpleasant memory would have freaked me out too. I'm still careful when I run early in the morning outside the village and someone passes me. You never know right?

What a great way to do your errands. I love shady, tree-lined roads too.
Have fun in DC.

The better local bike shops will have a way to measure the distance between your sit bones and then can recommend a saddle from there.

I run totally different saddle types on my road bike and triathlon bike just because of how I am positioned.