Monday:
Today I got my bike sized.  I had not had this done and my knees have been bothering me some.  The guy spent about 45 minutes with me and it was free so I won't complain

EXCEPT
The first thing he did was have me sit on what he jokingly called an assometer.  It measured where I sit and then he compared it to my bike saddle. The verdict.........my ass was too big for my seat so I needed a new one.  Hmmm.  Did I just get insulted?  He cleaned up my old one and gave me some money for it toward the new one. 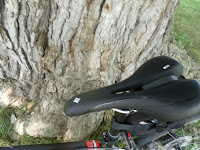 Here is the new bigger seat.
Then he asked me how far I usually rode.  10 or 12 miles?  No I just rode 40 the other day.  My son is always telling me that my demographic works for me as no one ever suspects me of shoplifting when I carry a back pack in a store and situations similar to this.  But it also works against me - twice in this bike shop! Truly the guy was nice but he was making assumptions based on my looks and age that were not at all true.
I also bought stuff to clean my bike. It was pretty dirty and I do want it - the gears etc. to be in the best condition they can be.

I also want to get  a rack - sure that will happen soon and those clipless pedals and shoes etc.  Man cycling is so much more expensive than running!

This morning I got up early and got a ride in before the next storm (there had already been one which was why my bike was so dirty.) Then I went to the gym for a speed workout just as it started pouring. Perfect timing!  Yesterday my 8 mile run was awful! No energy! No pizzazz.  Today the speed workout rocked!


Tuesday:
Today I set a new PR distance on my bike!  I set out to do 42 as the route I had chosen was 42 miles.  I wanted to do about the same as last week. Before today my all time farthest distance was 43 miles.

Well, I was following a route in my book which had a choice of 4 possibilities for this route. I chose the longest one. But sometimes the directions are a little confusing and right off I did a few extra miles.  No problem - I was fresh and it was pretty. 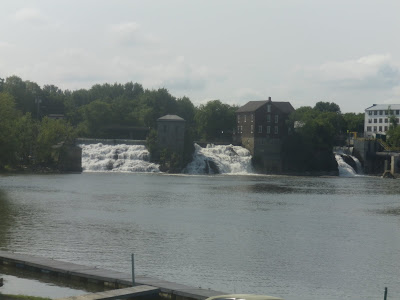 I ended up going close to Lake Champlain but never seeing it.  Last week I was on the west side of Otter Creek which is a tributary of the lake.  You are on one side or the other.  I have never been on the east side much so this was a treat. 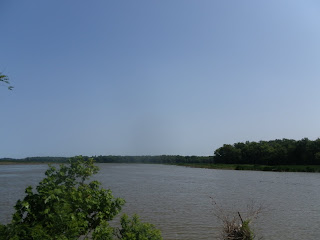 Otter Creek on both sides of the road 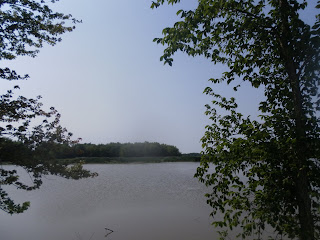 It was relatively flat.  I got lost again but it just made me end up on route 7 sooner. I think this may have added a little mileage.  Route 7 is a very busy road but there is a wide shoulder. I wasn't on it for long before I was back on the West side of the road heading toward Charlotte.   I ended up on the road that goes to the Charlotte Ferry but I was headed in the opposite direction. 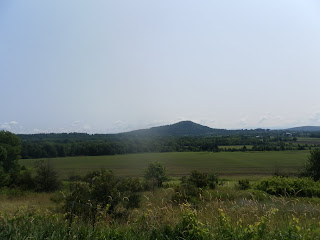 I do know my limits.  This mountain (small) was an additional
section you could add to the ride.  I chose not to do it.
Smart!
I crossed Route 7 and stopped at a snack bar to get water.  At the top of the hill I parked myself under a tree and had my "lunch."  It felt good just to sit and take my helmet off. It was hot! 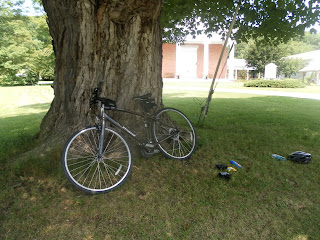 The next several sections were much hillier.  The first section on this side of Route 7 ended up doing part of the duathlon I did in June.  I got to one part where I needed to commit to the longer ride I was doing. I could have veered right and gotten back to my car much sooner. 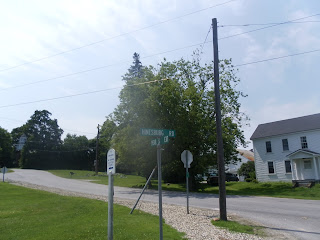 Had to decide if I could really do the longer route.
But I had made a goal for the day and I don't tend to veer from my goals so on I went. I came to a section I know well as I drive it often.  It was the hilliest of the day.  I stopped at a store again desperately needing water. I hated leaving my bike (no lock) but knew it would be nuts not to get water. All went well and I also got some Combos that Emily had recommended as a pick me up on her long rides. I don't know if it was the placebo effect or they really did it but I was absolutely perkier the last 9 miles.  This was also hilly but more of a fun hilly - BOTH up and down. 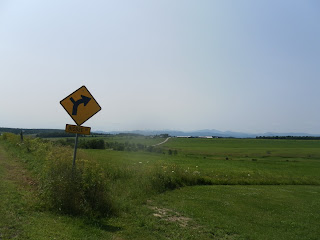 The Adirondacks are way in the distance.  I know
I stop well before that. 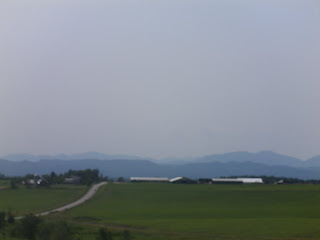 You are rocking that bike!! My bike seat is not the right size for me, and my friend has gently suggested a few times that I pay a visit to the assometer (though he didn't use that term :D). And really, it's not about the size of your butt but of your pelvic bones, and you can't do anything about that. When you go clipless, you may need to adjust your seat a little higher, at least, that's how it is for me now.

What a great ride you had! Such a beautiful route. :)

It's not really your butt that's being measured it's your sit bones. I don't think sit bones are directly tied to butt size. All is fine.

Sounds like that "free" bike analysis cost you some, but it also sounds like it's money well spent. Forty-seven miles is purdy dern good, girl.

I have been having knee pain as well on long bike rides but haven't wanted to go in for a fitting as the cheapest I found for a fitting was still super expensive! Lucky you got it for free =).

Assometer!! I am still cracking up! I didn't even know they had something like that. My bike store must be really behind the times! Nice job with the ride.

Super ride, well done! You really have beautiful places to ride. Seems like the dark side is slowly consuming you...:)

Wow, you are turning into a cycling queen. I hope the new saddle is better suited to you and is more comfortable.

...and a lovely 47 miles at that! You really are logging some miles this summer! I have a strange love for combos. They are my go to snack if we ever stop at a convenience store. Can't explain it.

I guess if you are going to get a free fitting, you can't complain too much... although it is kind of funny he probably had no idea what he was saying.

47 miles is huge! Way to go! It sounds like you've done well with your running too. Any other duathlons you can sign up for?

You are a pedaling machine! Congrats on the new distance PR. You are motivating me to ride more - for exercise and general transportation/errands :)

Amazing! Does your helmet have a crown on it? Well it should! You're the queen of the cycle! Enjoy it!

Great job on the miles! I'm hoping to get out for some longer rides still this summer. Darn work keeps getting in the way. :(

Hooray on your new long-distance goal, and boo to the dude in the bike store. Hope you let him know that you didn't appreciate being typecast.
Pics are, as always, gorgeous.
Happy bikings,

YAY for the 47er, that is fantastic!!

The bike shope dude was rude! I think, too, bike seats are very individualized according to what works. At least that's what I found for myself.

Reading your first paragraph it sounds like you're after some major plastic surgery. Your ass is too big and you need to get a new one. And you need a new rack.