Three Things Friday - Is That Allowed?

1. I am AMAZED at the number of you who do not know what a whoopie pie is. My guess is you just call them something else.  I am especially surprised Char who cooks such yummies doesn't know.  Here is the Wikipedia definition and we all know Wikipedia is always right of course.

The whoopie pie (alternatively called a gob, black-and-white, bob, or "BFO" for Big Fat Oreo) is an Americanbaked good that may be considered either a cookie, pie, or cake. It is made of two round mound-shaped pieces of chocolate cake, or sometimes pumpkin cake, with a sweet, creamy filling or frosting sandwiched between them.[1] 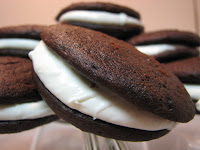 I have seen other flavors than the ones mentioned but the pumpkin is to die for.  Around here you can buy them in the gas station/convenience store places. I prefer the bakery ones, in fact I don't think I have bought one in a convenience store but I know my son has.

(After finding the key I went for a relatively short but fast for me run that really helped with some of the stress.  The stress helped with the speed.  Yeah for running.)

Aside from the key debacle, I spent hours on the Internet last night researching cars, financing, incentives, various dealers' inventories.  For many reasons I was quite sure I didn't want the car I had.  Too much pressure to buy, it was a "used car" with 1500 miles so wasn't eligible for incentives and rebates.......(didn't know this until I researched) But there aren't many cars out there due to the tsunami so was I going to be able to find one that I did want?  My wonderful wonderful wonderful cousin did a ton of research for me and called many many dealers and salesman today to find out more, do some dealing for me. As I was at the dealers today he is on the phone with a different dealer getting exact numbers for me. It was a dealer I had requested a quote from on the Internet last night.  A salesman called this morning and was much much more low key - important to me.  He worked hard to get my business.  So I was in a good position when I went back to the original place today.  I didn't want the car.  Then he tried to make a different one work for me but bottom line was $80 more a month for the payment and higher financing. So tomorrow I am off to the other place where the car is all ready for me - once I sign a lot of papers of course. I will take pictures. Tonight I took my car out for a last ride.  I have had it since Dec. 1999(it is a 2000) and it has 192,000 miles on it so we have spent A LOT of time together. All the salesmen were astounded at those numbers. I got my money's worth out of that car.

3. And who knew there was so much to say about serial killers?  I have been asked what the series are.  My favorite is by Chelsea Cain. They take place in Portland, Oregon and pull you right in.  There are four in the series so far.  The other series is about a detective who was raised Amish.  It is by Linda Castillo.  I think there are two out and one more to come.  Thanks for the other suggestions.  Darlene had a very creepy story about serial killers. Go back and read my comments if you are interested in seeing it.

I just finished a different book I loved.  (Chris K will prefer it to the serial killer as it is more of a chick book and he prefers those.) It is The Blessings of the Animals by Katrina Kettle. I hated to finish it. It was one of those.  Many likable characters in the book which always works for me.
Posted by ajh at 9:08 PM

Whoopie Pies must be an east coast thing. I know what they are.

Now that you are a cyclist and addicted to speed, I hope you are buying a Lotus or something.

Ahhh, "As the Car Wheel Turns." I love *having* a new car, but I hate all things related to the actual buying of a new car! Can't wait to see what you got.

So glad you found the key to the car and that you're buying the car that's right for you. I can't wait to see what it is!

I too run faster if I'm running after a long and stressful day at work or am miffed about something.

Funny about the key.
Glad your car saga is almost over. I hope my car will survive a few more years, though the odometer shows 180K. I wish I could just go on the Amazon and do one click car purchase.
Whoopie pie is way too sinful for me. I can see myself having two, or three...

Bryan Ferry is the front man of the Roxy Music.
You can have a look here:http://www.youtube.com/watch?v=kOnde5c7OG8

Whoopie pies look like ice-cream pies to me :) Those in the picture do look delicious!

i still think that i've never seen a whoopie pie before.

the key debacle sounds like something i would do.

having just gone through a car search (mine was a search specifically for a used car) i do understand what you are going through. best wishes getting the right car for your situation!

I trusted your advice on the Chelsea Cain series and devoured them...so I'm going to trust you on your recommendation to Chris K, too. THANKS!!!

Thanks for the info on whoopie pies! I've never had one, but will keep my eye out in case they start exporting to the UK!

Now I know what a whoopie pie is :) it looks really delicious.

I have read one book of Chelsea Cain and liked it. I think I will read more of her in the future.

About the ballooning: it's his first time. A balloon ride is still very expensive here in Holland. He always wanted to do this and this was a gift of his mother for him and his brothers as they helped her move in the beginning of this year. I'm glad he's going with them because it's not my dream to do this :)

Good job finding that key! Husband and I go through the where-did-my-keys-go dance. It usually ends us blaming the cat :)

The story about the car key made me laugh because my Saturday walking friend works at a car dealership and a couple of weeks ago she lost a car key. It's never been found.

Whoopie Pies always look like the best snack idea ever, but then half way in I decide it wasn't the best idea and end up sharing it.

They still get me every time!!

Very funny Smarty Pants. My g.f. just gave me a new book present. It's call Unbreakable and written by the same lady who wrote Seabuiscuit. Apparently the first 25% involves alot of running. It's supposed to be fantastic.

Whoopie Pie? Not big here. Not at all. I've seen them on The Food Network. I think it's a regional thing.

I love whoopie pies. I've made pumpkin ones before. My mom's best friend was from PA and called them gobs and I always loved it when she made them.
Good luck with your car shopping.