Up Around the Bend 7 Miler Race Report 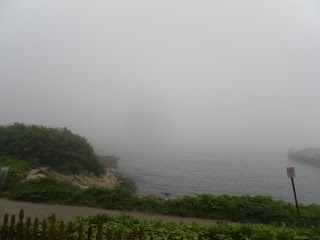 It was very foggy the night before the race but race morning
was nice and clear.
Another July race done!  Today I ran my first race in Rhode Island, a hot sweaty 7 Miler that I expected to have more beach views.  That part was disappointing but it did end near The Towers in Narraganesett right on the beach. 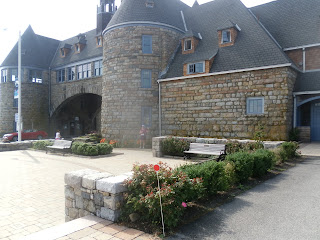 If you have really good eyes you can see I am in
this picture taken after the race. 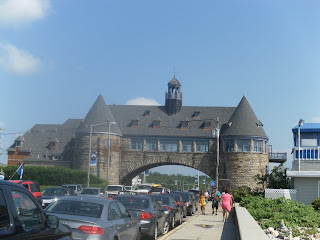 Overall the race was poorly organized with not enough volunteers.  It started late and people got lost and ran too far because turns were not well marked. The director apologized and was looking for feedback. Would I do this race again? If I lived close, sure.  It was fairly flat and a fun distance. But it is not one I would drive back to. 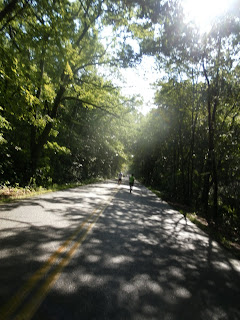 This was a very pretty  shady road we were on.
Green shirt lady is ahead of me.

I passed her near a water stop but once I stopped at it she passed me.  I had to ask for help from a spectator as it was an unmanned water stop with bottles and I could not get the top off as I was too sweaty.  Once back on the course it took me awhile to catch back up to green shirt lady but eventually I passed her and stayed ahead of her the rest of the way.  Then I wasn't close to anyone but could see in the distance where they turned so I didn't get lost. 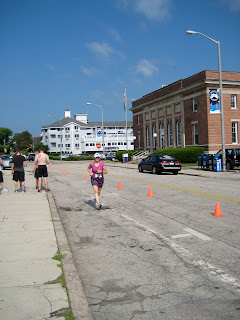 Approaching the finish - I was not smiling
as I was very hot! 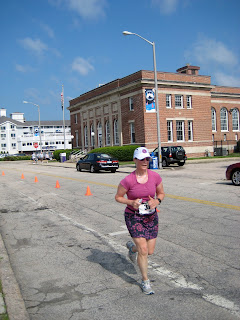 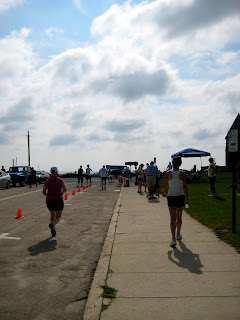 My friend, H, came with me and got some shots of
me finishing, always fun to have.  She is
the one who got the great shot at the Hampton
Half this winter that I had as my header for quite awhile.
I had thought from looking at the course map that we would be running along the ocean but that never happened. I was carrying my camera so I could get some pictures of it. Oh well.  After the race a lady came up to tell me that she set  her eyes on me and kept track of my outfit to keep her going.  I always like hearing that! 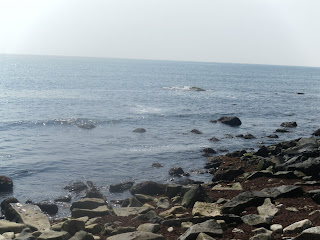 I LOVED my new Garmin. It was so much easier to see my pace as I was running. It is very easy to use.  I will have to see how the battery holds up but I love how easy it is to see and use.  Big hit.

I did get a tech shirt.  The first 50 people registered got one. The people at registration had no idea who the first 50 were and gave them to the people with bibs 1 - 50 even though it appeared the bibs were given out alphabetically.  I scored! 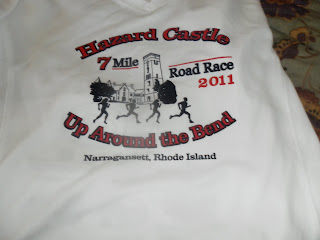 Overall I was 95/135 and in my age group I was 4/6.  Would have liked to have been higher but still happy overall.
Don't forget to vote for Emily. Six more days!

That's a pretty ending point, anyway. Hopefully the race people get their stuff together for next year. Looks like you ran well in the heat. Congratulations!

Nice score on the tech shirt! What a fun and interesting distance to race, sorry it wasn't near the ocean (or better organized). I've never seen an unmanned water stop before, that must've slowed everyone down! Good job pushing the pace in that heat!

Congrats on doing well despite the heat! What a pretty spot to end the race! The tree-lined roads also looked nice to run on from your photos. Too bad the race wasn't more organized because the event does have some decent selling points (tech shirt, unique distance, great finish area). I'm glad the new Garmin is working out for you, too!

What a beautiful photo of The Towers in Narraganesett!

Great race considering those weather conditions. The fourth photo shows that it was a pleasant place to run. The tech shirt which you got is really nice! I always try to register first too :)

Have a nice Sunday!

Disorganization is not so fun...neither is such heat! Glad you still managed to do well and look great doing it too. Love the skirt!

Yes, Kathleen wrote about the skirt! :-)

I think you ran a great time, especially considering the heat.

That shady road is absolutely beautiful.

But what a terrible organized race, it would make me cranky. And I have never ever seen a water post here in Holland where there wasn't someone to help you.

great job on the race!

it's always nice to find out that someone was trying to catch YOU. :-)

If not well-organized, it was beautiful, looks like. Nice work out there chasing that lady down!

That the person took the time to tell you how you helped her finish by running ahead - very nice!

sorry the race wasn't the greatest, but like you said, it's cool when someone tells you they used you as a pacer!

You amaze me how you will race in all kinds of weather - snow and ice and heat and humidity. You are hardcore. ;) I hate racing in the summer.

A beautiful tech shirt: good for training and nice memory too!
It looks like a tough race under the sun. The lack of organization is always a problem, I have a personal black list for that.
...but you made a very good job! Congrats.
Indeed in summer, after the last good experience, I prefer to race by night.

Great performance in the heat! That's too bad things were so poorly organized - hopefully they will be able to make some changes for future years.

Congratulations, that race looks beautiful, and then not beautiful at the end, way to tough it out.

So glad you finally got a garmin that works!