The Conclusion of: As the Car Wheel Turns 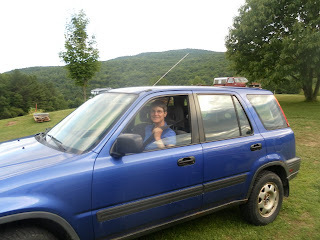 The last ride - I really did feel rather sad.
Thanks P for help with the post title.

First and most important:


I HAVE A NEW CAR!
This is a very big deal.  I am replacing a car I bought at the end of 1999 which has less than 10,000 miles to reach 200,000 miles. I might have kept it longer but rust was becoming a significant factor.
I got yet another call from the original salesman now telling me he could make the payment I wanted work.  Well, it was too late as papers were signed and this baby is mine!  (at a much better rate) 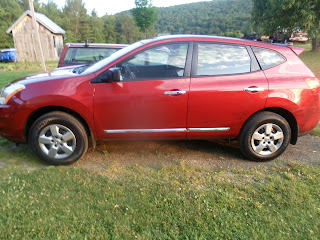 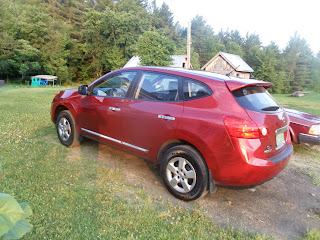 Since it's been awhile since a new car and I have been friends all the things that many of you probably take for granted delight me.  What's the temperature? Why it's right here on the dash.  What is my miles per gallon?  ......on the dash  How many miles before I need to get gas?  .........on the dash  What time is it?  .......on the dash (My clock was broken many years ago and was very expensive to fix so I didn't do it)  It's hot in here.  I guess I'll turn the air conditioner on.  (also broken and didn't fix it  after one or two fixes)  My favorite thing is that the Ipod plays on the radio and charges as I go.  I know there are so many amenities out there that I don't have but I am thrilled with what I got.  Good cup holders, a comfortable seat and ride and everything else is gravy.
Cleaning Out my Old Car
1. I never throw away money even if it is only a penny.
2. But all those safety pins I carry around in case I don't get them for my racing bib are history.
3. I am in love with binder clips.  (Ask my kids.) I saved every one I found and I found many.
4. I have been carrying cassette tapes around in my car forever in case I ever listen to them again.  Well, since I now no longer have a tape player they are gone!
5. I did different things with pens.  If they are the cheap variety they went in the garbage bag.  But if they were the type I like I tested them and if they work I saved them. I can never find a pen in spite of being a geek who likes office supplies and owns many. I'll blame it on my husband.
6. That new snow brush  I bought this year because I needed it so badly. Well, not really.  There may have been one or two already in my car.
7. Those clothes I carry around in case I need them.  Well, I really need to check out what I have as yeah they may have come in handy if I paid attention to what I had.
For now there is no eating in the car.  Not sure how long that will last but it won't hurt me to eat fewer places!  I did buy myself one new car present. 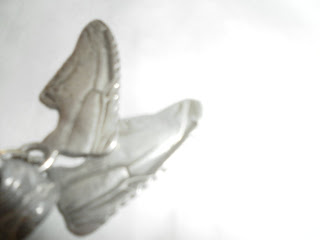 I already had this running shoes key chain. 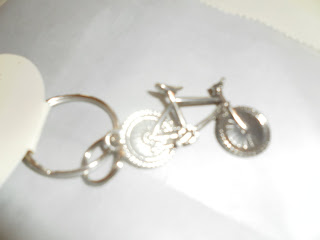 I thought I needed the bike one too.
They are quite nice - both from Danforth's
Pewters.

I did get a very sweet ride in on Saturday before we went to pick up my car.  Saturday was definitely the most perfect day weather wise we have had in quite awhile.  I just rode 11 miles as we had places to go and things to do but what a wonderful 11 miles it was. I just stopped for one picture as I was going up a hill near the middle of my ride. 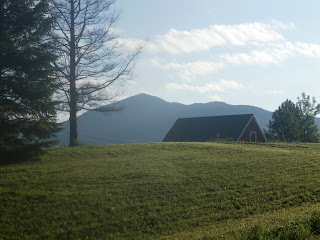 Happy Fourth of July
Don't forget to vote for Emily.

Oooh... I love your new car! It's so shiny and looks like it will go fast! You definitely have more amenities with your new car than I have with my current car (I'd love to know what the current temp is, for one).

Thanks for the reminder to clean out my car! :)

I love your new car! Is there anything better than the new car smell? Enjoy, enjoy, enjoy!

Oooo, I heart the new car!! Very shiney and .. new!! I haven't had a "new" car in forever, we tend to buy them a couple years old. I am very envious!

Nice presents that you had to buy for the new car.

What sort is it?

hHis is one hot car. May the rust keep away from it.
Happy 4th.

My car is 10 years old, and I'm hoping for another 5is years and 75,000 miles before I replace it (which would get me to 200,000). And then the new car will most certainly have an iPod dock. And, by that time, probably wings or something.

Congratulations on your new purchase! The inside of your old one sounds a lot like mine. :)

LOOOOOVE your new car!! It's so sporty and I'm glad you're enjoying all the new perks.
I totally need those keychains!

Hey, that's not a Lotus!

It's cool though, looks really nice.

Congrats on the car - enjoy driving it!

Love it! It looks like the one I wanted but we ending up going with a car. I get mine today!

What a cute new car! Our car is also from 1999 and we are going to keep it for as long as we can - we are hoping to get a few more years out of it. I must admit I am looking forward to all the new gadgets that come with a new car...

Awesome! That's exactly the one I am looking at too (color and all). Let me know how you like it. I would love to replace my 10 year old gas guzzler!

Oh, pretty! I'm terrified at what I would find if I cleaned out my car and I've only had it for 4 years. I couldn't imagine cleaning it out after 12 years!

And binder clips are pretty much awesome.

I love your car!!! You'll have a nice time getting around in it and enjoying all the extras you haven't had.

very belated congrats on the new car! :) lookin' good, and i love having the temp on the dash now... we are spoiled in this day and age!

Oh, it's sad to replace something that has been with you for a long time. But remember that every end has a new beginning. Now that you have a new car, you can create new experiences and go to new places. You also have a record to break! Your old car is rusty now, that's why he deserves rest. Hope you had a happy 4th of July with your new car! Cheers! :)