I finally got in the 8s for a race pace!  Today was our local Fourth of July race.  It was a hot one but at least it started early.  There was a great turn out.  This race was started by a young couple who moved to town and thought Bristol had a great Fourth of July but needed a road race.  It has grown every year. It is very casual and lots of adults and kids who don't race often do it.  I had one student running :) and one former student. Both ran with their parents. 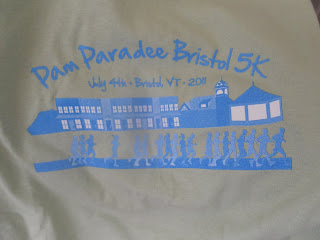 This year the race was more special due to sad circumstances.  The wife of the couple died slightly less than a year ago of Hodgekins lymphoma at the age of 41.  She left behind her husband and 3 sons. The oldest will be an 8th grader and the youngest will be in third grade next year. (in my class)  I haven't taught either of the other boys but our school is small enough that I know them.  Many of Pam's relatives raced including her father.  The race was renamed the Pam Paradee Bristol 5K.  It was nice to see so many people turn out for it.  It's a well organized low key race.

The route was changed slightly from previous years. I ran with my IPod for the first time in a long time and I think it helped.  My first mile was 8:44. The second was 9:17. This was the one with the hill. I knew I couldn't fade if I was going to end up with a pace in the 8s.  My third mile was 8:54 with the last tenth being 8:27. I wasn't sure if I had done it until I checked my Garmin!  Yeah!  My overall pace was 8:58. I was soaked as it was humid!  I had to rush home and change to get back down for the parade. The Fourth of July is in a big thing in Bristol. I never get to see them but there are outhouse races in between the race and the parade. These were featured on the Today Show one year.  They take bets and the money must go to the Fourth of July festivities. I am not sure.

So home, clean up and I decided (along with my husband) to bike to town.  Traffic is crazy so this seemed to be the way to go. By the time we came home it was hot hot hot. I decided to continue the ride further which may not have been brilliant as I was wiped when I got home.

Back to the parade.  First when I went to the race at 7:00 I saw several people already sitting on the parade route waiting for the parade. Now it is a decent small town parade (the governor was in it)  but it isn't any Macy's Day Parade. You do not need to secure your seat at 7 in the morning. It starts at 10:30.  Yes it gets very crowded but really?   3 1/2 hours early?  Fortunately we have friends who live on the parade route so we don't need to worry. 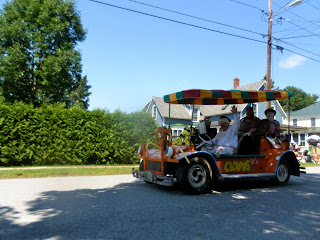 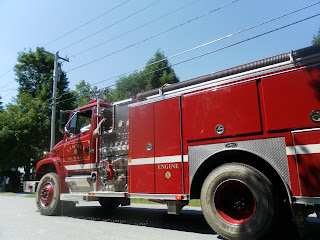 Many many many firetrucks 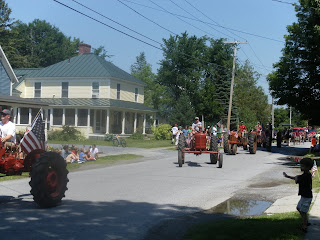 What would a Vermont parade be without tractors? 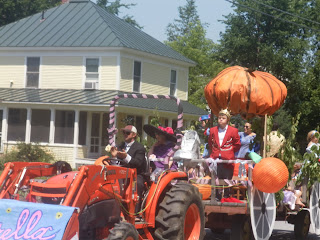 And even some floats! 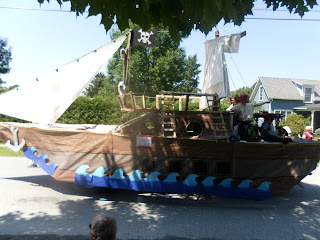 Fantastic result! That's a PR for this year isn't it?!

Great race!!! I love the 8s and can't wait until I start visiting them more frequently!!

Enjoy the rest of your 4th of July!

Congrats on the 8th. Super!

Congratulations!! What a terrific race!
I love all the parade pics, of course. Those floats are so cool! Our local parade has a lot of fire trucks, too, but my favorites are all the high school marching bands.

Oh, and Tri shoes are more of a minimalist shoe. They are light weight and made of a kind of dry wick type material that's supposed to help them dry faster. I don't know....I really just thought they were really cute :)

Congrats!! That is so amazing that you got into the 8's! I'm super impressed and totally inspired :)

I would love a parade like that. I obviously enjoy where I live and all, but Huntington Beach is a War Zone on the 4th. Ughhh. Might have been cool when I was 20, but not anymore.

Congrats on the run, always awesome to have new number to the left of the ":".

Nice job with the race pace! I wish we had a 4th of July parade...seems odd that we don't. Like the float pictures, can't have a parade without pirates!

What an excellent day! And congrats on hitting that race pace!!!

Congratulations on a great race!
So sad to hear about those kids losing their mom - things like that always make me think about how lucky I am to be healthy and alive...

Yes, now I see why you are happy with your race! Congratulations! I just realized we don't have many parades here in SA. Strange, but it is something that just doesn't happen here...?

What an excellent accomplishment! Nice number and you deserve it too. Cool parade, I especially love the boat float, so creative!

First of all: congrats on your new car.

I love the parades that are being held in the US on special days. Something we do have here in Holland but not very often. In my town never.

8s! Congrats.
Isn't it cool to see your students racing? I am sure you inspired them.
That looks like a very cool parade. Glad to see communities celebrating. Here in CA several towns canceled fireworks because of budget problems. :(

Congrats on getting into the 8's!! And on a warm day to boot. The parade sure looks like fun.

Holy!! Congrats! I am going to be channelling you in my next race.

Good race! I think you enjoyed it although the weather was hot. I always like races with lots of adults and kids :)

Nice photos! It seems a great parade of old firetrucks and tractors.

Great job getting down to the 8s!!
What are outhouse races?

I love, love, love that house in the background! My style of house!

Sounds like a great day at the race and the parade! Happy 4th of July! Congrats on the sub-9:00 race!!

8:58! Look at you! Great job! I will now adjust my expectations accordingly!

Great job with that pace! Speedy!

Glad you had a wonderful 4th. It's great to live in America :)

Awesome job at your 5K race!

Tractors are a staple at a lot of Minnesota parades, too. I would love to see an outhouse race. That sounds hilarious!

Congrats on the speedy race!
We saw our share of parade tractors here in Maine as well. Very cute!

Made it to the 8's - WAY TO GO!! You need ice cream or something after that accomplishment ;-) How's the new red car doing???

Congratulations, that is awesome!