My second century is in the books.

Once again I pulled it off with just 60ish miles for the long ride beforehand.  This year seemed easier but it could have been the perfect weather and the lack of monsoons at the end. 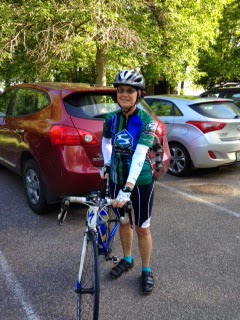 Ready to start. I say it was perfect but it was actually quite chilly at the start.

The weather was coolish but not cold for most of the day.  The sun was generally out and the surroundings were stunningly gorgeous.  They had twice as many riders as last year! 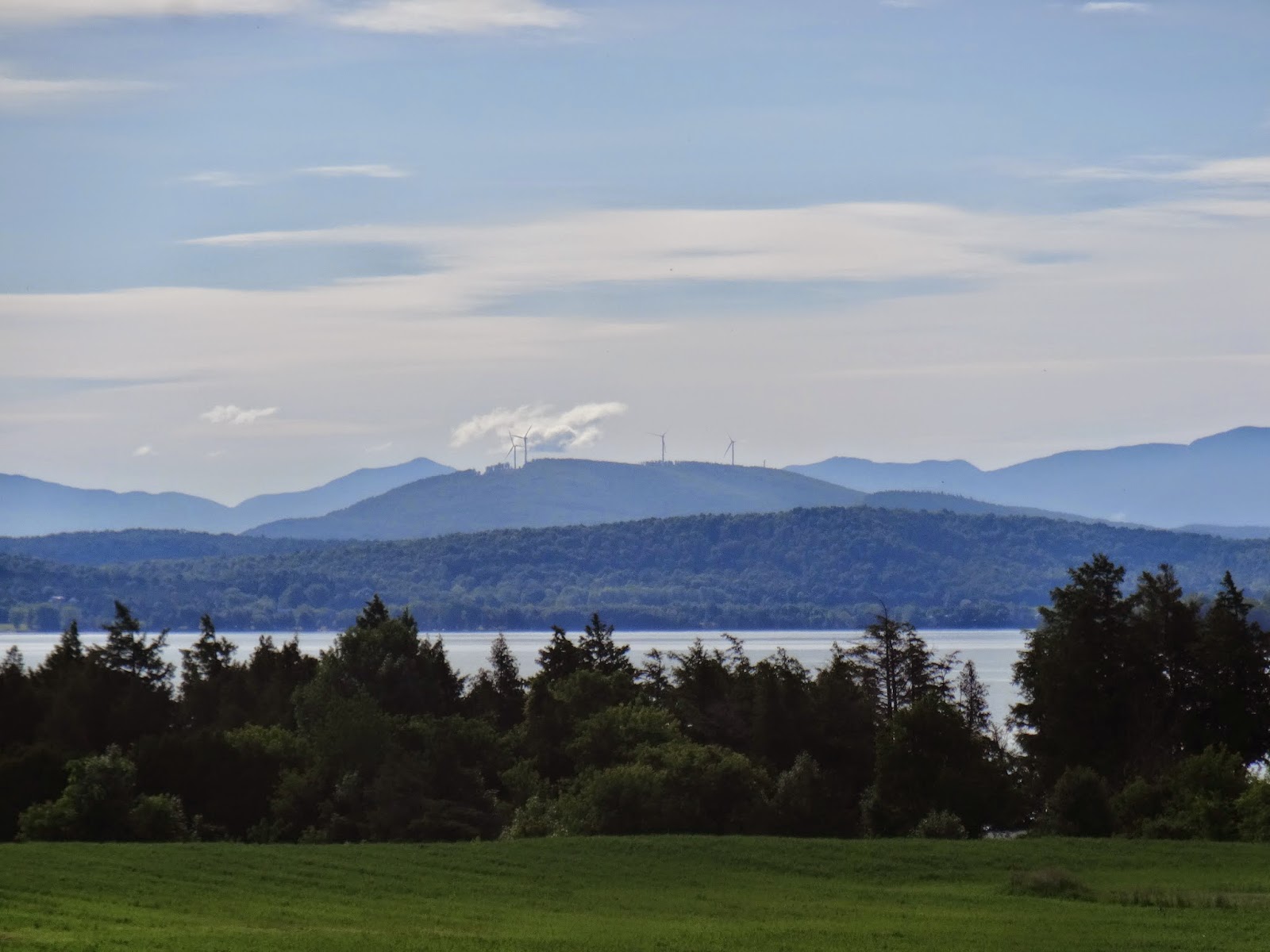 One of the first overlooks.  Stunning.

I rode this alone as I did last year.  Last year I had some friends doing it but this year they were all busy.
When I got to the first aid station it was packed as I think all riders go to that one.  Everyone is cheery and full of energy.  It's at about 23 miles. The next one on the 100 mile route was at around 61 so I was glad I had tons and tons plenty of food with me. 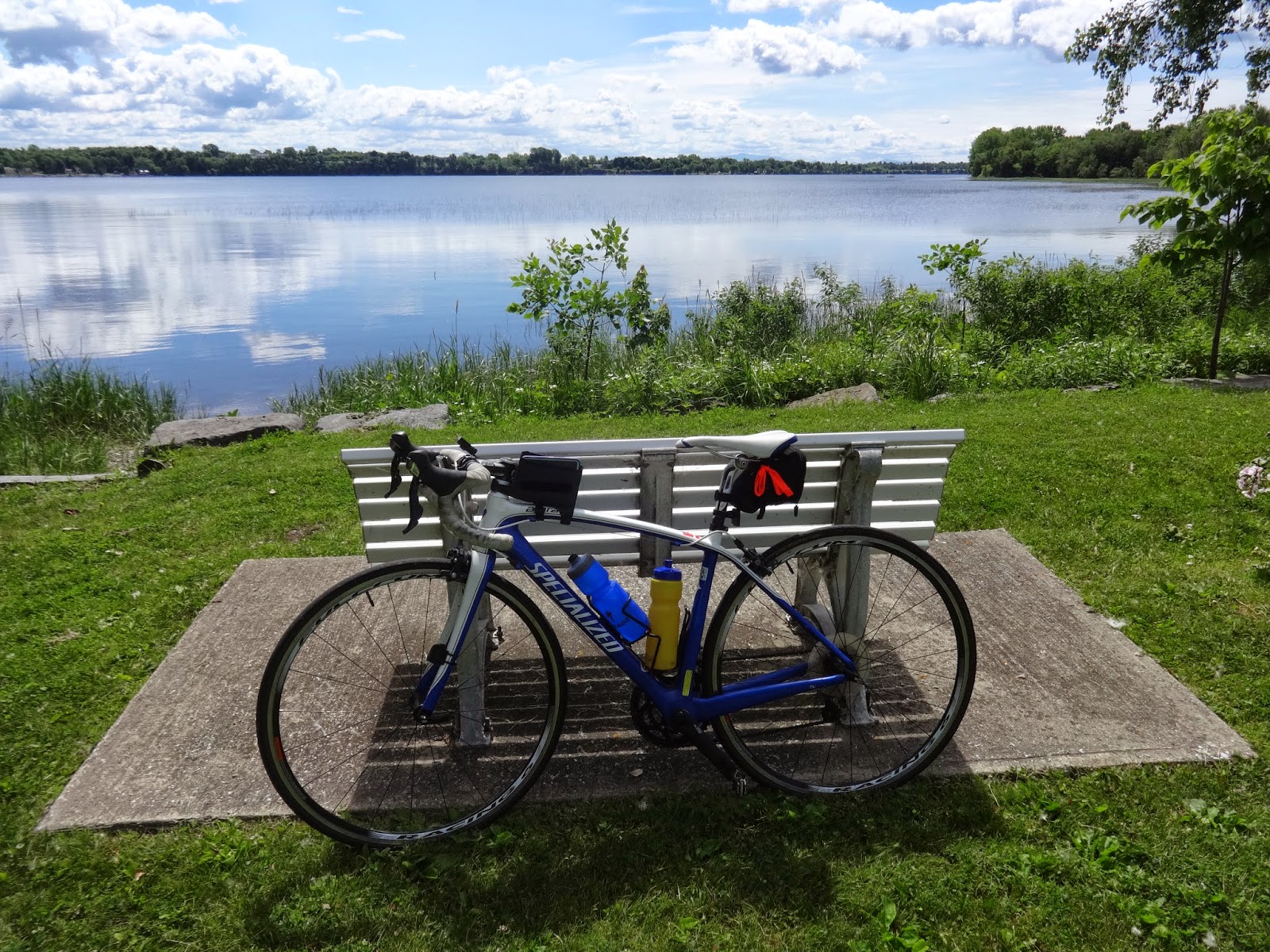 A pleasant place to stop and regroup. 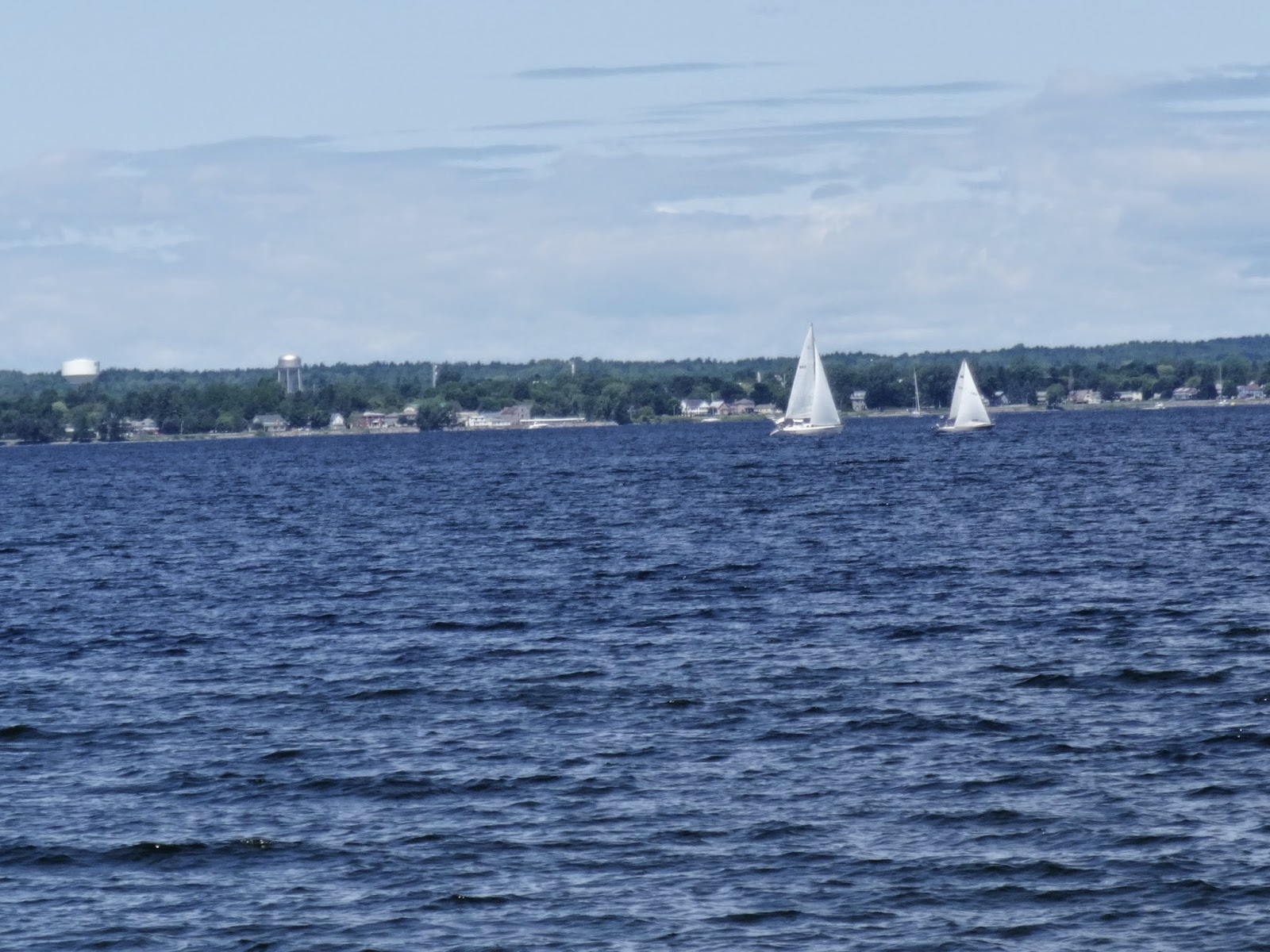 There were lots of sailboats out but the wind wasn't bad on the ride.

I stopped at a bench after I rode around Isle La Motte and ate a snack, reapplied sun screen and checked my phone.

I had another long section along the lake before veering off to the north to a part of the state I am not familiar with. This was pretty enough but no water.  Eventually you come to a huge bridge and you are going down along the lake again.  I got a message that informed me I was now abroad.  Nope.  No passport required to cross the bridge. 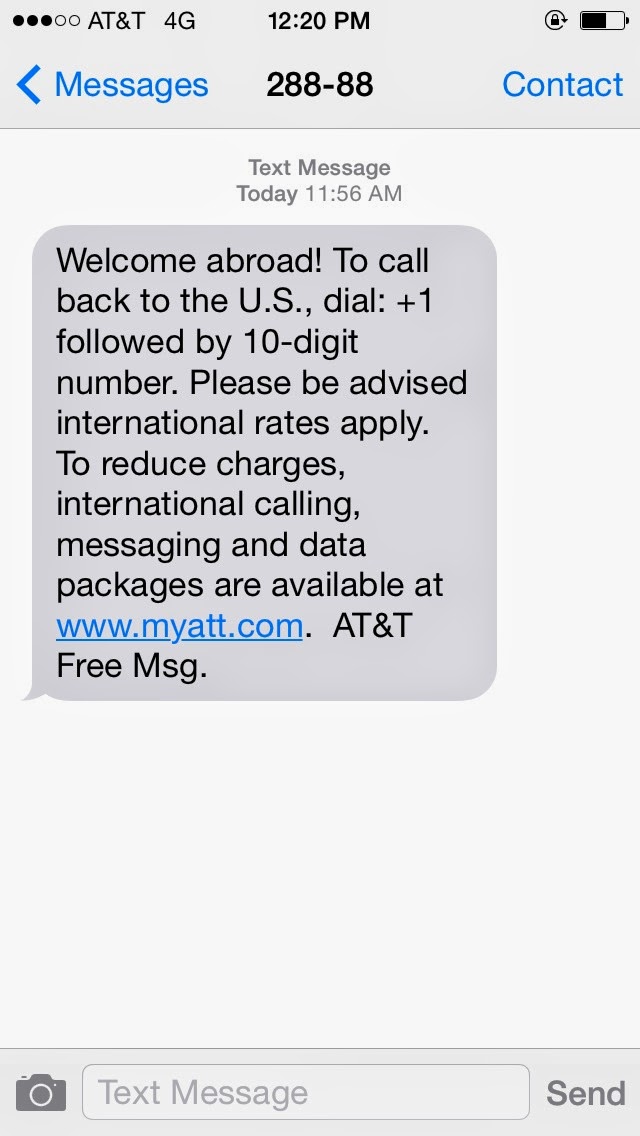 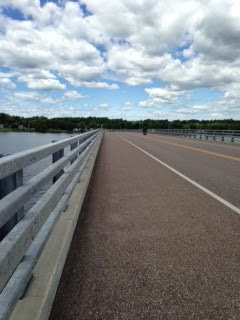 At some point in this section a truck came along and asked me if I was doing the 100. Then they said they would wait for me at the rest stop. Why?  I must be last.  I know I'm slow and I don't think many are doing the 100.  When I get there they are picking up the rest stop, all the food is gone although they scrounged some up for me.  The discarded banana peels were such a tease. So I ate more peanut butter and jelly, used the very clean new bathrooms here and continued on my way.  Now the guy from the truck and one other guy were riding.  I went ahead, again much of it along the lake and found the rest stop I missed last  year.  IT.HAD.WATERMELON!  The two guys and I were there. One man appeared to be the sweeper!

Sometime after this it got hilly.  Last year this section killed me.  I didn't find it that bad this year. Again - the weather really helped!

I was thinking about the burger and beer at the end for about the last 20 miles.  I wasn't dead but man did they sound good.  Trouble was when I got there IT.WAS.ALL.GONE.  I thought it was because I was slow but apparently they ran our for a lot of people. Very disappointing. 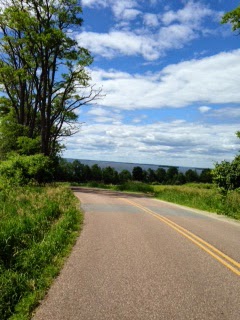 This is the beginning of the hilly section. 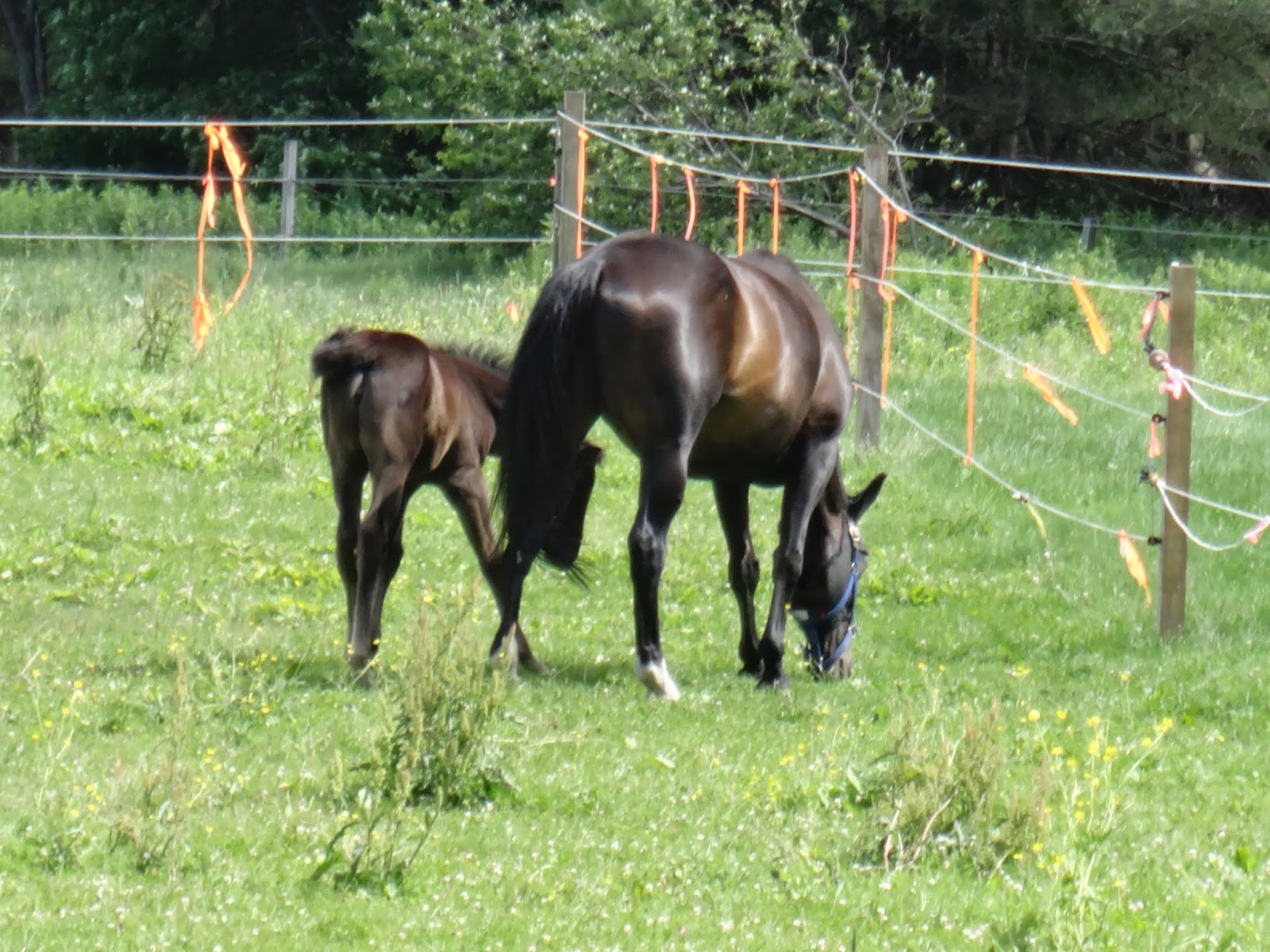 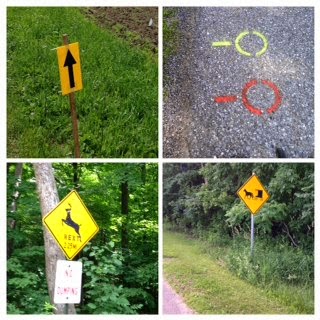 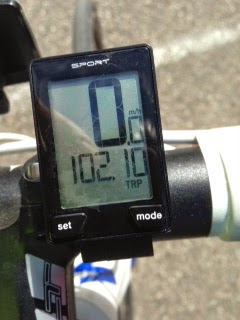 Awesome!! I HATE it when they run out of food! That's the worst.

You had yourself in good shape for this with all the biking you've done lately. And what a beautiful route!

That is simply fantastic. As were the pictures, per the usual!

At least you got watermelon. That's got to be one of my favourite race foods. Especially if it's cold.

Looks like you got the perfect day for it.

congrats!you did great. Enjoy your trip to Alaska. we have to plan a race together when you get back.

Yay! Well done on the century.

And I like how you had well marked roads for the different distances. I wish the bike rides that I have done were marked that clearly!

What a bummer that they ran out of post-race food for you! That is the most frustrating thing about being in the back of the pack--I hear ya! Glad you got some watermelon though. That must have tasted heavenly mid-ride. Awesome job on finishing! Can't imagine ever riding that far... :)

Congrats on an awesome ride! I can't imagine riding 100 miles, especially alone. At least your state is gorgeous! Thanks for sharing the pictures. Too bad you didn't get a beer and burger at the finish.

What a nice day for a very long ride. It's a good thing you brought PB & J. Congrats on the finish!

Wow, great effort, and the scenery looks stunning. Shame about the lack of burger though.

Way to go! Definitely something to be proud of!!!