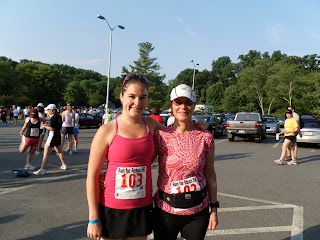 Em and I before the race
Saturday Em and I were up very early in a taxi heading to MD. We decided a taxi would be the most stress free way of traveling - more about that later.  We arrived at the race with lots of time to spare.  We got ready and tried to stay out of the area of the announcer who was seriously annoying broadcasting stupid jokes for more than an hour.  It was hot but it was just as hot for all the racers as it was for us. It was chip timed even though it was a 5K.  We lined up near the start  ready to roll! 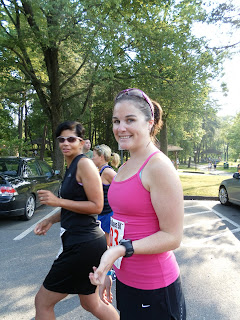 Em is ready to run.

We began and it didn't take long to feel really hot.  I quickly thought this was not my day for a great time. Between the heat and the fact that this was my 8th day of running in a row. But I still wanted to give it a good shot. It was a little hilly both up and down.  A lot of it went through a park and was really quite pretty.  There was a spot where we met the leaders and I looked for Em but didn't see her.  I did slow down before the finish because I thought it was farther away and could have kicked myself once I saw how close it was. Em was at the finish cheering me on giving me a little extra oomph!  I came in at 27:26 for a pace of 8:50.  I was 71/324. This was a women's only race and I would say there were a lot of first timers.  I was 3/29 in my age group but wouldn't you know they only gave prizes to two.  But Emily ,,,,,,,, was 5th overall and 1st in her age group! She won a $25 gift certificate to Fleet Feet but not one close to her.  Then they announced the winners for the mother/daughter division.  We won it!!!  Yeah yeah yeah!!!  Em carried me for sure. Her time was 21:37.  We just beat the second team by 15 seconds.  We won a basket of roses (which we had been eyeballing and saying we hoped we wouldn't win.  I won a pizza gift certificate which she can use and she won a bracelet. We asked if we could trade the basket of roses for water bottles which we did! 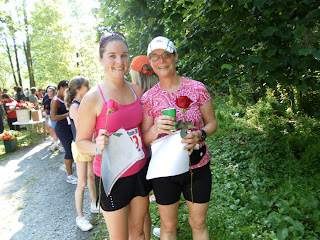 Em and I with our roses after the race 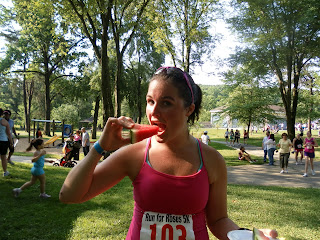 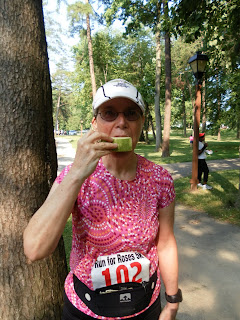 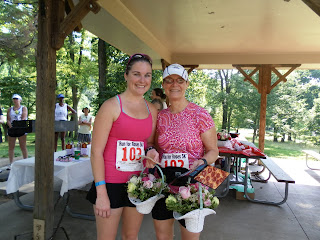 With the roses before we traded 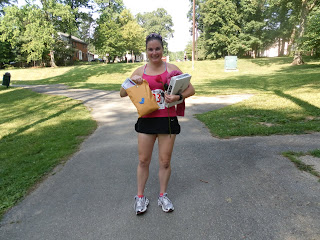 Em getting ready to carry home her loot.


We had about a mile to walk to the Metro.  We made it fine but I had to pee in the worst way. I had been trying to rehydrate after the race and now I was knowing it big time.  We got on the Metro for a 30 minute ride after a long wait for it's arrival.  Well, so we thought.  I thought okay I am a big girl, I can hold it.  After about 20 minutes at one stop the whole train offloaded.  There was no good solution so we started walking home.  Should have gotten a zip car, not stress free at all! The good part was we stopped at  a Starbucks which of course had a BATHROOM!  Okay!  Got some drinks and now my walk felt much more pleasant. 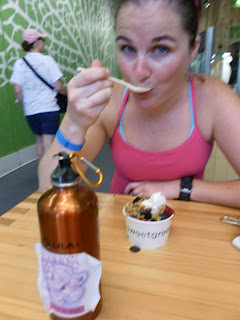 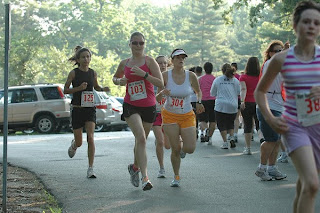 Em early in the race 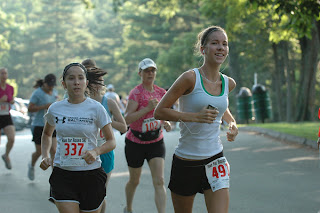 Me early in the race 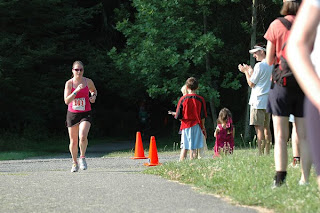 Em charging up the hill. 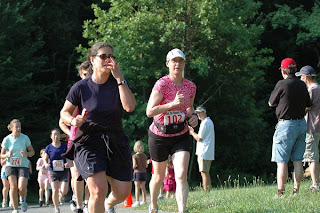 Heading up the hill! 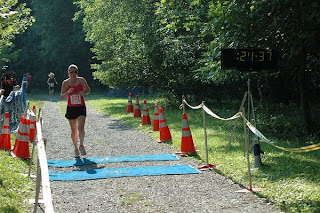 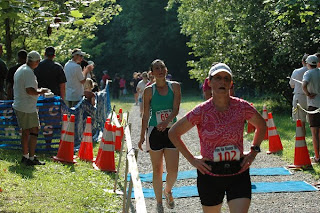 I'm done, looking like I finished a marthon, not a 5K. 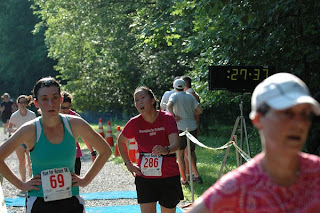 These two younger women BEHIND me looking just as bad. 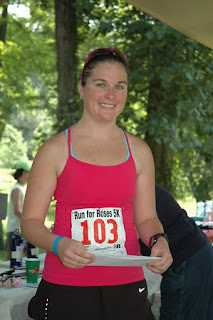 I had  a lot of fun racing with Em and winning the M/D division.  That is huge for me. But truthfully this race was pretty small potatoes to Em.  Today in the DC Triathlon Em was outstanding.  Outstanding! She has not done all that many triathlons and her results were amazing.  Amazing. I can't say how proud I was of her and how much fun I had being her sherpa and her supporter! I will blog about that another day and she might post about it herself.  http://sweatonceaday.blogspot.com/  Hint - she had to stay to attend the award ceremony- in a race of many serious athletes!!
I think we walked  10 miles today. I have bagged my plans to run 11 miles.  I just can't face it in the heat!  I feel like all this walking should count for something.
Happy running!
Posted by ajh at 5:21 PM

Awesome, awesome, awesome! It is so beautiful to see the wonderful relationship you have with your kids - so neat. Congrats to Em on a couple of great races - and both of you on the M/D win! How cool is that???!!! Also, LOVE your top! What is it??? I might have to find one for myself!
:-) Have a great week!
K

so fun that you guys won the mom/daughter !!

Excellent all the way around!! Congratulations to you two, woohooo!!

Congratulations! You both did so well. Wow! Em is a speedster!

I cannot believe we were at the same race.... WOW! It would have been a nice bloggy meet up... you were right behing me... I guess.

What great pics in both you last and this post! Sounds like an amazing weekend with your daughter. Congrats on winning the M/D division...you guys are both awesome! Your time is excellent :)

I loved this post! I am such a sucker for race recap pictures because it makes me feel like I was there with you! Congrats on a fantastic race for the both of you! Way to rock the mother and daughter race:) I love the picture of you after you finished...you look way better than I did when I finished my half yesterday:) Nice work!

I use John Stanton's running room marathon training plan. He encourages the 10/1 method, which I prefer, at least for the level I'm at :)
It's 5 runs a week...as you can see on my sidebar. Is yours similar?

Congratulations!! What a fantastic race! I have to admit, I laughed out loud at the pic of the two young girls behind you...sometimes the backgrounds of race pics are even better than the person you were trying to capture. :-)

That sounds like so much fun! Congratulations to you both. I can't wait to hear about the triathlon, too.

Congratulations on the mother/daughter win! Great job! Sounds like Em did great today too!

Looking forward to meeting you tomorrow.

Yes, it's run/walk...the program I'm following is 5 days a week for a 4hr marathon or longer and 6 days a week starting at 3h45 and less.

I'm aiming for 4h45 or less than 5h. My husband might add a 6th day once in a while, but not every week. I guess the important thing is to listen to your body and not get injured. Good luck figure it all out :)

That would be *figuring it all out* :)

Fantastic!! What a wonderful memory for you and your beautiful daughter!!

Congratulations - great M/D running! I wouldn't have wanted the roses either...

WHat a wonderful relationship you and your daughter have! I love watermelon after a race; I have to agree it is the best!

Congrats on winning the Mother/Daughter! So awesome for the two of you! Great pictures!

Congratulations to both of you! What a great race! Love the pictures!
ice cold watermelon...mmmmm :)

Congratulations! Loved seeing all your pictures and so glad you won the M/D prize!!

Way to go! I really enjoyed reading your race exploit! Heat and humidity will make even the shortest run feel like a marathon! First time visiting but will be back for motivation!

Congratulations on winning the M/D division!!! How wonderful for the two of you to run together. Try to stay cool.

Awwesome! You are so lucky that you daughter is a runner & that you two can run together!!!

Congrats on your win! You did great - heat is tough to run in.

Congrats on a great race to both of you! And winning the M/D group award! I am so jealous of your shared love of running together :) My mom though is great at being my sherpa :)
It looked HOT out there - great job ladies!

Congrats to you both! AWESOME! I love that you are able to race with your daughter!

What a FUN race, it looks like you're eeking out as much fun as possible from your trip. Congrats to Em, what a super job! You did well too, yikes it looks hot there!
I can't wait to hear more about your fun...thanks for sharing!

congrats to both of you! getting 3rd in age group is outstanding! (even if they were short sighted enough to not give out 3rd place awards!) High Five!

Congrats to the both of you! Sounds like a great race all the way around and I really enjoyed all of your pics!

That is awesome. Congrats to you both! Speedy family for sure. I'd love to enter a mother daughter race sometime that would be so fun.

I totally felt the earthquake...crazy!

I read 5.7 with the epicenter in Brampton, Ont.

BTW...I would totally love to meet up with you too! I agree that we are probably not that far from each other geographically. We need to set that up some time :)