My Turn to Spectate

When I first started racing I had great spectators in my family and friends.  I can remember their huge enthusiasm and support at my first marathon!  Emily made me feel like I had won the Olympic gold medal. So I love it when I get to return some of that great support.  So here is my recap from Sunday.


Up at 3:30 a.m. Sunday morning  to head to Em's triathlon.  The transition area closes at 5:30 so all must be completely done and ready before then.  The taxi is called and will be picking us up at 4:15. We get ready but no taxi comes so out we go on the dark DC streets to hail a taxi.  There are people and cars and activity at 4:15 in the morning??? I'm not at home in Vermont that is for sure.

We get a taxi and head over toward the Lincoln Memorial. The driver wants to know what we are going there for. Fair question.  It is soon obvious as we arrive to see masses of athletes, shuttle buses and the loudspeaker blaring instructions even though it is still dark. Em heads into the transition zone and I wait for her outside.  Once she is all set she wonders if it will be light before she has to swim. She is really hoping not to be able to see anything in those waters.  Ignorance is truly bliss. 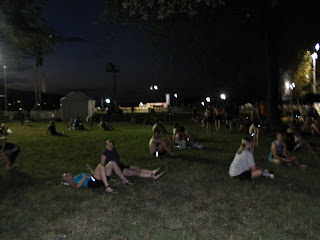 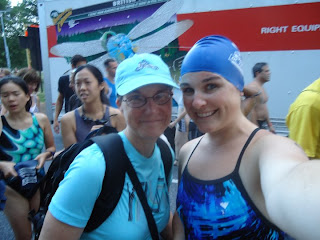 Just before the swim!
Em headed to her wave for the swim start and I went down to the water to watch other swimmers. We had decided there wouldn't be time for me to watch her and get to the bike portion.  Plus in reality I wouldn't know who she was or really see her.  If I had had more time I would have watched for awhile because I was fascinated. I was particularly interested in watching some men who didn't seem able to swim.  They would swim a few strokes and head to the shore and hold on. Some were also hanging onto the skiboats that were out there to assist swimmers if needed. Are there penalties for that?  I was worried about these men. They had not gotten anywhere near the part where you head out into the river away from the shore. I couldn't imagine they could do it and suspect there were many DNFs.
I took off and headed to the Washington Monument to catch the bike.  I found my spot and had just reached for the camera when I heard, "Hey Mom!"  Wow!  How did she get here so fast?  She looked great and was ahead of her prediction! So I woo hooed, watched her round the corner and took off down Constitution Avenue to figure out where to watch the running. There was a spot where runners went by before the finish so I should be able to catch her twice. It was very easy to see. I was on the shaded side and could see the runners coming for a  long time. It seemed forever before any women came but I reminded myself that the women started well after the men and then in many different waves. I had started my stopwatch near the time Em started and was able to gauge when she would be coming.  Not too many women had gone by when I saw her turquoise shirt and recognized her in the distance.  Wow! Was I impressed with her placement!  I didn't remember that there were women who started behind her who could still beat her but regardless....Wow! 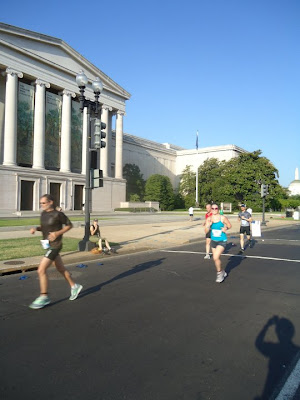 One of the first women I saw was my Emily!

I head to the finish which I am almost at, find a great spot and wait for Em.  One thing about all the waves is there seems to be plenty of room to watch.  Before I know it she is coming in and has a great time.  She goes and gets her receipt which tells her she may be third in her age group and to wait around for the award ceremony.  It turns out she is in fact third in her age group out of 166.  She was 9/523 women - TOP TEN!  She was 97 out of 1136 overall.  Amazing! I am so proud of her! 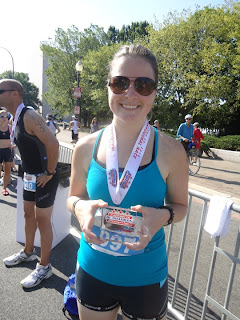 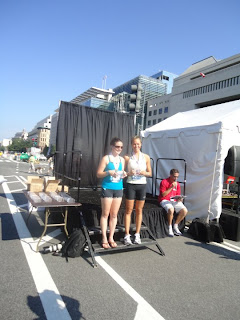 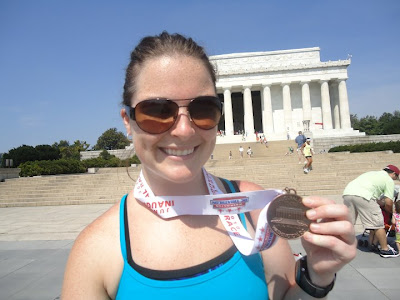 Lincoln Medal in front of Lincoln Memorial on the way home 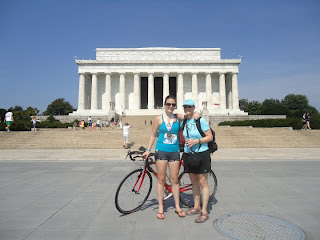 With her proud mother!
What a weekend! So glad I could be here to see it and share it with Emily.
Posted by ajh at 9:36 PM

It sounds like a great weekend! Way to go Em!! She is having a heck of a running season and she does just as well with the Tris! I think that it is wonderful that you were there to cheer her on! We all need that family support:)

You must have been so proud and had such a wonderful time! Congrats to Em!

Congratulations!!! I know you were proud of her - what an awesome day for you both!

That is so good! Congratulations! Placing that well in a tri is awesome.

About my shoes, I've been tested, checked, videotaped and all that. Result is always I need a neutral shoe. I'll take some time and fit various and probably stay with the same and some cutting.

That's so awesome! It sounds like a great event!

My goodness! That is SO IMPRESSIVE!!! I can't imagine how proud you are of her! hmmmm is there a triathalon in your future??? :)

First off, love the new pic at the top!
And, so very cool you and Emily are bound by your love of racing :) It is fun to be a spectator!

I know when I swam and ran track in high school and college, my mom was at as many of those meets as she could and it was so great to have her there...definitely one of my greatest memories. Now my kiddos are entering high school and I am so excited to go to twin #1's cross country meets and twin #2's band concerts...will be very special moments for me, as I'm sure this was for you! Congrats to Em, what an amazing athlete she is!

I have always volunteered, or been a racer. Tomorrow, at Philly Tri, I will truly spectate for the first time.

On another note, my mom comes to almost all my races and I would not have it any other way!

I grinned from ear to ear as I was reading. :) How exciting - for both of you! Thanks for sharing the details of an awesome day and congrats to Emily! Yay!! Great placement!

p.s. ~ hope my mom or other family members will eventually make it to one of my events. to date, only hubs, my diehard cheerleader! LOL

Sounds like a great day for a proud Mom - nice job by Emily!

Great event. Congrats to Emily and, of course, the proud mom.