A "Non Race" Makes Me A Running Lover Again 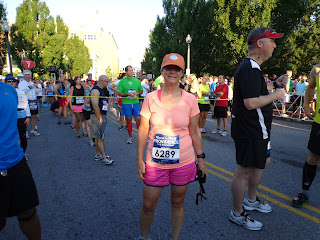 Before the start.. wearing a new shirt, hat and shorts.  Didn't
seem to bother me! 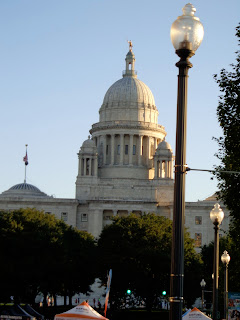 Nice spot to begin and end. 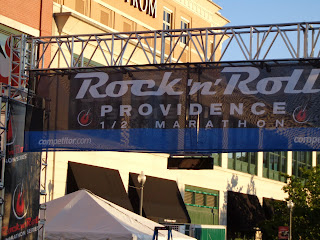 Pluses and Minuses
+ I said I wasn't going to race this race and I didn't!  I ran at a very respectable pace and had a great time. I never got exhausted or got that just can't wait for it to be done.  I even picked it up a bit the last 3 miles. All of my miles were in the 10s with the fastest being 10:12 (the first no surprise) and the slowest being 10:50.
+ Yes, it was a PW but I'm okay with that. I ran it in 2:20 with my previous slowest being 2:12. But like I said I didn't plan to race it. I could have tried and gotten discouraged and more tired than I want to be before next weekend. Instead I enjoyed the race IMMENSELY. I came into this feeling burned out on halves and not at all excited about doing one.  It may really be that I was burned out on long runs since most of mine have had issues mainly GI and chaffing.  No fun!  I was even thinking I might be done with longer runs and races.  Not after today!  Everyone should have that much fun in a race!
+ It was well organized.  I always always appreciate a well organized race. 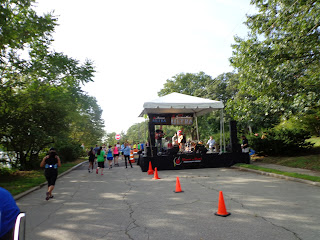 One of the bands.....they were every mile........... a pretty clear
indicator another mile was passed!
-There was a band every mile but they were nothing special. Some sounded like they were doing funeral dirges rather than something peppy.  The one band that really pumped me up was at Mile 8 playing the Monkees  - "I'm  a Believer"  That was fun! It was a nice distraction from the running so maybe this should be a plus and a minus.
+ Favorite sign - It takes balls to be a runner. All the other sports just play with them.
+ Gorgeous day - great spectators - large race with lots of positive vibes 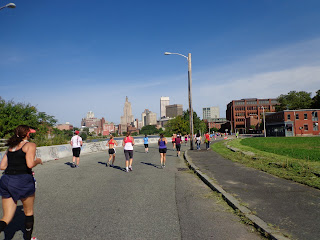 This is on the last stretch. 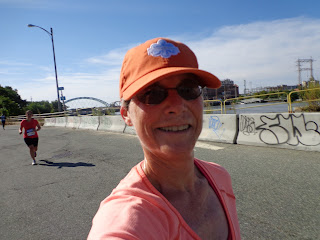 A quick self portrait  along the way.
+ Nice location - most of the race went through the city of Providence which I don't know at all.  We went on lots of cute streets through very pleasant neighborhoods. Some of it was along the water with a small part being a little sketchy - or it would be alone at night.  I think we went near where I ended when I rode on the bike path from Bristol last year. 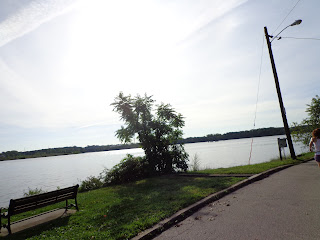 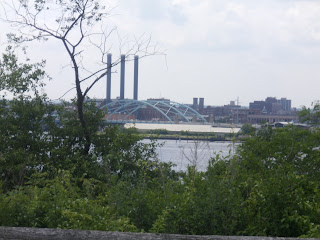 This is from last year on the bike path.  We ran right next to
these bridges today.
+ Lots of aid stations - mostly well stocked, gus, lots of medical tents along the way
+Cold, cold chocolate milk at the end - this was spectacular!
+ I like the shirt, the medal is okay but some of the other rock and roll medals seem to be more fun. 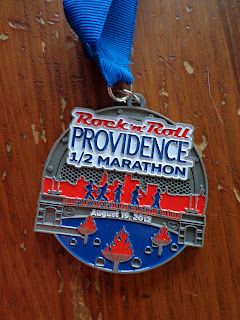 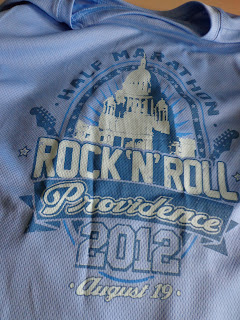 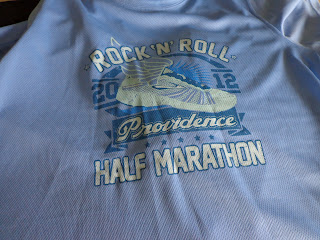 +++++ I loved it and for today I loved being a runner again! 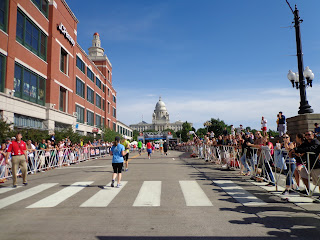 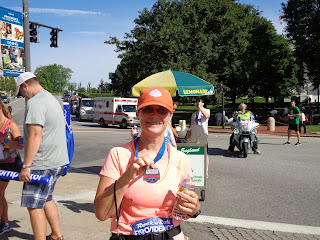 Done!
BUT!
That wasn't the only good part of my weekend.  I stayed with my cousin who lives close by in Mass.  We didn't grow up together, we lived in different states and she was older than I was.  But we have become friendly as adults even though we don't see each other much.  I LOVED staying there and spending time with her.  We didn't do a lot - but that wasn't what mattered.  It was just great to have the time to reconnect.  We agreed our mothers would both be so pleased the two of us are friends and stay in touch.  She had everything all set up for me to get ready this morning.  The best thing was the coffee.  Just regular coffee with cinnamon in the filter.  Unbelievable.  So so so good! 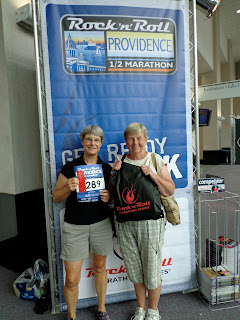 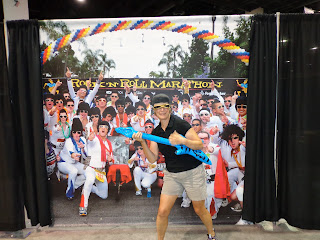 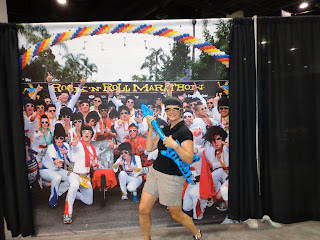 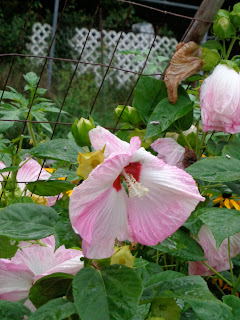 From the gardens at Deb's house. I love the tin
man a friend made her. 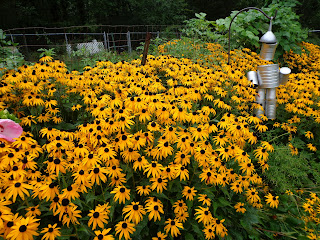 Did anything rock your weekend or is there something coming up before summer ends that you can't wait for?

My weekend was low-keyed and lazy. Just stayed home and goofed around in the kitchen. But it was good. I started work last week, so two days of doing nothing much was much welcomed.

Sounds like a WONDERFUL weekend! I had a decent run Saturday where I didn't feel like I wanted to die. And then I met a friend to mountain bike today, which was pretty wonderful. :)

We had a relaxing weekend with family & friends. So glad your weekend with your prima was nice & that you had a nice race, pre-tri. One more week!

You posing with the guitar in the pictures is awesome :). Fun races are great sometimes. For me, they teach me that racing isn't all about pace and these things are actually...enjoyable! :)

I can't believe summer's almost over...we all start back to school tomorrow - bleh!

I remember watching the Monkees when I was a kid. Boy, its nice to read about familiar things from the past.

You know, a lot of us should slow down and enjoy these races. Then they would truly be fun.

That is so awesome that you got to spend time with family.

WOW!!! A great weekend (and you make a great Elvis - LOL)! Glad you got your running mojo back, too...

We just moved our daughter out to her dorm (and my son is still in CA) so my weekend was a little bit weird. Our house is pseudo-empty-nest now.

Glad you are still a runner (and a cyclist and a swimmer). You are very well rounded! You also look lovely in your new racing ensemble - very nicely put together! The Black-eyed Susies are stunning! It inspires me to get my perennial garden whipped back into shape next year!!!

Sounds like such a fun weekend. Good company and a great race. I'm glad you've got your running mojo back.

Glad you love running again! (I never doubted you.) I did a jailhouse ROCK 5k this weekend.

You asked about the distances for my upcoming tri: 3.1 mile hilly run (partly trail), 10 mile hilly bike, 400m serpentine pool swim (out and back in each lane, then over a lane until you work your way across the pool). In that order (reverse)

Beautiful race, beautiful scenery, beautiful t-shirt, beautiful medal and beautiful pictures.
It's hard to decide not to race .... a race but you did! Congrats. It's more difficult to slow ourselves than pushing.

Sounds like a fantastic race Andrea. I'm happy you had so much fun.

I've only done one RNR and I wasn't wowed by the bands either. Shouldn't that be their speciality!?? LOL at the possible lice hat, though I hope you're lice-free. Glad you enjoyed yourself both in the race and with your cousin!

This report made me excited for your half this Sunday! I am going to try to run well but if I am not 'feeling it' then I'll just relax and enjoy myself. :)