I Just Don't Get It

"Yes, keep my body up especially my legs."
Lock your knees and kick near the top of the water.
Put your legs closer together and kick near the top of the water.
Use your legs to power down the lane.
Your legs are your strength in swimming.
Try practicing with the kick board.
Kick hard powering with those legs.
Sounds easy but..........!  Shouldn't I have some strength in my legs from all the running I do?  It doesn't seem to be transferring to the pool.  I was ready to quit 10 minutes into my lesson.  He had us doing this streamline thing kicking down the lane and not using our arms.  Really?  You want  a drowning today?  I COULD NOT DO IT.  I had to use my arms some and even then I sucked!  I had to pause - okay stop - and rest after every length.  The instructor quickly saw the "writing on the wall" and had me doing different things than everyone else. I was so tired after each and every lap. I had to stop and regroup every time.  I was having a hard time getting to the end of the  lane each and every time.  Will this seriously get easier?  I thought I was doing better but man I am not. Now I question my ability to complete the distance - at least using the free style.


My son talked me down off the cliff. I called him as soon as I was in my car.  He really berated me for being so discouraged so quickly.  He told me I need to give it more time. I had already decided I would give it four times.  Then I would go the private lesson route.  I may do that anyway. I will see.  I think I was most discouraged by two things. I can't keep my damn legs up and I was so tired.  The instructor told me he could see some improvement and my pace was faster.  Really?  I felt like the kiddos in my class who at times just don't get it.  I can explain something in several ways and nothing brings the concept home.  It is actually good for me to experience this and get an inkling of how they feel.  And just like with them it isn't for lack of effort.

But I did visit Jameson and have some Jax snuggle time so that was very positive! 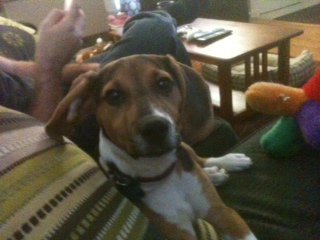 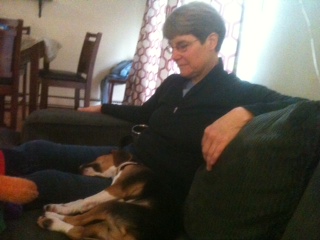 Sometimes is good for the teacher to be the student. I know you can do it!! Good Luck!!

If it makes you feel any better, I am not a speedy kicker either. If we are just kicking, it feels like it takes me 8 years to get from one end to the other. Hang in there!

Wow, this is one of your first lessons? Brutal, but your teach is pushing you. Swimming isn't always easy until you get the hang of it and honestly, don't lock your knees...use your hips...but don't tell him I told you! Good Luck.

Oh, I am SO SORRY Andrea, but I had to laugh when I was reading this - only because, if I were there, *I* would be the "special needs" person who had to be separated from everyone else with remedial drills. LOL! Sorry - putting some extra creative words in your mouth but I am just envisioning myself in that scenario. BTW - I can't swim AT. ALL. Give me some noodles and I am a happy camper in the water. Or clinging helplessly and in a state of panic to the edge. I hope you will forgive my laughter. :-) Jax just keeps getting cuter and cuter - he's probably happy he hasn't been stalked by your kitties lately???!!!
K

Swimming is tough. And I am not a good swimmer at all. But I think it has to do with our "habit" when it comes to swimming. I have a habit of not breathing like I should be when I am swimming and couple that with fear, it really impedes on the learning process.

You may not see it yourself since we are usually our worst harshest critic, but you may actually have made progress like the instructor said. :) Have a little faith. And kick harder. Swim stronger!

Wow! Swimming is really tough, I agree. There is constant resistance from every direction. Was it difficult when you first started running? Did you give up? No! You'll build up your abilities as you stick with it. I know you'll be amazing at this! You are such an inspiration :)

And that little puppy could give my Bentley a run for his money in the most-adorable-dog category!

I'm sorry you had such a frustrating first lesson. Jameson is so right. Be patient with yourself...give yourself time for it all to kick in. Seriously. I'm an ok swimmer and have been swimming for my whole life; well, I've known how to swim...you know how it is..."swimming" kind of consists of hanging out by the pool, or catching your kids 1000000 times as they jump off the side. Anyway, when I started trying to swim laps, it was awful. I couldn't do rotary breathing, I couldn't put my face in the water...felt like I was drowning. Eventually, though, I started feeling more comfortable in the water. You have too, I've heard it in your previous posts about swimming.

This new stuff will start to feel more natural, too. Give it time. And if it isn't kicking in after a few classes, go ahead and spring for a few private lessons. But relax (I know, easy for me to say)...you just have to be able to not drown for your tri...anything more is gravy. :)

I love that it's your son giving you the pep talk. Didn't that used to be our role in life. Things have come full circle.

It's hard to learn something new. But you're a determined lady and you'll get there.

Don't be discouraged! Swimming is REALLY tough! You'll get the hang of it! Supposedly, one day it all just clicks...I'm still waiting for that moment!

Swimming is one of those sports that it just takes a lot of consistent practicing before it gets easier. It does not come naturally to us as adults! Don't be discouraged, you are making great progress!

Yes, don't get discouraged! It takes a long time to get really efficient. And I can tell you, runners make the worst kickers out there! I am a terrible kicker. Keep plugging away and you'll get there.

When I saw your fb post about running because you could, I thought it had something to do with swimming. Guess why I am not trying to do freestyle.
But I think that just maybe you are too hard on yourself. It does take time. And private lessons are not a bad idea.
Some of my friends swear by this book (there is also a DVD and youtube clips under the same titile) http://www.amazon.com/Total-Immersion-Revolutionary-Better-Faster/dp/0743253434/ref=sr_1_1?s=books&ie=UTF8&qid=1326663678&sr=1-1
Good luck. You have to do well so I can follow in your footsteps (well, maybe in this case it is not footsteps, what would that be???).

You know I have no sage advice. I'm sorry this was so frustrating for you. I love what Kate said. I'm sure itll all come together and get much easier. I give you all the credit in the world for taking the plunge!

I have to admit I am glad this is "normal"! When I have tried swimming in the past I am exhausted after barely 1-length of the pool. But in my head I think -- I should have great stamina! Obviously I don't have any tips or advice but I am sure the instructor will help you improve tremendously and you will feel more dolphin-like :) hang in there!

I struggled a LOT with kicking when I started swimming. It is still my weakness, despite having strong legs (you would think) from running. It's all about technique and not strength, unfortunately.

My legs naturally drop/drag and I swim much faster when I use the pull buoy and swim with arms only. It should not be that way, so I am continuing to work on it.

Have you tried fins (flippers)? They will help force your legs to kick correctly and build kicking strength/technique.

As long as you don't drown...you wil do a tri lol I give you a lot of guts fr attempting thisn

with swimming, i always feel like learning new concepts or making changes is SUCH a mess, and it feels awful and wrong and then suddenly one day it clicks. stick with it!