We had great weather here this weekend for running.  What I call great weather may not meet your criteria but in the low 30s with no wind was quite nice!  Saturday was supposed to be super icy and I wasn't sure if it would be safe to go out.  But there was just a crunchy snow and not much of it.  I attempted a pace run and I was going for under 10.  Well, I didn't hit it but I still felt good because it was a heck of a lot faster than anything else I have been running outside.  (I had a killer tempo run on the TM the other day.)  It was just a 3 mile pace but I pushed it for the six I ran.  Miles 1, 2 and 4 were very slightly over 10.  Miles 1,2 and 3 are a gradual uphill with the next 3 being the opposite as it is an out and back.  Mile 3 was almost at 11 and mile 5 was in the mid 10s.  Mile 6 was well over 11 so you can see I was all over the place but there were 4 miles I considered quite decent!  I felt great. I had gotten up and was running by about 6:20 because I had to get to a dentist appointment due to a broken tooth.

So Saturday started out great but then went downhill.  I went to the dentist to find out my crown cannot be glued back in as so little of the tooth was left. I was not shocked as I could tell that.  The options were not great mainly because we are talking major dollars.  I need to figure out how to best time it so to make maximum use of insurance (not a lot) or flex money.  It may not work but I'll make the effort.

Then I went to school and worked on report cards for 3 hours plus.  I got a lot done but it wasn't my first choice for what I wanted to be doing.  But I am a bit overwhelmed at work right now and even with the time spent Sat. I will have a lot of late nights over the next two weeks.  The thing that always stresses me is fitting in my workouts along with all the work stuff.  But it will happen. I think I have this week figured out at least for workouts.

Then I left school and bought the needed items for my colonoscopy prep. Joy.  But that isn't for another week. It was just the thinking about it. Yuck.

Then I came home, headed to bed with my computer and a book and relaxed! 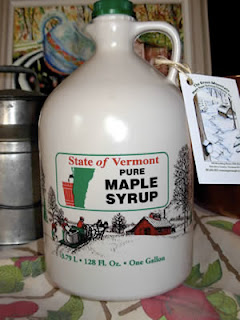 Later my husband and I went to a sugarhouse so he could get some new syrup. As in just boiled!  When we got there we got a sample of it - still warm.  Talk about satisfying my sweet tooth!  It was outstanding. This particular sugar house is owned by a former student of mine.  If I had favorites (which of course I don't) he would be my all time favorite student - just a terrific kid who has become a great young man who makes incredible maple syrup! The trip was worth the smell alone - I could have stayed in that sugar house for hours.

It's snowing and looking like winter, a great ending to the weekend.
Posted by ajh at 5:58 PM

I feel your pain on the tooth. I have one that will need to be pulled in the front at some point. The options are implant or bridge, either of which is super expensive, so I'm hanging onto the real thing as long as I can. Bleh. I hate dental stuff.

Your running weather was much like ours today. Low 30's, but not windy at all and just beautiful. I hope your school stuff goes easier and quicker than you expect so you can relax and enjoy your training time more too!

Is that the packaging? Because I bought some of that packaging before! I don't remember if I bought it online or at TJ Maxx, but it was that packaging. I love maple yrup, candy and cream!

Sugar house - the phrase evokes images of Hansel and Gretel. It must have smelt divine and maybe the smell alone would have been enough to induce a diabetic coma.

Sorry to hear about your tooth news. I firmly believe that teeth were the one thing that God got wrong when he was making us. He needed to make ones that would grow back or ones that would never rot or stain.

We actually had some great weather this weekend...aside from the wind. Was 60 degrees for my race today :).

Sorry about the dentist, never ever fun!

I am so sorry to hear about the tooth - and the expense to fix it. That really sucks.

Hang in there with the work stress - luckily you have some delicious fresh maple syrup to sweeten your days...

Just finished "Little Children" by Tom Perrota - have you read this?

Great runs! Nothing beats outdoor activities. Yes, we need gyms but being outside rocks.
Hope this week will be a peaceful for you.

I have a few crowns too and my biggest fear is that they break and can't put back because insurance doesn't cover that anymore here.

It's looking more and more like Spring in this little part of the world and I'm glad. I have had enough of Winter.

We, too, have had some nice weather the past few days. Don't hate us Coloradoans but today is supposed to be mid-60's and tomorrow, around 68.
Yahooooo!!!!!! I am not sure I have had REAL, honest-to-goodness maple syrup but I certainly am prone to like the sound of "sugarhouse". Mmmmm, sugar. It that a GALLON of maple syrup??? Hope the tooth injury gets resolved quickly and yikes, a colonoscopy - such fun you are having!!! :-) Have a great week, despite a few bumps along the way.

I've never heard of such a thing as a 'sugarhouse' before, but it sounds like a place I would like! I love maple syrup anyway. Glad you got a good run in.

Thanks for the blog visit. No sugar houses in Colorado - boo - that sounds amazing!
I've been convinced that I only get to run when it's between 0-20 degrees this winter. Yesterday? 50-60's - I overdressed!! So happy to be sweaty and overheated!

Glad you had good running weather. Ours wasn't terrible either =).

Glad the runs went well!
This is the first time that I hear of a sugarhouse, but it sounds interesting.
Here at last it's spring, warm sunny and the environment full of colors .... but I am under the cover with the flu!