Shamrock Shuffle 5K and the bike leaves the barn 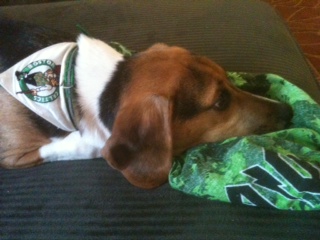 First, Jaxon wants to say Happy St. Patrick's Day!
He's a little sad he isn't going to be racing with us.


There were about 40 people running in this race.  T and I were easily the oldest runners by far.  Once we started racing I thought this would be good practice for my triathlon as I thought I  would be last.  I didn't think anyone was behind me and didn't envision passing anyone.  But somewhere near the end of the first mile I passed this guy that by muscles/looks it didn't seem like I should be passing so I fully expected to be passed back.  I never was and ended the race ahead of 5 or 6 people at least so I was worried over something I didn't need to be worrying about. 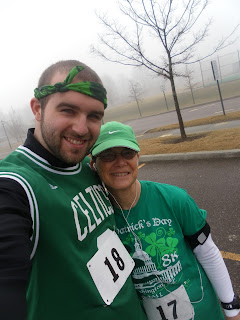 First race of the year with Jameson :)
My mile paces were all over the place.  My first one was very fast (8:13) helped by a downhill and my last one while slow did not get into the 10s(9:48) hindered by an uphill.   It was not an out and back instead doing a turn into the woods to give us some trail running on parts of the second and third miles only to hook back with the bike path we started on to finish most of the third mile.  I felt like I did okay on the hill and my overall pace was 9:04 so I'll take it.  It was my first new race of the year and also my first race of the year with Jameson!

Sunday I had a long run -10 miles -with T. While not fast it was better than some runs have been and I felt good.  The weather was very nice although it warmed up drastically from start to finish. I've decided I need to stop complaining about the unseasonal like temperatures and go with it. So today I enjoyed no snow and a warmish run.  I also got out on my bike for my first ride of the year. I only went about 11 miles because the dirt roads were so soft and hard to ride on.  I did not hurry at all and it felt good to be out there.   Then when I got home before I cleaned up I washed my disgustingly dirty car!  Lots accomplished! 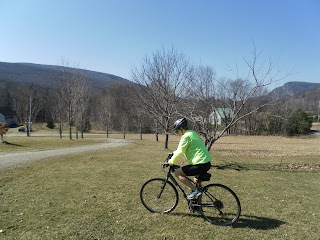 Starting out for the first ride. 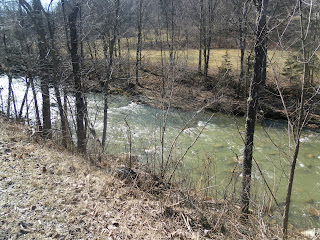 Riding along the river..... 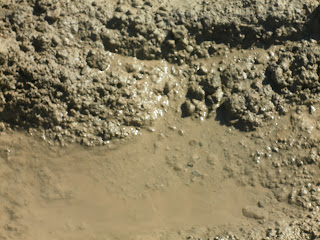 Some of the dirt roads are tricky riding 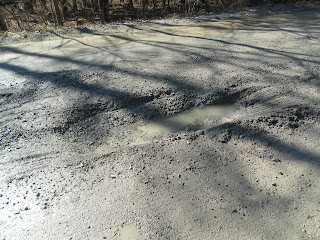 and driving as far as that goes!
Friday when I was in Burlington I looked at road bikes. It was overwhelming! They could have been speaking a different language. So many things to think about.  While there I bought myself a new bike shirt for inspiration to get riding. Must be it worked! 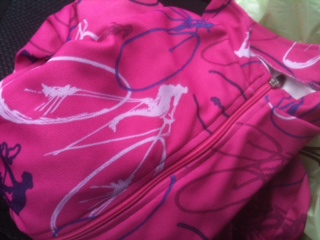 Isn't it pretty!
While in Burlington on Friday I also took Jameson to lunch.  We had a great lunch and then ....yum..... cupcakes after.  The pumpkin one was my favorite. Surprise surprise! 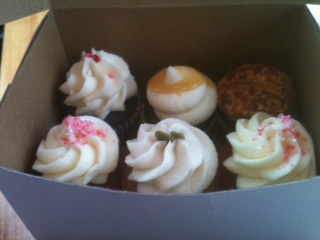 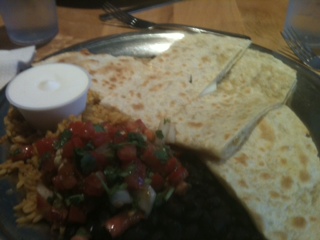 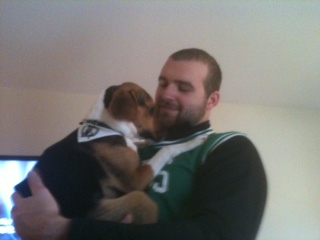 And I'll end the way I began with one more picture of Jax and Jameson. I got to spend a lot of time with both of them this weekend!
Posted by ajh at 8:37 PM

Nice race and ride! Glad you weren't last but a friend of mine that was last at a tri got a police and ambulance escort! That sounds kind of cool.

Jealous of your outdoor ride. I haven't been able to get out there yet.

And yay pictures of Jax!!!!

Great race!
Love the new shirt....so pretty. And cupcakes....YUM! Have a good week.

Only 40 people in the race? That's kinda fun - extra special. That bike shirt is so wonderfully bright. We need some colors out here to help out with this drab weather we're stuck with.

Ahh, isn't it great to get the bike outside where it belongs?
Oh, those cupcakes ... sigh.
May daughter absolutely loves the pictures of Jax.

Those smaller races really make it easy to be last! I had a couple last year where I was almost that person.

Yea for getting the bike out! Road bike shopping IS overwhelming. I still don't know very much. Keep going to stores and asking questions...and definitely ride a LOT of bikes. As you do, some of what they're telling you will make more sense and you'll start to get a feel for differences.

Wow - you had a great weekend!

You certainly had a great weekend! Awesome 5k, well done! Yay for getting out on your bike. I can imagine looking at road bikes and hearing all the talk can be daunting. Have a super week!

That's a really cute bike shirt. It should be all the inspiration that you need.

Pumpkin cupcakes sound interesting. I do pumpkin scones that have golden syrup and nutmeg in them and they're delicious. I bet pumpkin cupcakes taste amazing.

Re your comment - I'll definitely be keeping both dresses. I shouldn't have to go dress shopping for at least another decade (as long as I don't change size)

Jaxon is adorable as always, the last pic is great.

And woohoo for the first bike ride of the season! Happy for you you could go out on your bike.

I am so loving the weather we are having! I'm slow so I have given up worrying about where I will be in races. Give up the worry makes racing way more fun.

Yay for outside running, new bike shirt, and yummy cupcakes!

Jaxon is so freagin' cute!!!

Look at you speeding past people! haha That's awesome.

Mmm cupcakes. Hooray for riding! I've tried to buy a road bike a couple of times but always get overwhelmed by the options and all.

Congratulations on your race!!! Jax is soooo cute! I will be at Cherry Blossom spectating and taking pictures! I will be on the lookout for you! ;)

What a great weekend!

Congrats on your race! Always fun to race with family and friends, glad you got to spend time with your son.

I love your green shirt!!! Congrats on your race!

Looks like a lovely weekend, with a nice mix of shopping, good food, racing, CYCLING OUTDOORS (me too!!!), family and puppies!

Yeah! for celebrating St. Pattys Day with a run. I wish I did.

Are those "my little cupcakes"? I love those!!!

Re: your wet suit question. I have both sleeved and sleeveless but haven't had occasion to use the sleeveless yet. I bought it for NOLA 70.3 and figured I would wear it if the water was pretty warm (the swim was cancelled). I get cold pretty easy, so in cold water I really like having full sleeves. I haven't experienced any constriction problems, but I'm not very muscular either.

If you watch the xterra website, they have 50 and 60% off sales quite often.

A great week end. Only 40 in that race?
Now, after having read this nice post where you wrote to be the oldest, I have to confess that, in the pictures that I put in my last post, I am the oldest of the group.