This post is about top things about my races.  It was fun to do and I invite anyone who wants to do their own, changing it as you desire. I got the idea from Darlene at My First 5K.  Thanks, Darlene.
I’ve run a total of 174 races
**Most Fun Race — 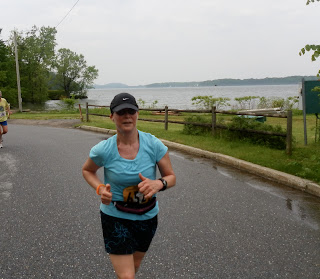 This is hard and it isn't hard.  I have run so many fun races but Vermont City Marathon is always the best.  It could be because it is my hometown race.  I always see people I know cheering for the runners, generally my family is running in it too and the Burlington bike path is one of my favorite places to run.  My favorite VCM was my first one which was also my first marathon. I loved that race so much. I had so much support at the race!  My family was there and co workers came too.  I had a huge smile of my face for a lot of the race.  I was great at finding my supporters in the crowd before they saw me!  When I finished I felt so accomplished!  Who ever thought I would run a marathon!
**Most Difficult Race — 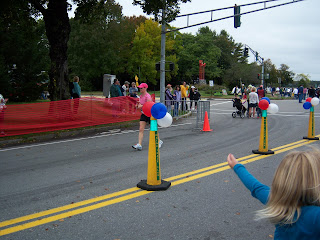 My most difficult race was my fifth and at this time last marathon in 2009, Portland Marathon (Maine not Oregon.)    I had high hopes for that race and they didn't happen.  I trained well, the weather was  a little hot but not terrible,  I just didn't have it that day.  I had to readjust my goal as I was running many times from BQ to PR to less than 4:30 to just keep running and don't walk.  I fell hard at about the half way point and it was embarrassing but it didn't hurt me.  I ended up taking about 18 minutes longer than the year before.  My husband was at the finish line getting very worried. I knew I would finish I just didn't know when.  Ironically I won an age group prize. I was 2/10 in my age group. It was a nice water color with a plaque that they mailed to me.  I never considered that I got a prize so I never even checked.  I didn't plan for it to be the end of my marathons but the next year I was injured and then I turned my attention to the duathlon last year and this year heaven help me a triathlon.  I may get back to it but I am really enjoying halves for now.
**Most Scenic Race — 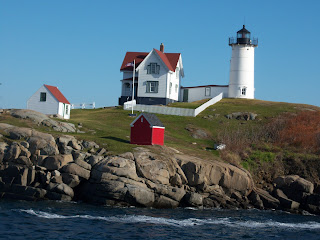 Familiar shot on my blog but this is in the fall 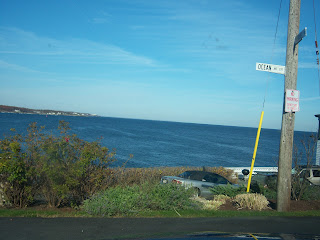 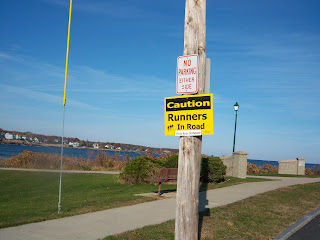 This is a tough one. I think I have run quite a few scenic races and it is no secret that I particularly like racing on the ocean. I think the nicest one was the All Women and One Lucky Guy half in York, Maine which is where I often run and post pictures of.  I have only done one race there but I now use some of that route as my "regular" running route when I am there because it was so beautiful.  They have now moved the race to Mass. and while I am sure it is fine I can't believe it is anywhere as scenic as this coastal race was.  The year I ran it I had recently had surgery and had not been running so it was my slowest half but I loved it.  (I did have my doctor's permission to run it.)
**Most Boring Race —
I checked all my races really. I have not run boring races.  So none here!
**Best Post Race Party — 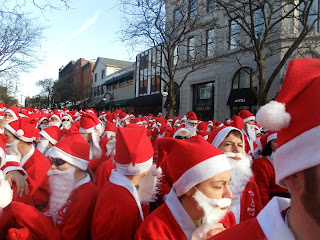 The best post race party I will give to the Santa 5K in Burlington last year.  Good food, tons of people, in a bar if you felt like having a drink.  Over all a great time.
**Most “Nostalgic” Race — 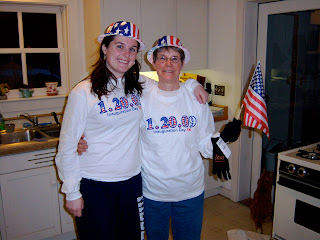 Hmm.  I can't say that i have run races that have a nostalgic feel to them.  I decided I would go with the Inauguration 5K that I ran with Emily in 2009.  It was following the election of 2008 of course and was out with the old and in with the new.  When  I signed us up for it I was looking for a Feb. race and it sounded fun. But I got Dartmouth and Durham NH mixed up so it was MUCH FARTHER (3 1/2 hours) than I anticipated especially for a 5K.  It may have been the coldest race I ever raced in, if not it was right up there.  But the cold may have spurred me on as I had a great time  (26:14) and Emily and I won many prizes, both age groups and random.  We were both third in our age groups.  Plus we got our names in New England Runner - always a huge thrill for me. I may need to see if they have a repeat of this race next year.  Would Em come up from DC to race it with me?  They also gave prizes for anyone with the middle name of Walker, top three runners named George and Laura and the best presidential costume.  Part of my nostalgia might be for when Emily lived here and was game to do races with me at the drop of a hat.
**Best “Feeling of Accomplishment” Race —
I have many races where I felt quite accomplished beginning with my walking races where I actually won some to my first marathon. But I am going to choose the Mad Dash in 2003when I unexpectedly ran it having never run a step beforehand. So why did I run?  Well, it was a race but a "fun" walk and I hate fun things where there is no competition.  So I had registered as a runner but with plans to walk it. But at the last minute - when in line at the start - I thought what the heck I might as well try running and see what I can do. I ran the whole 4 miles!!! I can remember being amazed at the end and talking with the girl who came in near me. It was her first race.  I called people on the way home who didn't believe I RAN it!  The most amazing thing was I won an award in my age group. No wonder I think age groups rock!  It was a four miler on roads and trails and I did it in 39:23. I got a medal and believe me I was hooked!
Most Fun Thing Done Racing (to replace boring race)
This also started when I was a walker not a runner. I was doing races and reading Runner's World when I read an article about a guy who ran home from every Metro stop in DC. When he did the last one his wife had a finishing tape on the porch for him.  I love things like this and brainstormed what goal I could set for myself. I ended up doing a race in every county in Vermont (14).  It was fun. My husband would go with me to the farther counties to see more parts of the state.  The most northeastern county is very small and not very populated and I could never find a race there. So I made my own. We drove up one Saturday and found a dirt road around a lake that looked good.  But I quickly discovered when I packed my "race bag" I had brought two left shoes.  Umm. I couldn't tell my husband I wasn't going to do it so of course I put them on  and ran in them.  It was awkward but doable. He would go ahead of me in the car and stop and take pictures. We took a picture near the county line sign to prove that I had done this county. I did not do it as my last county as I wanted that race to be more special.  For a person who likes lists, checking things off and doing new races this was a very fun goal.  At my last race I won maple syrup and extremely delicious bread!  Yum!  A great ending.
Posted by ajh at 8:25 PM

What a fun post!! I absolutely LOVE the last one. I love that your husband bought into it and shared the experience with you, and I love that you ran in two left shoes!!

Oh goodness, you would not be calling me hardcore if you had seen me in the second half of that bike ride. I wanted to curl up and die. If Sarah ever wants to ride with me I'll be surprised. Ugh. And Sunday's run was plenty slow...but so fun. Next weekend...maybe taking pictures of my friends in a trail half marathon, maybe some running...nothing specific planned unless the spirit to actually train for this 50k instead of throw in the towel strikes me (most unlikely, truly. You heard it here first)

Wow you have done a lot of races! How cool! always love your pictures.

That lighthouse is really quite breathtaking.

I had no idea you ran the Portland marathon! Have any plans to come out west again?

How on earth did you manage running in two left shoes? That's an incredible achievement. You're my running hero.

Like Char, I am most impressed by running in two left shoes - I can't even imagine how you did that! Very cool list and quite impressive list of races!

This was very fun to read Andrea. You have a lot accomplished already.

Good stuff. Some of those would be hard for me to figure out just because of time passing.

I love this idea for a post. I will be stealing it.

I particularly love the county race goal. My husband is a county counter, so he'd be all over that LOL.

Hahaha, when I read that the first time I could have sworn it said Oregon, not Maine =).

Well, then Portland, Oregon should still be on your list!

Are you coming out to Eugene to spectate Emily in May?

Wow you are a racing machine! I don't think I've done half as many as you. And to say none have been boring--lucky you!

Fun idea for a post. You sure have run some memorable races.

I know I've run a lot of races but you have left me in the dust!!! The Maine photos are positively dreamy!

What a beautiful post! Running memories are an important part of our life and we remember places, friends, situations and many other beautiful things of our past.
With this post you did me think about friends, I shared many "adventures" with, who don't run anymore because they are in their 70s and many great "disappeared" wonderful races: Maratona S.Silvestro, La Saracena, 3Ville, races well known by the runners over 50.

I enjoyed reading about your race experiences.

This was really fun to read!! 174 races is awseome!! I have no idea how many races I've done; probably a tad over that but I never kept track of them when I raced in my 20s.

I've done a few marathons on the west coast and they are so pretty, but honestly your pictures make the east coast races look even prettier. One day I will have to test that out! :)

I like picturing you running in two left shoes. I would have done the same thing. :)

Good grief, that's a lot of racing! I think that is awesome, I love the feeling of camaraderie at races, whether they are big or small and it always leaves me with a feeling of wanting to do more.

You've had some good ones too. I don't even think I could remember all of mine!