It seems like lately all I preach is biking and swimming I love while doing them but running I love when I am done.  Not today. Today I loved my run!  I caught myself with a wide smile on my face more than once.  When I first got up I was disappointed as there was a fair amount of snow. I had a pace run on the books for today and I had been looking forward to it and part of that anticipation was due to the dry roads.  I didn't even know there was snow in the forecast so I was rather surprised. 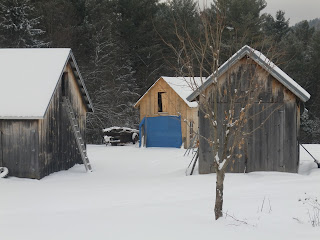 I resigned myself to wearing my Yak Trax for the second time this year and just dealing with it.  But by the time I left I was fine and did a prepace run dance. It's okay, Michael and Jim, to dance before a pace run and not just a race isn't it?  I was listening to Dixie Chicks sing Ready to Run and it was working. I was on my way to embracing the snow.

I have no shame posting this geeky picture.
Once outside I headed to the road ready to better my last week's pace run. Last weeks was officially a 3 mile pace run according to my training plan and today's pace mileage was 4. Both weeks I was running 6 with the concentration being on the lesser amount but keeping a faster pace up for the whole run.  Last week I was pleased with my efforts because my runs outside have been so sucky that it was definitely an improvement.  I was shooting to be 10 or under. I was actually slightly over for the 3 miles but I was okay with it. But I knew I could improve this week and was anxious to give it another try.
Can I say again I LOVED this run?  It may have been because of the snow instead of in spite of it.  I have apparently missed my stormy runs.  It was beautiful out although I didn't take my camera because I wanted to concentrate on my pace.  It was slightly snowing which I love and at times a lot of snow would blow on me out of trees. Bliss!  I did not love the wind or slush especially when cars would go by too close and throw a fair amount on me.  Jerks.
I was watching my watch each mile and pleased with the results. Although I didn't have last week's times memorized I knew I was improving them.  I may have thrown a fist pump after Mile 4.  Here are the stats. The first number is last week, the second was from today.
Mile 1    10:07     9:29
Mile 2    10:09     9:52
Mile 3    10:58     10:19
Mile 4    10:06     9:28
Mile 5    10:20     10:07
Mile 6    11:35     10:41
Better, right?  Cause for celebration!  And I am going to improve more especially on that last pesky mile.
There is nothing like a goal that you achieve although the joy in my run today was from enjoying the glorious day and being able to run in my own winter wonderland and fully appreciate and revel in it. 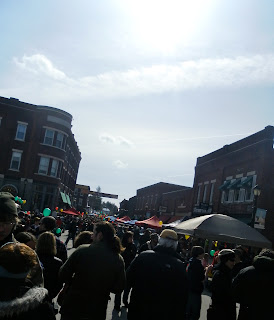 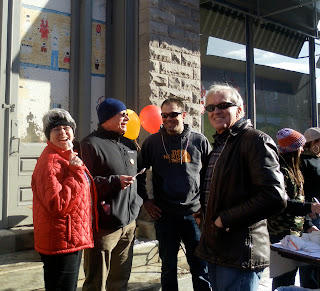 My friends and husband
Saturday afternoon we headed to Middlebury to the Chili Fest which our friends have been to several times but we had never gone.  You pay $3 which goes to a charity (Irene relief this year) and then you sample all the chili.  There were at least 45 vendors and most had several versions of chili. The vendors were restaurants for the most part but anyone can participate.  We got there early which was smart because at that point there were no lines and you could try a lot of chili quickly.  Once you got down into the main part of town (Main Street was closed) it was thick with people and the lines were very long.  So we waited for some but there were many many we never tried. You get 3 tokens and vote for your favorite 3.  My husband voted quickly which makes no sense to me as you have only tried a small amount.  But I have to say going back to leave the token later meant you had to remember where you had that good chili!  There were def. some I didn't like at all!  After we went to one of the restaurants nearby to warm up and have a beer. I was exhausted when I got home! Didn't know food sampling was so tiring!
9 miles today (now Sunday) with T rounded out my exercise for the weekend! 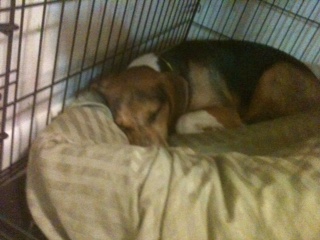 And here is one more picture of Jax.......this is after I picked him up from his Doggy Day Care on Friday.  He was exhausted from playing with all his buddies and went into his kennel to sleep!
Posted by ajh at 7:19 PM

So snowy out there!

Look at that snow! Apparently you're a snow bunny!

Yea for a good pace run! :) I love your dancing picture...you are so fun. :) And I LOVE to run in the snow, though I don't think I ever did it expecting anything of myself other than--run. No really snowy runs this "winter" (if you can call it that).

The chili sampling sounds fun, too. I agree with you about voting so early, but I know I'd forget where my favorites were. What a great day you had!

That puppy is so cute...

I really am lucky to be able to ride all year long. A lot of it is having the people to go with. Once you realize you can do it, it's not bad at all. Of course, yesterday it was glorious. Perfect weather.

I totally did not hold my own. I was at the back of the pack almost the entire time, and I know that Luke said 100 times that doing it on a mountain bike is way harder, but still...a strong rider is a strong rider.

I played basketball in high school, that's it. I never really rode my bike until 2008, and I just hit my 2 year runniversary. I swear, everything I do is based on pure stubbornness, not skill. :) But whatever, I'll take it!

Jax is adorable! Glad you had fun in your winter wonderland!

So glad you had a great run - it made me happy just to read about it!

So many of your fellow countrymen complain about the cold and having to run indoors and here you are loving it! Running in a Winter wonderland!!

wow- look at that snow! (glad we missed it up here..) NICE job on the run and I really love the picture.

Woohoo for a great run! It seems a lot of my blogger running friends had a good one this weekend, always makes me happy.

I have never been to a chili fest (we don't have that here) but would love to go.

And ahhhhhhhh Jax, sweet little puppy. Please say to Jameson I love him for taking such good care of Jaxx and let him go to doggy day care instead of keeping him home every day where he's alone.

So did you enjoy your run? I don't think I caught that?

It can be hard to enjoy snow this late in the season. Glad you are having fun.

And no, I did not go to Athleta.com. I thought I would leave some inventory there for you to browse through. You've earned it!

Crazy to see all that snow when we had such mild weather this weekend. Good for you getting pumped up for the run and improving a LOT over last week!

Great run in the snow! It's been beautiful here, so shocking to see all that snow you have!

Congratulations on your great snow run!

Yay for loving an awesome run! Boo for you having too much snow in March! (I know you love the snow, though). Glad to know that there are jerky drivers in your area, too. It must be the nature of folks everywhere nowadays. Sigh. Jax is still looking as adorable as usual. He looks plum tuckered out! Hey - we might need some kitty advice - we are thinking about possibly adopting one. It's been a long time since I've/We've had a cat. Steve is being a little resistant, though....

Jax is too darn cute, and I think you look adorable in that picture!

Fantastic improvement, but even better to hear how much you enjoyed your run. Great job!

Yay for some paradise miles! You give me hope. Look at all your snow still. My first crocuses are blooming and being eaten by deer.
I noticed RnR Dublin is nowhere to be found. I think they cancelled it...probably cuz we didn't sign up.

Um, yes it's TOTALLY ok to pre-run dance any time you feel like it! It's amazing how it gets you going :)

Snow, wow!! It's going to be 80 degrees here today. Our weather has been so crazy this year....as it has been all across the country I guess.

Love the doggie pic....nothing better than "the puppy ball"

Do you still have snow? Ours was gone by Sunday with this warm weather. Becky and I ran 8 miles Saturday morning and it was COLD!!!

WOW. That is a ton of snow, glad you were still able to get out for an awesome run! (boo for cars throwing slush on you)

I love chili, I could eat the stuff all day, along with a really good, cold beer!

Nice job on your run! I love runs like that!!

I saw your comment about wetsuits from Kurt's blog. Here are my two cents..:) Whether you get a full or sleeveless wetsuit, I think, depends on where you live and what the water temp. is most likely to be. I live in CO, so when our open water areas open up in May, the water is FREEZING and I need a full sleeve wetsuit! Our temps also drop in early fall, so I have to wear the full wetsuit then as well. I also did Ironman Arizona in November, where the water temp. was 60degrees...brrr! So, again, I needed a full wetsuit. BUT, for the majority of the summer, I wear my sleeveless.
Both of my wetsuits are awesome and fit really well. I had a different full wetsuit before I got the 2XU and it just wasn't the right fit and I hated it! So, fit is REALLY important as to how comfortable it will be.
Also, I am not a very fast swimmer, so I wanted all the help I could get. Having a wetsuit just gives me the right amount of help to help me feel competent and somewhat fast in the water! Plus, I know that if I ever panic, which I have done numerous times, I can just roll over onto my back and the wetsuit will keep me afloat!
If you're thinking about getting a 2XU wetsuit, wait for their sales! They have awesome sales all of the time and I was able to get both of my wetsuits for pretty cheap!
I know that was probably a really long answer, but I hope it helped! Let me know if you have any other questions! :)

Oops, I meant my Xterra wetsuits! I have 2XU on the brain b/c I just won a pair of their compression tights! :)

I think that Jax must follow you during your workouts if he doesn't want to fall exhausted.