Hi everyone, this is P, from Adventures of an Average Athlete.  AJH handed me the reins to Age Groups Rock today as part of the Great Big Bloggy Post Exchange - a fun way to meet new (or maybe just new-to-you) bloggers.
Things I've Learned from Wearing Minimalist Shoes
I've been running for almost five years now, and I've spent my fair share of time on the DL list with what felt at times like one injury after another - stress fractures, shin splints, IT band troubles, sciatica, back problems, you name it, I've probably had it.  A few months ago, while taking some time off of running completely, it occured to me that maybe I should make some changes in my running style (ya think?), so I went out and bought a pair of Vibrams.
Now, okay, maybe this would not be the first thing you would think to do, but at the time it made sense to me and so far, it's been working out wonderfully.  I've taken the time to ease into them really, really, REALLY slowly and I'm enjoying one of my longest stretches of injury-free running to date.
Over the course of the last few months, I've noticed that when I wear the Vibrams in public everybody - I'm going to take a moment and type that out again in all caps, with spaces between the letters so you know that I mean E V E R Y B O D Y - has an opinion about my shoes.  Everybody.
When I wear my Vibrams, I sort of feel like a spokesmodel - hahahahahahahahahahahaha!  whooooowheeee, I almost said that one with a straight face! - um, okay, just a spokesperson.  I'm certainly not an expert, and my research has been pretty much limited to reading Born to Run and the Vibrams website (http://www.vibramfivefingers.com/about_vibram_fivefingers/health_wellness.htm, if you're interested).  But these shoes have brought joy back to my running and kept me pain-free so far.  What more could I ask for? 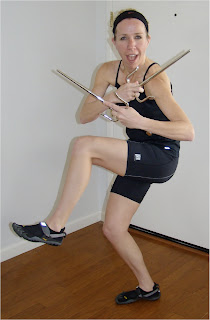 Oh, yeah.  And they totally make me feel like a ninja.
Many, many thanks to AJH for being the hostess with the mostest - did you catch her post over on Jesse's blog (http://www.journeythrulifeblog.com/2011/08/great-big-bloggy-post-exchange.html)??  Good stuff, as always.  Happy running, everyone!
Posted by ajh at 11:55 AM

It took me many, MANY months to realize that minimalist shoes were the cure (one of them) to my heel injury and an orthotic was making my injury worse!!! Loved this - thanks, P, for supporting the minimalist movement :).

AJH: in answer to your question about the other twin - he isn't into climbing mountains as much as Brendan and thus wanted to use his birthday money to attend a high altitude running camp next week with his cross country camp. He's so excited!!! :)

When do you head back to work?

Very cool, and I love the ninja picture. While minimalist shoes aren't for me (at this point...never say never), I'm astonished by the wealth of opinions you get. If it's working for you and bringing you joy, what's it to them? I hope they continue to be the answer for you! :)

Wheeeee! I felt so famous when I saw myself on your blog!! :)

I refuse to get another pair of orthotics that may or may not help my Plantar Fasciitis. I'm currently on the DL with a torn muscle in my foot but am having the Graston Technique done for the PF. I'm also considering the minimalist shoes as well. Even though I've given enough shit to my husband for wearing those ugly things.

I've had basically the same experience, but I don't feel particularly ninja since mine are hot pink LOL. I'd say I feel more like a cartoon character. ;o)

I don't wear minimalist shoes, and I don't know that I ever will, at least I don't know if I ever will perminantly. I know I will eventually try them out. Then again, I've been running for less than a year, so who knows :D

Anyway, to the point, which is, whenever I see someone wearing VFFs, I'm like "OMG that person is a runner and is obviously cool and dedicated!" It's like I'm in instant awe and am seriously impressed.

I'm just thinking everyone says since they started wearing minimalist or went barefoot or whatever they have less injuries. But then they all say they are easing into it. Running a lot less than before and therefore no injuries. I still need to see them running marathon and ultra distances plus the training for that for more than two years without injury before I will say it is any good. Just my logic way of thinking.

I don't think to use the minimalist in the next future. But who knows? However last week I saw some tourists walking in Rome with the Vibrams.

I have a foot injury and for a long time I wrapped my foot with vet-wrap and that made it better. I run in a cheaper pair of trail shoes: Adidas Kanadia TR3(Hmmm. Sounds like an STD. I love them so much I stockpiled 2 more pair. But I am curious about minimalist shoes.