Tuesday I got one more ride in before school started.  I rode on roads I have rarely been on in my life. It was very pleasant - mostly flat and a good temperature. I went with two other people I work with. I was really feeling lazy so I was very glad of how flat it was for the most part.  We ended up riding about 24 miles which was more than I intended to do because I had so much to do.  But it will get done, the ride was worth it.  I am going to miss my ability to do rides at my will. It's going to be hard to find the time now but I am going to try and ride at least a few times a week.  It is also going to be hard to ride to school because of the washed out road but not impossible.  The problem is the road I will have to use has an incredibly steep grade. I am not one to shy away from hills but this one is long and exceedingly steep. I seriously doubt I could ride up it but maybe I will have to give it a try. 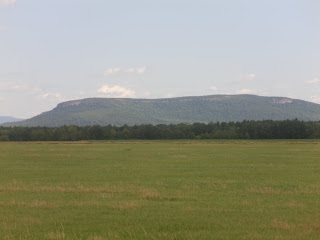 We rode by Snake Mountain. Strangely I had
no desire to hike there. (Although I have a couple
of times without seeing any you know what.) 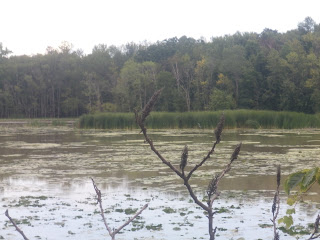 This is close to the lake, there were some herons in here.
Magnify the picture and look between the branches. If I have the bird
wrong just let me know. 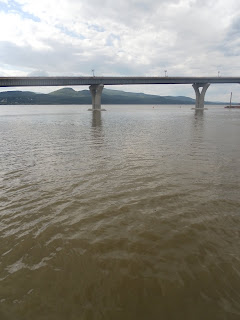 As we were riding we could see Lake Champlain from many spots.  We all exclaimed because it was BROWN.  It is never brown but this was from all the flooded rivers flowing into the lake. 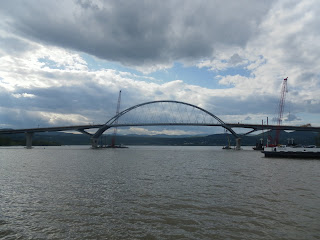 The new bridge is almost done.  The arch was floated down
on barges last week. I would have loved to see it.  My friend, T,
and her husband rode the ferry back and forth many times to see
it.  People were there on both shores (Vermont and New York),
in boats and on the ferry. 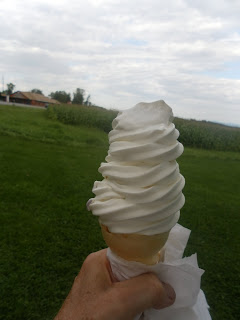 After we rode the ferry back and forth just to ride
it and see the bridge we continued on our way
with one more stop -..........to get a creeme at
Goodies, renown for it's creemes!  While there
I saw several school kids.  I think we impressed
them on our bikes! 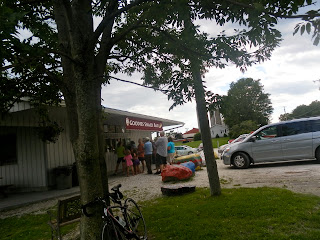 I have a hard time getting my rides done around my work schedule when the days start getting short. I can ride early in the summer before I go, but already I'm noticing later sunrise which doesn't leave a lot of time. I have bike-commuted a few days per week in the past, but my commute also includes a long steep hill and I need a shower after that. Anyway, all that to say, I feel your pain!

Looks like a great ride! Ice cream is even better.

You were in my neighborhood!! I love Goodies

Glad Irene did not affect you too much but bummer about the road.
Those look like herons to me but I am no expert.
Now I want ice cream.

Yum, yum on the creemes!!! Just wondering - do you think any water moccasin snakes could've infiltrated the area with all the flooding??? Just say'in..... Ha, ha - just fooling with you!!! And you've got quads of steel- I bet you can ride up any steep road!!! :-)

Inspired by your cycling exploits, I went for a ride this week. My scenery was nowhere near as gorgeous as yours though. Probably because the exercise bike didn't leave our living room.

I have never heard of a "creemie" before...but I'd totally go on that bike ride if I could get one of those at the end, too!! LOVE soft serve ice cream.

I am so behind on blogs, I apologize...lots of madness going on with my daughter, so sorry...I will catch up on your Irene stuff, I have been thinking of you and all the water you guys endured. WOW!!!

Glad you had a great bike ride, nice close of your Summer vacation. I remember the lake from other photos in the past and it's definitely very brown now.

The first two photos show that you rode through beautiful landscapes.
Here in Italy school starts on Monday, September, 12.
I wouldn't mind to get that creeme :)

Oh my, that creeme looks good! So good. So, so, very good.

Now I know where I'll be stopping after that Vermont 100 one day. Oh my, another motivation to get there!

I'm glad you are still able to ride, but bummer about the commute to school. I hope you tackle the detour hill at least once so you can prove to yourself that you can do it! Get in that granny gear and spin :) ...this is what people tell me to do on hills but I can still barely pedal. I think I am just a weak hill-biker.

I have a feeling that you would surprise yourself and make it up that long hill! I never thought I could do it either until I started doing it. You should give it a try.

YAY for creemies on the bike ride!

I know what you mean about the hills but sometimes they look worse than they really are, maybe try it once and see how it goes. That creeme looks too good - I wanted to reach in and grab it off the computer ;)

I have a feeling you'll sneak it in somehow! And for winter--do you have a trainer? Hope the first day went well.

A well deserved ice cream. A ride on a flat road is the best way to celebrate the last day before the start of the school.
Here the school begins today but only for the teachers and my wife is an elementary school teacher.

I'll miss reading about and seeing all the pictures from your long bike rides. Glad you were still able to get one last good bike ride in and the flooding didn't ruin it for you.

Wow it is still soooooo flooded that is crazy. Glad it didn't ruin your ride.

Welcome back to the daily grind, it's not fun but it's necessary to feed our hobbies right?!

I need to find an east coast texting buddy who will wake me up when I need to get up for morning workouts :).